The M3 is a 6.5" two-way with a 1" dome tweeter loaded by "a custom horn machined from acetal* to one micron tooling tolerance". Below it sits a rear-ported ceramic Accuton mid/woofer for 35Hz-18'500Hz bandwidth. The 3'400Hz filter has a compound 6dB+12dB electrical slope and 12dB+12dB acoustical function. The port is 17cm long. Sensitivity is a standard 88dB, nominal impedance 6Ω. Power handling is a high 200 watts and the elegantly veneered box measures 44 x 22 x 29.5cm HxWxD. The floorstanding bi-wired M1 instead uses quarter-wave tuning mated to a 33Hz port, a combo Alain calls TQWT/BR. The forthcoming M Zero flagship will be a 3-way with 30cm AudioTechnology woofer in a 4th-order symmetrically tuned bandpass chamber with 85Hz cut-off. That hands over to a 28cm dipole Supravox. On top an ESS AMT1 Heil tweeter loads into a dipole wave guide. That speaker will be 94dB sensitive.

* Acetal or polyoxymethylene aka POM is commonly known under DuPont's brand name of Delrin®, an engineering thermoplastic where two separate oxygen atoms single-bond to a central carbon atom for a general structure of R²C(OR')².

"There are many magical things about these Accuton drivers. They can sound dark or very very shiny. It's all up to the speaker designer's approach and taste. Fundamentally, our German ceramic drivers have one huge advantage. Due to the low resonance at the outer edge of their pass band, they operate as true pistons. The real challenge actually isn't whether the membrane is ceramic, diamond, beryllium, aluminium or bakelite. It's their surrounds that cause problems. One must know how to work around them."

"All tweeters without a wave guide have lobing functions relative to frequency. I've tested them all. With our horn's ellipsoidal profile, we only have one lobe and exactly the same energy across the entire pass band. The tweeter I developed isn't a standard soft dome though. Its membrane is polymer and the total moving mass is less than 0.12g. For a dynamic not ribbon driver, that's exceptionally low weight. The above screen shots were of its raw and smoothed response taken at four meters without a crossover on my ATB Pro."

Clearly Alain whom very few people in hifi know of does, himself, know a few things about loudspeaker design. No wonder Simon was keen on his designs.

"This graph shows not only linear response and phase but a clean impulse response without overshoot. Music is transient by nature. If the step response overshoots, a speaker can't be any good." 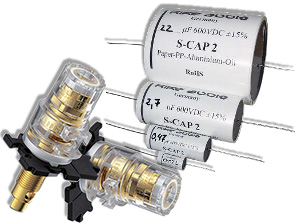 Like inspector Clouseau had the indefatigable Gilbert Ponton, Alain has Antoine Rouault.

"I've been making speakers for the last ten years and worked on Alain's speaker designs since 2016. I take care of all their manufacturing and shipping. I build the M3 cabinets from 21mm Finnish Birch ply which greatly limits resonances harmful to the sound. Bespoke filter parts come from Rike Audio of Germany, terminals from WBT and book-matched grain-oriented veneer options under polyurethane varnish are cherry, walnut, padouk and santos rosewood."

Alain again: "I'm packing up your pair and wanted to ask about the tweeter level. The Asians like it to measure flat which is to say, a little too present for my taste. Do you want the same thing or less which gives a deeper more natural relief? I have inside a very simple system for tuning the tweeter level." That was an unexpected but excellent question. Since I didn't know Alain's taste, I hadn't the faintest. I told him to surprise me. Simply knowing that this aspect can be tailored to a client's taste was a unique selling feature. In 20 years of reviewing, I'd never been asked before.