The 6moons Blue Moon Award is bestowed only on components or music releases of rare excellence. The following audio components were deemed outstanding for the specific reasons cited.

For English speakers not familiar with the colloquial phrase "Once in a Blue Moon", it connotes an event of considerable rarity, like finding a pearl inside an oyster. The actual occurrence in its original and proper meaning relates to the extra full moon in a quarter of the year when there are four full moons rather than the usual three. The division of the year into quarters for this purpose sets the dividing line between March 21 and March 22. This relates to the rule for setting the date for the Christian Holy Day of Easter. It depends on the last full moon (as calculated by a somewhat inaccurate formula) on or before the Equinox on March 21. This meaning of a blue moon was lost when the editors of the original Farmer's Almanac died. It was recovered only when researchers for Sky & Telescope magazine noticed that the Maine Farmer's Almanac from 1829 to 1937 reported blue moons that did not fit the meaning of the term calendar blue moon as has since become convention when people have taken to calling a full moon a blue moon based on the Gregorian calendar. By this use of the term, a blue moon is the second of two full moons to occur in the same calendar month. This definition of blue moon originated from a mistake in an article in the 1946 Sky & Telescope magazine, which failed in an attempt to infer the earlier definition used in the original Farmer's Almanac. It was helped to popularity when a Trivial Pursuit question used this as a source for one of its questions. Sky & Telescope discovered the error nearly 60 years later and the magazine printed a retraction and correction. But by the time the correction came about, the calendar definition had already come into common use. Because it is so much easier to understand, the mistaken calendar-based meaning has stuck. Regardless of these arcana, a blue moon sighting refers to something that doesn't happen very often – a perfect image for a selective award and a fitting tie-in to this site's lunar identity. To read the winning reviews, click on the respective links below. But first, a reason why you should: 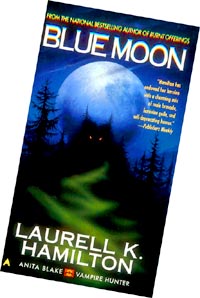 "Reading improves your vocabulary, Officer Maiden. You should try it sometime. Though I suppose you can get by with just looking at the pictures."

"If you cut us, do we not bleed?", Belisarius asked.

Maiden shocked the hell out of me by giving the next line: "If you tickle us, do we not laugh?"

He pulled a chain out of his pocket with keys on the end of it. "Don't tell the other cops. They'd think I was a sissy."

I looked up at him, all the way up at him. "It's not reading Shakespeare that makes you a sissy, Maiden. It's that damn gun. Only pansies carry that much hardware."

He unlocked the door at the end of the hallway. "Got to carry something big, Ms. Blake. Balances me out when I run."
[From Laurell K. Hamilton's Anita Blake, Vampire Hunter novel Blue Moon]