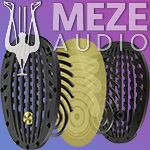 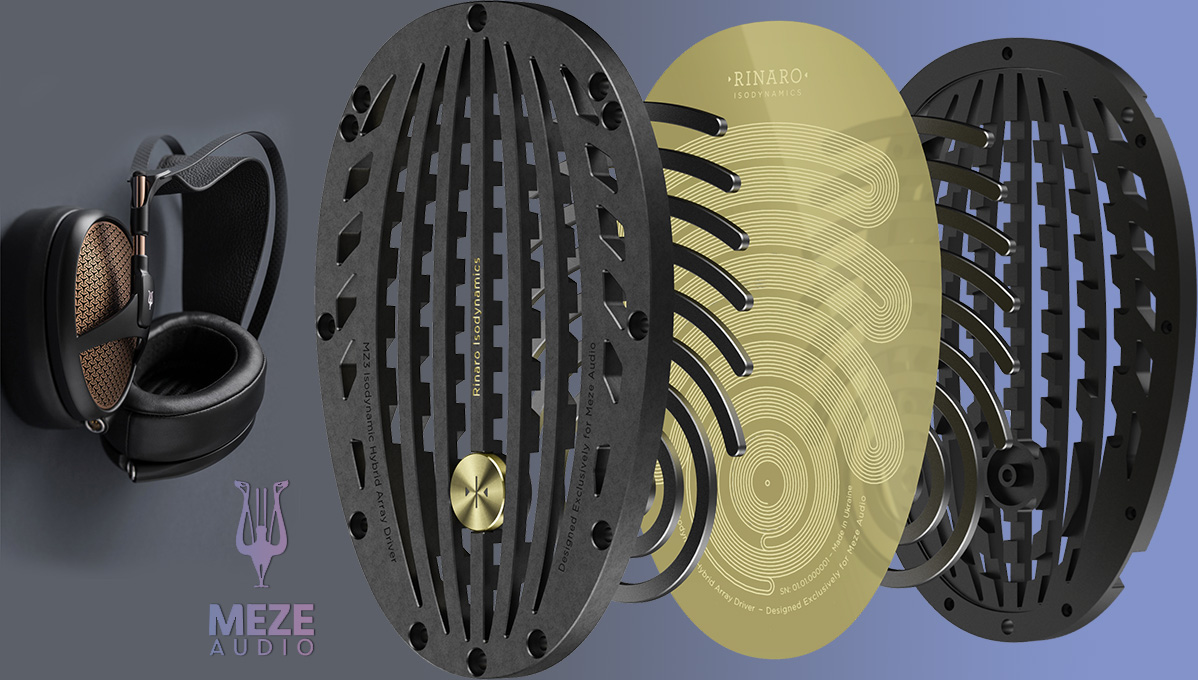 Hot butter down me belly. The HighEnd Munich 2018 show had come and gone. My report was live, I back to reviewing as usual. Then Raluca Vontea's email arrived. "Sorry to have missed you in Munich but thank you for our mention in your show recap. For us it was a great show and the Empyrean received a lot of positive attention and enthusiasm. We'll be in touch about the review unit. I'm expecting to have one June/July. Here at Meze, we really appreciate your work. It's the reason why you’re one of the reviewers who made the short list for Empyrean." My new press contact sure knew how to butter me up. Ahh. 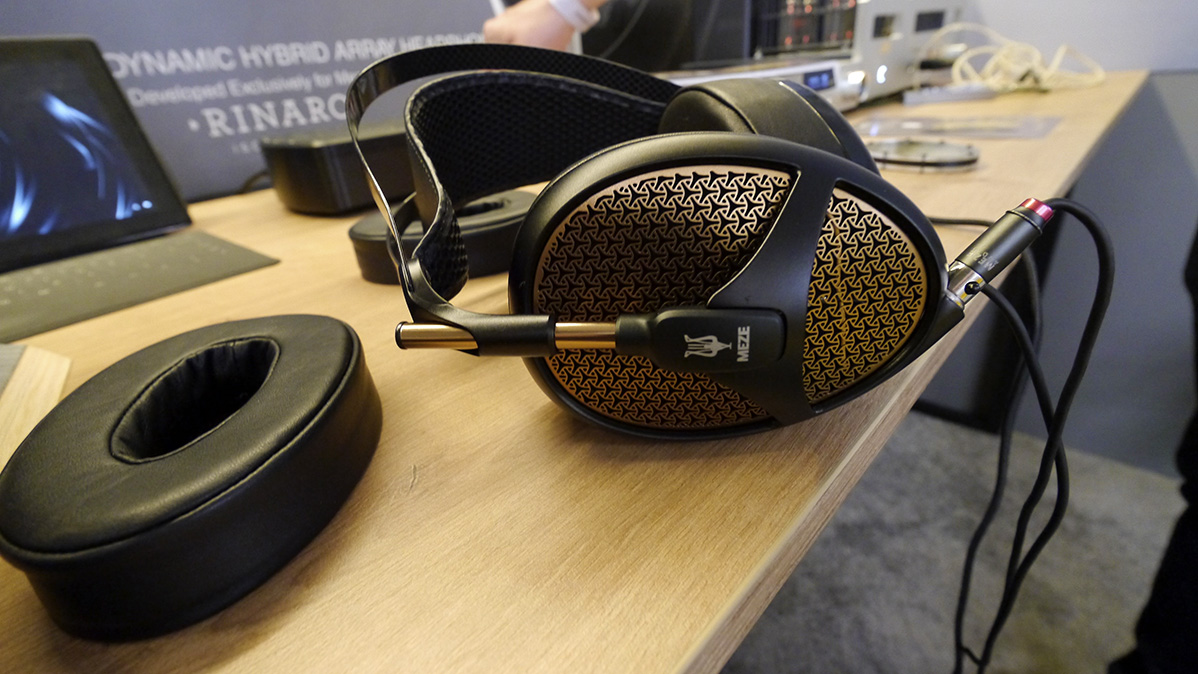 To recap my recap of the show, Romania's Meze had already made big waves with their universally loved 99 Classic and 99 Neo headphones. Last year, my then press contact had leaked word at the booth that Meze were working on a no-holds-barred flagship planar. This year Antonio Meze had brought pre-production units to their demo cabin [above]. Given unexpectedly affirmative action there and at earlier US reveals plus web-based teasers and blog chatter, his earlier sanction of a finite 500-unit run had already been lifted. The initial notion of a limited edition arose because the Empyrean would have to sell at ten times what the 99 Classic demands. That moves the firm from the regional heats straight to the global league with no stopover in-between. Fasten your seat belts. How many people would take that ride? Apparently well more than five-hundred. Vroom.

The backdrop banners of the Sound Days event in Paris illustrate the froggy leap from 99 Classic to Empyrean.

If you scroll back to the opening photo, you'll notice the imprint Rinaro isodynamics. That's because with his 30 years in OEM planarmagnetic design including for Oppo at a previously state-funded research facility in the Ukraine, Rinaro boss Pavlo Shymanovych here comes out with an openly credited no longer ghost-written collaboration. He contributed unique driver tech—this YouTube talk has the details—whilst Meze handled industrial/mechanical design of the machined frame/grill and carbon-fibre headband. Pavlo's continuous trace pattern on the diaphragm is distinguished by a serpentine upper and circular lower section with corresponding dual-sided magnet geometry. The larger switch-back section is more efficient at LF, the spiral more efficient at HF. Without any electrical crossover, this has the thin isotropic film with proprietary treatments behave like a quasi two-way with separate 'tweeter' and 'mid/woofer'. One advantage is that treble won't behave diffused to undermine 3D imaging. Its radiating surface was shrunk and moved down to sit directly at the entrance of the ear canal. This minimizes reflections from the ear pads as would be in effect were the entire film surface to reproduce HF as per usual. 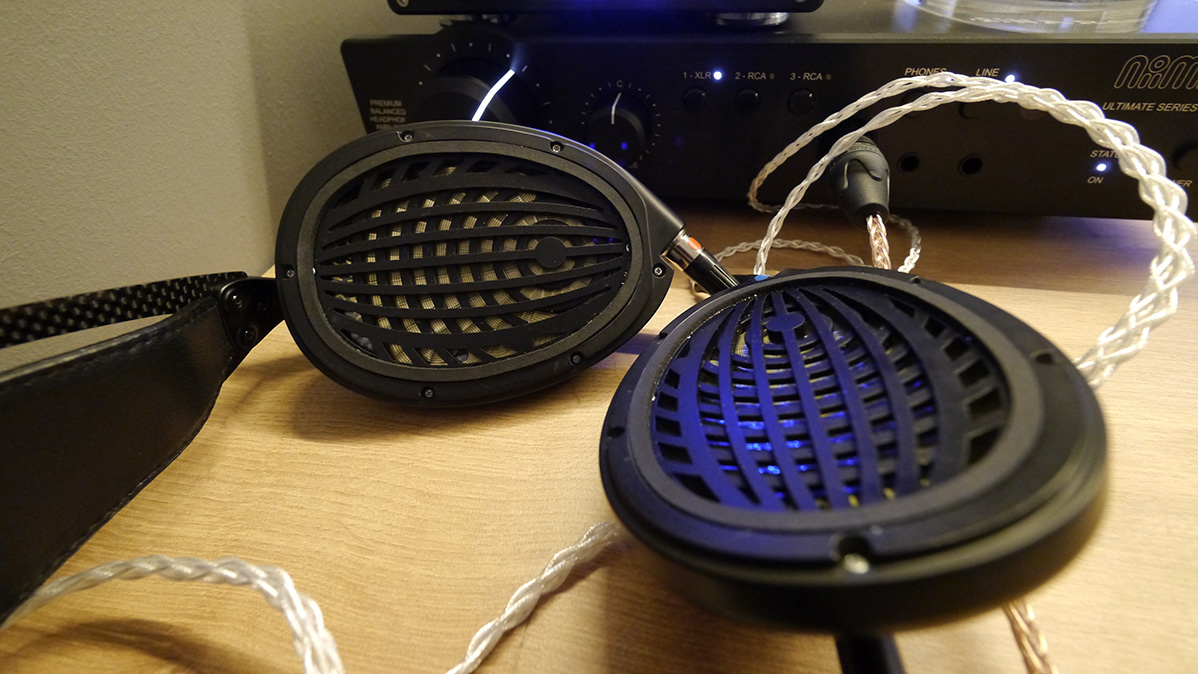 The custom membrane claims extension to 110'000Hz without sacrificing bass reach; and excellent self damping which reduces THD aka total harmonic distortion to 0.1% across the audible bandwidth. Cleverly, the stray field of the inner motor array affixes the interchangeable ear pads magnetically. That makes swaps a cinch and "increases driver efficiency by 12%" because this scheme pushes the stray-field force right back at the motor. The 67g/100dB driver and ear-pad solutions are patent pending. Combined with the mechanical design, the Empyrean comes in at 390g total weight. The unusually wavy headband with light embedded springs and bridge shape—also patent pending—enlarge the primary very sensitive contact point of the usual crown of the head to a larger area across the scull. This more effectively distributes the weight for higher wear comfort and promises a break from my Audeze-type experiences or the colossal 620g spec of the Abyss AB-1266 Phy.

At the show, Antonio trialled three different ear pads. Production would include two. He confessed to quickly learning that audiophiles don't actually favour a perfectly flat response. Rather, they fancy a more contoured "fun" voicing as he called it. Not knowing which pad did what by just pointing at their favourite out of the three, for most booth visitors that game was up. 'Fidelity' or the abstraction of any absolute sound are routinely just lip service or deluded notions when (gasp!) self pleasuring is the real reason why people listen to music. In case you didn't know, changing ear pads is like changing rooms with loudspeakers. Ear pads can be bigger or smaller, deeper or shallower, leaky or reflective, damped or energetic. All of it affects response and gestalt in various ways. Particularly when magnetized, rolling pads is arguably the easiest way for an end user to change a headphone's voicing; easier even than swapping out a cable harness. 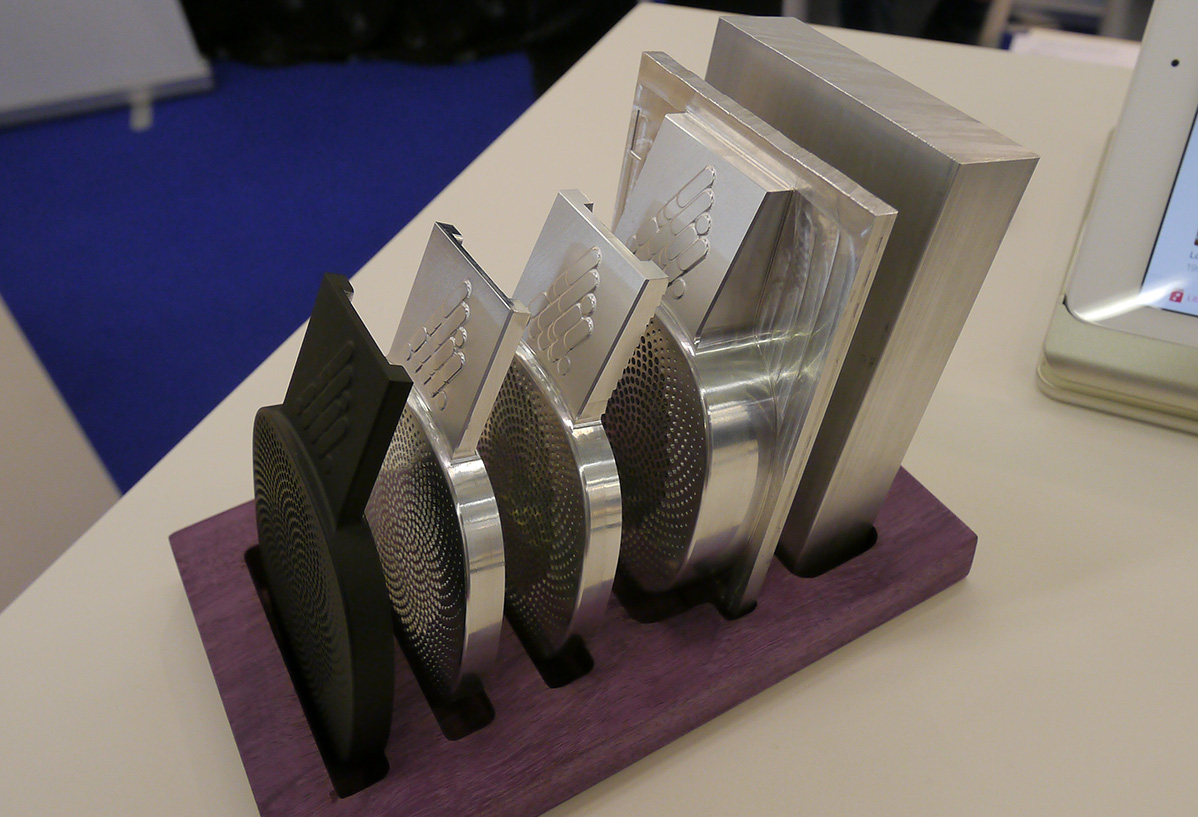 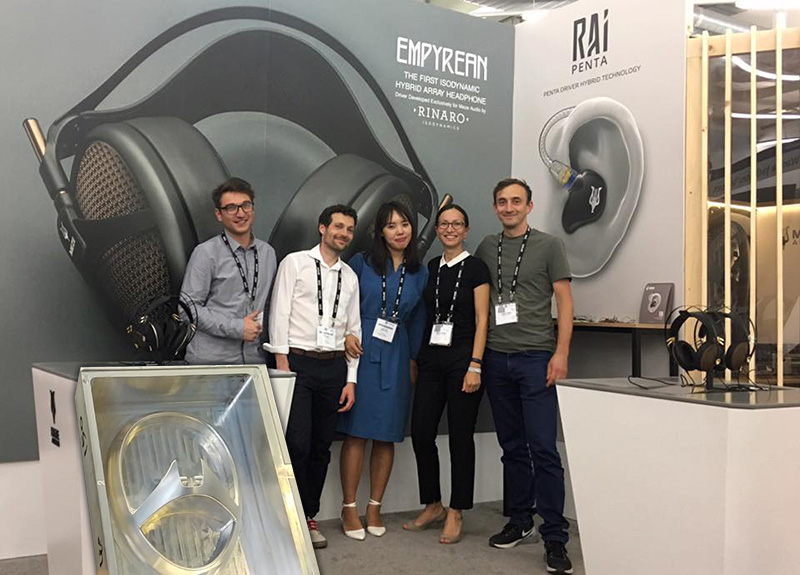 Like Abyss do for their Diana headphone above, Meze machine their complex grill/frame from solid aluminium [overlay at right]. Antonio explained that grill experiments with etching foil lacked the desired precision.

That had him return to the costlier lengthier process of whittling down solid metal stock to the final thickness and perf pattern. Amongst other things, it explains why, again like the Abyss, pricing had to be >€3'000.

Moulded plastic for large production runs could be sold a lot cheaper but also would be cheap plastic – not acceptable for a flagship effort named after God's own dwelling place or the highest heaven from the Medieval Latin empyreus.

Because Antonio [far right in the team Meze photo] ended up loving so many of the anodizing hues which they experimented with, he decided to revisit the limited edition notion not in terms of total units made but colour batches.

Each particular tint will be limited to a certain number before another one is introduced and so forth.

This decision illustrates Antonio's nature as a clearly gifted designer. To all the many technical and practical elements required, he always challenges himself to add an obviously artistic expression which makes his final products far more than just prosaic sound appliances.

In a very real sense, the two-year process of developing the Empyrean was as much art project as it was a journey into proprietary technology. By extension, owners will acquire not just a headphone but a wearable piece of art.