This sound|kaos already looks interesting. Each is made of solid walnut or cherry. That undergoes oil 'n' wax therapy but can also be had in clear gloss or painted to order. Its forehead features an upscale widebander with bronze basket and small logo below. How this baffle gently slopes to connect with the base differentiates Martin's design from the industry's rectangular standard. Each cheek holds a woofer behind a bronze mesh grill. Its rubber retainer ring locks into the recess around that driver. A top-mounted Raal ribbon in a custom 2mm bronze plate fires up to extend the brilliance range and boost ambience by turning your room's ceiling into an omni diffuser. The business end features a petite slot port tuned to 35Hz and just a hair above it a bronze nameplate with ETI's top Kryo binding posts. 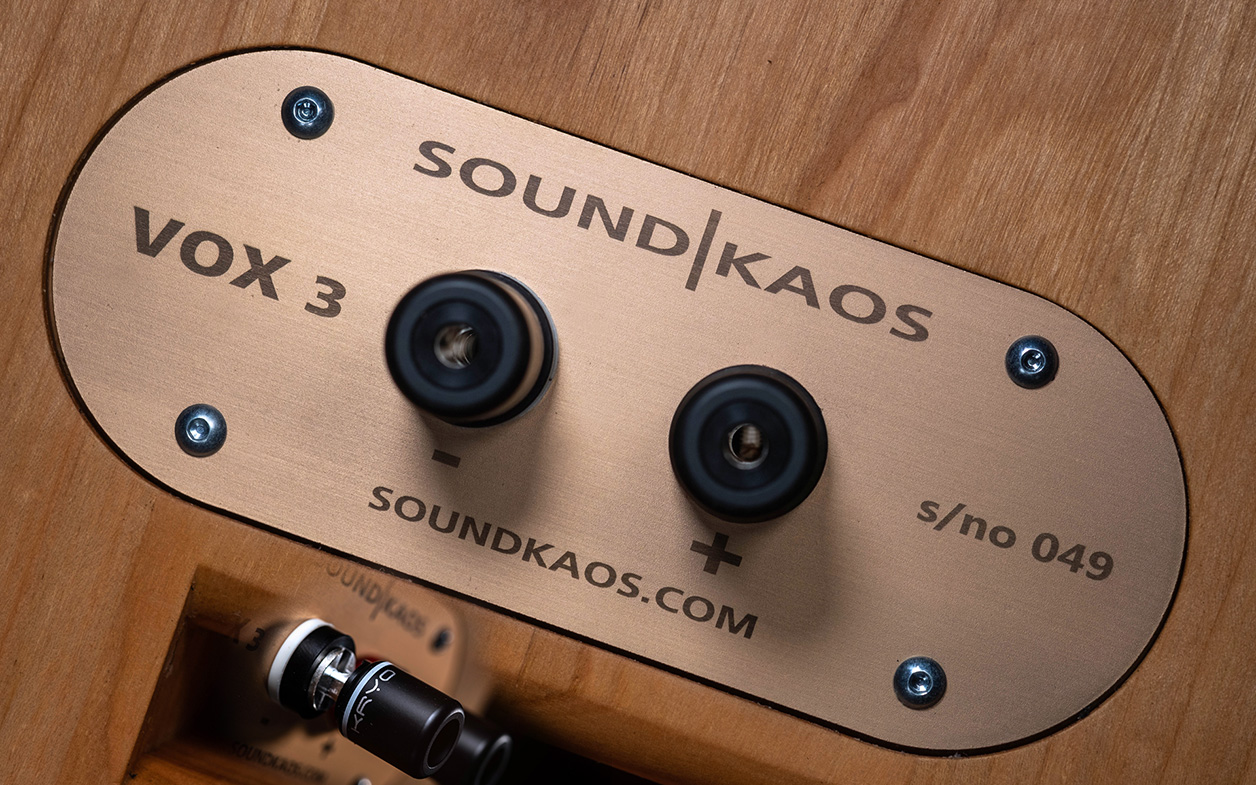 The Vox 3afw's specs remind us. Martin wanted high sensitivity to welcome low-powered amps and sufficient bandwidth to require no sub. That wouldn't be unusual for his bigger models. With anything as small as the Vox and bass extended this generously, one expects low ~84dB sensitivity instead. One challenge thus was how to cover such mutually exclusive bases in a cabinet this tiny. To answer how it came off, we need to look closer at certain measures and the people Martin works with. His first speaker, the Wave 40, featured a sophisticated custom-made 8" widebander developed by Armin Galm under his side business Enviée. It marked their commercial debut and turned out so well that both men have worked together since. When it's time to measure, design and analyze an entire project, Chris Ellis of the UK's CE Electro-Acoustics is Martin's go-to man. Meanwhile all sound|kaos woodwork goes to Simon Oehrli and his famous Wagnerei Oehrli mill in Switzerland.

Thus four individuals cooperate across Switzerland, Germany and England. The big picture is always in Martin's mind. Then come dedication and willingness to dispatch prototypes to specialists back and forth, gather feedback, overcome obstacles, change and tweak to reach perfection. This process is lengthy and costly; even more so in Swiss currency. Although a Vox 3 is petite, each houses four transducers. Most speaker houses rely on off-the-shelf drivers but today's are either customized or designed from scratch. Galm Audio's side-firing 5"/130mm woofers on a 2nd order slope at 200Hz sport carbon-fiber membranes, neodymium magnets and 37mm voice coils. At 84dB efficiency, running two of them horizontally opposed for mechanical force cancelling creates 6dB of gain. The key difference between 3f and 3a is the widebander. The more affordable unit gets a 4"/100mm TangBand, the costlier one Armin's 4.3"/110mm Enviée. The latter's CNC-milled bronze basket alone would set one back more than the entire TangBand driver. Likewise for Alnico magnetics. Although several times dearer than ferrite or neodymium, this alloy nets a richer more fluid sound. The whizzer-less Enviée features a nylon phase plug, paper cone and corrugated surround. By increasing the membrane diameter by 0.3" over the equivalent TangBand and losing the latter's synthetic surround, there's no 1.5-2kHz dip so typical for 4-inchers. The 3a's widebander runs fully open at the bottom but with a single cap is low-passed at 10kHz on another 2nd-order slope to hand over to Raal's upfiring ribbon tweeter.

The latter's efficiency is adjusted at the Serbian factory to eliminate the need for shelving resistors. Each 6.5-liter cab contains two inner chambers. The smaller 1.1l one is sealed to accommodate just the widebander and a modest amount of lamb's wool. The two woofers, crossover, tweeter and several aramid honeycomb dampers share the larger 5.4l space. Although the crossover isn't visible, it includes three very costly Jantzen Audio Amber Z-Cap 3.3/6.8uF parts to reflect Martin's no-compromise attitude. Google these caps then do the math. Cue major head scratching. 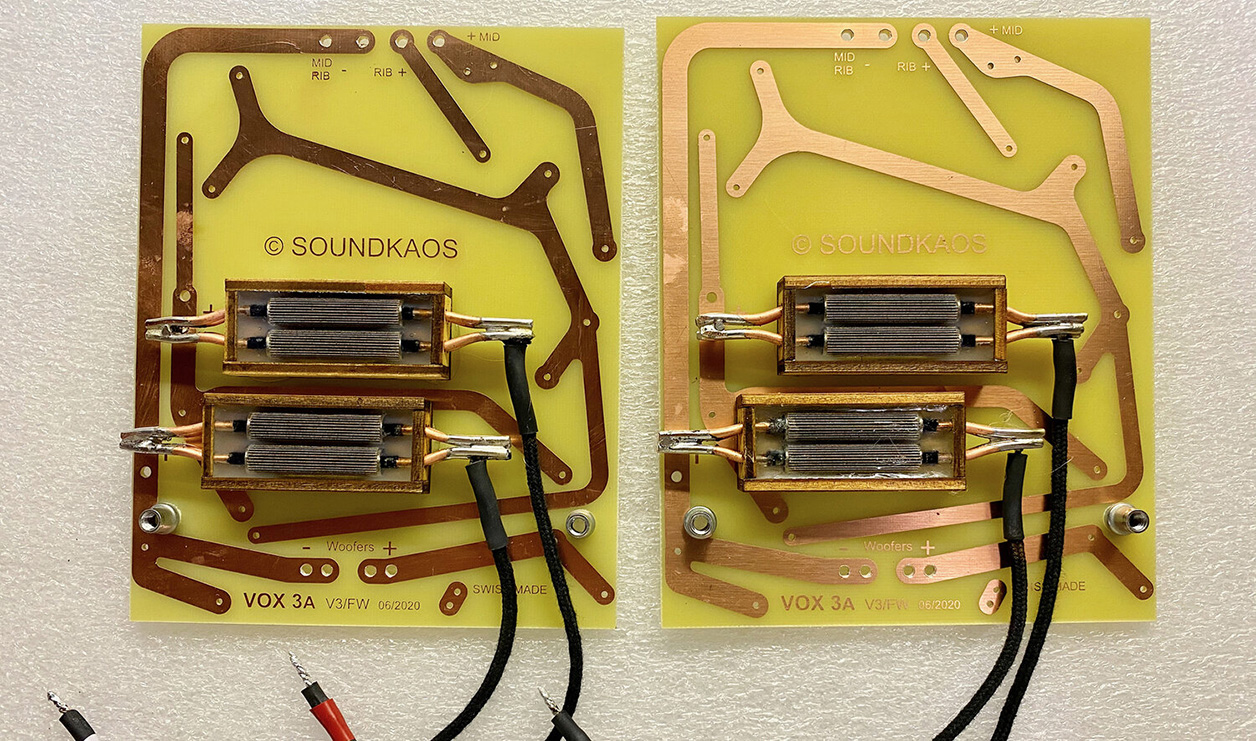