… the Dp5 network player. S.M.S.L here aim at high value with the refined build and aesthetics of the M400. For DAC processing, S.M.S.L. opted for the ESS 9038Pro currently fashionable with its impressive specs of 130dB SN/R and -122dB THD+N. It supports full MQA decoding through a wider array of inputs than the M400 plus DSD256 and 384kHz PCM. Filtering is fixed for optimum performance. With major processing power and functional versatility under the hood, the Dp5 promises major potential. It is however built to an aggressive price point and consequently must reflect skillful compromises. Where the M400 boasts more premium parts, the Dp5 concentrates its promotion on emphasizing superior versatility and the fundamentals of reliable file management. To keep it all organized, the Dp5 goes basic, utilizing a folder-tree interface which opens a series of menus and sub menus accessible by front panel buttons and multi-function volume dial as monitored over its 3.5" screen. Although it lacks the slickness of dedicated control apps such as iPeng or Lightning, it does guarantee accessible and reliable operation.

The main page gives a choice of six menus for setup and playback options. Once basic setup is accomplished in the system and network menus, only the My Music or File Browser menus will see routine service to access playback. The Playback menu options are only valid for internal micro SD card storage. File Browsing allows access to available folders and categorizes them into 3 subsets, internal micro SD card, LAN folders for network drives and USB-based drives. The Explorer tree menus provide further access to sub categories to search by album and song. While it's a little rudimentary, it's comprehensive and intuitive.

My Music had the more direct and familiar library management by album, artist, song and genre, making playback selection considerably simpler. However, this more ergonomic interface only works with the internal micro SD card and USB-connected libraries, not network storage. The Dp5 allows for automatic updating of music stored on SD card and manual scanning for USB drives through an associated menu in System Settings. Song scans up to 30'000. In practice, the procedure worked reliably for all storage except my 2TB external hard drive. That crashed the memory. The fault here probably came down to the file structure on my external hard drive. It's not configured as simple music file storage but rather around the structural protocols of my Wyred4Sound and Auralic network drives. 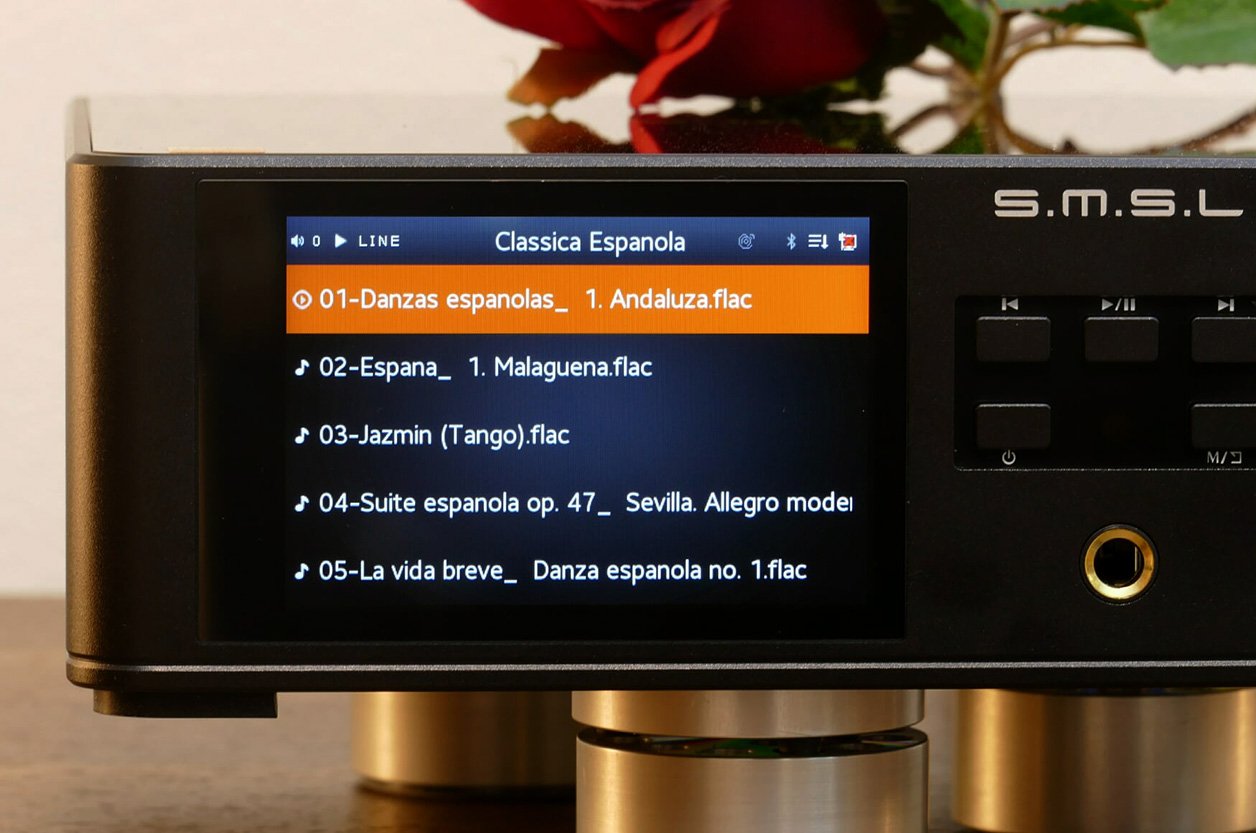 To facilitate remote operation, the S.M.S.L. accepts several commands. One is the supplied remote. It delivers basic power and volume control and steps through the display menu options for music selection and system adjustments. Another is to download the HiBy Player app. This allows interactive music control by smartphone/tablet over Bluetooth and operates the Dp5's onboard software by scanning accessible drives in similar Explorer tree fashion. For the most part it worked flawlessly, relieving me of trying to read the Dp5's small screen from my seat. I did encountered a  few limitations with the app which may be unique to me. It failed to see any network drive or to provide cover art although cover art capability is indicated in the setup menu. Beyond that, HiBy managed to read all other available drives and hit best management refinement with the internal micro SD card and USB connected drives by offering more GUI-friendly album, artist and song functionality in parallel to the Dp5's My Music menu. The welcome third control option is Roon. S.M.S.L. indicate that the Dp5 is Roon compatible which should offer a more comprehensive experience. Since Roon is not part of my current setup, I was not able to test this. For tutorials on how to use the Dp5 with Roon and HiBy, S.M.S.L. have thoughtfully made available several YouTube video links here.