Then and now. If one grows not just gets old, some extra weight and gray should accompany greater maturity, clarity and profundity. More superficial egoic obsessions of youth will have weathered into more universal concerns. All of it applied to contrasting Simon's earlier Stello MkII separates against his latest integrated. Though clearly informed by the same sonic priorities to continue a very familiar aesthetic, the i5 was the weightier, richer, more burnished. With accepted traffic code of green for go and red for stop, the green-lit i5 moved ahead of the red-lit twins. Current owners of the April Music compacts won't feel a need to change. Given inevitable losses of selling used and buying new, the difference won't seem big enough. But someone not invested, upon hearing either, will pronounce the newer Simon Audio piece the… well, older more mature weightier richer performer. Clearly Simon's aural sensibilities haven't just gotten older. They've also grown deeper. One does lose a very basic USB input and the ¼" headphone port but also sheds one extra box and power cord. In my book it'd be a fair trade indeed. 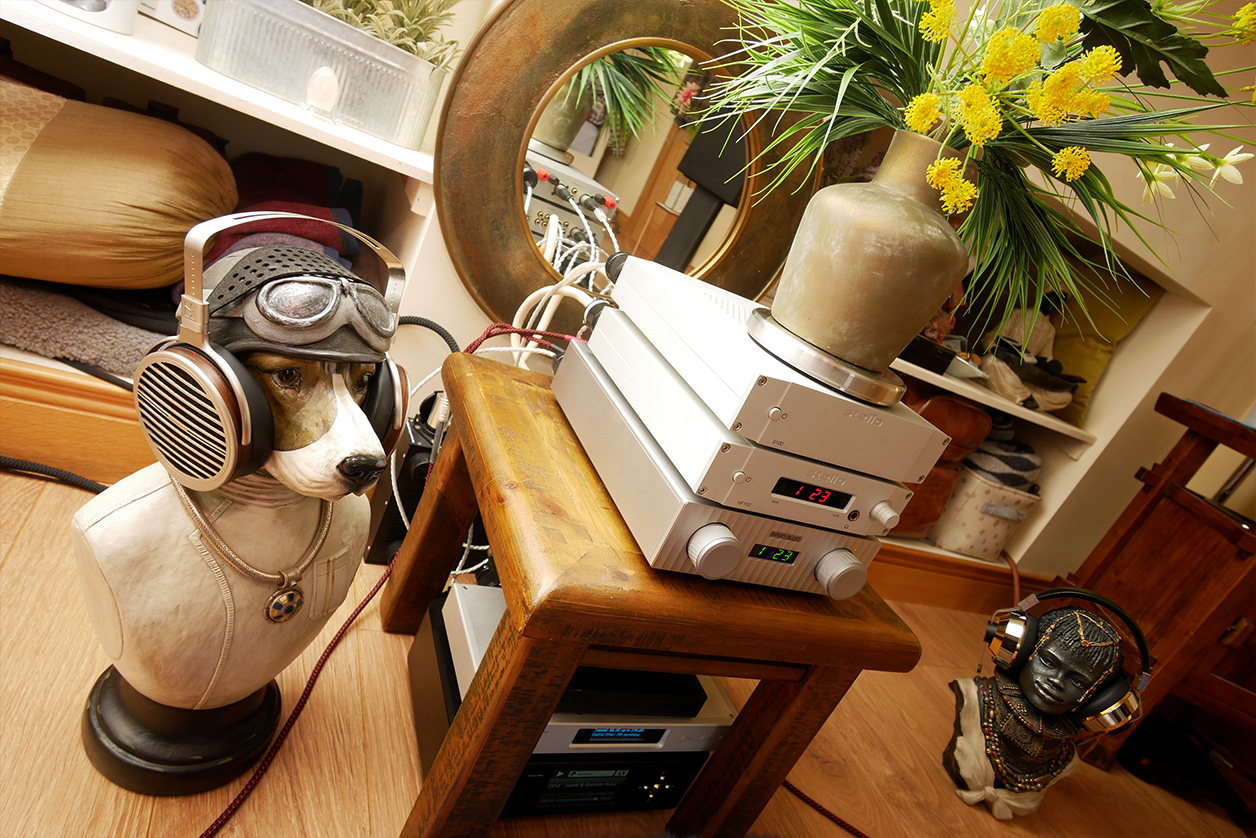 In the bigger downstairs room, the i5/M3 combo with Simon's wiry speaker cable designed by Alain Pratali showed off now familiar strengths. One signature number for those was the title track of Sary & Ayad Khalife's Soobia, an Arabian/classical chamber music meditation on the piano and cello. Now benefiting from a rather higher-end source (Soundaware D300Ref reclocker I²S-over-HDMI into the discrete R2R Denafrips Terminator DAC with 1'411.2kHz 32 x upsamper), the small Simon Audio amp squatting atop the massive Pass Labs XA-30.8 readily refined tone/texture sophistication over the far more basic upstairs system. What had been thicker and less articulate now displayed more speed and insight yet still romanced the concert piano and singing cello. Without having heard the CDA5 to know how it ranks, my personal takeaway was this: the i5 scaled up noticeably with a source that was well in excess of its own ask

Despite a now 5m x 10m space—the wall behind the chair is another 5 meters removed—I didn't crack the 25 loudness threshold on the i5's display. Once again more than half the tank remained full. For what offenses to good ear health, I don't know. 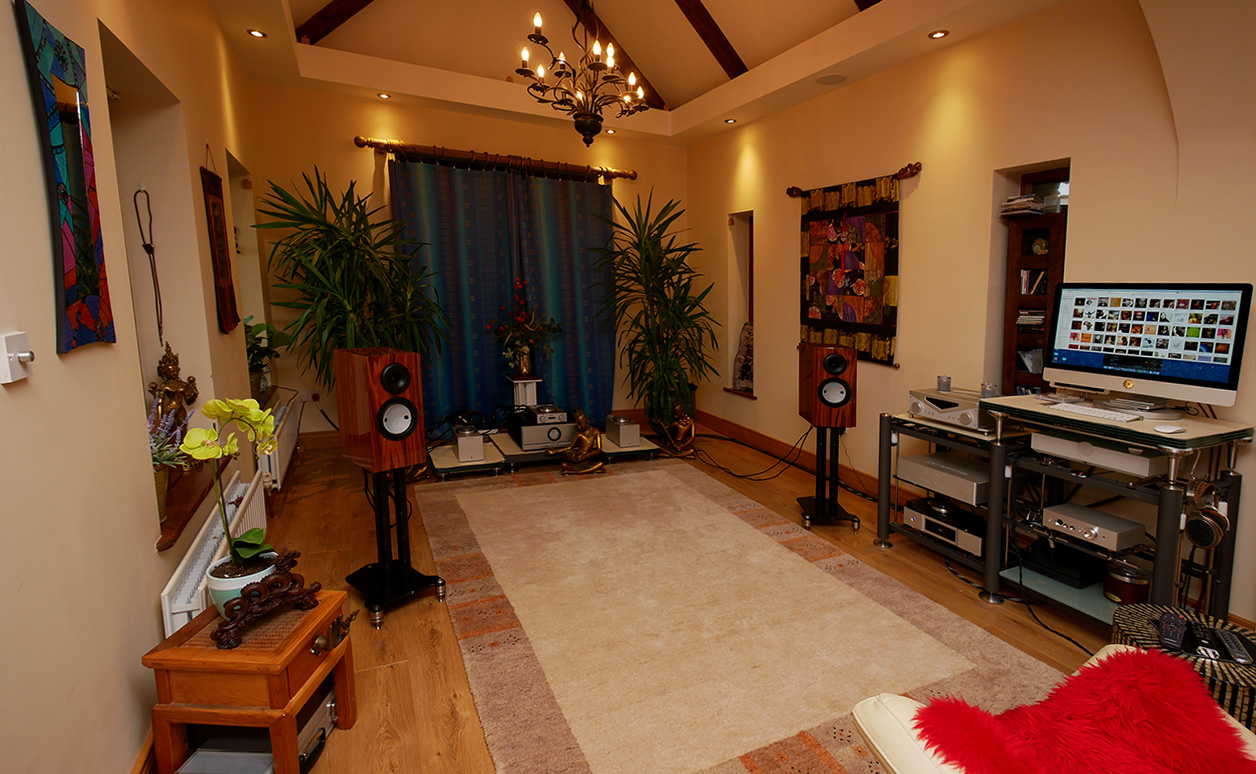 The ambient lighting and camera exposure reflect the color saturation of the sonics.

This should really upset shoppers whom salesmen have convinced that real power lives north of 200 watts a side. For the purposes of a home not stadium rig, the i5's reserves were as real(istic) as they had to be. Time for meaner 4-way towers.

Our Audio Physic Codex volume sat within 5 clicks of the M3. The Germans had zero issues with getting big and bombastic. At SPL beyond my comfort zone, a bit of hardness and glare crept in. This doesn't happen with our LinnenberG Liszt monos preceded by boutique direct-heated triodes in our Vinnie Rossi preamplifier. Touché. At regular domestic SPL, I only heard a slight intrusion of that faux reverb haze or motion blur which our usual hardware doesn't produce. Once again I suspected Burson's Classic as the effect's main producer or at least facilitator. But that was being fussy at a high level. The kit which the i5 replaced sells for exactly ten times more. En-garde. Just so, it's fair to say that the i5 will be at its best when its loads get less complex. Hello M3 and M1. Shy of ridiculous, room size won't be a consideration. 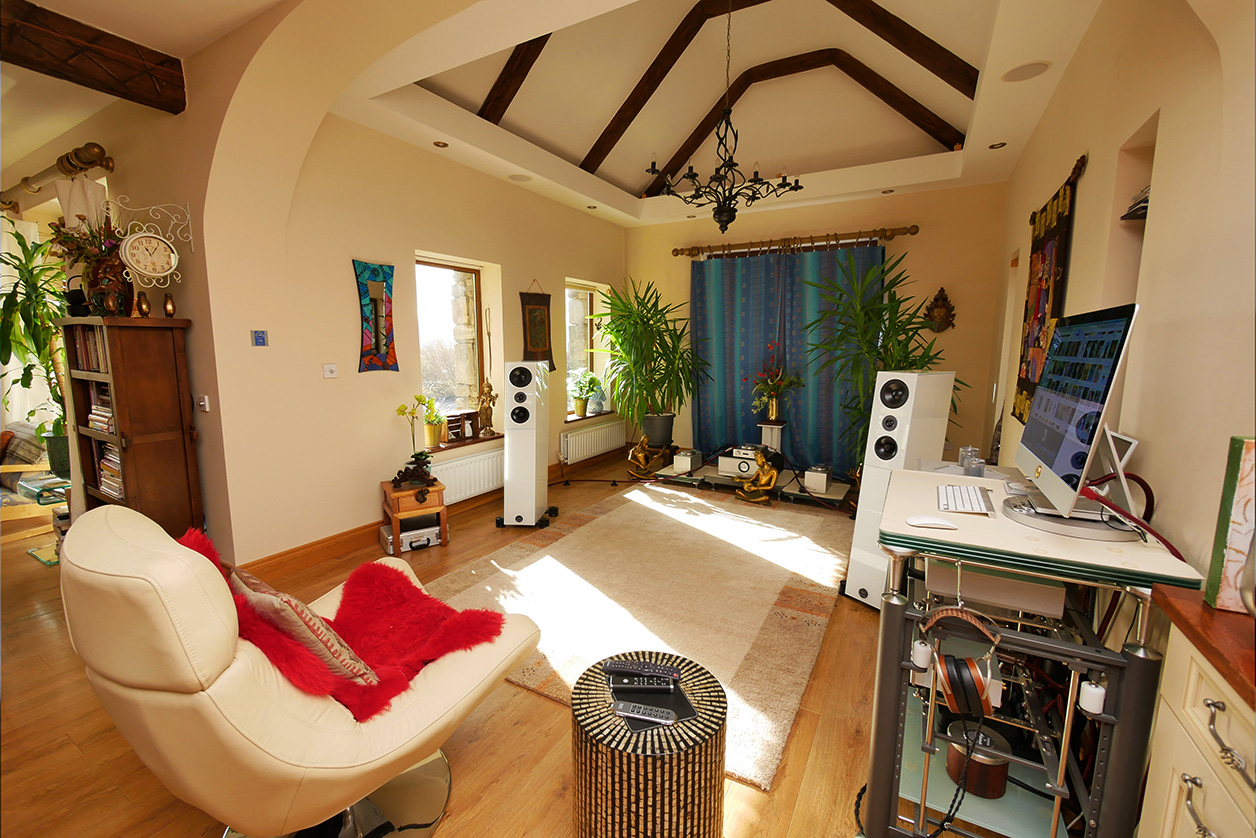 This ambient lighting and camera exposure reflect the color saturation of the sonics which included a lot more white than the M3 combo.

"The invoice, please!" Some inspect their dinner invoice closely. They tick off all they've eaten to not be overcharged. For today's musical meal, they'd appreciate unusually generous portions for the tone, texture and bass mains. For desert came great looks and fine build. Drinks were the remote's ability to black out the display, the XLR inputs for balanced sources and the pre-outs to loop in a subwoofer. That's an ideal upgrade path for small speakers. Our Bakoon and Kinki integrateds sadly lack it. So the final i5 bill feels fair. Well-informed listeners should wish to come back to Simon's hifi joint. Their M3 monitor in particular is a serious recommendation to try on the next visit. With the i5 it makes for a wonderfully upscale experience that's a most apartment-friendly combination. 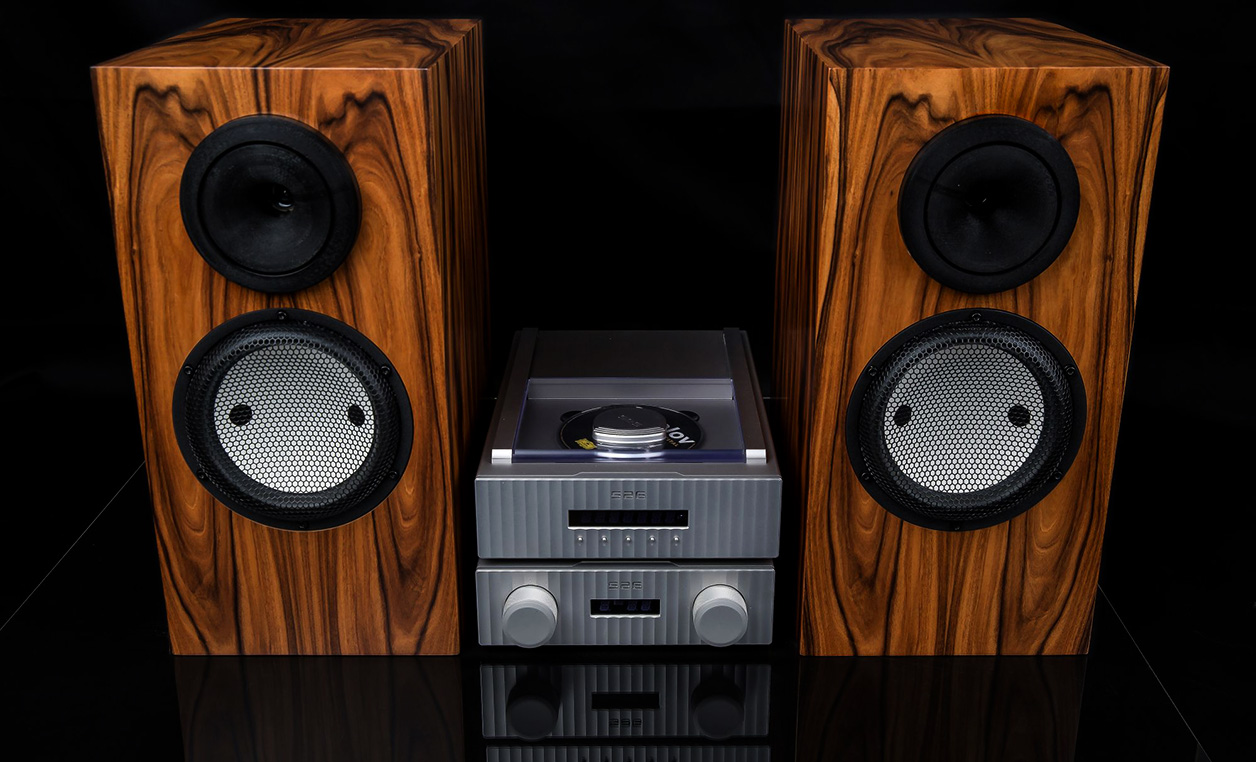 Where other blacked-out displays revive when receiving a remote command, Simon's remains dark. If you want to see volume changes in dark mode, you must reactivate the display on the remote, then dim it again.

Final wrinkles? Those would be Burson's V6 opamps. The ±16.5V/14mA dual Classic/Vivid options use TKD metal-film resistors and 2-stage Toshiba 2SK170 Fets. They're discrete circuits in a chimney-style form factor made swappable with eight pins and a matching dip socket. Think of transistorized valve pins and tube sockets. Like valves, opamps are directional. A marker indicates correct orientation – the round recess of the base. Burson's graphs show how four different hifi aspects rate between these two opamps. The Vivid scores higher on transparency and dynamics, the Classic higher on color and texture. I already knew these descriptions to be factual. My question was on the magnitude of difference in Simon's circuit.

Quite pronounced. With Vivid, fundamentals and overtones in the 3-6kHz band came up some but the brilliance region still was dimmer than competing circuits do it. The overall sound became a bit fresher, more angular and quick. Alas, it also lost that special 'Simon sez' sauce. Whilst I could hear what the red chimneys 'improved' from a hifi perspective, I also noted how they diluted that carefully cultivated flavor which the orange bits had installed. It was easy enough to revert. Different tastes/speakers will respond differently. That makes this a special feature. Overall however, I sided with Simon's choice. The vitamin C of les oranges had it. 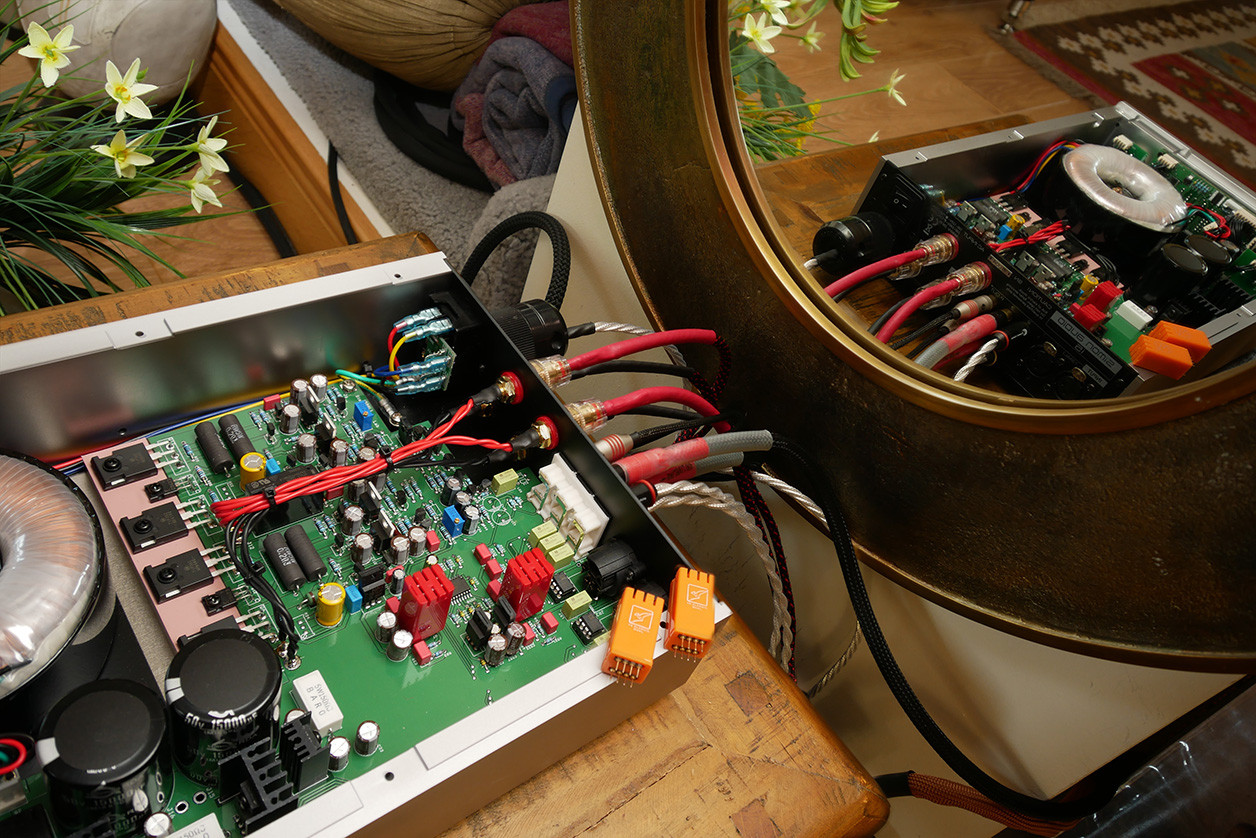 Final words. As Mr. Lee aimed for in the intro, his i5 integrated is indeed all the amplifier most people will ever need. From seemingly simple ingredients, he has quite masterfully groomed into a whole a very mature non-flashy sound that's all about the flesh and blood of the music, not its white bones. That it also looks and feels the posh part is extra.

From Seoul with soul? You bet.