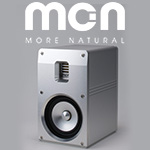 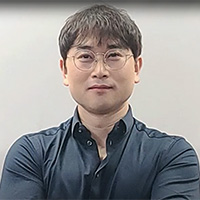 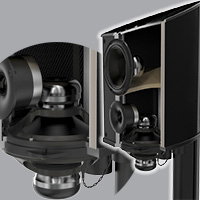 Mon on the moons. The slogan of today's direct-selling South Korean company is more natural premium sound. Mon is a contraction of more natural. Their smallest and newest transducer is the below very cute €2K/pr SuperMon Mini with clear-anodized or lilac baffle. It's a 4" 2.5-way ultra compact with custom AMT tweeter in a box of 6601 aluminium. Because its tweeter enters at 6.8kHz to merely cover upper harmonics, the visible Mark Audio driver works as a widebander. That's assisted across its low end by an invisible inner driver which, similar to the Wilson-Benesch Discovery II monitor at right, calls itself an isobaric alignment.

The usual reason for such an array is cabinet shrinkage vs. what a single woofer needs for equivalent reach. Bandwidth claims to be 65Hz-25kHz with dimensions of only 4.7 x 8.2 x 6.7" (12 x 17 x 21cm) so the face plate equals an A4 sheet of paper in landscape mode narrowed to ~1/3rd width. Weight is 11.5lb/5.2kg. Relative to size, claimed sensitivity of 88dB is high even if referenced against 4Ω. To drive home how petite SMM is versus the stable's two bigger models… 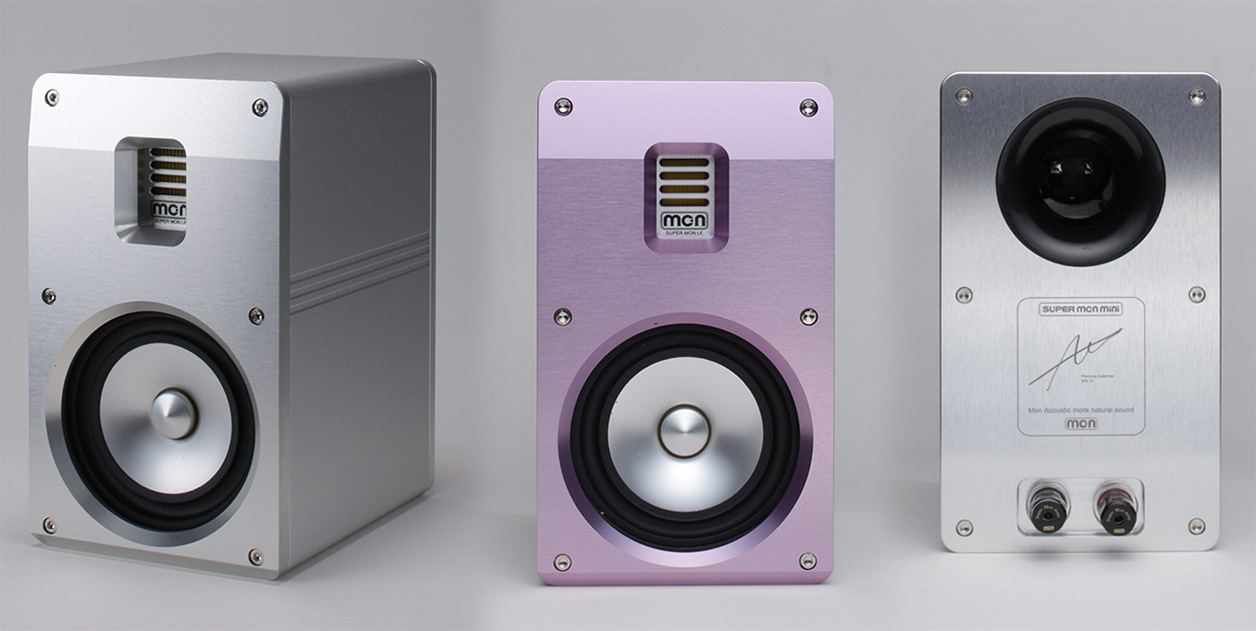 … this photo tells all. Its size recalls Onkyo's original D-TK10 then Toru Hara's derivative HB-1 for Kiso Acoustics though both executed in tone wood à la Takamine guitars not metal.

That MonAcoustic of Daegu nurse a still heavier metal urge becomes apparent with their matching integrated machined from solid billet. As Goldmund's presence in South Korean luxury malls has shown, clear-anodized aluminium with gold-colored accents is super popular in that market.

Isobaric 2.5-way faring also factors with MonAcoustic's bigger monitor. At 80lbs for the box, 62lbs for its matching stand and a combined €25K sticker, now we play in the super high-mass hi-class league à la Magico, Stenheim and YG. The Mini would keep my back and that of our local UPS driver rather happier. Yet as my go-between said, Mon wanted the Supermon Isobaric reviewed. 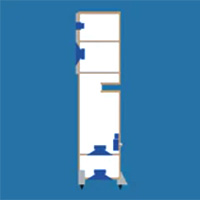 That combines a Dr. K. Müller-made T35 soft dome tweeter with underhung 35mm copper-clad aluminium voice coil and Alnico motor with a 6-inch AudioTechnology 6A77 mid/woofer of 34Hz resonant frequency and 3" voice coil as made famous by the legendary Sonus faber Extreme. It couples to an 8-inch Eton 8-21 dedicated woofer from their Symphony II range. The speaker's massive 606 aluminium enclosure with high rear port can finish in clear-anodized, black, red, royal navy or—for a surcharge—in a bespoke color. Now bandwidth becomes 37Hz-25kHz with 89dB/4Ω sensitivity and dims of 9.7 x 16.5 x 19.7".

Still have questions? So do I. The UK remains fond of isobarics. At left is a cutaway for Neat's Eksta described as a 2½-way ported version. Kudos, Linn and Wilson-Benesch make their own. In the US, Gingko Audio still stagger two 6.5" drivers inside a sealed tube. In Canada, Totem Acoustics' Mani-2 ran two isobaric Dynaudio woofers magnet to magnet. The general idea dates back to the 1950s and Harry F. Olson. Wikipedia sums it up as "systems in which two or more identical woofers operate simultaneously with a common body of enclosed air adjoining a side of each diaphragm. They're most often used to improve low-end response. The name derives from isobar for equal pressure and the enclosed air does indeed experience roughly equal pressures from each diaphragm it contacts but those forces are parallel not opposing to force air to move." Unlike Neat, MonAcoustic for their bigger monitor execute the concept with dissimilar woofers across dissimilar bandwidths. How that jives with Olson's isobaric concept I couldn't say. Having designed various isobaric Linn speakers, Dr. Rod Crawford at Legend Acoustics has experience with the breed. "The term equal pressure is actually a misnomer. A better description is that two closely coupled woofers have twice the mass so lower their resonant frequency by about 40%. The double magnets of isobaric loading can also give higher damping to make bass stop and start more quickly." Readers with good memory will remember a compact floorstander from Noble & Noble which physically coupled its two mid/woofers by metal pipe then ported them out the rear. Whilst it suggested an isobaric wrinkle, its designer was quick to disabuse us of said notion. Surely today's designer Jun-hyeok Seo—aka Jazzman on Cafe Naver who calls his favorite driver the Seas Exotic W8 Alnico-powered papyrus cone he uses in his d'Appolito floorstanding Ghost Platinum—can still give us more insight into his particular execution.