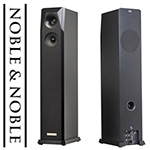 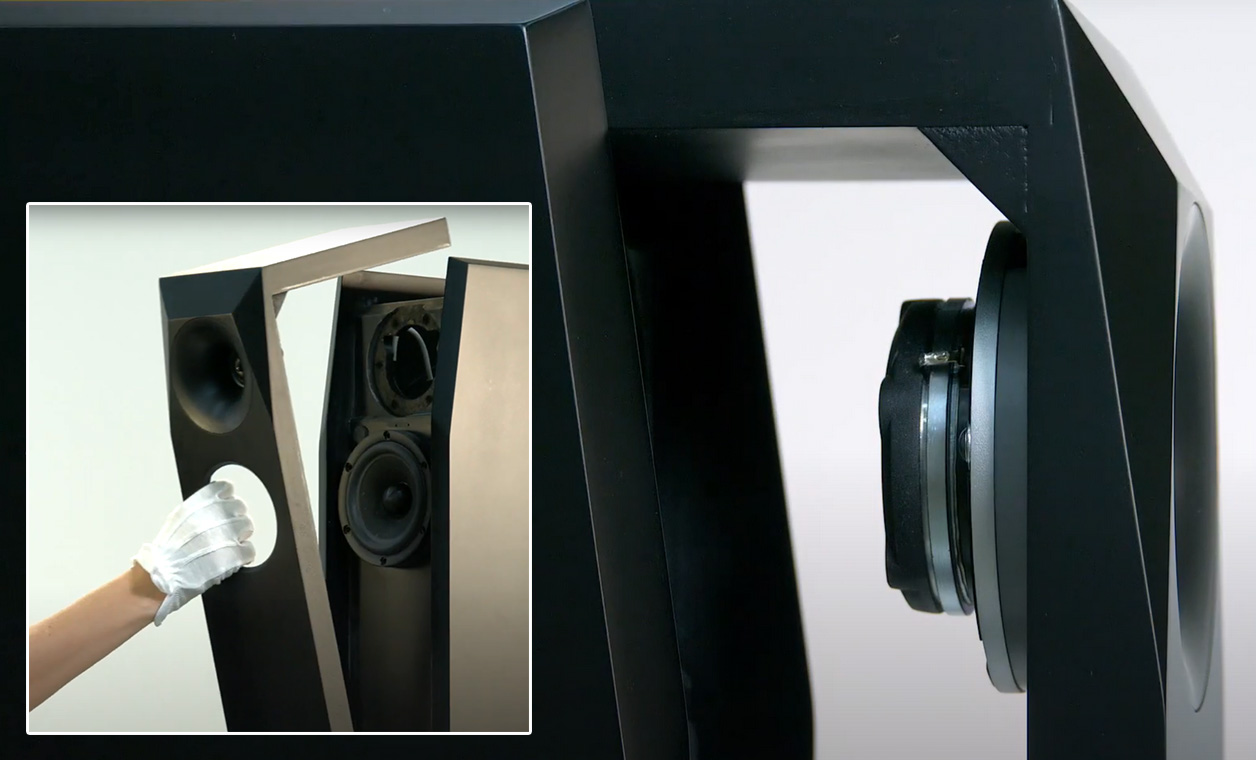 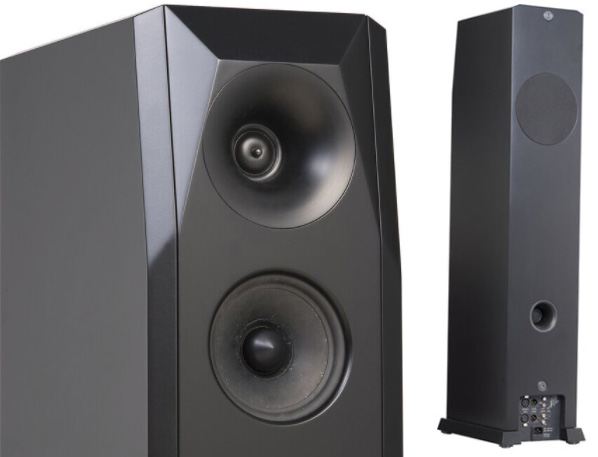 Of course sticking a few drivers into a 98x18x20cm 22.8kg rear-ported box with OEM electronics isn't yet the height of sophistication. That's true even if the designer must still program the off-the-shelf DSP to the desired target response relative to the chosen drivers' native behavior.

So Noble & Noble add a number of mechanical tricks to their box. Those aren't apparent to the eye. Take a look at the next graphics. There's what looks like but isn't an isobaric¹ mid/woofer behind the first. These two drivers couple to each other via damped metal pipe with rubber ends. The cabinet behind the inner driver is open in the back for mechanical decompression and no time-delayed reflections from inside the box back out through the cones.

If the drivers wired in phase, we'd get dipole dispersion to expect some useful out-of-phase nulls on either side of the box. But the rod coupling would cause mechanical reinforcement not cancellation. The latter relies on equal but opposing forces to null. So our drivers must wire in opposite phase for bipole radiation and mechanical resonance attenuation aka force cancellation. More on that later.

¹ Championed by Linn, Neat and Wilson Benesch, isobaric drive doubles output which amounts to halving enclosure size for a given SPL. "The isobaric speaker was first introduced by Harry F. Olson in the early 1950s. It refers to systems in which two or more identical woofers operate simultaneously within a common body of enclosed air adjoining one side of each diaphragm. In practical applications they're most often used to improve low-end response without increasing cabinet size." The isobaric principle doesn't apply to the 98 but makes a useful example for looking like one thing whilst being another. 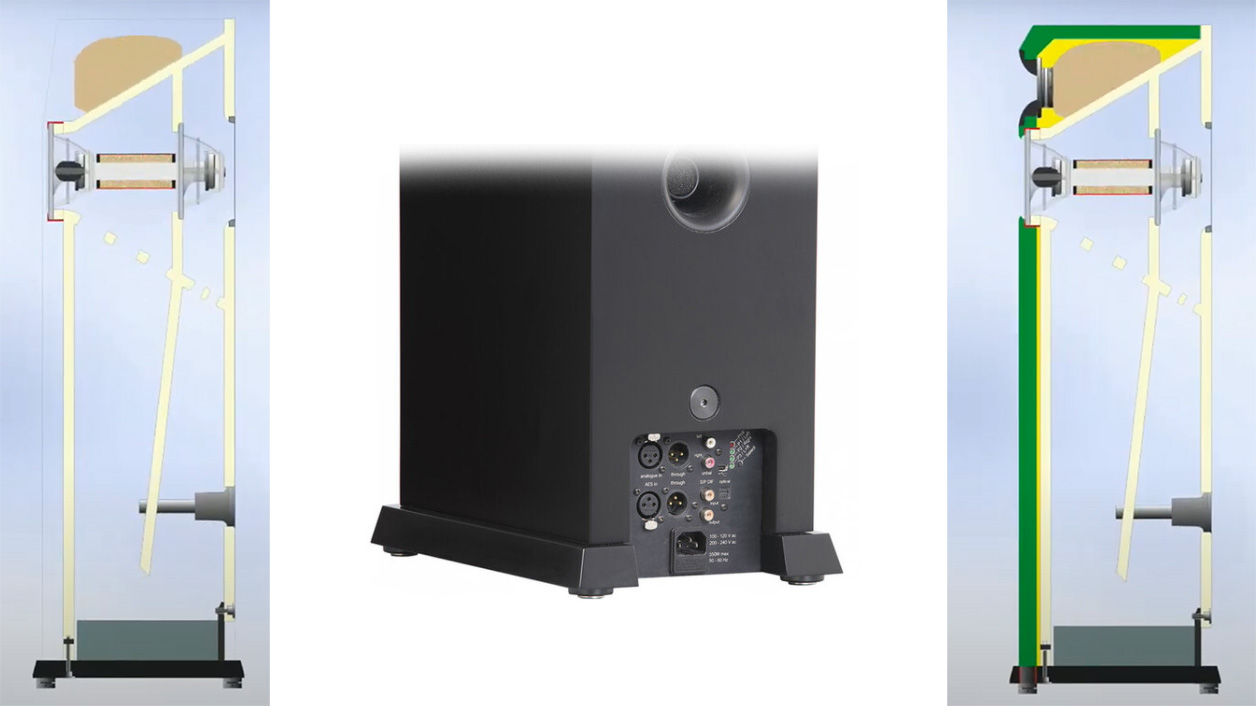 The thick green areas in the right drawing show the inset outer baffle. A thick bolt on the rear's top secures the outer baffle's seating against the inner baffle.

The wave-guided Satori tweeter loaded into a triangular rear chamber with absorptive fill decouples from the main enclosure by mounting on an isolation ring with a rubber seal. That's bolted to a separate baffle which fronts the actual enclosure behind it. Noble & Noble refer to this as their 7th moon or seventh speaker side [here is an actual 7-sided speaker]. These mechanical addresses promise a truly quiet enclosure. 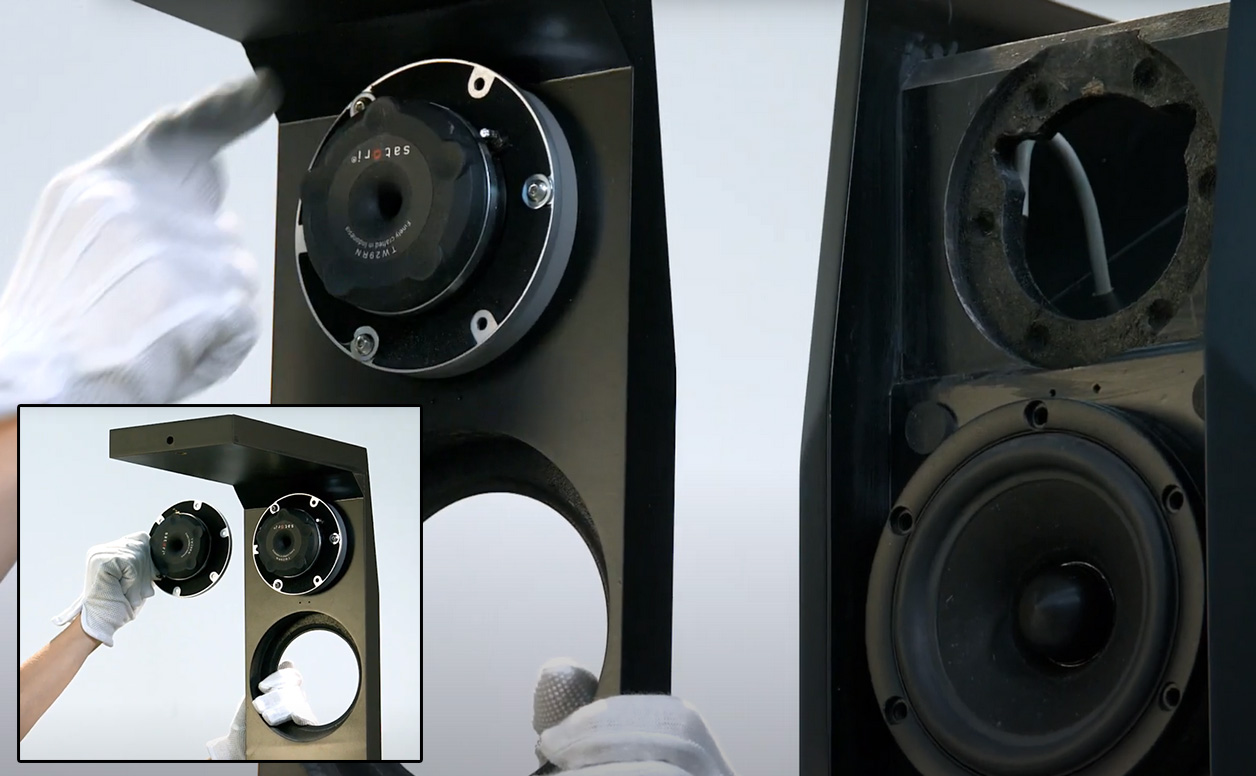 The Neoprene-type dampers right next to the mid/woofer show how the outer baffle decouples from the inner baffle.