"Rather than a padding resistor, L-pad or notch filter, Mini's 2.5-way solution flattens the 3.5dB offset between tweeter and woofer. The filter parts are mostly by Mundorf. Actual slopes and insertion points remain Jun's secret. The AMT is from the same people who make Dayton Audio's tweeter." With their 4" 2-way €2'800/pr Klein, Germany's Fischer & Fischer don't even bother with getting their filter components inside a 20x13x20 cab of 12-20mm natural slate. Theirs ended up in a separate slate box which connects via included SpeakOn-terminated umbilical. Interestingly, a Chinese distributor commissioned the Klein as a domestic problem solver. Petite, potent & posh should be a trifecta popular wherever inner-city living means small flats even for good earners. If one can't play loud or super bassy due to many neighbors and thin walls; if floor space is at a premium; a micro speaker of top quality becomes an obvious object of desire. Converting it to full range by bolting on a subwoofer then could seem grotesque. It's why my review had to split evenly into nearfield and 'free-space' comments; au nature and enhanced. 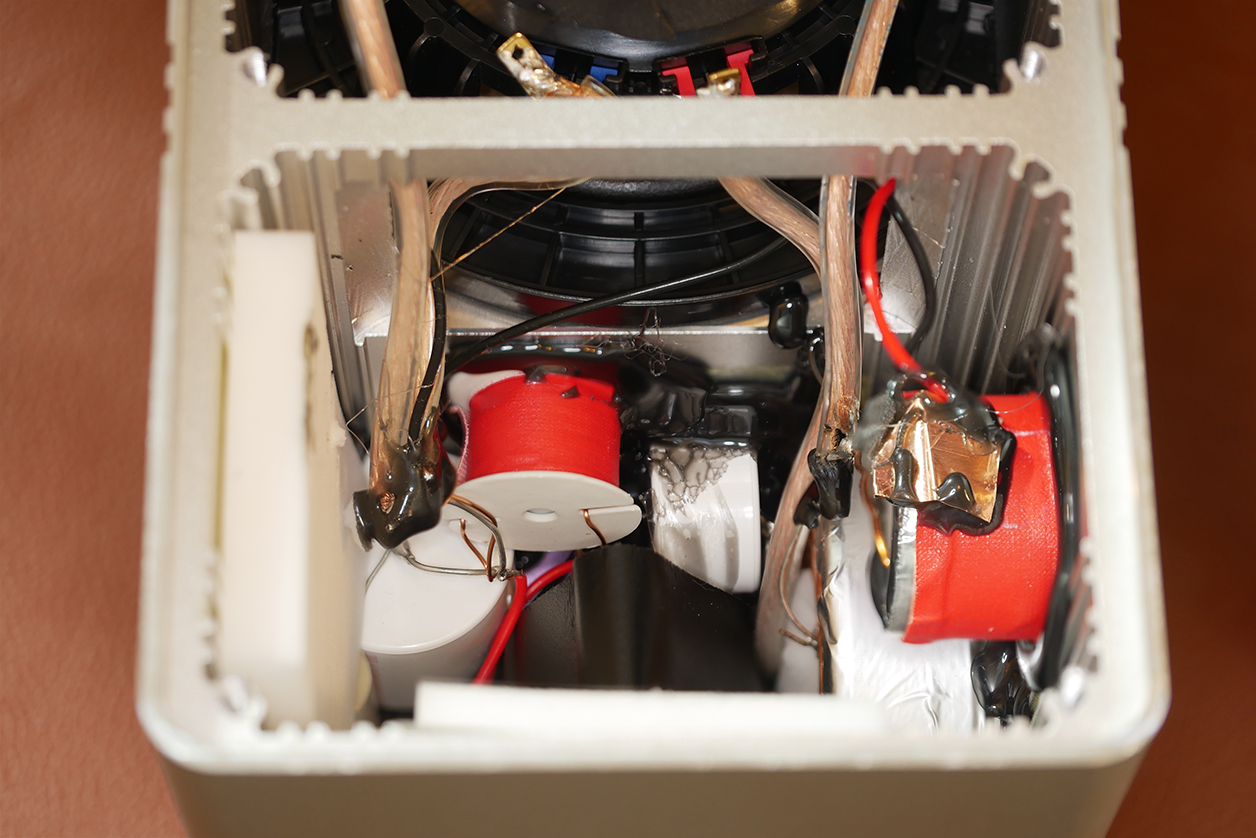 Mini's sturdy binding posts are branded with the company logo and model name. If you wonder about the lilac background… 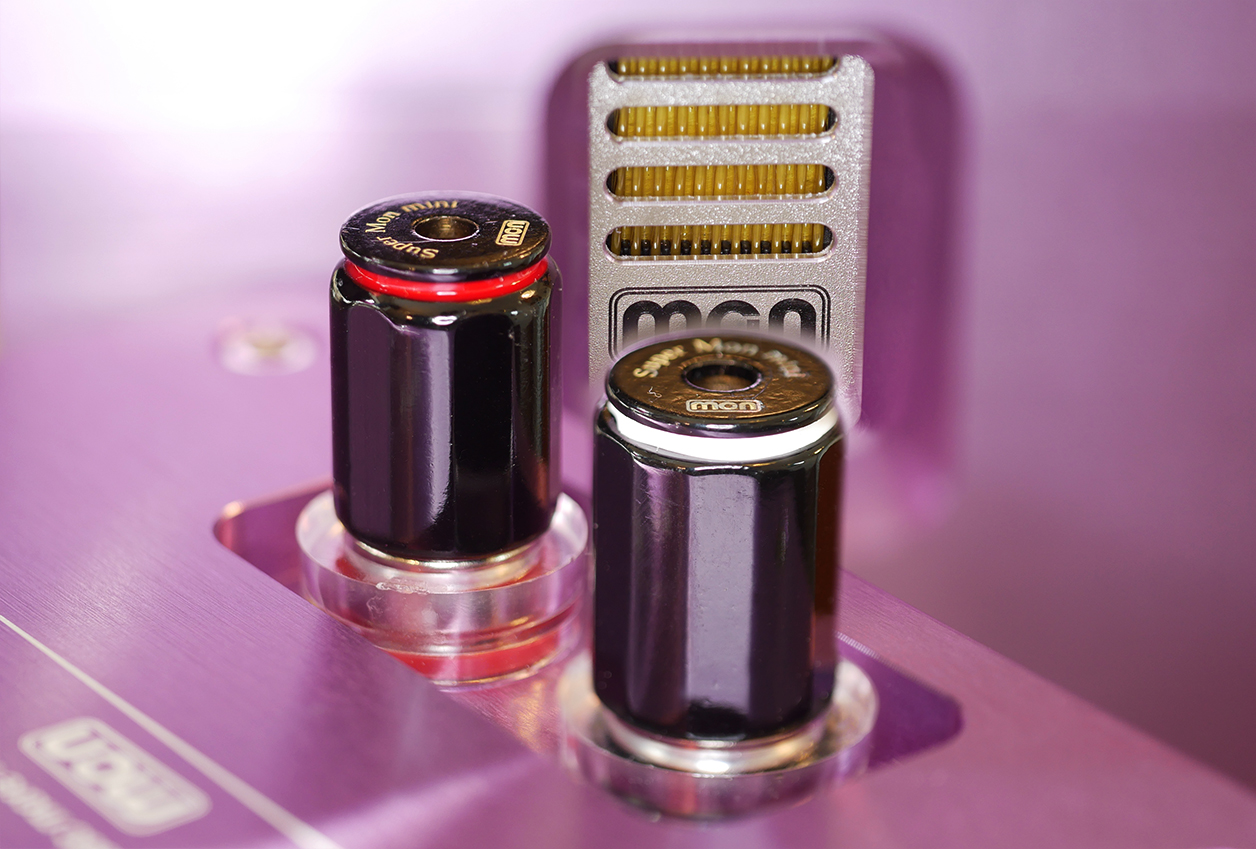 … it's because Jun had sent me the alternate finish. Upon spying it in my office, Ivette muttered the G-spot word gorgeous at least three times in a row. Very small and very pretty; what could be more femmy?

Starting on my desktop, Mini bumped off the DMAX Super Cubes and their external DSP amp. In went Simon Lee's 45/75wpc 8/4Ω integrated. I sent an 'arrived and all good' email to team Mon. Jun's answer was terse. "Thanks. Mini is intended for the nearfield and recommended for a 20cm distance from the front wall." As though to insure I'd not use inches, he'd attached a photo of a metric tape measuring out 200mm between wall and rear port. I simply don't butt my work desk up against a wall when lovely river views beckon. I only draw the curtains ~10:00AM to shut out glare from direct sun. So my table angles strategically away from the wall. A small head turn looks past the big screen et voilà, the mighty Shannon upon which Viking ships had invaded Southern Ireland. Of course I knew our designer's intention. At 20cm, Mini makes the most bass. The subtext was obvious. Don't dare complain of lacking bass outside my spec. My upstairs nearfield corner could comply with extreme wall proximity for a best-case solo adventure. But first, Mini had to show off inside my office reality where, no surprise, the second octave was only hinted at. The DMAX SC5's bigger actively comped driver [€780/pr with external DSP amp] hits 50Hz so digs deeper. Physics and the moon are a harsh mistress. 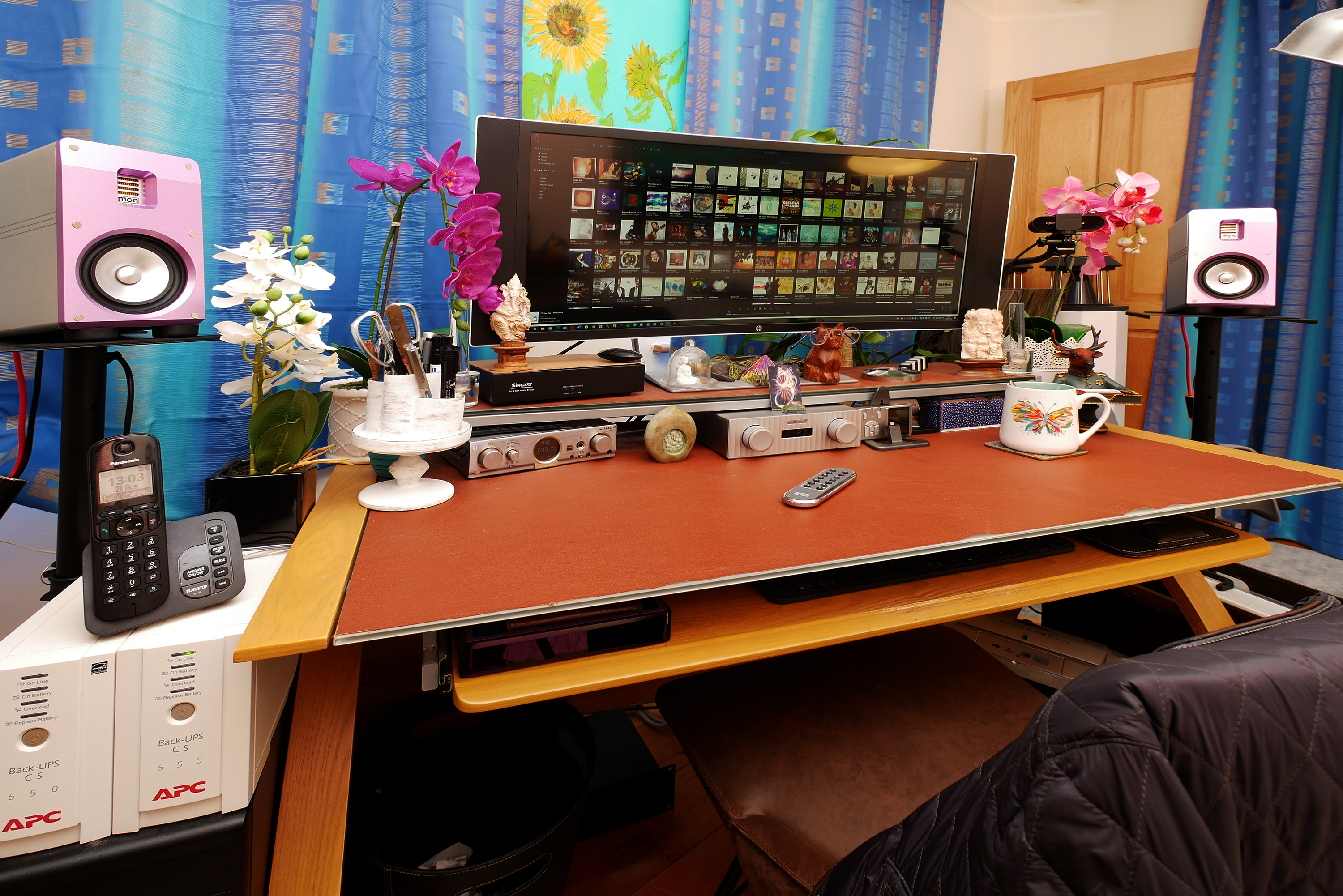 This demanding mistress created a lovely bonus by giving particularly vocals unusual intensity and presence. That's already a unique selling proposition of small widebanders. Freed from LF heaviness and potential gloom gained Mini extra points for clarity and midrange suchness without feeling tipped up. Because my work desk won't tolerate high SPL unless I want to quit work—now the big system across the hallway awaits—here I fancy a more visual/cerebral perspective. Hello walk-in soundstaging of 170cm center-to-center breadth. Hello fine low-level detail and heightened transparency. All that Mini dished out in heaps. Naturally I avoided albums whose entire raison d'être is the low end. No drums 'n' bass. Only morons wear fatigues to a white wedding. I focused on acoustic instrumentals and smaller-scale vocals. Those impressed with slightly electrified suchness reminiscent of my upstairs Raal ribbon headphones. Percussive perspicacity was high too. That whispered of low time confusion so keen transient fidelity. I'd characterize the net effect like ice-cold water on a hot day. It's the most refreshing drink so superior to any 'enhanced' drinks like juices, even ice tea compromised by sugar. And yes, keen observers would also note that low drums only registered skin hits in the 2nd harmonic, not the lower cavity resonance of the fundamental. Considering the €2K tag, it's fair to expect more on that score. Mini would thus move onto greener pastures. And as luck of the Irish would have it—hey, it's called the Emerald Isle for a reason—deep green was my next destination indeed.