How much is enough? If you know that, you also know excess. With a quality sub like our €1'390 dual 9½" force-cancelling Dynaudio plus active analog filter to create mirror-imaged high/low-passed paths, the answer was plain. Anything more than Mini is excessive. Audio meatarians protest. It reads far too vegan. Surely this diet lacks manly proteins, tastes bland and certainly fills no big stomachs. Wrong. A 4th-order Linkwitz-Riley filter defines by its 6dB point. Mine had Mini down 6dB at 80Hz. With nothing lower presenting at its voice coils, the double-decker drivers stayed cool for extra dynamic range. The sub dovetailed seamlessly by sitting 86cm closer to the chair to offset its 2.5ms digital latency. Hello time alignment. With a black-curtain call like orchestral musician auditions, you'd peg the combo a super-coherent multi-way good to ~25Hz. That's normally a big box. Open the curtain and instead see a €3'400 combo of two puny micros and one compact sub. In this 4x8m room, anything more is excess. Unnecessary. Decommissioned. In fact, anything more far more likely backfires, looks overbearing and wastes money on no real returns. Lesson. Absorbed. For myself. Most won't believe it. Retailers breathe a sigh of relief. Good. Let's sell more mon(k)ey coffins. 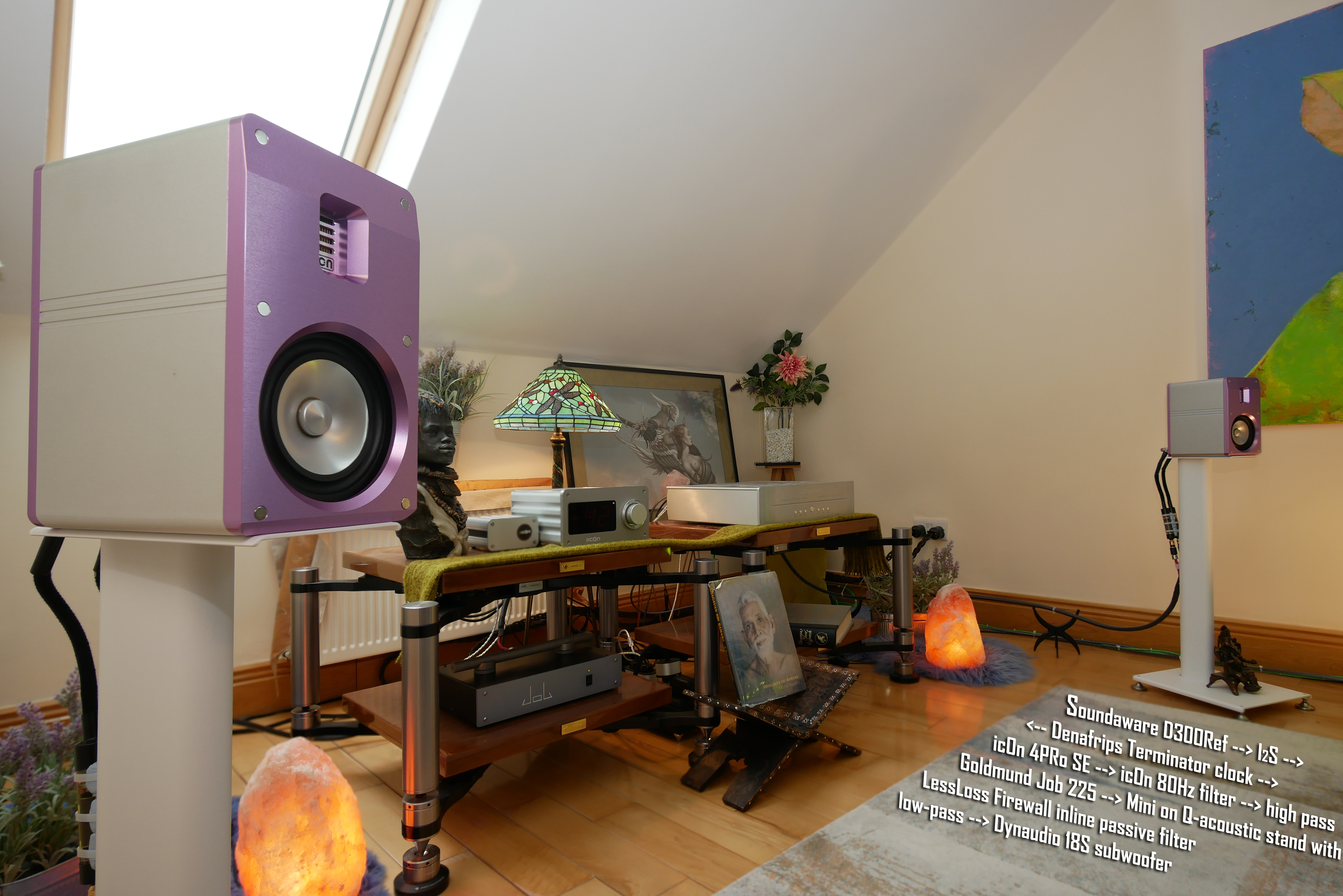 It's how the hifi race propagates. I'd rather have the audio equivalent of a good chef who creates maximum flavor with minimum effort. Here that's lowest possible impact on eyes and portemonnaie. Room size determines ultimate loudness beyond which things get uncomfortable. Whilst such tiny artillery might get shouty in capacious mansions, in my space it got louder than I wanted without distress. Right tool for the job; including the lilac color as it happened. Getting obscene with a sub to blow Mr. Seo's nearfield recipe to smithereens turned out to be a very sane thing after all. 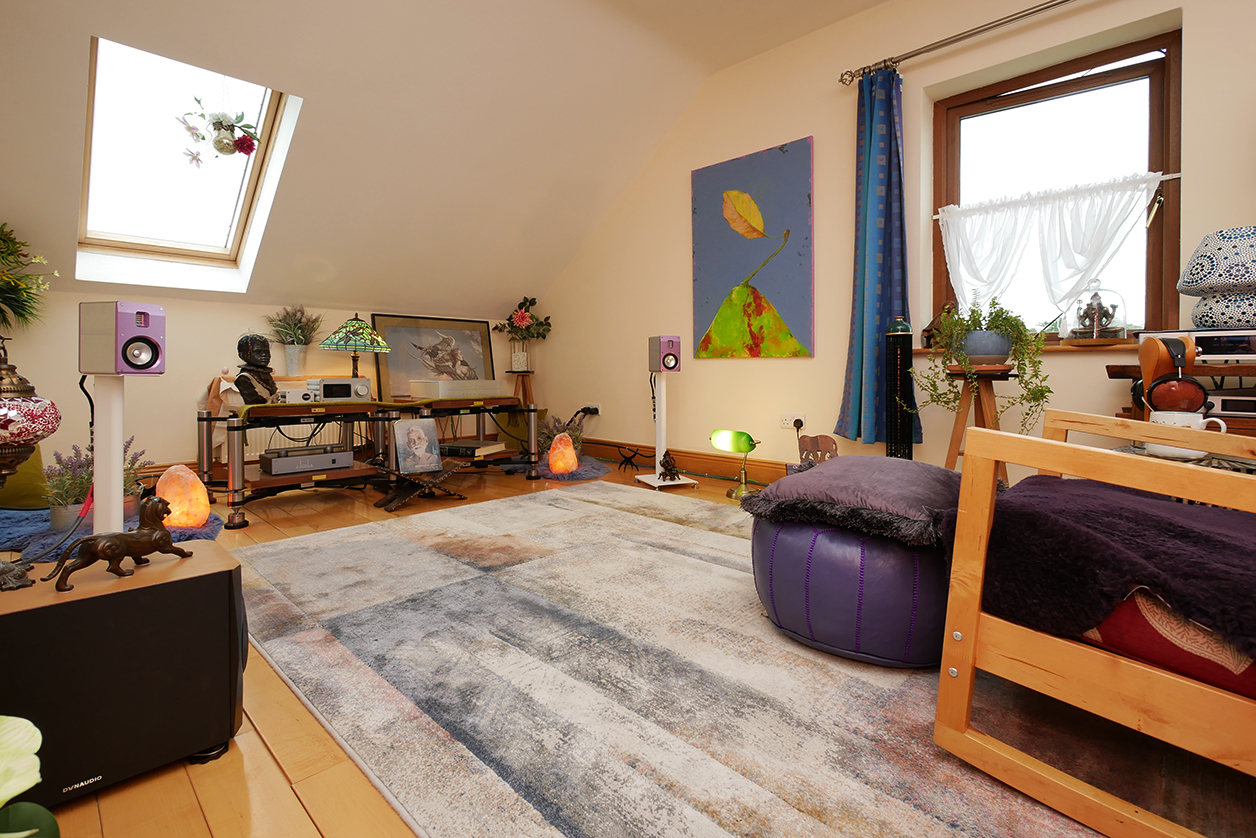 To belabor the obvious, this setup staged and imaged like demons. Anyone no longer a hifi virgin could tell just by looking at it. What that wouldn't tell you is dynamic jump factor and ability to let wiry attacks snarl. The German word schnalzen denotes clicking one's tongue, snapping fingers or cracking a whip. Whatever your favorite English word is for all that, Mini knew it. Rather than laid back and contemplative, when fronted by the DC-coupled fast Goldmund amp, this sound was exciting, energetic and visceral not cerebral. From 35 to 40dB of passive-magnetic signal cut off the Terminator Plus' 4Vrms XLR output got room-pressing loud. Again, this physical shrinkage isn't had at the cost of 81dB inefficiency. It behaves like any other standard ~88dB load. That's surprising but a likely contributor to such willing exuberance. Inert cabinetry, self-damping drivers and quality filter parts are the other usual or not so usual suspects.

That left our large system to unleash Mini in. Here's a parting glance at the upstairs, sub and SD-card source outside the frame. Speaker wise, I call that visually most unobtrusive. At €122.46 delivered, I also thought these white Q-acoustics stands ideally matched. Shipped standard with two different top plates, the bigger one with its sides curved up fits perfectly. I'd first used the smaller one inverted. Anything more on the stand front would be excessive, too. Time for Act N°4 before the fat lady sings; and an intermission to cover Mr. Seo's background. 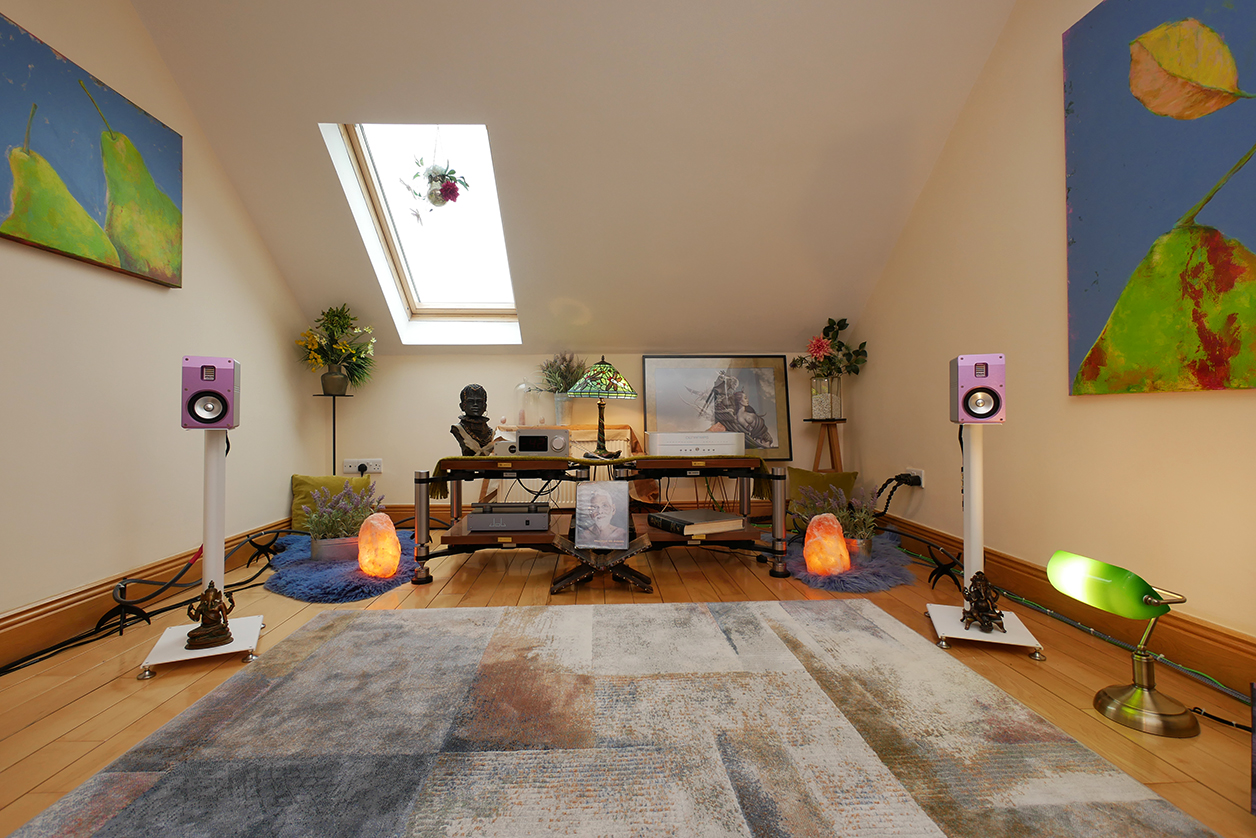 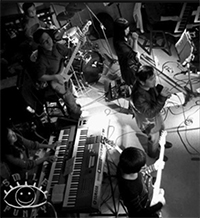 "Jun majored in Mathematics or topology to be precise. In his products you hear from where his obsession with correct phase stems. Born in 1974, he grew up during a time when audio gear was a symbol of wealth in South Korea. His parents were teachers and dedicated their efforts to providing him with a range of experiences; including a tube-based sound system. His audio curiosity began when he tore apart his 1195R CD player which used a bit-stream DAC. After graduating college, he became a math teacher at a private institute. His teaching talents generated fame which advertised his institute on national radio. Early success then allowed him to pursue the hifi hobby with high-end equipment, making him one of very few young Korean audiophiles of the time. He also played in numerous bands and describes his marriage as being not only to his wife but to audio. Back then he believed that he needed different systems for different music genres. He used three 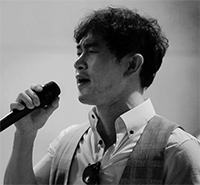 rooms in his house for different setups. The first had Rosa and Andra speakers from Egglestone Works with Jeff Rowland amplifiers and a Burmester preamp. The second used AR4X speakers with his own amplifier. The third ran Ruark Equinox speakers. He loved the harmonics their wood enclosure created. Each room had multiple models from his chosen brands. He once owned seven AR4X speakers and five Ruarks at the same time. He loved Bebop and Pop over the AR4X.

"His broad tastes in music led him to buying different instruments and learn how to play them. This helped him understand how each produces sound to later inform his speaker design. A double bass, electric bass and Fender acoustic bass all sound different but must all be replayed with proper sonic mass. James Taylor and Eric Clapton sound different on the same instrument. Yamaha Motif and Korg synths differ. Learning about their signatures hands on became Jun's great pleasure. It led him to design speakers that would play classical music and Jazz equally well. When local doctors in Daegu acquired them, it gave him confidence to formally enter the audio industry. To this day, many around Jun express concern that he gave up a successful stable career to pursue this hifi passion instead. His sonic philosophy prioritizes solid sound density, clear mids and a comfortable listening experience. He carefully picks his parts and materials to tune all of his products. For already 15 years he's fielded his own blogs and Cafe Naver threads to promote his products locally. They finally had their US debut at the Axpona 2022 show."