You could wonder. Why enthuse if there's little music below 35Hz? First, remember my monitors are 35Hz at -3dB. Already that wanted some reinforcement. Whilst before/after wasn't much on raw quantity unless I pulled out bass-head fare beyond their unassisted reach, it really factored on perceived quality. The often small but decisive difference was a more tacit sense of musical grounding or anchoring plus a more spelled-out sense of space hence scale. You might say that the music had more bottom-up wokeness. You could also say that the subjective black values of the color palette had deepened. Once in place, you'll miss either when it falls asleep again. The sub-amp mute told that tale in capital letters. Why is rain right and a fiddle fit? I haven't the faintest. But the MusikBass in augmentation mode off the TruAudio amp was right and most fit. Time to shift into higher gear downstairs. Here the room, had it a back wall, would be another 24m². Due to an open floor plan spilling into a big kitchen plus lounge, it really amounts to nearly 100m². Then there's a double-high ceiling above the music area. That makes for considerably more cubic volume than upstairs to play to or energize if we apply typical sub lingo which we already know won't apply here. The MusikBass avoids typical room pressurization.

How would Michael's twosome fare now again on speakers good to 33Hz at -3dB by their lonesome? To condense the upstairs showing in six easy takeaway bullet points:

• cat-paw lightness and quickness
• out-of-nowhere appearance without common boundary interactions to effectively remove the walls and with it cause far less next-room bleed than usual
• not as slamming or transient hard as a big downfiring box sub so less intense shock-wave impact or kick
• far superior stopping power for no energy storage, overhang, mud or blur
• seriously inefficient to require stiff voltage gain in the chosen amplifier (not synonymous with raw "watts")
• far more directional than 'omni' box subs so should prefer to be low-passed below 80Hz to better disguise its location

Intermission. To fully digest my bullets, let's revisit RiPol dispersion. Destructive interference on each cheek has long bass wavelengths wrap around to cancel in counter phase. Squat next to this sub to observe its energy nulls on either side. There's hardly any sideways bass. So precious little hits the sidewalls to reflect and arrive late at the seat. There's no trigger for the standing wave which runs at a 90° angle to the MusikBass axis. That stops a very common source for boom. Lack of boundary reinforcement reiterates why in use, the MusikBass is so inefficient past its already low 85dB spec. Its directional asset and precision glory spell a simultaneous big efficiency loss. It's why TruAudio's ultra-high input sensitivity is such a win. Were that a regular speaker amp, on most speakers with modern sources outputting from 2V to 4V or even more, a 0.2V spec would jump from mute to too loud in one or two clicks. For the MusikBass, it builds in the excess voltage gain required. It's why this is an ideal twosome; why noise-free operation is a special achievement. Abnormally high gain easily gets noisy. Not here. Whilst single rack-space cosmetics, folded sheet metal and optional ears all spell pro audio, many noisier "high-end" amps would be jealous. Don't underestimate this active filter slash mono amp. It does a perfect job, just doesn't charge bling rates to do it. 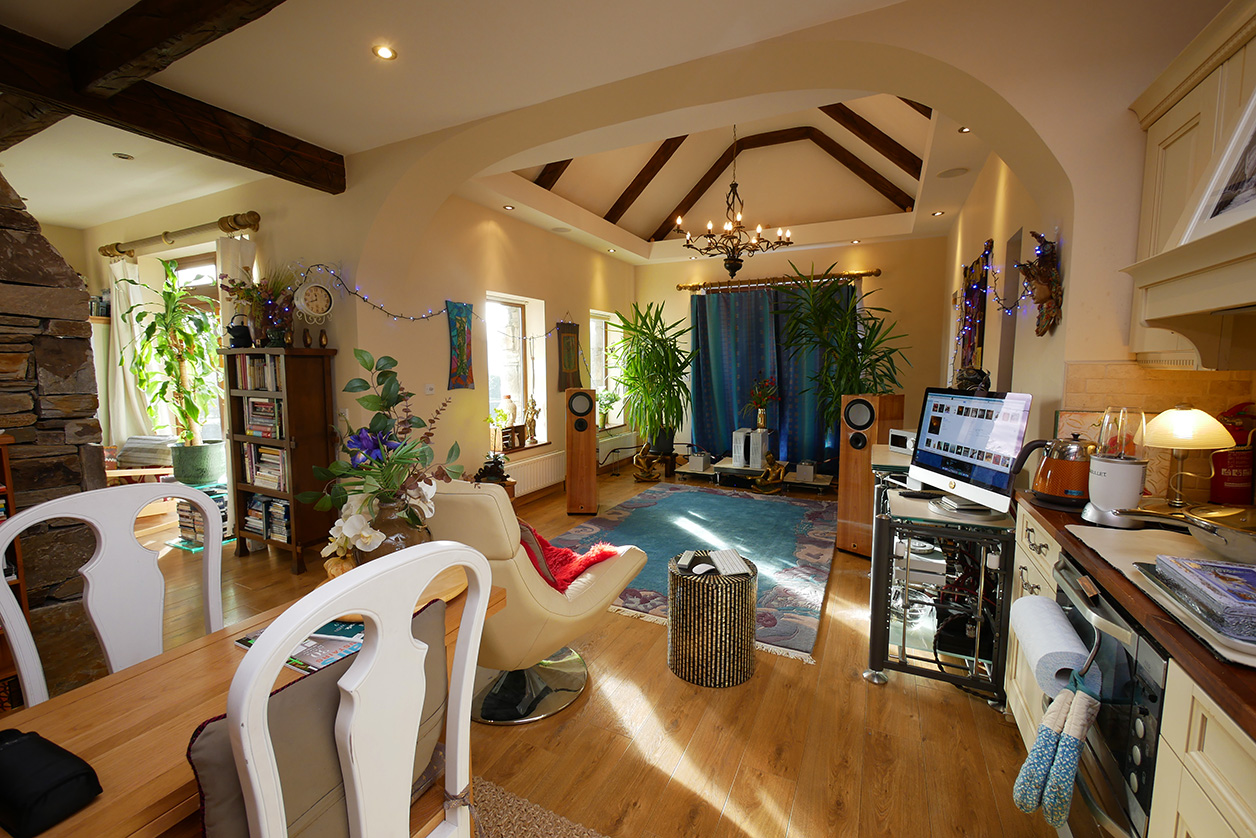 For the big room, I sacrificed a tad of boundary reinforcement. I desposited the MusicBass where it looked best – stage center atop Artesanía's Krion amp stand so slightly off the floor. That also put it at 4 meters from the listening chair to check on sufficient output in such scenarios. I first tried augmentation mode. The in-room extension of these floorstanders simply proved too good to benefit from add-on bass. Back it was to filter mode. Hello Pál Nagy's icOn 4Pro SE which I borrowed from upstairs. Now TruAudio's own low pass bypassed.