Technically inclined parties can read the Ridtahler/Hoos patent DE19830947C2 which sold in 2004 and expired in 2014. It explains why ModalAkustik don't identify their woofer. It's their piece of protected IP. We remember how the 2004 patent expiry of Oskar Heil's air-motion transformer birthed new AMT drivers from Dayton, HEDD, Mark & Daniel, Mundorf, Satori by SB Acoustics and others. If you want to bake your own RiPol, do your own cab and driver modeling or pay Axel as a project consultant. Whilst waiting for the year to end and a MusikBass to ship, this Geoffrey Heinzel email arrived: 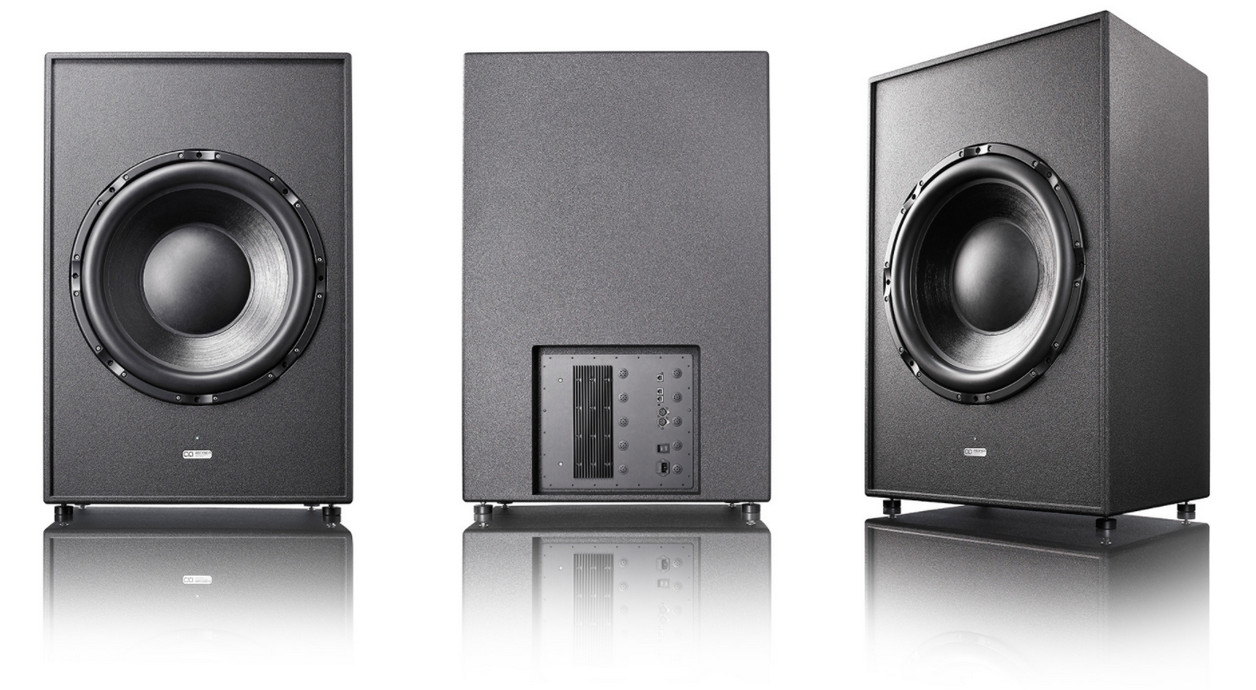 "Infrasonic bass isn't audible but an essential part of any high-performance theater. It pressurizes the room and evokes the physical response intended by more movie soundtracks than you might think. True infrasonic subs are extremely hard to engineer, not inexpensive and must work in tandem with other subs to do their part of extending bass into the single Hz digits. This isn't about boom, bloated bass nor marketing claims by me-too big cone alternatives. The demands of these frequencies and durations found in some soundtracks quickly separate Ascendo from those masquerading as me-too. When calibrated correctly on time, phase and level with the rest of the theater channels, the result of including Ascendo infrasonic bass is an engaging and completely immersive experience one doesn't forget. These frequencies are often used in quiet passages that can at first be very subtle to cause the body to react with a "what was that?" followed by dynamic contrast and system headroom requirements that separate really good home theaters from exceptional private cinemas. Ascendo's smallest infrasonic sub [below] has a 62cm/24" super woofer with an incredible 9cm of linear stroke. That moves a gigantic 10-liter volume of air per stroke to pressurize the room. Due to its ultra-low resonant frequency and sealed enclosure, group delay is several times faster than that of smaller 18", 15" or 12" subwoofers at the same frequency. Its acoustic power output per cubic inch is by far in favor of this unique design over stacked multiple smaller subwoofers. This Ascendo-developed super woofer is powered by one of the best high-current amplifiers delivering 6'000 watts of power for multiple seconds. Its state-of-the-art DSP allows perfect alignment of the SMSG24 to any existing setup by adjusting crossover, phase and amplitude." 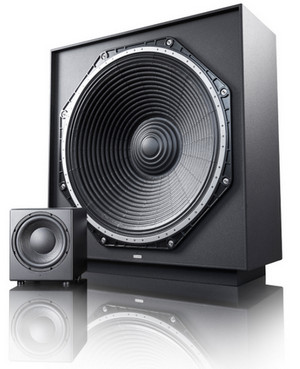 We know perfectly well that this is not what the MusikBass is about. It's neither about pressurizing the room nor about infrasonic reach and maximal power. Different job, different tool. Having clarity about that is key. Hello music bass versus home-theater bass. Except for the biggest of church organs, acoustic instruments don't breach infrasonics. A piano's lowest note is A0 at 27.5Hz. A 5-string upright can hit B0 at 31Hz. The open low E on a bass guitar is 41Hz. A kick drum can make 50Hz. Synth bass can go lower but few producers of music intended for home playback deliberately record data which nobody can hear. They'll assume a practical/theoretical limit of 20Hz.

Movie soundtracks mastered for commercial cinemas anticipate different hardware. That poses far greater challenges when relocated to the home and the type speaker one typically finds there. It's why home-theater fans call subwoofers mandatory. It's not just about raw extension but coupling it to full power. With music where nothing explodes, drills into permafrost or launches rockets in outer space, that's no requirement. Now the primary benefits of a properly filtered sub/sat system are expanded dynamic range in general; more bass extension particularly with smaller mains; audibility of the occasional synthesized very low bass; and audibility of spatial effects which may occur at very low SPL but also very low frequencies.

About commercial opportunities now that the RiPol patent expired, "Axel and I have no intentions to stopping anyone from exploring the principle. I'm the best example for how Axel supports anyone who wants to use it. This includes DIYers who need support to build their own. The purpose of the patent was to have people contact him before bringing something to market that doesn't work properly. Voxativ for example did consult with him. Axel has been in the business long enough to encounter many situations that made him cautious. Both of us see ourselves regularly confronted by old prejudices against the concept that seem to stem from online fora. I hope you're right about people recognizing the difference of properly engineered solutions and ignoring forum chatter about far inferior implementations which muddy the pond."

Having much admired RiPol bass before in speakers from Cygnus, Ecobox, Voxativ and Zugspitz/Bastanis, more subwoofer implementations would mean that more listeners could enjoy the proven invention with regular not rare boutique speakers. In my book that would be a most excellent thing. If you go commercial, do insure proper RiPol math and the right driver requirements. Above you spotted the 50-inch Ascendo SMSG50 infrasonic sub next to their 15" version. The beast is man high, weighs 400kg and claims 105dB SPL max output at 5Hz, 125dB at 20Hz. That's literally weapons-grade. Not my bailiwick or even curiosity but madness props are due regardless. Give me two ultra-compact MusikBass any day of the week. They'll be narrower and shallower than the 15" in the photo which itself looks like a pygmy next to the beast. 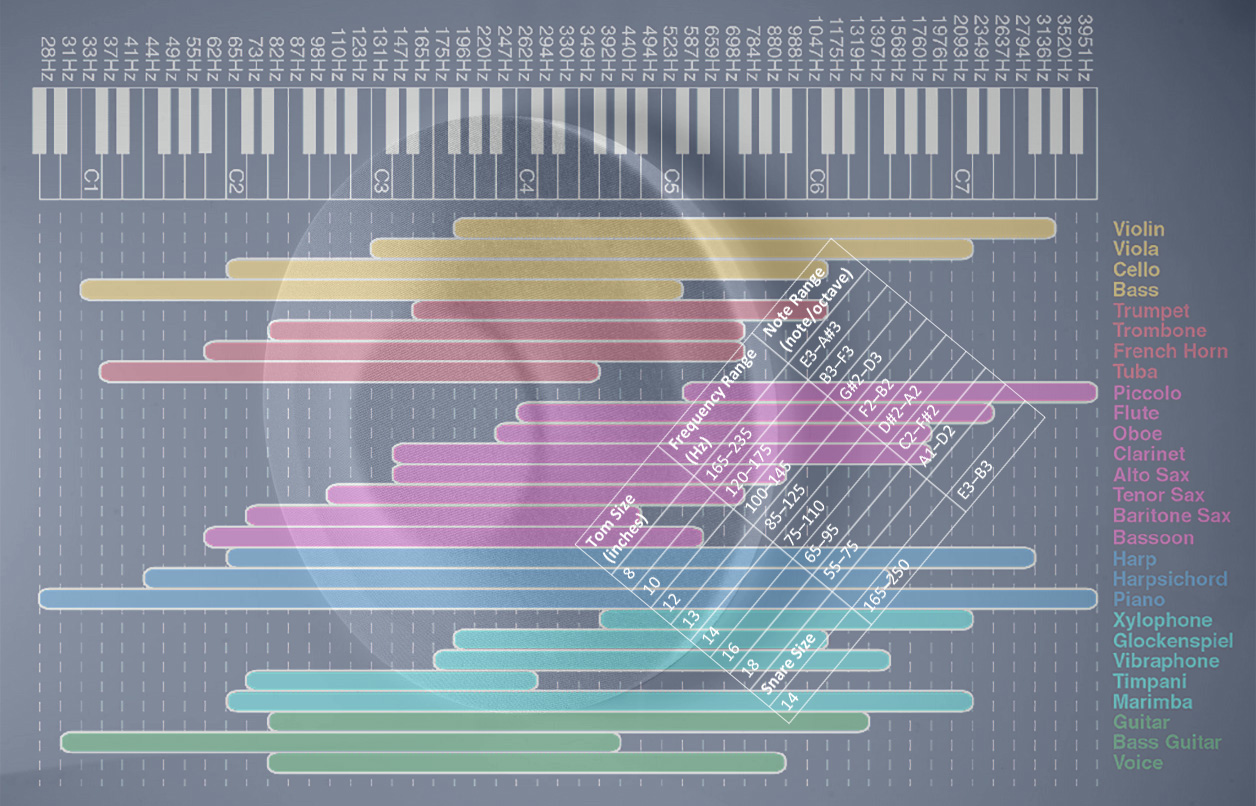 The fundamental range of orchestral instruments and all vocals. There are no fundamentals higher than 4kHz or lower than 28Hz. Overlaid is the range of toms and snare drums.