USB. Audirvana 3 recognized the c|AQWO's USB input as a Combo384 Amanero with 768kHz support. Set to maximal power-of-2 upsampling to thus dispatch a Redbook file as 705.6kHz signal, the Mét only acknowledged 352.8kHz to play with pitch-shifted distortion. Selecting in Audirvana's custom menu all 44.1kHz-based frequencies to render at 352.8kHz, all 48kHz variants at 384kHz fixed that promptly. 768kHz PCM was specific to the Amanero chip, not Métronome's subsequent FPGA and/or AKM DAC. With our 99.9999% pure CD-resolution library, such numbers games are ultimately irrelevant of course. Mentioning them only ticks off the topic and those misguided few who think that without extreme upsampling, modern digital isn't modern. Given fashion trends, they may actually have a point about the 'modern' bit. The misguided bit would be to think native 16-bit/44.1kHz passé. It's just weeks ago that Qobuz streaming at 1'411kbps aka CD resolution became their new default to eliminate 320kbps compression from their cloud for good. 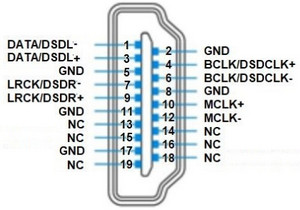 Most digital engineers I've talked to consider 24/96 the reasonable limit. Now anything above it becomes fool's gold for the gullible. But anyone with HQ Player on a music computer/server can resample PCM to DSD so feed the t|AQWO an already quad-rate DSD signal to sample yet another variation in the endless "which sound" amusement of this French source.

I²S. Our Soundaware D300Ref USB bridge and Denafrips Terminator are both I²S enabled and compadre. So I checked on pin compatability with Métronome's. There's no standard. External I²S can distribute over HDMI, RJ45, S-video, even paralleled BNC as Ancient Audio, B.M.C. and C.E.C. do it. Matching ports on either end still don't guarantee a successful handshake if pins aren't assigned identically. As you can see, HDMI has many pins and not all are needed for our purpose. Which to wire up for what data?

As had been the case with their one-box AQWO, Métronome's at first was incompatible with ours. To take the suspense out of potential matches elsewhere, I asked Métronome's design office manager Cyril Monestier for their pin-out for I²S over HDMI. Here we see it. I now asked Denafrips whether their variable pin-out options could be made to match Métronome's.

They could. Set the Terminator to its I²S-A input, hit 'mute' once to enter configuration mode, then briefly hit 'phase' so the sample-rate indicators show PS Audio's I²S standard of "100", i.e. with the 1X LED on, the 2X and 4X LEDs off. (Our domestic setting had been "111".) Wait 10 seconds for the Terminator to resume operational mode. Voilà, AQWO luv. t|AQWO output native CD, CD at 24/384 and at DSD128. The Terminator's display switched instantly to confirm the new data stream and deliver perfect sonics either way. Any DAC running PS Audio's HDMI scheme or being configurable to it is thus compatible with Métronome's transport for I²S transfer of PCM/DSD. Likewise compadre are the Jay's Audio disc transports with Métronome's DAC because their default pin-out is PS Audio's. Which now ends all this talk over bits, bobs, bytes, sample rates and formats. What happens if we just hit play?

Play'n'away. To kick off, I indulged a 74-min. playlist of Jan Garbarek cuts from his Visible World and Rites albums for ECM, one on a Maxell CDR, the other in an .aiff folder of Apple's FusionDrive. Brief smudgy taps on the glass displays switched instantly between 352.8kHz USB, 352.8kHz I²S and DSD128 I²S. I had all other inputs disabled to toggle between just disc and computer whilst silver disc and RAM kept going. Regardless of an eventual small preference for physical media as first CD resampled to DSD128, then CD to 352.8kHz, then 352.8kHz USB, my loaner Mét Quartet majored on burly dynamics, profound bass, rich tone textures and dense staging. Ultimate contrast ratio, extreme separation, air and speed all were subservient to a very organic master plan. That prioritized weight, loaded voltage swings and very earthy if slightly soft materialism. And that's before the small triodes kicked in. Those increased some elements, softened others and in general inched farther away from the air/speed axis. Métronome's slogan "the most analogue digital audio" had come home to roost. I thought of the young starlings which each year enter our chimney to end up trapped behind the fire place glass until we catch and release them. To fling my French starlings into the bigger outdoor air meant bypassing those NOS Vinnie Rossi bottles.

Single-box AQWO in the silver finish.

I'm one of those contrarians who thinks that one can have too many tubes, be they physical or equivalent virtual effects. Without physical specimens, our Denafrips Terminator had aged in that direction until the new DSP board earlier this year sent it on a stem-cell cure. On paper it was ultra-modern 1'536kHz PCM and DSD1'024 support. In practice it was higher small-detail magnification and resolving power for ordinary 44.1kHz fare. Something quite similar happened now after I defeated our big tubes. That ran the preamp as top-notch passive with active i/o buffers. By flicking two hidden toggles, what had felt slightly thick on my subjective scale for at least non-classical fare had moved back into the sweet zone of personal rightness. Everyone hosts different ideas on where to sit ideally between speed and substance. Everyone's system benefits more or less from being nudged in any given direction. With the Mét, the basic attraction is this organic fulsome generously textured gestalt with its saturated rich colors. DSD resampling enhances it a tad more like a cube of sugar in mild coffee. Tube drive increases it further like milk in coffee. So you can sip your java black, sweet black, white or sweet white. It works like an adaptable multi-stage affair and the digital filters become tiny little deciders within it.

Growing timbres not timber. At 5'46" in her video, Juilliard graduate Katie begins to play four different traverse flutes, a Gemeinhardt 2SP, a Yamaha 482, a Haynes Q3 with two different head joints and finally a Muramatsu. She takes each through the same three excerpts from Anderson's Etudes N°1-3 opus 33. Even with YouTube compression, it's a rare chance to sample sundry instrumental timbres with the same player, music and microphone. DSD128 + tubes was the Muramatsu. Native PCM + transistors was the Yamaha. These obviously coarse pointers also mirror the scope of actual hifi changes. Those weren't polarizing by any stretch just as Katie's delivery and phrasing doesn't change whilst swapping instruments. So AQWO's organic milieu stayed put. Yet the same differences in harmonics and tonal balance we hear with the flutes were clearly present. If one pays sufficient attention and cares enough, one should end up with a favorite. And not being locked in, with the Gallic quad stack one is allowed to change one's mind or apply different sonic nudges to different recorded balances with a few taps on the touch screens. Such multi-tasking is very 21st-century modern after all. Thinking about which of our possible hardware combos would ideally interface with the French lead, a natural suggestion was Node Audio's compact Hylixa run off Bakoon's AMP-13R, then Acelec's Model One monitor. So that's what moved downstairs into the main room for the next sessions.