Now we let the 'opposition' presents its case – Purifi's Bruno Putzeys & Lars Risbo on GaN  as culled from this interview:

Lars: If you stick to audio performance alone, we wouldn't have bothered going to class D to begin with. You don't do that for audio quality. You do that to get better efficiency, make the amp smaller and yada. Then you get a new set of problems to fix, such as what it sounds like. And then there's reliability, manufacturability and so on. I wouldn't say that GaN is going to be the answer to those things and neither is upping the switching frequency.
Bruno: Well, for a given efficiency you could probably increase the switching rate but if I'm going to shell out as much for a pair of FET as what you'd normally pay for the whole amp, I'd rather benefit from that in terms of higher efficiency. Of course not everyone is able to make that choice. I've spent my career honing control loops, most audio designers haven't and so they have to rely on simpler control loops. In that case, increasing the switching frequency is definitely helpful to reduce distortion.

Lars: We're as fanatic about audio quality as anyone else but because we've got feedback down to a 'T' now, we're not forced to resort to higher switching frequencies.
Bruno: If we need to be geeky… lets grab the specs for the FET in our 400W Eigentakt module and its closest GaN equivalent. So that's the FDP42AN15A0 (OnSemi) on our left and the EPC2033 on our right. Rdson: 36mΩ vs 7mΩ. Clear win for GaN here. 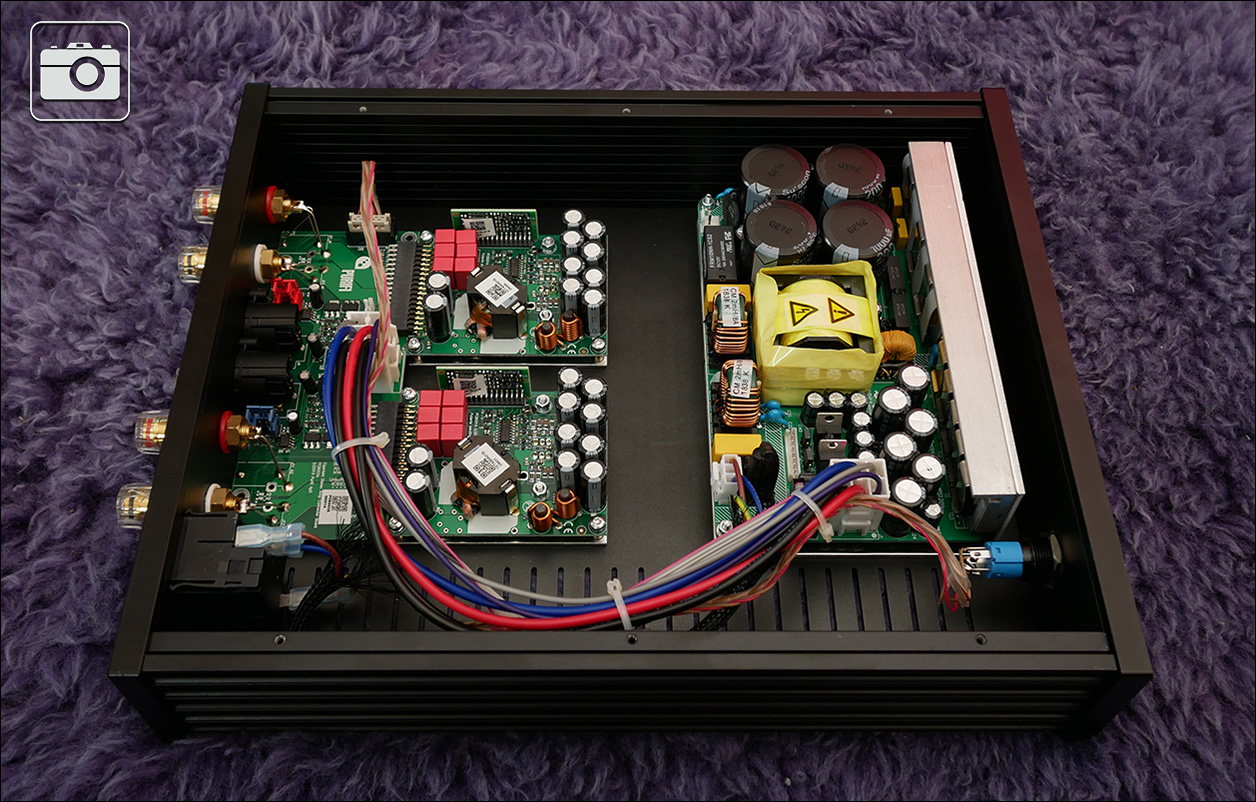 Lars: It's also got a higher current rating (24A vs 48A) so if we want to be fair we should be scaling by about 2:1.
Bruno: That's still a minor win for GaN because after scaling, it'd come up at 14mΩ. Gate charge is of course magnificently low (30nC vs 6nC after scaling) so driver losses would be low and you can turn them on fast. GaN also has zero Qrr so you can do that if you want. But the main thing that sticks in my throat here is output capacitance. Our good old FDP42—which is from 2002 mind you—has an output capacitance at 100V of 70pF whereas the EPC device puts in a whopping half nanofarad (or 250 puff after scaling). That means your idle losses will go up or you will have to increase dead time to allow the output inductor to recover the extra stored energy at its leisure. And isn't it just idle losses that more or less determine real-life power consumption in full? And if power consumption isn't something to care about, why not just stick with class A?

Lars: And high dead time combined with high switching frequency sounds even less attractive. That just increases open-loop distortion.
Bruno: In applications like motor controllers and high-density SMPS, GaN and SiC devices are a breakthrough, mind you. It's just that audio is this weird application where average power is very low and where dead time actually affects performance.

Lars: And GaN is going to mature so this picture is bound to shift at some point. Just not now.
Bruno: True. On the other hand, silicon is doing the same. More recent devices are getting frightfully close to GaN. Sadly they only come in SMD packages that require fairly expensive methods to get the heat out. Like most GaN devices. It looks terribly ancient but the good old TO220 package is still a neat compromise in terms of performance for the price.
Lars: It's just a game of trade-offs. The fact that we're using normal parts and the reason why we chose to do so doesn't make for a sexy story. We all like to believe in a magic bullet but when you're an engineer, you have to make choices based on tangible grounds. So the sexy story we're trying to push about Eigentakt is that we think it's a bloody clever design.

That wrapped our counter perspective on GaN. To extricate Purifi's key points, higher switching frequencies aren't attractive with advanced control loops when properly embedded negative feedback is sorted. With simpler control loops and no feedback, faster switching speeds do become advantageous. As we've seen, the Element 114 operates without feedback and we'll assume that their control loops aren't as advanced. From that perspective, everything makes sense now.