• My final questions go to the issue of linear versus switching power supplies, never mind that for your power ratings, a linear supply would be enormous to greatly drive up the price on heavy iron, weight and much larger chassis, then introduce 50/60Hz line noise and other complications. Of course that didn't prevent Theta Digital from doing exactly that with Dave Reich's linear power supply for Ncore 1200 and H2O Audio with ICE. Could you say a few words about your switching power supply and what you do to shield not only your own gain circuit from radiated ultrasonic noise but other gear that's plugged into the same power spur? How about your switching frequency and how many GaN devices does the 114 use per channel?

"Our LLC power supply is more efficient and responds to loads much better than an LC version. It is also lower in noise by making less demands on the diodes, transformers and other components. We use all the typical other items like short traces, small transformers, lower frequencies, better diodes, powerline filters, good grounding, shielding, reduction in parasitic capacitance and of course a very specific PCB layout. The first order of noise reduction is always to reduce the source of said noise with the correct parts, diodes, traces, transformers etc. That order of noise is very low on the kick back into the AC loom to begin with. This has advantages for the supply voltage also. So there are two birds killed with one stone. Added to that is line filtering, placement and grounding. There is no single magic bullet. If there were, that bullet would have to be very large and become a single point of failure.

"Whilst the GaN transistors are faster to switch on and off so could be operated at higher frequencies into the Gigahertz, our reason for using them in the first place is to reduce dead time to zero for no switching distortion. Our switching frequency thus centers around the 400kHz range. Going higher offers little to no benefits but creates a host of other problems like emissions, parasitics and greater sensitivity to on/off timing. The quantity of our GaN devices in the circuit is proprietary. The main point is the sound. It is fun to talk about exotic technologies and techniques but that has little to do with the actual implementation and performance."

• How about -3dB bandwidth? 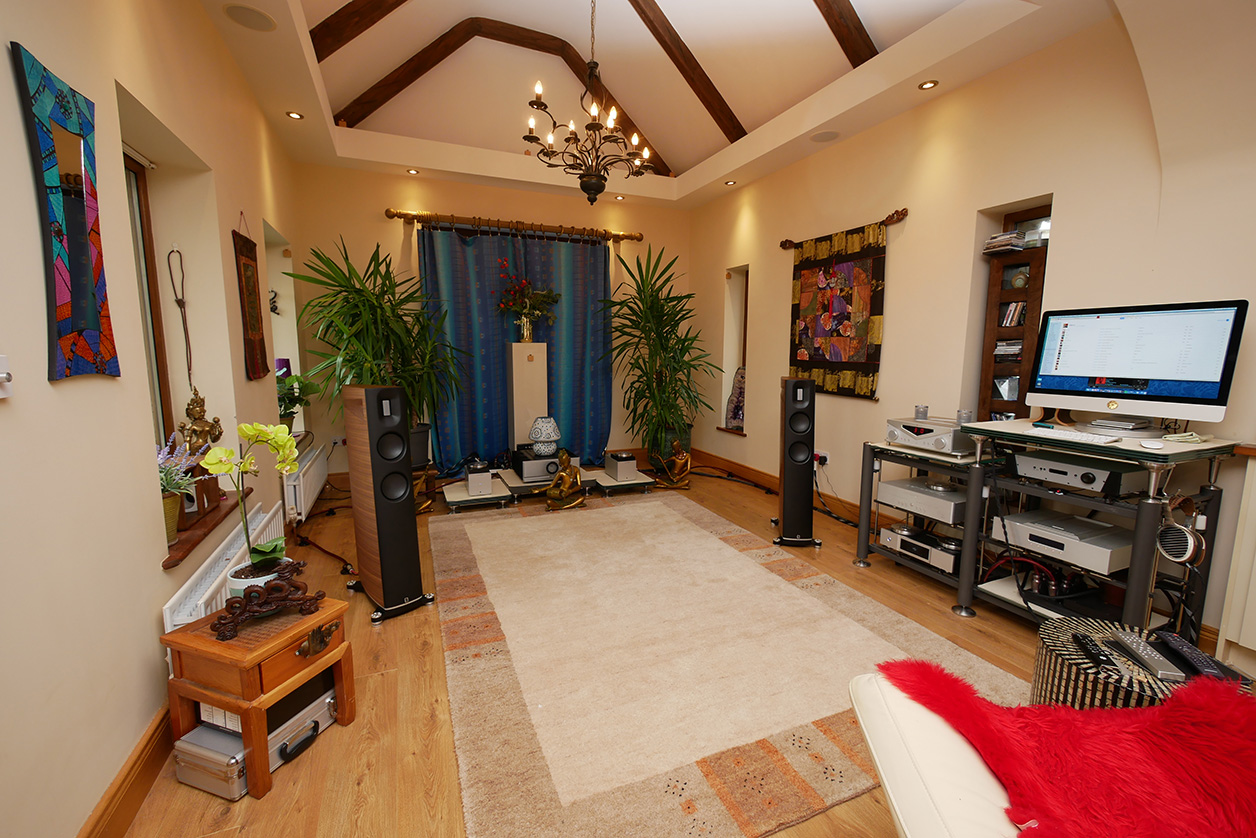 Now I took stock of the most promising candidates to build a 114 review system around. Given Merrill's design brief of speed is the need, our 900kHz grounded-grid Vinnie Rossi L2 Signature linestage with 120dB S/NR seemed ideal, either with 300B from WE/Elrog or VT52 and 50 from the same. To contrast amplifiers, I had the Purifi sample for class D which in a prior test had bested Nord's Ncore 500 monos and Auralic's older UcD 400 Merak. For class A/B, I had our LinnenberG Liszt, 200/400-watt into 8/4Ω pair of lateral Exicon Mosfet monos with direct-coupled 1MHz circuitry. For speakers, I'd use our customary Audio Physic Codex 4-ways. But I also had loaners of Børresen's 02 with ribbon tweeter and dual 4" mid/woofers of extraordinary specs. After having sampled those first in their Aalborg factory then our own system, they were guaranteed to be our speediest most pistonic transducers with lowest energy storage on hand.

Once the shipment was tendered, "the power cords included are the standard off-the-shelf job while the other is a $2'500 Genesis which to me makes the amp sound better. You decide if it is better and worth the extra cost." Here the reader is reminded that the 114 doesn't use a 20A IEC because the amp is a current hog—it's highly efficient class D after all—but because the pin layout of a 20A power inlet makes for a better mechanical fit, hence less wobble and a stiffer interface. "The amp is always on so connect everything first, then plug in the power cord last. The amplifier's control is very tight so soft-cone speakers won't like it. Because the amp is very fast, clean and low noise, try very dynamic music. It will stress some speakers but will always be fun. If you use DACs, use solid-state which is much faster and more dynamic, missing of course the romantic sound but is closer to live music as you know. I'm very proud of the detail and staging which is full 3D-layered depth, width and correct height. A classic test piece is the "Peppery Man" from Natalie Merchant; or "Sympathy for the devil" from the Rolling Stones Beggars Banquet album. If you have the Harmonia Mundi Le Nozze Di Figaro, you can almost picture the performers moving front to back, left and right on the stage. This is unlike other amps which simply throw the image flat on the front wall. It should sound holographic in other words." 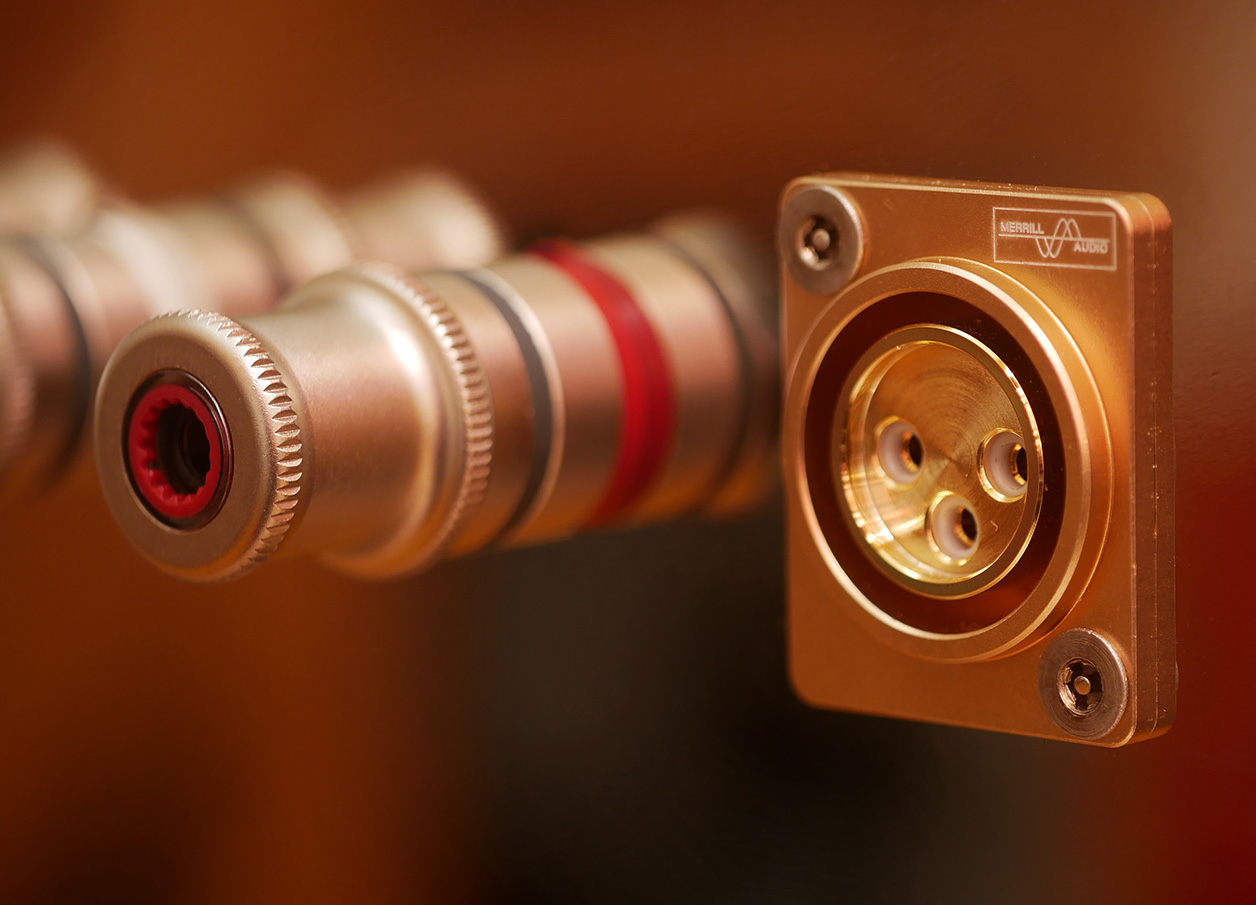 These bolt heads are the reason why no interior shots of Merrill Element amplifiers exist anywhere.

From the manual, "the 5" touch screen shows serial number and firmware version on power-up, then logo and model name. The display isn't pressure sensitive so a gentle touch is sufficient. Touch the top right corner to dim or brighten with one of ten looping setting. Once set, this is remembered until changed. Tracing a line across the center of the screen displays version and serial number again." With most accessible albeit tamper-proof bolts, I lacked tools to crack Merrill's shiner of a safe. I'd thus be far busier wiping off fingerprints than pursuing any interior shots unless Merrill proved amenable to submitting his own. "Unfortunately no inside pictures. The screws are one of a kind and specially manufactured so only one head per company. I do several things to move the focus on the sound rather than let trolls take over a conversation with things like switching frequencies of 1.5MHz which make no sense. Also, the parts used are very small to reduce component parasitics. If opened and a small spec of conductive material fell inside, it could easily short out or cause intermittent problems. Security screws mean I never have to deal with that plus keep my IP confidential on how I get this quality of sound."