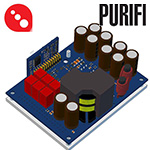 Actually, that's not what the emailer said. Instead, "you might have picked up some noises about me taking part in a new Danish project called Purifi. We combine work on class D amplifiers and speaker drive units specifically to reduce distortion in both. My partner Lars Risbo and I have achieved a roughly 20dB improvement over current designs in both cases. Sonically the impact is quite startling. We are gearing up to become an OEM supplier of drive units and amplifiers. A few key customers have already gotten samples to play with. So we decided it's time to go a bit more public." That was Bruno Putzeys, inventor of class D uCD/Ncore, collaborator in Grimm Audio, engineer with Kii Audio.

Behind Purifi, there's the already mentioned Lars Risbo who founded Toccata Technology which was later acquired by Texas Instuments for its PCM-PWM direct-digital technology. Lars holds more than 30 US patent families. There's Carsten Tinggaard, founder/owner of PointSource Acoustics, previous product manager at Danish Sound Technology and CTO of Tymphany where he was in charge of establishing the Danish R&D facility which worked on Peerless, Vifa and ScanSpeak drivers. There's Peter Lyngdorf of Hi Fi Klubben, Dali and Steinway Lyngdorf, a group with 1000+ employees and multiple factories in Denmark and China. Peter's background includes stints at NAD, Snell and TacT Audio. There's Claus Neesgaard who worked for Texas Instruments, Kim Madsen who also came from there plus developed military power modules for Alcatel's Ariane 5 Rocket and several Dynatech fighter jets. Finally there's Søren Poulsen again from TI where he owns definition and architecture development of the world's highest-power top-performing IC amplifier with 5 US patents. That's an amazing dream team with fantastic resources. 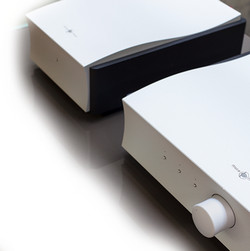 "Presumably this new class D tech will position itself above Ncore 1200 but remain a separate entity under Purifi rather than Hypex?" was my obvious question. At right we see Mola Mola's Kaluga monos as Bruno's own take on NC1200 boards adopted also by brands like Bel Canto Black and Nord Acoustics. Bruno: "Hypex and I separated amicably a while ago so they're not involved in any of the new work. Measured and sonically, the Eigentakt circuit is quite a step up in performance from Ncore. So we're indeed looking to establish it as the new high-end standard. Purifi is actually three entities – one that does fundamental research into both loudspeaker driver units and amplifiers, then two subsidiaries to commercialize drivers and amplifiers respectively.

"As you can imagine, we've been in early discussions with the usual suspects and response is pretty consistent, namely that they wouldn't re-engineer existing products but be happy to switch for new products. That sounds entirely reasonable. Actually more difficult is the product tier just below the top end. There a common response is "well, Ncore modules are available from stock and they're good enough, why take risks?" Either way, for a while we'll have to toot our own horn first by getting the right people to hear the modules in their evaluation kit, then report on what they heard. In the case of Ncore I recall that the only media outlet prepared to do a review of the evaluation kit was 6moons. Everyone else had a strict policy of reviewing only products in a form that end users can buy. Would you still be up for a review of a lab-grade demo?"

Hello Dolly. "Great! As soon as we can spare a demo unit, we'll make arrangements."