"When you remove the BB for with/without testing, I recommend putting them all back in the case with those spongy pucks on top. Then close the lid, place the entire flight case as far as you can and with all BB facing the ground (not a floor above some other audio system in the house) and not near a circuit breaker box or other lines. If you have too many rooms with systems, put the case in your car and keep it several tens of meters away. This will act like a better virtual on/off switch. This stuff knows no clear boundaries but does know direction. Afterwards wait perhaps 20 minutes until all the caps and circuits are saturated again by non-treated power. The Blackbody effect goes away even more gradually with a battery-powered device like a laptop to the point where you can carry around the fully BB-influenced charged battery and get the same sound until you recharge it with non-BB influenced power." 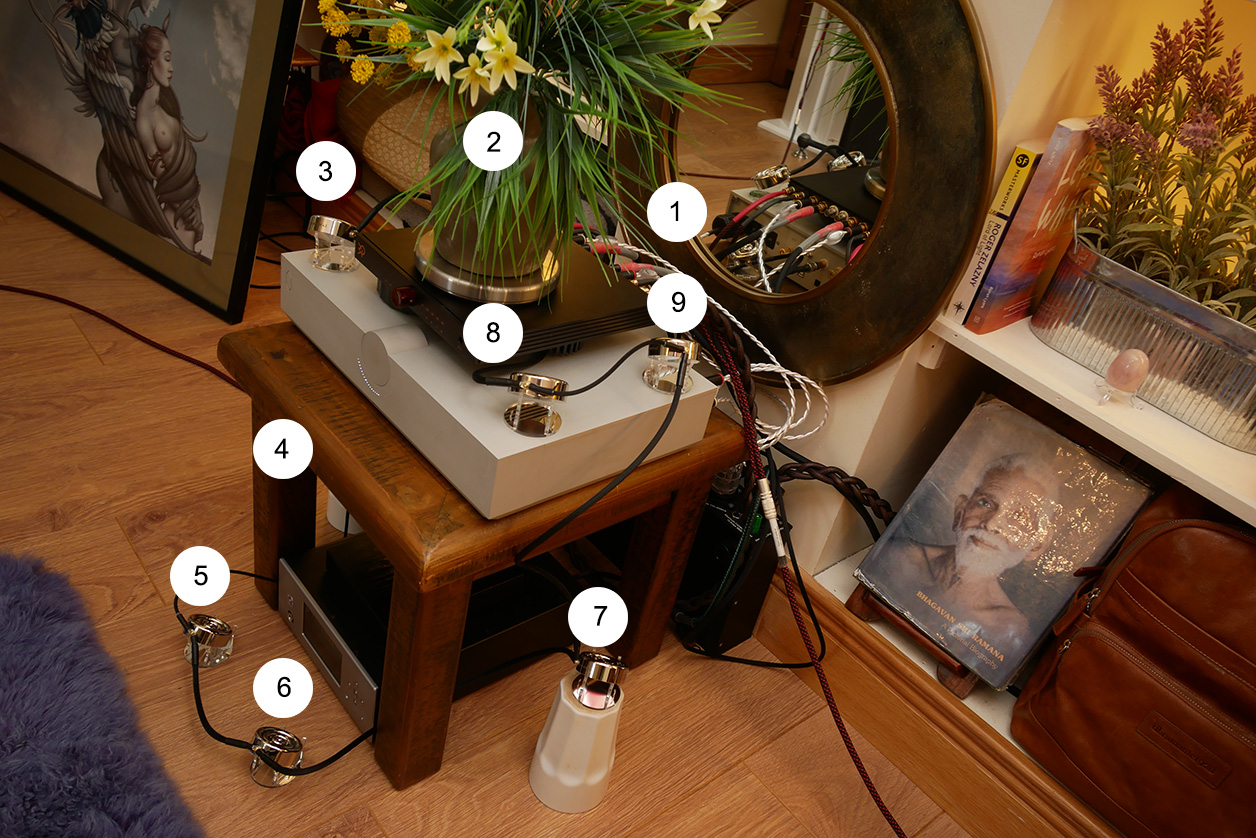 Given notice of a delayed effect's drain from all things DC powered, I had to redo my first setup. That had run a DDC/DAC combo with battery power good for 12+ hours of non-stop play. The AVC too used power-cycling banks of ultracaps. COS Engineering's D1 to the rescue to replace four components. Now we see the listening position stretched back to standard midfield. It shows how quickly seat/toe-in schemes are changed especially for small point-source speakers. Their type works brilliantly up close and is easily moved and rotated. With my après BB secured when the lot had gathered face down in the car as instructed and the upstairs rig 'drained' for 20 minutes to generate with/without contrast, I could pronounce my first judgment. 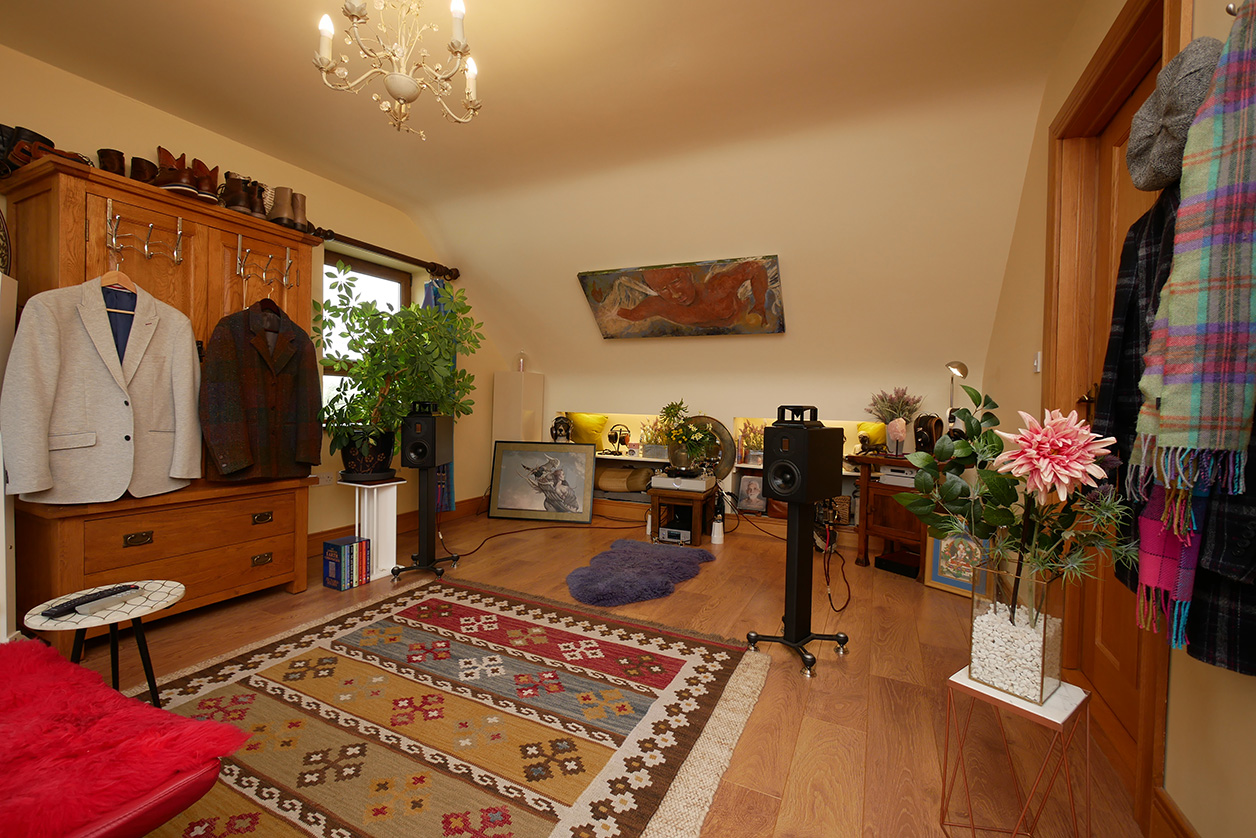 One, the effect had been noticeably stronger with the batter/supercap-festooned setup. It was milder in the second. Just so, what was the effect? Imagine air getting more humid. Decays linger longer. All tones seem bathed in a subtly golden glow. The overall sound gets softer, creamier, heavier and a bit slower. Strangest of all, the air—as much as we're usually entirely oblivious to it by virtue of its being invisible and tasteless—feels more involved in the business of conducting sound waves. As bizarre as it reads to certainly not be taken literal, it's a considered attempt at translating an unusual sensory experience into words. In general, the sonic gestalt expressed the now familiar LessLoss house sound. In particular, it added an unfamiliar viscosity which had me more aware of the airy medium as the transmitter of sound all around me. At $6'774 for the enabling hardware, I was merely hard-pressed to consider value. I'd not come across anything else that did this, exactly.

Downstairs I began without the discs to have my clear base line. Then the lot installed. Seven wired up on the source rack, one each without ground lead sat atop the amps. This netted two fronting the music iMac, two atop the USB bridge, two atop the DHT tube preamp, one facing the Vibex AC/DC filter. Over about 15 minutes, the effect showed up in full. Its magnitude was greater than upstairs N°2, not as great as upstairs N°1 had been. Again tone/texture grew more honeyed. Pace mellowed, timing gained elasticity. Again contrast made me conscious of a peculiar action whereby sounds didn't just passively rise between and behind the speakers but rushed toward me. Physically I sensed the BBs' radiating effect in my belly as a slight warmth. Once they'd become the new normal, I expected that sensation and the 'more active air' perception to recede from awareness. Right after the switch, their otherness still registered. 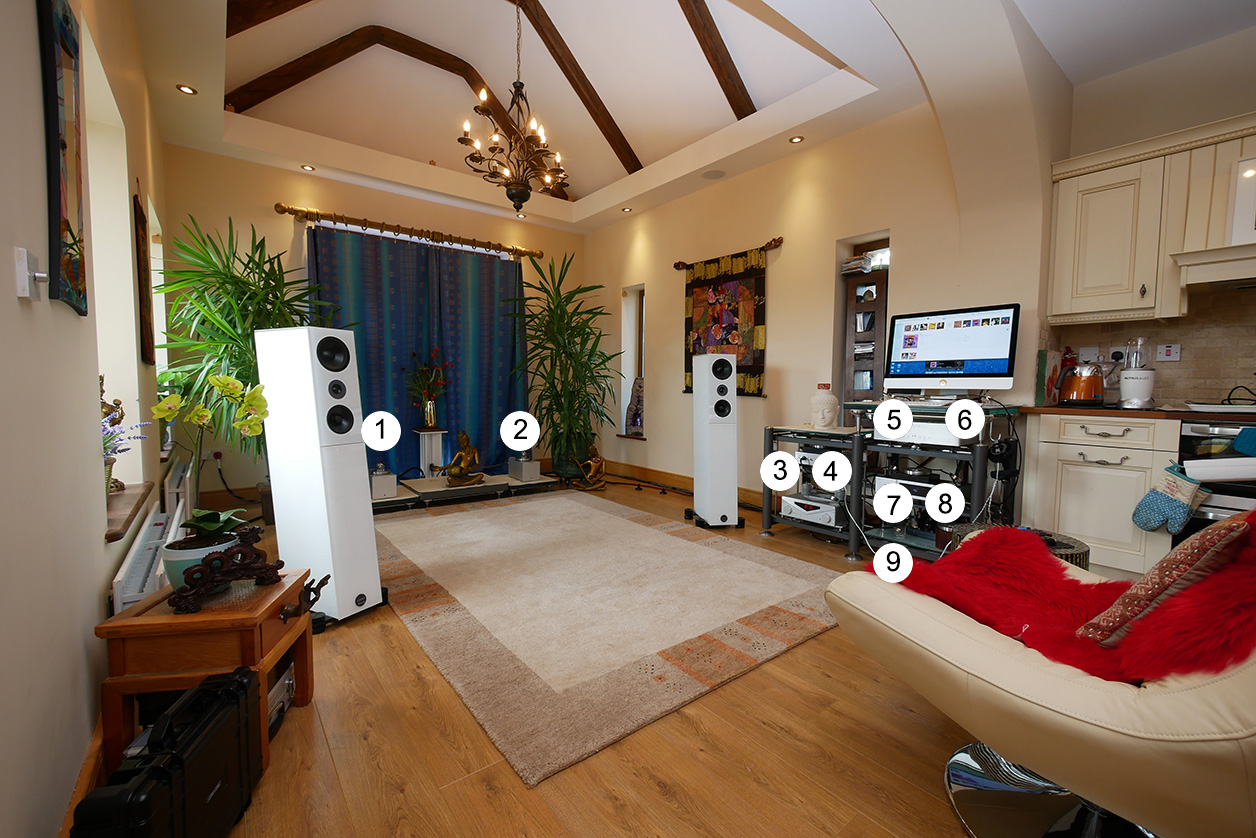