Hi-rez versus full rez. Despite what numbers warriors may imply, CD is not lo-rez. Lo-rez are various compression schemes like MP3. Those discard data which an algorithm determined is inaudible because louder sounds mask it. So that 'redundant' data is deleted to reduce file size. But it's not a zip file which expands to full glory during unzipping. It's a 300dpi image dumbed down to 72dpi. It's loudly lossy. But as one learns at a good industrial print shoppe, even a 150dpi image file enlarged to man-size banner can look stunning if the file combined sharp focus with high contrast in the first place like a premium recording. That's because one doesn't look at the final banner with a loupe to inspect stair-stepping pixels. One views it at the intended distance. By the same logic, the highest MP3 bit rate of 320kb/s can sound surprisingly good compared to CD's 1'411kb/s. The condition is that it be played back over a system whose inferior resolution creates the intended distance to chuck the magnifier. On a top system, MP3's high loss ratio is dead obvious. How about the opposite direction beyond CD where sample rates keep doubling? Are consecutive gains to be had? To find out, Aqua Hifi's Formula DAC replaced the Kinki DAC and D300Ref USB bridge. Being limited to 192kHz incoming data, both downsample 352.8kHz/DXD to 176.4kHz To hear native DXD, thus give USB the greatest potential advantage over CD, I needed a 384kHz DAC. This meant an iMac/Formula direct connection. Obviously this also eliminated the Soundaware's very real benefits. By design, that compromised the overall standard for USB. But since the CDTII Mk2 never benefited from the D300Ref, it just evened that score. 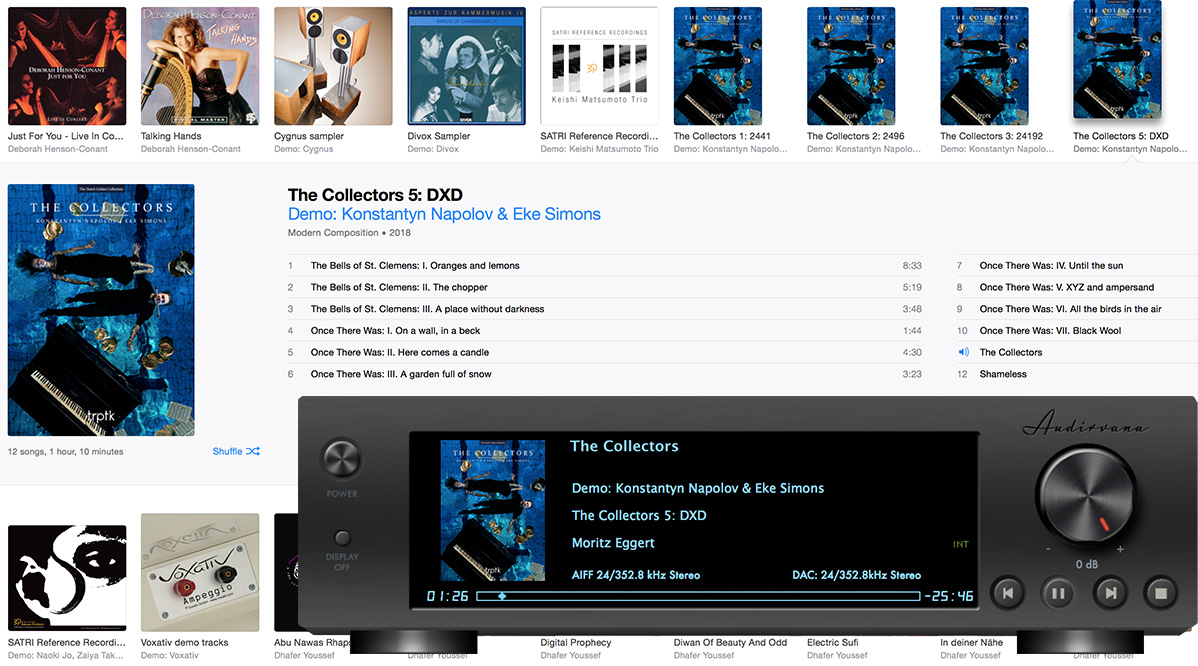 As the 'demo' tags on this cropped screen shot of our iMac indicate, this isn't music we listen to for pleasure. Wherein hides the whole crux of listening for sound (audiophile) versus musical content (music lover). One can obviously be both. There's no conflict. But they are different things and focal points. Personally, if the musical content doesn't speak to me, I don't care how good it sounds. It doesn't get played. Unless it's a review like today's. Pervy, innit?

Hi-rez proponents should have been unnerved by how close CD came in this experiment. The DXD file did sound a bit fuller, softer and more resolved particularly in the treble. This gave percussive metal work more spray-and-decay action and general tone more bloom to render CD slightly sharper/coarser by contrast. But if pure math predicted that data density six times higher should have pummeled CD to a bloody pulp, for the ear with our gear, it didn't. It just held a minor edge. This likely had two reasons. 1/ being an audiophile production in the first place, then a CD carefully stamped in a smaller run by a custom house who don't rush hundreds of thousands on a single order. 2/ USB off an iMac not having the benefit of our bridge to elevate it to LampizatOr/Lumin-level streamer standards. In my small test then, CD had the advantage up to 24/96 off the same master. Only 24/192 and DXD eclipsed it by that small margin and at that were virtually indistinguishable from each other. 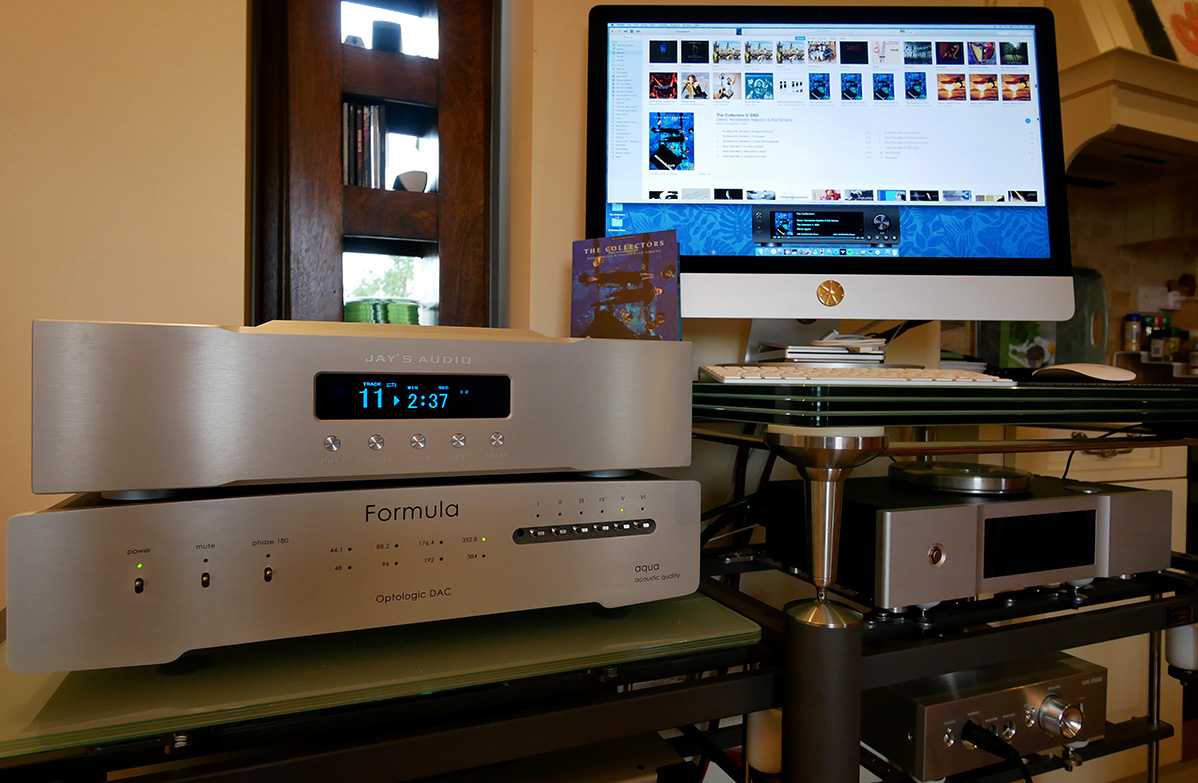 If any conclusions can be drawn from so isolated a test, I'd suggest that production/mastering quality trumps sample rates by a fierce margin. Premium CD or their files show up lesser 24/192 efforts. Hence hi-rez is mostly overridden by recording/mastering engineers paying proper attention to 16-bit/44.1kHz because artists/labels are selective and willing to pay for the extra time. Standard RedBook done right is capable of extraordinary sound. That's shown on The Collectors, on Tony Minassian's Drums & Bells with its stunning 50dB+ of recorded dynamic range and many other examples which properly exploit the RedBook standard. Long live CD off a CDT2 MkII? Unless one elevates PCfi to level with it in the first place, absolutely. As to the theoretical advantages of hi-rez files generated with the same care as superior 16/44 productions, they seem real if more marginal than expected. But under ideal conditions, USB audio can eclipse CD playback. The real question is, how often can most listeners create those ideal conditions? If you're a sound-first type, it's far more important to pursue labels/artists with high standards than RedBook+ files from the middling majority. And it's far more important to optimize your USB audio installation in the first place or plain CD will whup ass on your proud DXD files.

Reality checked off. Let's add up my own auditions, Terry London's comments and eight years of preceding personal PCfi investigations started in May 2010 with the Weiss DAC2. I conclude that whilst USB audio surely made progress in the interim, so must have CD playback. If I believe that over those eight years our resident USB-sourced installations improved (I do), the current one really ought to have eclipsed optical disc, demonstrably. But it did not. That and Terry's findings—how for him, the CDT2 MkII outclassed transports of top pedigree—suggest that during his decade of concentrated work in this niche sector, Jackie Ho still advanced what most of us considered mature tech maxed out, static and at its end. Instead he must have pushed CD playback further. There's no other explanation. There's mature. Then there's more mature; if one bucks down and spends the years mastering the minutiae, apparent market trends for CD-only transports be hexed.

For CD resolution files, USB/networking decks like the recently reviewed €6'000 LampizatOr SuperKomputer or €13'000 Lumin X1 do compete head-on with Jackie's €1'650 disc spinner. To my ears, they simply don't outperform it. They just match it. Likewise for our resident iMac/Audirvana/D300Ref combo. It's only when one delves into authentic not retroactively upsampled hi-rez files of superior production values that headroom potential beyond 16/44.1 RedBook opens up. But pursuing a system around the notion of wanting to exploit this headroom regularly relies on one's musical tastes overlapping with the existing hi-rez catalogue. My tastes don't. For our thousands of RedBook albums which make up six nines of our library, USB audio remains first and foremost about convenience. Thousands of CDs no longer clutter up the living room. They store safely in the barn for backup. Convenience means unlimited playlist assembly, instant access to terabytes of tunes and the ability to download and purchase music that never made it to CD or was domestically stocked. Such files download at midnight on a Sunday from labels in Istanbul or Mumbai; or artist-direct through BandCamp.

Clearly convenience can coexist with sterling sonics. There's no good reason to not enjoy both despite what anachrophiles might preach. To them convenience and lifestyle are dirty words in eternal conflict with performance. But it's humbling to know that such anarchists would have a point buried deep in their rhetoric. Anyone spinning CDs on the Jay's Audio transport will enjoy sound every bit as advanced; do so for significantly less outlay; and with far less complexity and zero networking issues. Once I add tank-like build and Jackie's clever lift-out-and-swap scheme which elevates long-term ownership to the status of no-brainer, an award is the only outcome honest and fair. One must admit that's impressive implementation for the Philips CDM4 single-beam swing-arm transport last seen in commercial CD players from Philips and Marantz during the early 90s. It's like a class reunion 20 years later. Everyone's gotten older and fatter. Only the geek is still the geek, looking better than ever, trim, tan and happy. Did for him time stand still? Did he undergo secret stem-cell rejuvenation in Switzerland? It's puzzling to put it mildly; and rankles just a bit. 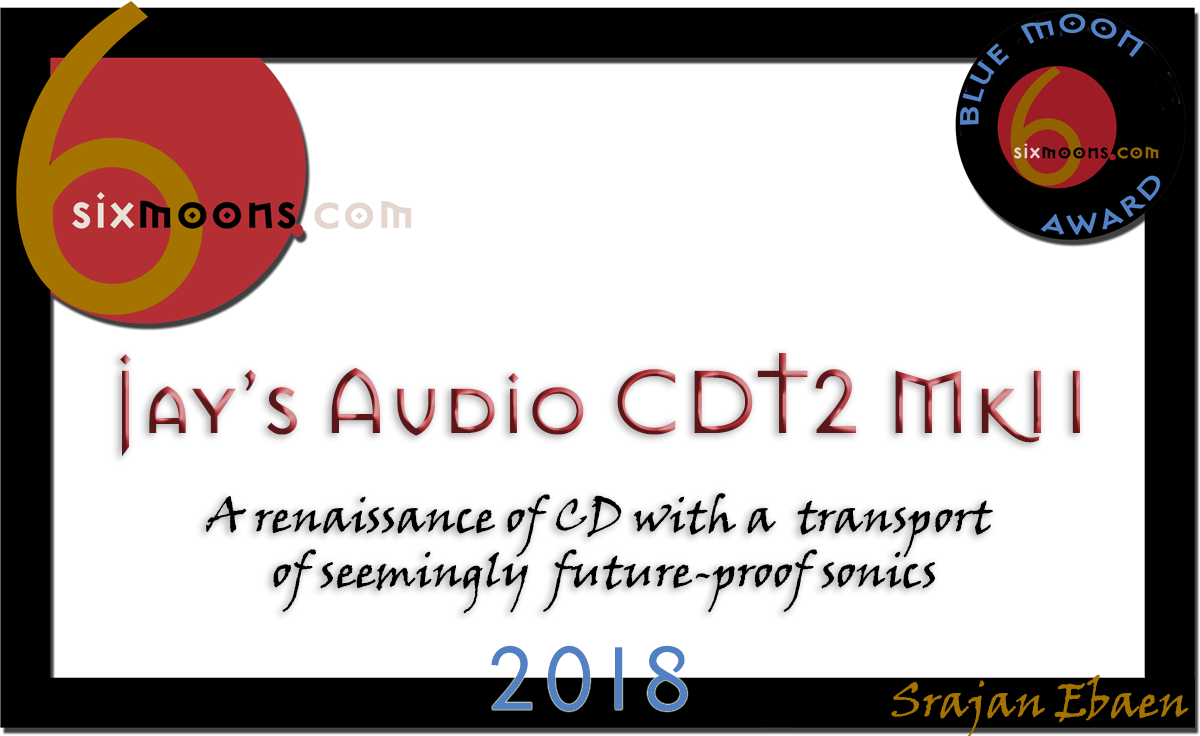