Yeah but I hear you crow. What if the transport fails as eventually, all moving things like our own tickers do? Now I have to ship back this big heavy deck to Alvin in Singapore for surgery? Far from it. Just remove the top cover, unplug two ribbon cables and presto, the entire transport assembly lifts out. Even a child could do it. Jackie very cleverly just seats it in his rubber-filled pillars. Four bolt ends prevent it from slipping out sideways. Rubber strips on the underside of the cover press firmly down on it from above. Despite no firm attachment, nothing moves even if the deck were sat on end. Should something go bad, Jay's Audio will simply ship you a replacement module in a small carton. I'd not seen such a simple swap'n'plug solution before. It really ought to silence all worries over eventualities. If you can work a hex key to undo eight bolts, you can handle this. Open-heart surgery for dummies.*

* In this context, an email from Nagra fan/owner Michele in Rome is instructive: "Rank prejudice? You’ve always had it in for the Nagra CDP. I wonder why. Actually, it mounts a Philips CD-Pro. As I wrote you, I had a new one installed a few weeks ago, quite unnecessarily as it turned out. Matthieu’s stock trick during his time as a sales rep was picking up the player by the open transport and swinging it around nonchalantly." I answered him with "I have nothing against the CDP per se. I just find its CD-Pro mounted atop the ejecting sled an unnecessarily over-engineered bit of show-off-manship. And that comes at a very real price when a far simpler top-loading implementation of the same drive would achieve the same. Unlike the Jay's where a child could replace the transport module if it went bad, a Nagra must return to the factory. To me neither that nor the extra cash paid for a piece of superfluous engineering extravagance are attractive. That said, Nagra really went to town on their mechanics to make them virtually bullet proof. Someone once said that it ain't bragging if it's true. I think that applies here." To which Michele replied, "of course it’s engineering show-off grande complication style. Never found a source to match it though, up to and including the earlier dcs and Esoteric stacks." 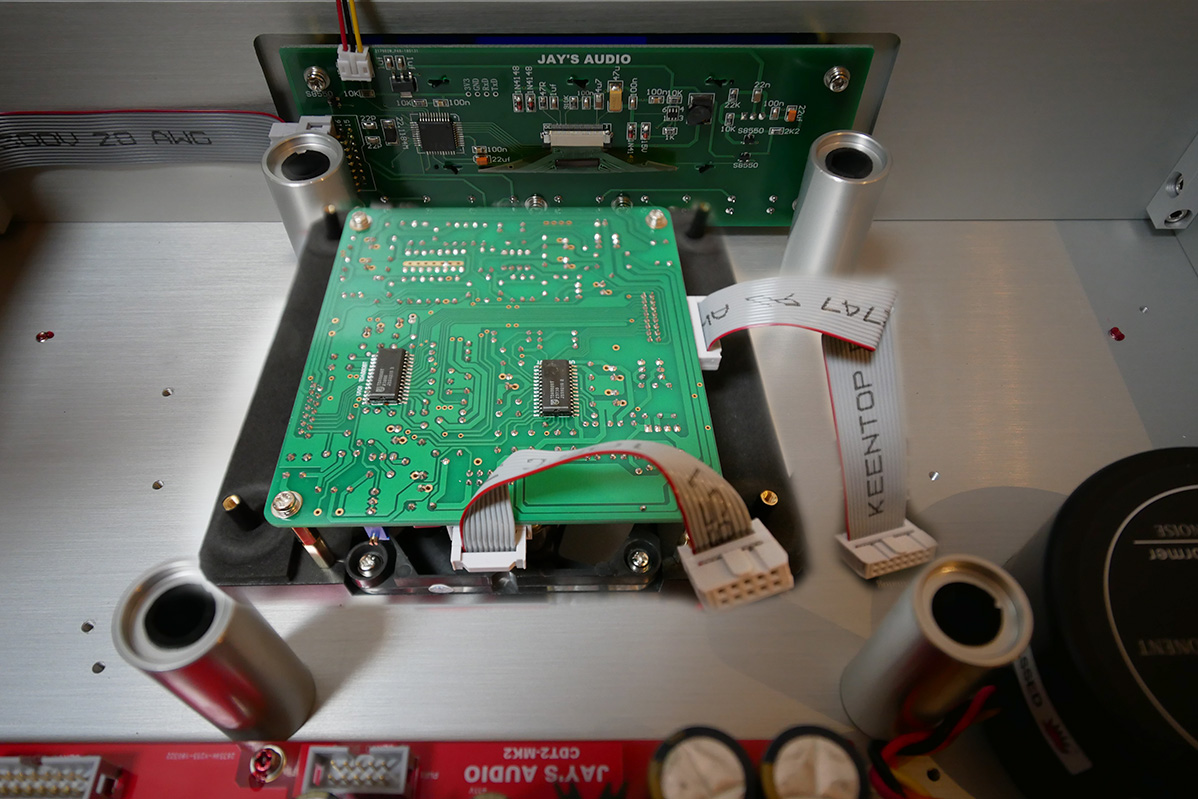 Time to put the lid back on things and walk the deck into the big system. Here's a parting shot at its 4'000MHz crystal oscillator.

Sat atop Alvin's Kinki Studio Vision DAC-1 for easy cable swaps with the alternate iMac/D300Ref source also using AES/EBU to keep the wiring identical, TOC read-in was quick. It led the bright blue display to show all available tracks in small numbers, with the current one blinking. That also duplicated large to front the time counter. Custom A/B segmenting and the usual repeat modes were accessible from the remote. Its 'display' button had no effect on brightness. Like ± volume and 'power', those buttons had to be specific to other models. Due to new hazardous materials regulation and having been fined €50 once before, Alvin no longer ships the remote with batteries installed. Those the customer provides; another simple matter of just six screws this time.

To fe or not to fe? Old Hamlet would have been stumped. Hvad fanden? That's Danish for what the hell. Before I clarify, we backtrack to set the scene. As explained in my review of the Soundaware D300Ref D/D converter, its subsequent acquisition ended a multi-year iMac improvement 'project'. Project sits in quotes because after having reviewed a number of costly so-called audiophile servers, I never heard a performance delta sufficient enough to justify change. There were small sideways differences but no decisive step up. This undermined any personal urgency I might have felt at the onset. At €2'850 rather than a few multiples thereof like the posh servers, the D300Ref finally did step up without reinventing Apple's greased wheel of functionality, mega screen and elegant hardware. So I don't use Soundaware's networking features. I merely exploit their super-cap powered reclocking and jitter stripping as a USB bridge. Audirvana 3 buffers music to 32GB RAM. That spins down the FusionDrive, bypasses iTunes and spits out bits via the iMac's USB port. Now the D300Ref does its thing, then forwards the dry-cleaned bits AES/EBU to our DAC. For ultimate performance, I drag'n'drop files to SD card, then power the iMac down and convert the D300Ref into a pure SD transport in its menu. Then its display and IR remote facilitate navigation and selection of a card's folders not so different from the CDT2 MkII's remote. This set the scene. My first comparison pitted proven USB bridge mode against Jackie's spinner. Time to spell it out for Old Hamlet: to feedback or not to feedback? That was the real question.

It's because the sonic difference mirrored the difference between zero negative feedback and ~10dB as one might set on a SET. Though 10dB is far lower than what class D uses by design, compared to zero feedback it still renders the sound drier, tauter and less free. 0 NFB plays it with more gush, elasticity and bloom. Here we disregard the slew of related effects as they apply to typical valve amps, i.e. higher distortion, looser bass and tonal-balance shifts. In today's face-off of digital transports—both driving the same DAC via balanced S/PDIF—the only aspects which figured from the feedback equation concerned musical gestalt. The CDT2 MkII played it without any virtual feedback. The iMac/Soundaware combo injected it. That was akin to the modest top value a conservative valve amp's NFB controller allows. But that difference was audible just as it would be with a SET. Jackie's RetroFi proposition was more fluid, billowy and airy. Our optimized PCfi alternative was drier, more damped and tensioned. To put Hamlet's ghost back on the microphone, hvad fanden? For substantially less coin—-€1'650 vs. ~€6'000 for iMac + D300Ref which doesn't yet factor an extra top Allnic ZL3000 power cord and quality USB cable like our double header red KingRex—the CDT2 MkII played every bit on the same level of resolution. Then it proposed a clear difference in gestalt which the right listeners would call flatly better, more persuasive and compelling. Was PCfi better? Not! In this installation arrived at after many years of steady experiments, the Audirvana-optimized Soundaware-polished iMac certainly wasn't embarrassed. But neither was plain old physical RedBook outclassed. I believe that a majority of listeners would have favoured it for its 'zero feedback', never mind its far lower cost of entry. How far had computer audio really come? Put to that question, I see Hamlet's shimmering ghost strategically fade to nothing at stage right. Not to be was far more advantageous just then.

The next sessions pitted SD vs CD. Here the delta of difference narrowed. On complex polyrhythmic fare focussed on staccato elements, I could in fact no longer latch on. But on legato facets like bowed violin, human voice or an elegiac trumpet behind Miguel Poveda, the difference still factored. CD was fruitier, more luscious and gushing. This even held when I copied a 15-track playlist to CDR. Back in the days of EAC and black/gold blanks, Dutch contributors Marja & Henk and I were agreed. Quite regularly, a copied CD could sound better than its original. Others had similar observations. We read a few theories on why. The most rational was poor pit formation in mass-stamped commercial CD vs. the read-until-right process of acquiring such an inferior disc's data on a PC's CD/ROM drive. Burning it at the slowest speed to a recordable disc creates crisper pit shapes, hence less laser jitter and error correction during playback. Be that as it may, by 2018 and living in rural Ireland, even obtaining blank CD media had become dicey. Selecting from various audiophile brands was history. Still, even my generic blank media burnt on a €79 Apple USB Super Drive generated the same results as our commercial pressings. Even CDR had it over SD which has it over USB.

Beyond sonics, there's obviously the vast subject of convenience. It's epitomized by Roon. Locally stored music is amalgamated with cloud-based libraries via sundry logged-in subscriptions services and Internet radio stations. This offers instantaneous access to literally millions of tracks with full playlist creation, cross references, liner notes, artist information and more; all at a swipe or tap on your tablet remote. Compared to that universe of choice/information, spinning a single CD seems archaic. Saying so keeps it real. And there's still the promise—suspicion, anxiety?—that high-resolution audio data encoded at anything more than 16-bit/44.1kHz could soundly trump CD. Think 24-bit/44.1kHz all the way up to DXD or high-rate DSD. Whether music you want to listen to actually exists there to buy/rent is another matter. Personally, 99.99% of our library is CD resolution. But there's software upsampling, even resampling from PCM to DSD. Dawid Grzyb's review of the iFi Pro iDSD is of a €2'990 DAC capable of 'remastering' PCM to DSD1028, on their FPGA chip, on the fly. If fed S/PDIF off the CDT2 MkII, it'd do the same for CD. And a DAC like the Kinki automatically upsamples all 44.1kHz data to DXD anyway. That doesn't add data but pushes conversion artifacts well beyond the human bandwidth to simplify the reconstruction filters.

How about comparing an actual DXD studio master to its downsampled file versions, finally a carefully stamped CD? Aside from its built-in convenience advantage, would PCfi hold any sonic advantage then? Would more data-dense files mean appreciable sonic gains to make up for their far higher impact on storage memory and download times? Could DXD vs CD show a delta fit to crow about? Of course that's an idealized show-down with little relevance. How many DXD masters are available of your favourite music? The entire hi-rez movement is badly crippled by the very limited choices in its libraries; by how available content is routinely of extremely niche appeal. If such fare means as much to you as a turd and/or was poorly mastered, polishing it up in hi-rez won't matter. Still, could a 6GB DXD master show up its 700MB CD equivalent in any aurally significant manner? Then one could at least say that, under ideal conditions, PCfi also holds a potential sonic trump card and not just the stacked hand of convenience nobody can seriously question.