To inspect expectations, what would yours be after reading about what this driver does different, how it does it and why? Tom Nuyts: "A lot of this data is culled from Dr. Klippel's research paper on the topic and on page 65, he recaps all of it in a conclusion. Our first diagram shows the physical parts of a typical dynamic driver which cause nonlinear behavior i.e. distortion.

"The next graphs show the typical distortion mode related to the suspension (counter force equals compression thus nonlinear behavior) and its effect on the X/I response curve. That shows the excursion of the cone relative to current. You should expect the same amount of cone excursion at each step of, say a 0.5A current increase. But due to compression from the suspension, this isn't the case (purple line). With our LEMS, it is the case (red lines) and with Magister, it's even adjustable.

"Now we see a better way of demonstrating X/I because negative current should impose negative excursion. The compression is the blue wave. The red one has no compression. The second graph shows what it does to a low-frequency sine wave.

"Here we arrive at electrical nonlinearities, the first being BL or force factor. In general, the force of the driver's motor as its magnetic assembly with the coil inside decreases as the driver is pushed harder. That's because the coil gradually leaves the magnetic field to reduce flux. On top of falling force, there is another nonlinearity because the magnetic assembly of a driver doesn't mirror the flux changes on the positive and negative side of the magnet assembly. You see the typical BL graphs of a ScanSpeak 18W and Seas 18M as drivers which are typically used in the price range of our speakers. 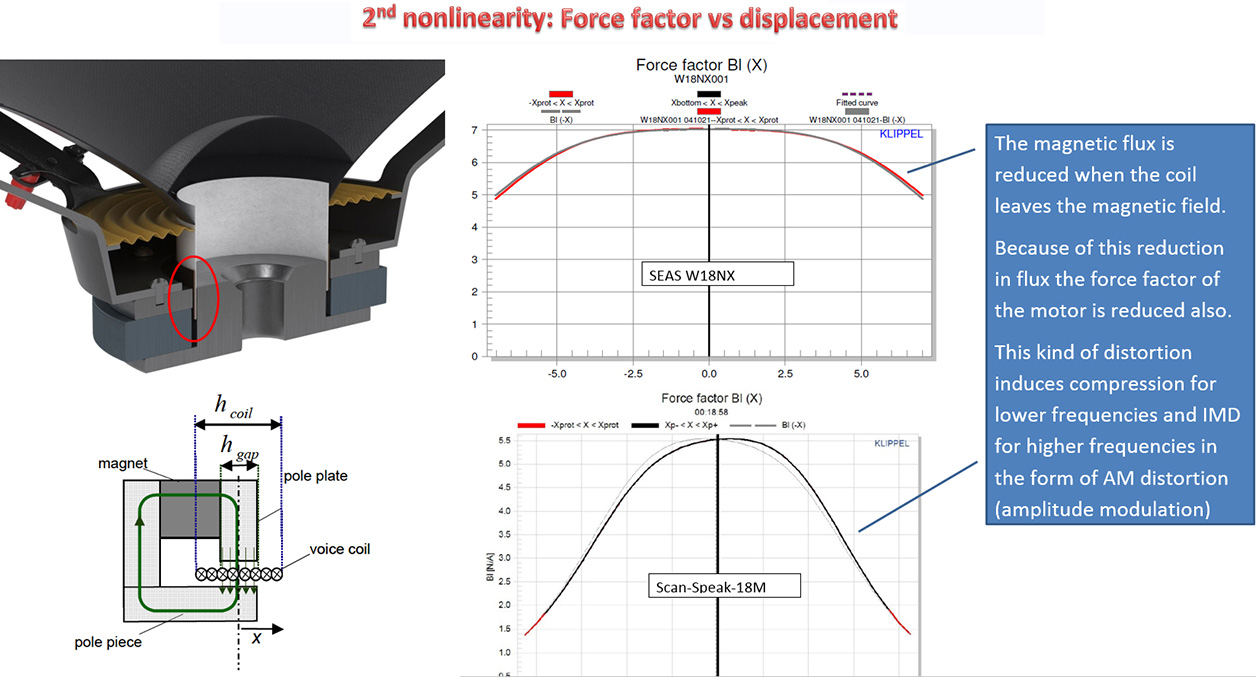 "Next we will see the BL graph of our driver with the white line. That's an actual measurement, not a hand-drawn line! You see that we too suffer a decrease in force when our coil leaves the magnetic field. We solve this with our suspension. The orange line shows the force of our suspension which pulls the cone back to its neutral position, thus replaces spider and surround. If we made our suspension itself 100% linear, the result of BL (white) and suspension (orange) would lead to a decrease in excursion at increased current (the X/I curve would not be a linear straight line). So we compensate the loss of force (BL white line) by reducing the counter force of our suspension at the ends of the excursion. This is shown by the green line. You see the power of the suspension decreasing when the power of the engine decreases. This is exactly the opposite of what a traditional suspension does."

"As the suspension is a force that works against the motor, the sum of both forces (engine + suspension) results in virtually linear performance for our driver; 99.7% to be exact. You can see this in the second graph. The result is virtually zero compression but even more importantly, no intermodulation or amplitude modulation distortion. Below you see what amplitude modulation does to the high frequencies. While compression is a result of low frequencies, its effect is the most noticeable at high frequencies. That's why 3-ways exist but those have other issues like phase, comb filtering etc.

"Here is another electrical nonlinearity. We see the impedance plot of a typical driver (blue line) as it is classically represented. What is never shown are the green and purple dotted lines.

"Those represent the impedance at the positive and negative sides of the cone's excursion. Clearly the impedance is not linear so becomes yet another form of distortion. Shorting rings remedy this kind of distortion to a certain degree but we built the LEMS perfectly mirrored so our impedance is 100% linear. In the left graph below we explain the purpose of our current-based power supply.

"This gets us at the Doppler effect which causes a lot of distortion with most 2-way speakers we know of that use directionally positioned drivers. The drawing explains what Doppler is and how it affects 2-way speakers. Doppler is only measured and active in the direction of the moving object/cone. Because our driver aims upwards, the distance of our cone to your ears doesn't change with excursion. So we suffer the Doppler effect about 300% less and don't create intermodulation distortion."