For free-field splendor albeit at implied lower resolution—there simply was no way to compete with two small open-back ribbons in extreme proximity for zero room loss—I used the same signal chain ending in our glass-clad white Audio Physic Codex. Those are 4-way designs with hidden internal woofers to in this room approach 25Hz. 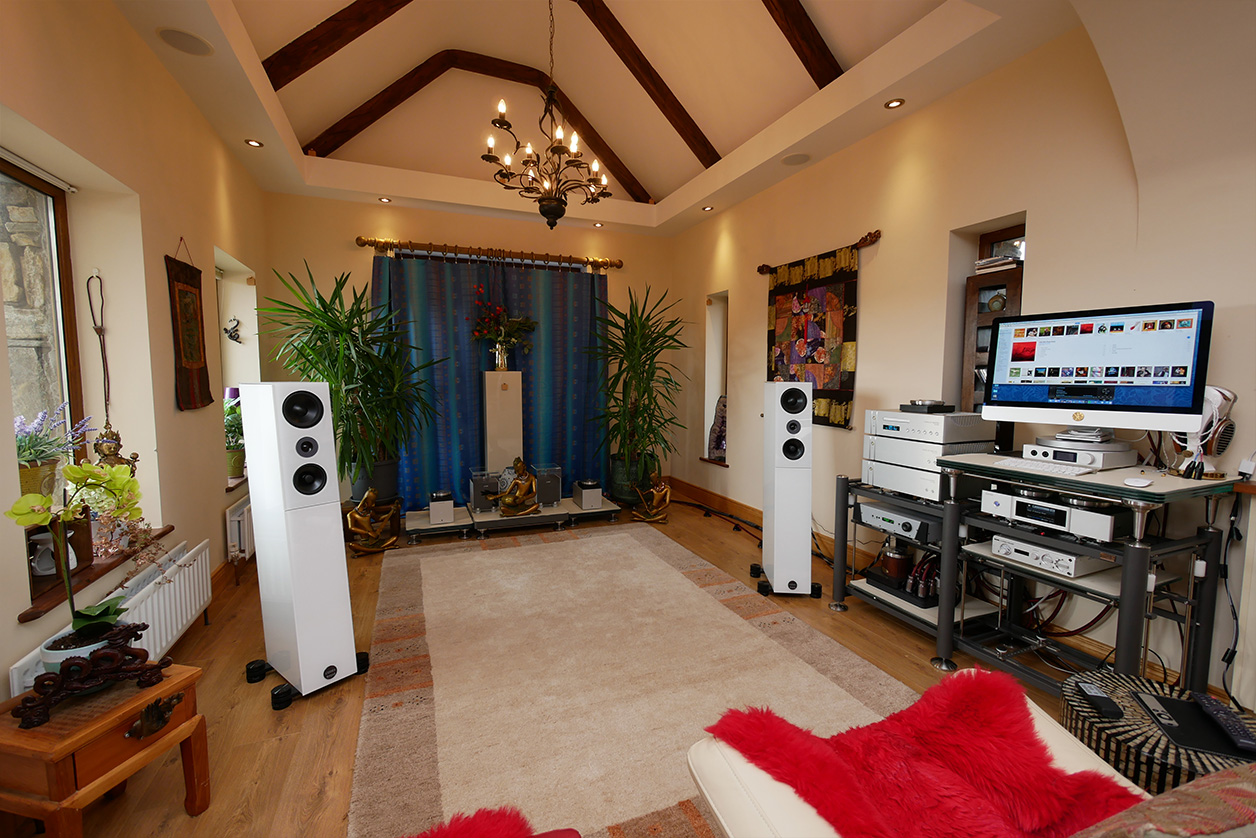 CD1000 + PSU-1000 versus CD1000 + Tube-1006. The first pairing dug deeper into micro detail and separated out stronger. This benefited depth of field for more specific layering with higher image localization and lock. Leading edges were more defined. Microdynamic flickers were more pronounced. The overall musical tempo felt brisker. The second pairing was softer and less detailed. It was temporally somewhat lazier. This emphasized flow and connective tissue. The latter is the sentiment of things hanging together, not being teased out/apart. Edge limning downplayed in favour of more water-colour transitions. Colours were more multi-hued and half-shadowed, less primary. Imaging was thicker.

CD1000 + PSU-1000 + Tube-1006. Adding external power to the tube outputs retained the latter's hallmarks of a more legato than staccato movement through time. What invigorated were dynamic responsiveness and insight into those micro data which recreate recorded ambiance. If I did just two chassis, I'd do the PSU inside the context of the above system which usually sees no valves. I'd favour the gains in definition, detail and grip. Yet moving to three chassis added an attractive ease above and beyond the power supply's own contributions which was hard to deny. It maintained that difficult balance of fine detail against greater fullness, of musical energetics plus that more relaxed easy-going flow. That said, at slightly higher than mellow levels, dynamic cresting rather behaved as though it had found an extra gear for real Sturm und Drang antics. That was massive fun on big stuff which now showed off more violent voltage swings. I'd call this particular quality of next-level dynamic scaling the key advance of hearing in triplicate. 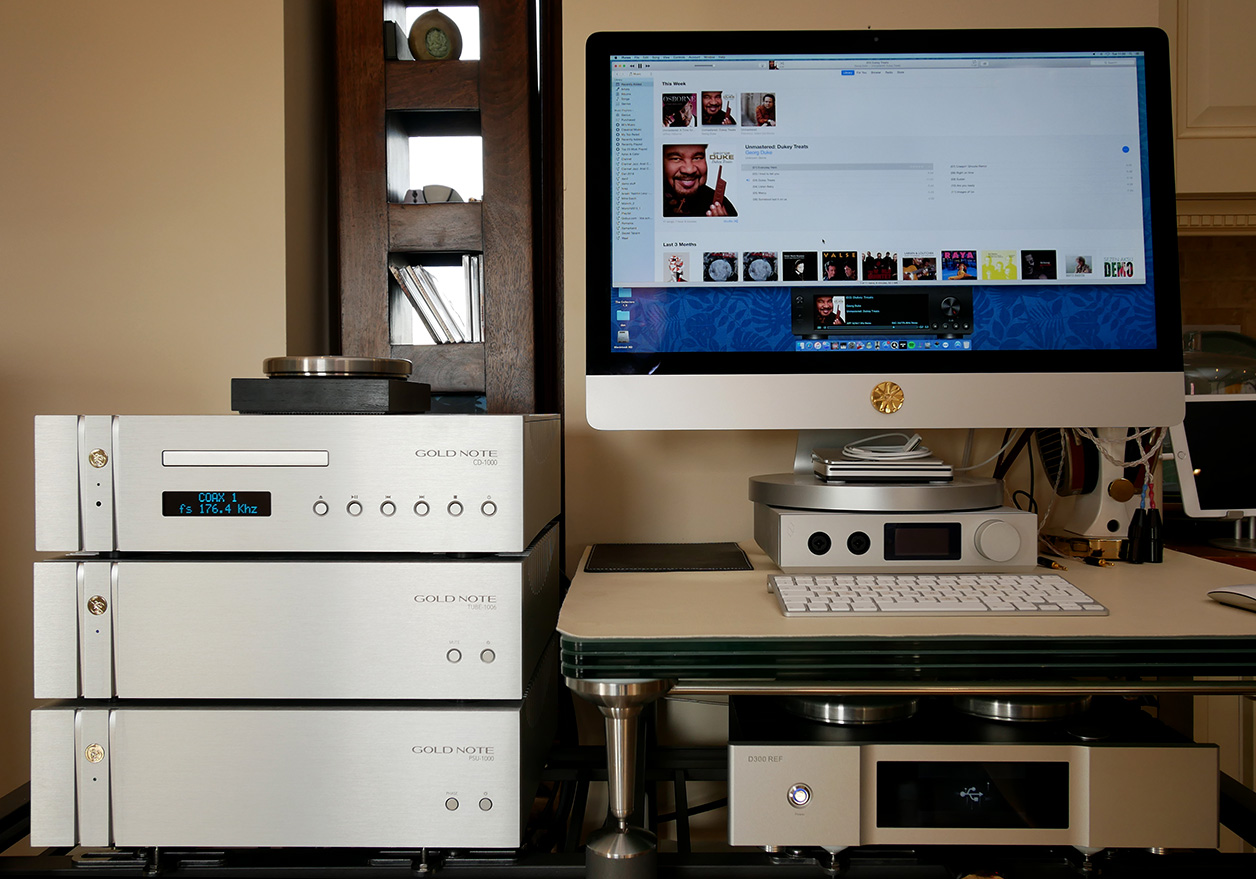 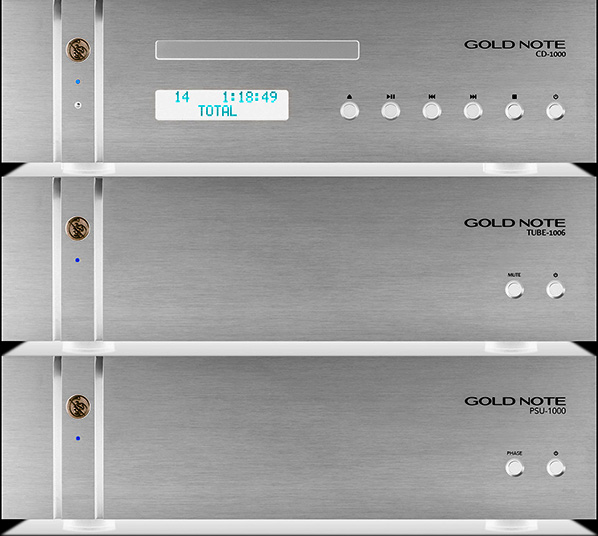 cap, today's review was about the analogue half of digital as its power supply and output stage. Upgrading either had demonstrable sonic consequences. Gold Note's massive and very heavy add-on inductive power supply enhanced low-level detail magnification by presumably lowering the noise floor of the entire front end. It also enhanced bass power and dynamic mobility by likely delivering higher instantaneous current. It tightened up the reins to increase definition and impact. This had the side effect of subjectively accelerating or energizing the musical forward momentum.

On its own, the six-tube stage with its low 3dB of voltage gain behaved softer and gentler. It slowed down subjective drive to feel more relaxed and suspended rather than driven and anchored. It emphasized between-the-notes stuff. The PSU's extra detail had served higher separation instead. With the valves, overall weightiness increased but impact, incision and focus mellowed. Tone colours were more multi-hued as though the sonic scenery had acquired more half shadows.

Appending the CD-1000 MkII with either outboard option altered its solo sonics in these two disparate directions.

Putting it all together into a triple shot allied the tube virtues of flow, ease and density to greater grip and resolving power. Particularly dynamic explosiveness gained greatly. None of it had crap-all to do with DSD 1028, 768kHz PCM, mass-paralleled chips or discrete R2R. All of it had everything to do with plain 16-bit/44.1kHz RedBook fare which Audirvana 3 occasionally upsampled to 176.4kHz.

The general lesson to take away ought to be crystal. Compared to the narrow differences which digital filters and sundry converter chips will make when you really pay attention, the seriousness of a digital deck's analogue elements far dominates these difference games. These design elements are, to quote George Bush, the big deciders.

The particular lesson to take away is that Gold Note's all-out player/DAC is one beast of a performer. At €11'240 all in, it's big-time stuff both physically and fiscally. But unlike near all the competition I'm aware of, this ascent to the top can be divvied up across three base camps. There you hang out and enjoy the views until more money arrives to take you higher.

Better yet, it doesn't matter whether step two is the PSU-1000 or Tube-1006 (and there's still the Tube-1012 option which we left out of consideration.) You decide which flavour to pursue first before the last step wraps it all up with a bow. What this review did can equally be done to Gold Note's 1000-series streamer, preamp and integrated. This multi-tier upgrade path can be applied across the range except for their power amplifier. That really is a unique selling proposition. It's also a rather forward-thinking strategy. Way to go, Golden Squad of Florence!