Reader JD: "I wrote you a few months back asking if the Pass XA-30.8 would have enough power to drive my Dynaudio Special 40 (86dB, 6Ω) and replace my 300wpc Bryston 4B SST² which due to reading certain hifi mags I thought was necessary. I bought the Bryston without hearing it, then decided it was not for me. It was just too clinical/sterile and too harsh in the treble. After reading your and other excellent reviews of the XA-30.8, I thought that it might be the amp for me in terms of sound but I cannot express my nervousness as it was instilled in me concerning its power rating. My email to you alleviated my fears to a degree and I started saving. I found an Internet dealer with a good return and great upgrade policy. Since then the XA-25 was released and your review of it very intriguing. An email to Pass, about their two lowest-cost models, determined that the less expensive XA25 would likely match better due to I believe low-impedance stability and a higher damping factor. I've been listening to the XA-25 for the past few days and am delighted. It makes an amazing difference from the Bryston with more color saturation, much better timbres, more differentiation in bass tones and less strident treble. All that and it is still clearer or more transparent. Most of all, it is significantly more musical. And now I know it is a very stout 25wpc and I had nothing to worry about. It sounds just as powerful as the Bryston and has plenty of gain for my small room. I thank you for not only helping greatly to alleviate my fears but for the superb review that led to what may be my most satisfying hifi purchase. The music from my system is for lack of a better word much more musical. The change brought on by this amp is uncanny. I had no idea such differences could be wrought from amplification. 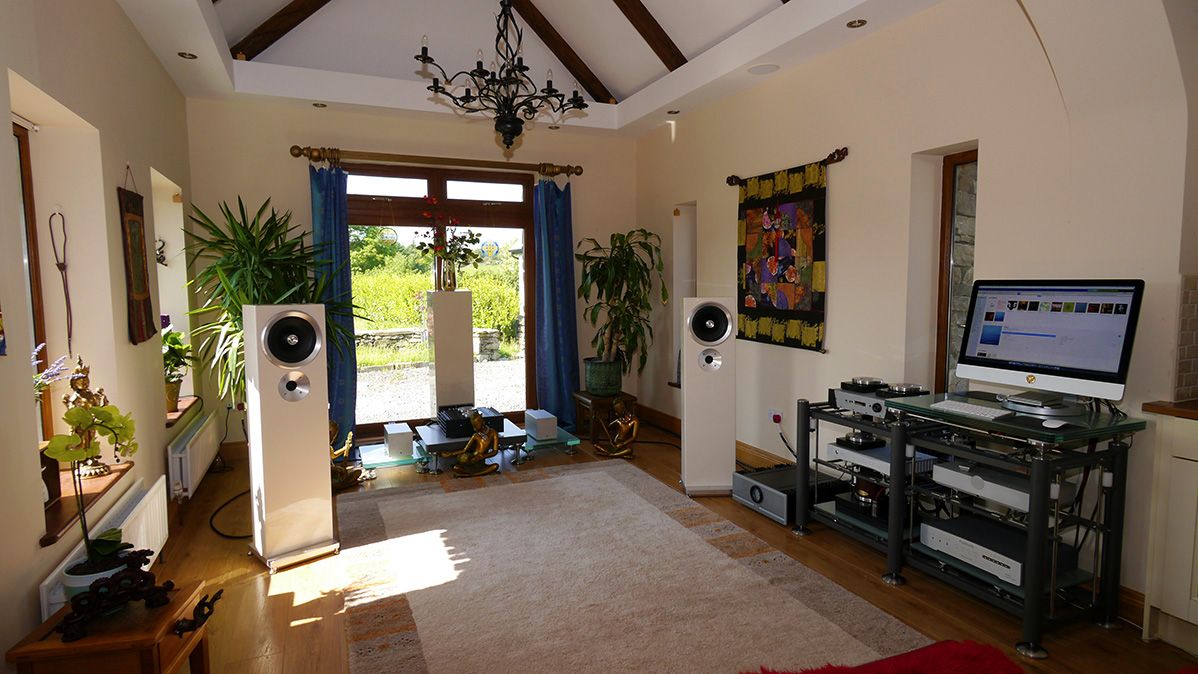 Our ~98dB/16Ω Druid VI would barely tickle the SIT-3. It'd remain squarely within its 2nd-order profile. Coming off a lengthy stretch with our 200-watt LinnenberG Liszt monos whose fully balanced 1MHz circuitry plays it as low 3rd-order dominant—something I've developed a taste for with our Audio Physic speakers—my first SIT-3/Druid encounter was short. It merely confirmed expectations of organic sweetness and leisurely ease plus being wildly copasetic on gain. I'd revisit the Druid to contrast SIT-3 to SIT-1. But to play to personal preferences whilst looking at other readers who've been mis programmed by power propaganda, I needed a different load. I wanted something that'd ask just a bit more of the FirstWatt; and which would interact differently with its THD profile. Enter Albedo Audio's compact Aptica usually holding court upstairs. It's a 5.5" Accuton-fitted 2-way with very effective transmission line augmented by two internal Helmholz resonators. Those cancel out primary organ-pipe resonances. Of the same sensitivity as JD's Dynaudio and with our normal SPL, they'd fall well within the SIT-3's can-do zone. Never mind the cubic-inch brokers. They categorically want to sell you on big heavy amps for wanker watts, not look at what you actually consume. 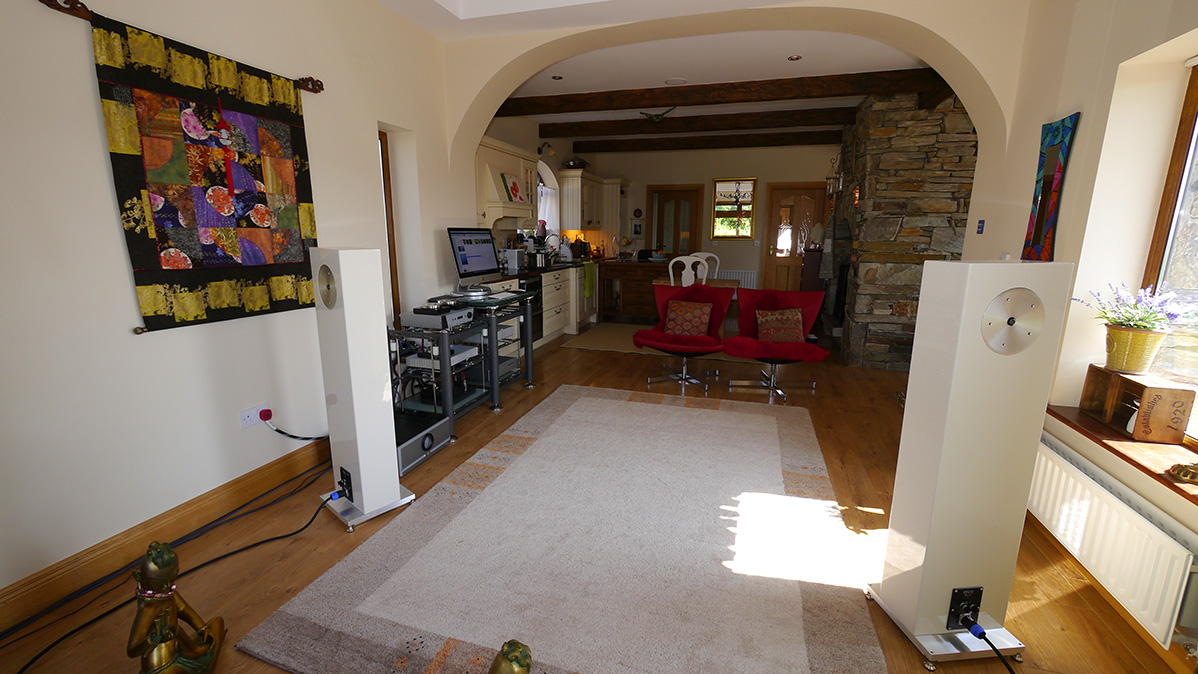 For hard facts in casa Westport, I ran the Fore Audio DAISy1 DAC balanced into the Wyred4Sound STP-SE2 preamp. This meant a max 4.6Vrms from the source whilst the linestage operated below 64 on the dial to add zero voltage gain of its own. That only kicks in at 64 to boost the source up to 80. So Miss Daisy could have driven the SIT-3 by herself and still be louder than I wanted. The preamp really only performed signal routing and buffered attenuation. That was true despite our open floor plan which has speakers fire down a 14-metre stretch for ca. 100m² including the adjoining living room on the other side of the freestanding fire place; if the door to the big two-storey entry hall aka my office is closed. Otherwise there's a lot more cubic air volume still. Either way, into this 4Ω load, the 30 watts of the SIT-3 were plenty wakoo if not up the wazoo.*

* To see how much gas your system guzzles, install a basic SPL meter app on your smartphone. If you find yourself listening to below 80dB, you never exceed 1 watt of power despite distance losses. If your peaks hit 90 and your speakers are rated at a low 85dB, you're 5dB over what 1 watt delivers at 1 meter. Now you may need 5-10 watts (a doubling of power for every 3dB) depending on how far away you sit. In short, for most people and speakers, 25 watts into 8Ω tend to be beaucoup. If you mean to get by on a lot less, either your speaker sensitivity has to go up or your listening levels down. This isn't rocket science. If you hear people argue about necessary headroom for musical realism, a software player like PureMusic includes a peak meter. Turning that on, you'll notice that most popular music has a dynamic range of less than 10dB. To get to a window of 20dB to 30dB between quietest and loudest passages tends to require symphonic music. In a front-row balcony seat during Bizet's 'Carmen', I measured peaks never exceeding 90dB. Ditto for a 12th row center seat in Montreux's Strawinsky Hall during 'Sacre'. You can listen a lot louder at home. Just don't call it realistic or life-like (unless you sit front row during a symphony or attend irresponsibly deafening stadium Rock).

Time aligned via a sloping baffle and minimum-phase 1st-order hi/lo pass, Aptica's hard diaphragms retain a tendency to focus on leading edges not bloom, on speed not body. Just so, at the time of purchase, these were my favourite ceramic-driver speakers. They became our resident very civilized ambassadors for this breed. Clever TL loading mines bass into the mid thirties if an amp makes it so. 'Swiss school' amplifiers from Audiozen, Bakoon, Crayon, Goldmund and LinnenberG will add up to very high lucidity and crystallization with precision sorting and deep detail. That naturally treads lighter on the counterpoints of mass, profundity and relaxation. Not the SIT-3. It shifted the combined emphasis notably deeper into colour saturation, sweetness and image heft. In terms of perceived temporal progression or gait, the focus was legato not staccato. Think easy and relaxed, not pushy and driven. Because these speakers represent more of the opposing polarity, the combo covered all the bases. Where the hard-hung 10.3" widebander of the Zu display noticeably more dynamics and feistiness on the high-power LinnenberGs to feel too genteel over the SIT-3, the Albedo 2-ways balanced out perfectly. The last bit of LF grunt and control left under the table compared to the Liszt bricks was more than made up for by how the drivers' core ceramic signature demetalized. The crisp bright edgy undertones had gone. The sound now behaved more generous like cellulose ScanSpeak or Audio Technology.

This meant less dissective separation and more connective tissue. Using plain language, there was less blank space between the notes. Instead of feeling teased apart like disconnected entities, stuff hung together like family. It it were rain, you'd simply get wet, not count the drops. This created an immersive not aloof presentation. Just so the soundstage developed well behind the speakers set back out through the French doors as it usually does. On close-mic'd percussive metal strikes, the inverted tweeters didn't sizzle or spit. Hot Cuban brasses like on Diego El Cigala's Indestructible didn't wilt my ears even at mariachi levels. The benefits of low-level octave doubling which results from a deliberate 2nd-order triode character were in full effect. Yet they didn't get excessive like they can when actual triodes leave their comfort zone. This was all about a master chef's proper seasoning, then not ruining it by piling on more with an ill-considered speaker choice. Now we have a generalized notion of where the SIT-3 lives. To get specific, the FirstWatt models F5 and F7 would have to play context by contrast next.