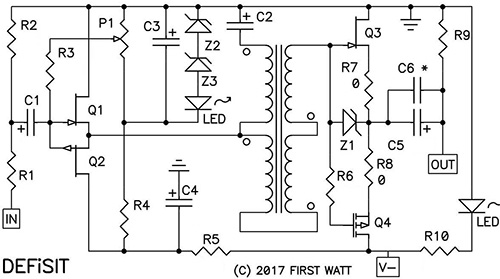 "The nice thing about this particular circuit is that it accommodates all the remaining SIT devices including the Sony parts; and you just reverse the polarities for p- versus n-channel SITs." The latter instruction at DIYers reflects the fact that Nelson's parts never came in '+'/'-' variants. As to what circuit the original SIT-3 lost out to during those marathon listening sessions, "the DEFiSIT. I did not favour it simply because it is difficult to obtain matches for the complementary devices, costing more and limiting the percentage of SIT parts that could be used. However, the DEFiSIT sounded better and a version of it is now the SIT-3."

Given how FirstWatt is now a Pass Labs brand, what exact version remains protected IP though the usual cadre of 'greedy boyz' on the Pass forum will inspect our obligatory inside shots for more hints, communal guesswork and sundry simulations. Turnkey buyers don't bend to such acrobatics. They entrust them to the original designer. Beyond price/power basics (can I afford it?; will it play nice with my speakers?), their interest is sound. For them it's enough to know of a push/pull output where a depletion-mode n-channel SIT mates to an enhancement-mode p-channel Mosfet in a self-biasing class A power follower with "reduced or eliminated degeneration and high thermal stability. The 200kΩ input is a push/pull Jfet buffer driving an autoformer for 11dB passive voltage gain. Besides the unusual output stage, you might notice the inverted power supply which dramatically reduces supply noise seen by the SIT. This requires careful selection of each SIT's gate voltage which must be carefully matched to the Mosfet but fortunately this SIT part falls into the range where such matching is possible."* 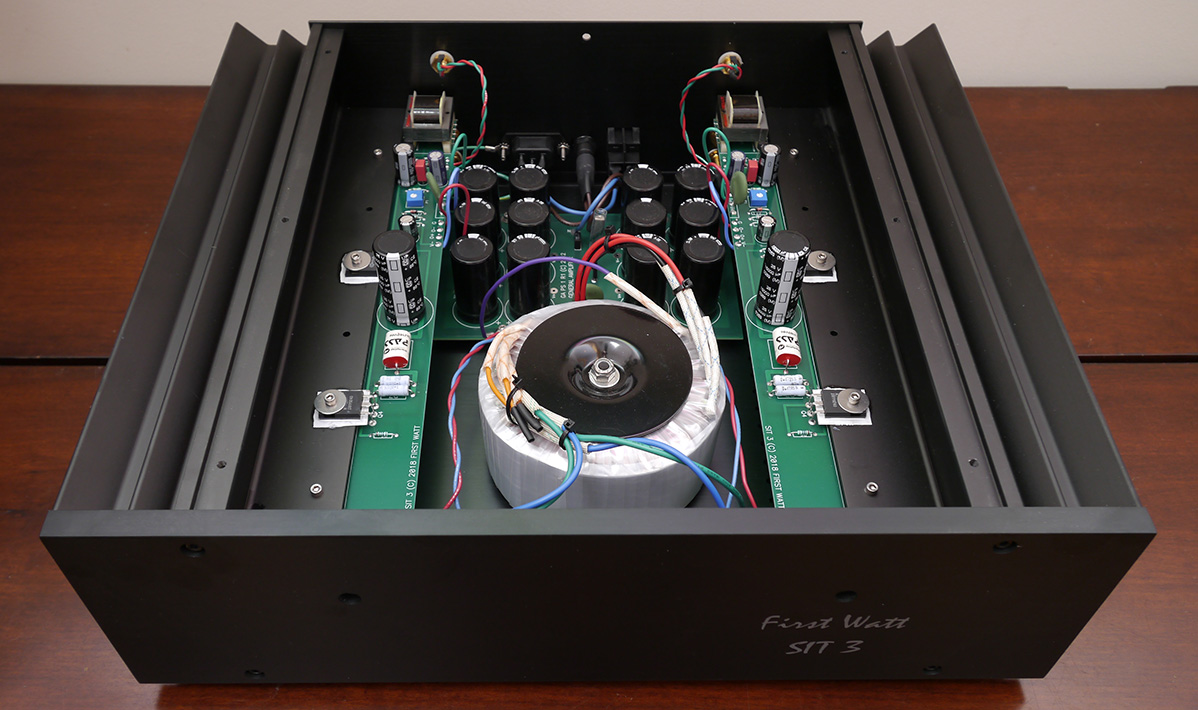 * "The big problem is finding a part whose enhancement mode gate voltage is matched to the opposite gate voltage of the depletion mode part at the desired current, temperature and supply voltage. Some of the SIT-1 transistors can be matched against some of the p-channel Mosfets of several different part numbers. For consistency, each pair of channels uses the same devices. After that, you have to consider whether to apply degeneration to the Mosfets to get a consistent transconductance for the pair. It takes a large population of parts and a lot of time."

And then there are Nelson's measurements. The first shows a slightly soft treble likely caused by the stepup magnetics; the second a minor distortion rise in the bottom and top octaves; and the last SET-typical distortion behaviour into higher power though many triode amps will actually exhibit far higher distortion values. Still, the SIT would again emulate certain triode traits even though actual voltage gain this time fell to the passive domain via an autoformer. "The SIT-3 has more power, more damping factor and less distortion than the previous SIT designs. It retains their desired 2nd-harmonic character with even fewer higher-order harmonic components." As forum poster Soundhappy shared, Nelson's talk at last year's Burning Amp Festival includes more tidbits on the DEFiSIT circuit starting at 1:08:00 into the presentation.

We might contemplate that the means whereby other amps pursue far more power and ever lower distortion could be sonically less advantageous than FirstWatt's credo of minimalism and simplicity, be that avoidance of negative feedback, elimination of degeneration or biasing up an output transistor with a single part where others might need far more. It's this very subject—why experienced listeners often prefer seemingly inferior-measuring amplifiers—which much disturbed the late Eduardo de Lima of Audiopax. He was convinced that it had to signify something far deeper than just the surface 'more distortion sounds better to them' claim and went on to develop his own theories around it. Luca Chiomenti of Riviera Audio Labs too developed them. If you revisit my review of his AIC10 integrated, you'll see them spelled out. It makes for interesting reading because so much of it correlates with FirstWatt. As Nelson put it about the SIT-3, "while a lot of people love them, the SIT-1 and SIT-2 have the kind of distortion figures (deliberately) that the 'Measurements-are-God’ folks would shake their heads at. The SIT-3 has 1/5th the distortion to represent a bit of a departure from the SIT-1 and SIT-2. You could say that the design has moved closer to the mainstream in amplifier offerings in almost every respect, including a lower price tag. This doesn't say very much about the subjective sonic performance but this circuit beat several other contenders (all of them a lot easier to make) in extensive listening. The SIT-3 has an organic quality that breathes more depth and life into the music, stopping short of cartoon. This is one of those all-night, year-after-year pieces." For hard specs, there's 18/30wpc into 8/4Ω max power, a damping factor of 30 and bandwidth of 10Hz-50kHz -3dB.