Sonorama County. To take that tour, the Silver Fox displaced Kinki's head amp, incidentally another Exicon lateral Mosfet design. So are my Kinki EX-B7 250-watt mono amps. The preceding signal path here dispatched purely local files on my music iMac through Audirvana into a Singxer SU-6 USB bridge/reclocker. That forwarded digits via AES/EBU to a Sonnet Pasithea R2R DAC which forwarded now analog signal via Furutech NCF XLR. The DAC's variable reference voltage became my fine volume adjustment from the seat since the Cen.Grand lacks a remote yet my HifiMan Susvara hang off a 3-meter XLR4 leash to put me a good distance away. Now I simply turn the iMac to face the seat rather than go after a photo op turned 90° on its lazy Susan. 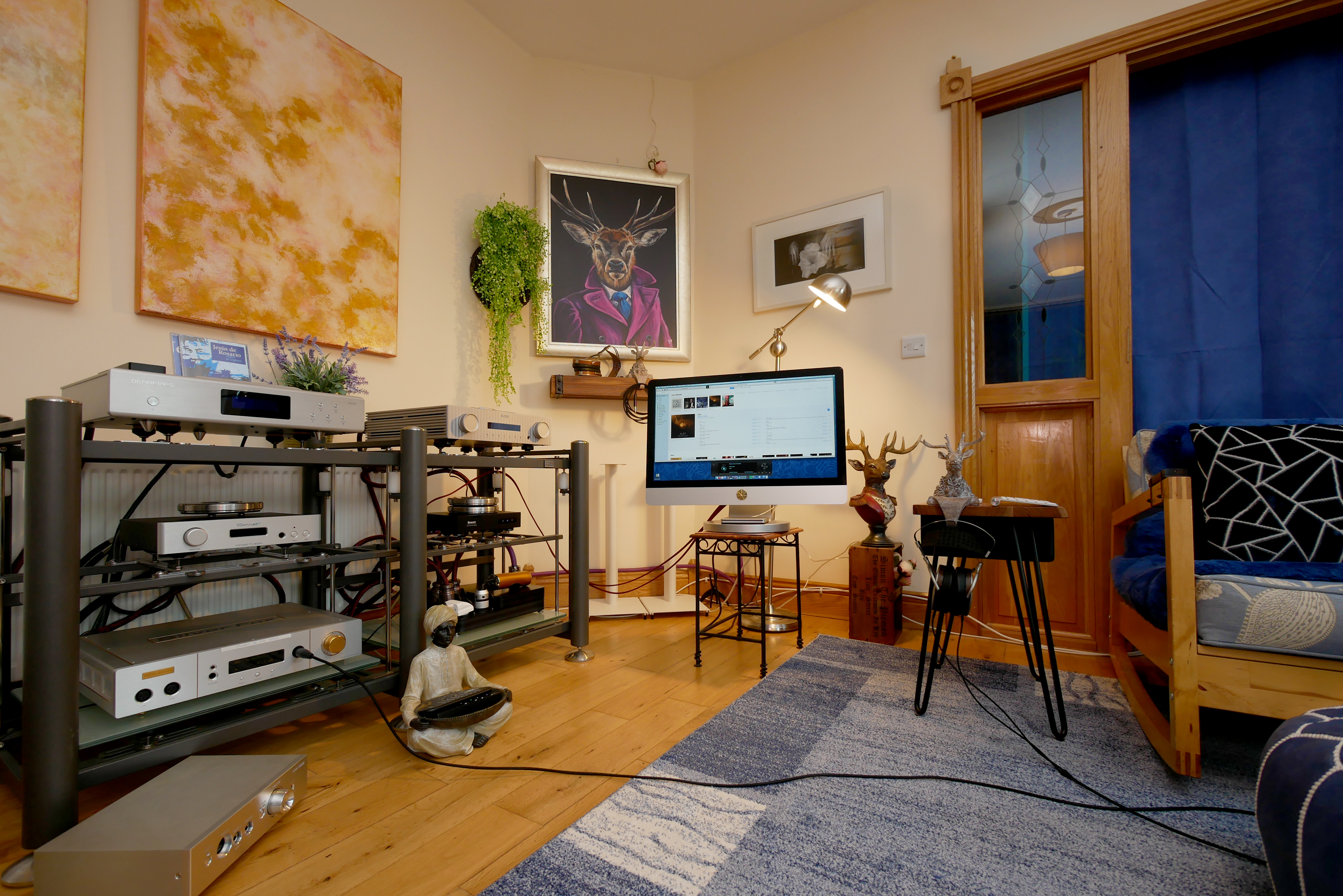 To get competitive, in moved the Enleum. The Sonnet Pasithea fed that RCA, the Silver Fox XLR. Swapping headfi leash to 6.3mm accommodated the AMP-23. Matching levels between amps with their own attenuators, the DAC's master volume then controlled playback SPL from track to track. ABBA lived; not that it took many swaps. The upshot was plain, the playing field perfectly level, the meet one of equals. The only difference of note was tonality. Enleum's top end was turned up more. It polished proceedings with higher gloss, sparkle and air. Silver Fox's center of gravity was a bit lower, its textures were slightly less moist. What by contrast was a very minor injection of warmth was dry not humid. Whilst Mr. Deng's circuit appears rather more complex than Mr. Chae's—and has ~10dB more voltage gain—his amp behaved as nimble, graceful and gentle as the more minimalist amp. Despite being groomed for what in headfi is high power, it could do ethereal, wispy and weepy without muscle-bound brutishness. If behind it hide many cascaded gain stages and negative feedback, you'd not really tell with Enleum's simpler circuit as guide. Naturally Silver Fox could slam and mine the Mariana bass trench as you'd expect from its brief. To me the greater achievement was its simultaneous ability to do soft and emo when material demanded it. That was quite chameleonic. 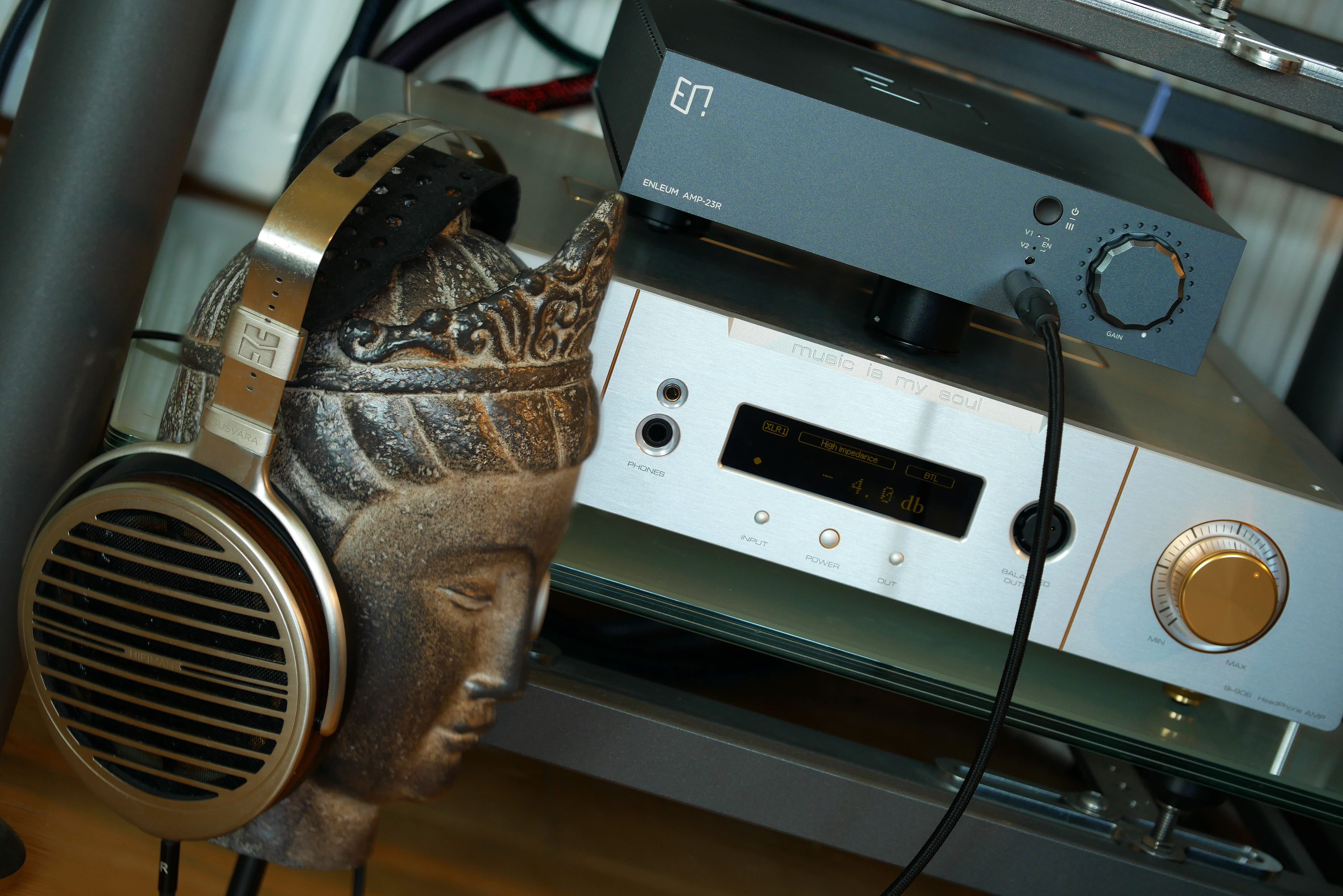 Having established its general position on my personal map of headfi amps where until now the Bakoon AMP-13R then Enleum AMP-23R had reigned supreme, Silver Fox migrated to my desktop for easier photo ops with different loads.

Be it the high-efficiency dynamic Final Sonorous X, the sealed planarmagnetic Audeze LCD-XC or Final's competing D-8000 planars, common denominator was color radiance as an actively projecting quality that didn't just sit there pretty. Even blindfolded and struck by total amnesia to forget all before, I'd have known that I was listening to a super potent amp. How so? With speakers, it's not the gift of gab but projection force that's key to bridge free-space distance. If we want an emotional lap dance whilst the sonic action remains cast apparently through our front wall into whatever lies beyond, we need a bridging quality. Otherwise sounds hover in a faraway somewhat listless state. Everything happens 'over yonder' to render us observer not participant. I liken the antidote to an ace university lecturer who maintains a charismatic connection not just with his nerdy teacher's pets in the front row but the real slackers in the far back. With headphones, bridging physical distance is no issue. The transducers operate within centimeters of our ears already. Still, with Silver Fox the orator's emotionally connective activity was unusually active. Call it turned-on magnetism. Putting out. Hence Silver Fox's saturated colors and image density didn't play semi-lethargic lardies but gifted muscular athletes with real cardio. 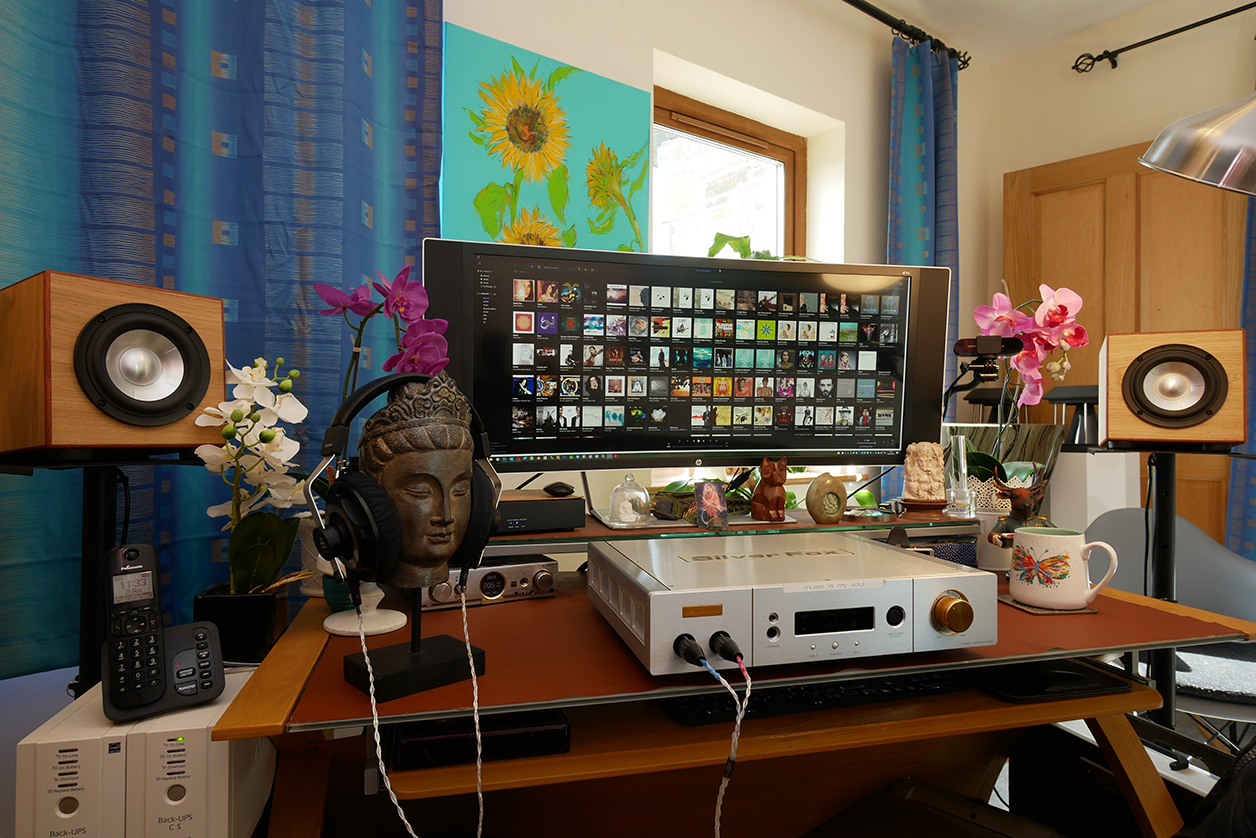 It's no exaggeration to say that this attitude transformed all passive listening into more active engagement. If one chases the volume off into the shadow realms, one can obviously ghost this. But even then the difference factors, just weakened. At normal to higher SPL meanwhile, it kicked in with a pitbull's lockjaw. 'The force really is with this one' would be Yoda's assessment. None of it used audiophile-approved terms. Just so, it points at the heart of the matter I heard with all my loads. As such it's the essence of my findings and what I consider to be the key attraction of Mr. Deng's Silver Fox. Whilst demonstrably grippy on Susvara, its power harnessed no showy stunts but first and foremost caused this erasure of emotional distance. To satisfy standard hifi linguists, I'll next—try to—explain just how it did that using normal audio vocabulary.