A small band of wide brothers: Camerton & sound|kaos. This pitted €5'564/pr plus €356/pr for matching stands against €11'950/pr without. It also contrasted Swiss solid-wood construction against a German Plywood build and—probably the dominant decider—four drivers against one. Replacing the Wyred/LinnenberG separates was the Bakoon AMP-13 with variable amplification factor. It's in this final match that Einstein's dictum of 'everything should be made as simple as possible but no simpler' came for revenge. On the very score where the Berlin challengers had cleaned house on our two-way residents, now the Swiss reset the game. Their upfiring Raal ribbon showed more finesse, more sheen and whisper-fine tracking of cymbal stick work, more of the hoarse attributes of a worn voice plus airiness in general. The still smaller Tangband widebander sounded yet quicker and more hardwired to musical energy, more deep-throated down to the vocal cords. This built even bigger more powerful in-room presences. Finally, Martin Gateley's horizontally opposed woofers commissioned from Armin Galm of Enviée fame moved more air with more grip. 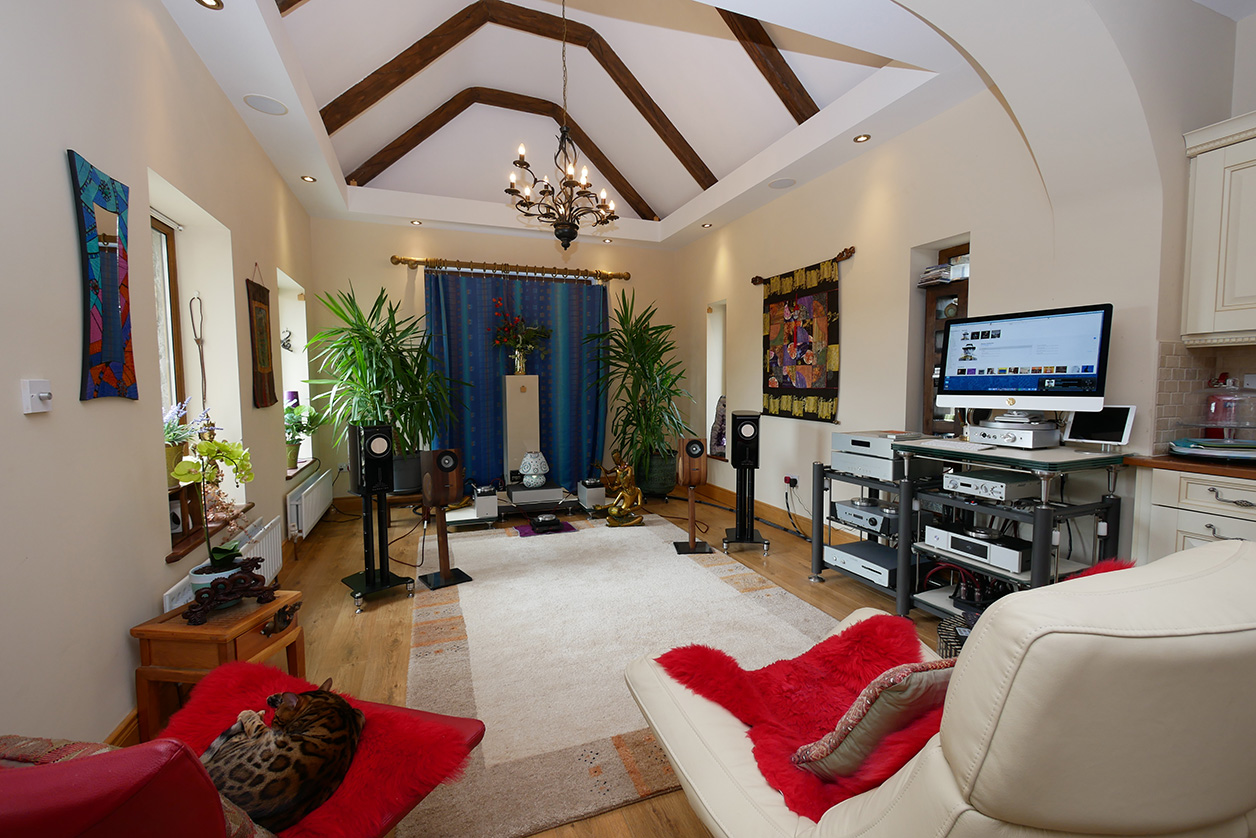 Battle for the sweet spot – won.

Whilst for the Vox 3 model, the Swiss designer defied the purist widebander credo by augmenting his central driver with dedicated woofers, a super tweeter and filter parts, he remained on Einstein's safe side of 'no simpler'. For this particular match, Oleh Lizohub crossed it. Sacrificing ultimate simplicity to push performance gave sound|kaos the edge. Of course if a flawless piano-gloss black lacquer is part of your search, the wooden look of the Swiss won't do. And if you needed to sample before considering any such purchase, the direct sales of sound|kaos with just a few dealers on reduced margins probably won't afford the same opportunities as Camerton.

These small point-source widebanders possess a very special sonic appeal which, once properly exposed to, could or at least should convert a number of folks who currently live in the multiverse of many drivers to set up shop in the universe of single drivers. It's a matter of personal priorities and what particular must-have qualities dominate. With Camerton's Binom-1, a direct-heated triode diet is no prerequisite. To make that point, Oleh premiered his Binom-1 with 50-watt class A transistors in Munich. I used from 30 solid-state watts in class A to 200 watts in class A/B. Nor must one stick to a diet of shy girls singing to solo guitars. Here too Oleh's own show music of big drums and symphonica made sure to stress the point. 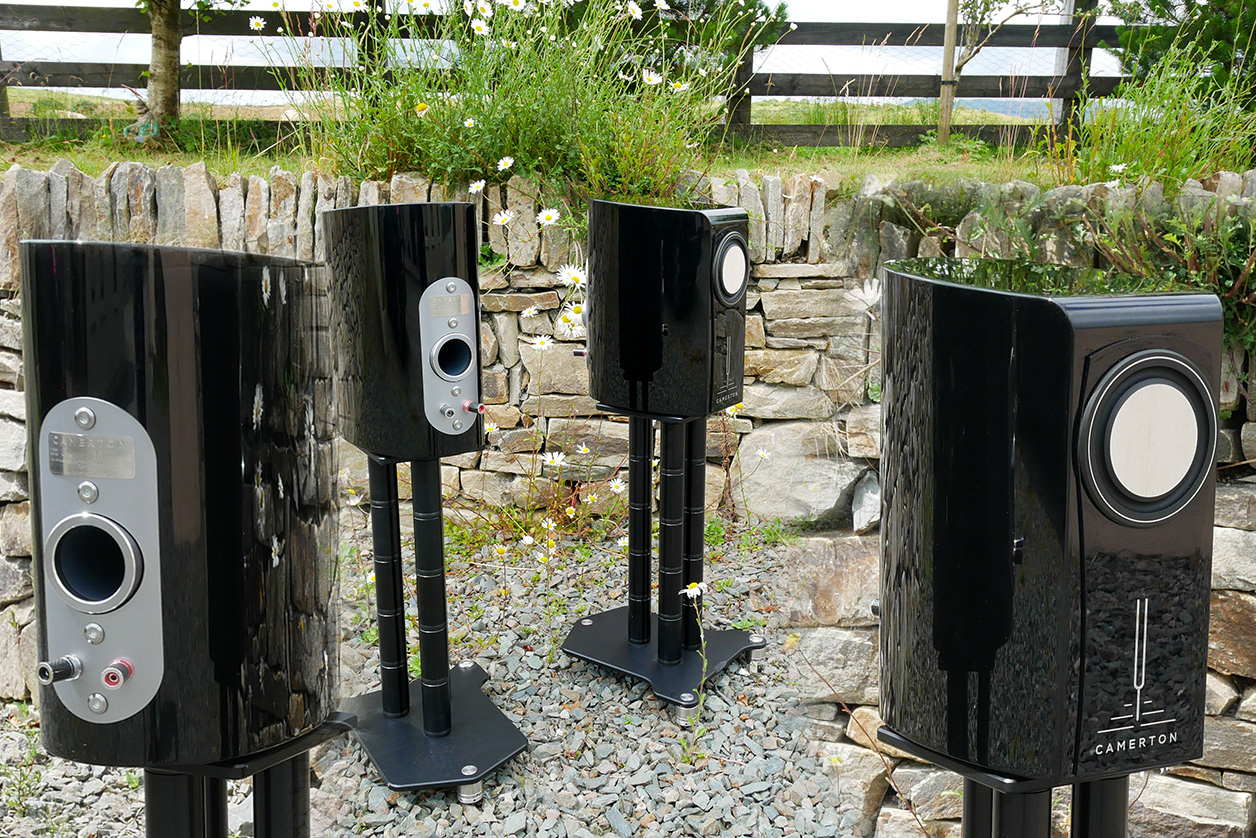 Still, it's hard to predict just how many people will be open-minded enough to even seek out a Binom-1 audition. This speaker flies in the face of serious preconceptions and beliefs, about what's required and best for the job. Owning 4-way Audio Physic Codex for very equivalent coin, I can tell you that if needle-in-the-arm directness tops your shopping list, the Camerton has them clearly beat. If it's about staying unfazed during massive mayhem; about ultimate loudness and bass power… of course the tables turn. The question is, how much mayhem and highly elevated SPL do you really do once dealer or hifi show doors are closed and you back in your own digs? Shoppers hip to the catalogues of Cube Audio and Voxativ know that for compact size across such bandwidth without DSP, neither firm currently has anything comparable. Only the sound|kaos Vox 3 is smaller still but equivalent on bass reach. That makes Oleh Lizohub's Camerton Binom-1 a highly reflective member of a most exclusive club. Entry requires no secret handshake though, just a call to Berlin. But be warned. This is a serious mind bender. It will have you question what you thought you knew about speaker design; and your audiophile credibility much impugned should you fall for this one-eyed wonder.

Reader Gert Schultz: "The key difference of the Camerton seems to be its port loading when the majority of such speakers use big rear horns, quarter-wave boxes and such. From your descriptions, the Binom-1 works very well with a port to manage what other types need much larger enclosures to do. Why are ported widebanders so rare?" That was an excellent question which Oleh might answer. Does it require particular driver optimization to come off? If so, what makes one wideband driver very happy to be ported and another less so or outright antagonistic?