A white elephant. Speaker pricing like a fancy new car can be that elephant in the room. I rarely pursue today's €50K+ sector. The appeal of yet another big very heavy box with cones and domes eludes me. For such coin, I'd want something more sophisticated and modern like Node Audio's Hylixa; or today's Courante 2.0. In my head space, that turns our elephant a rare snow white. It remains big wallet game but offers something truly unique that's based on real engineering to push the performance not bling envelope. Now I see reporting on such white elephants as rewarding innovation with deserved coverage, not perpetuating the involvement of the press in the high-end's ongoing inflationary tactics. That's all I have on the sticker shock of this assignment. It's a rare walk on the wild side for us to remain conversant about what might represent the current state of the loudspeaker art. 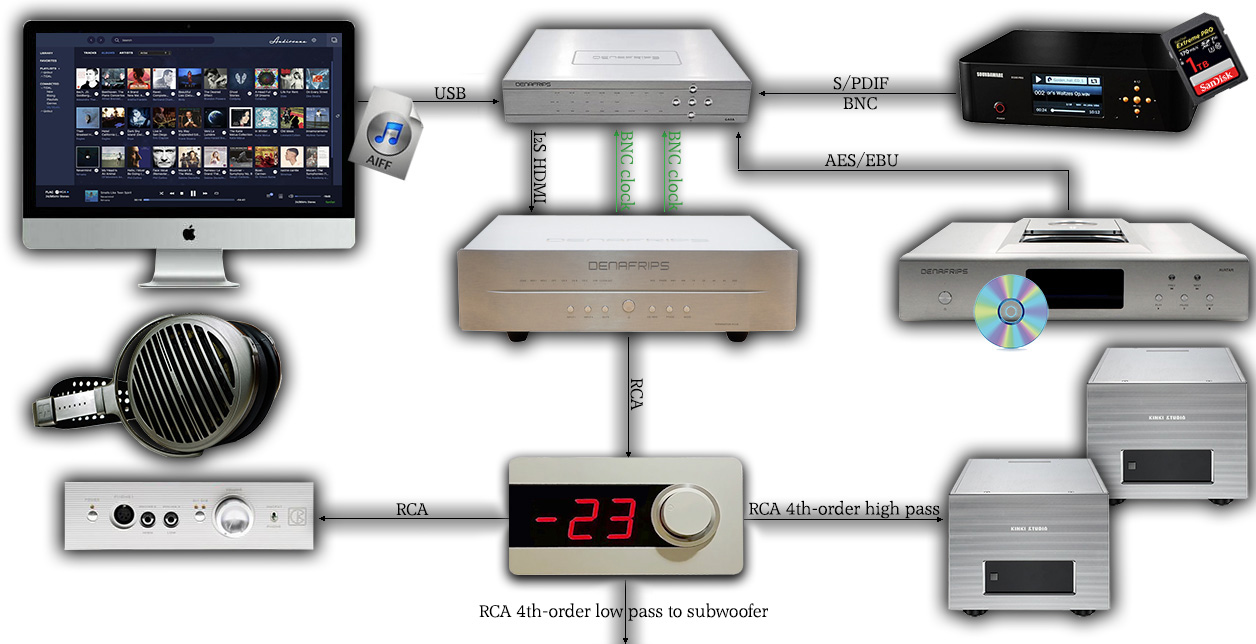 What to feed elephants of any color? Does one need elephantine ancillaries? It's a fair question. It's the probably prime reason why most reviews of high-priced components/speakers go to reviewers who own mates priced to match. Today that logic would have left me out in the cold but Zoltán must have thought our above hardware suitable. Add AC/DC filtering by Vibex, a cable loom by Allnic, resonance control by Artesanía, cable dressing by Furutech and acoustic resonators by Franck Tchang for the full picture. Before we hit 'play', a few words on the HF of omni speakers from Avantages and German Physik I'm familiar with. All speakers radiate into full space somewhere below 300Hz. It's where the room takes over to involve all of its reflective surfaces. As frequencies ascend, their dispersion narrows until most tweeters turn into virtual spot lights. Full omnis expand how every woofer radiates all the way to the very highest frequencies. That distributes far more midrange and treble energies which like the bass now reflect off all boundaries.

That could predict a bright treble. In my experience, the exact opposite is true. With standard dome tweeters hitting reflector lenses, whatever their extra in-room energy might be is drowned or masked by midband energies now everywhere. Hello rolled-off top. That's true also for the inverted-funnel widebanders of our German Physik HRS-120. A personal exception to this had been mbl omnis whose tweeters aren't conventional by any stretch. Their show demos struck me as quite bright. Without having lived with an mbl, I can't say whether that impression came from a rising response or unusual HF dynamics. In any event, what I didn't expect from Zoltán's tweeter was a relative loss of HF energy in the seat. Would that expectation hold?

How can unusual treble dynamics feel bright? A rising frequency response means a relative increase of loudness. Likewise for dynamics. It means more loudness just during short-term peaks. Things get momentarily louder than we're used to; and in more linear fashion to not compress at the frequency extremes. Typical 1" dome tweeters sans horns are dynamic minions compared to far bossier long-throw midranges. But replace a dome with an AMT of far larger surface (at right Arya Audio Labs' 180° Airblade with 38 times the surface of a 1" tweeter).

An AMT's operational principle adds a 5:1 velocity advantage. Whilst it might measure flat in the frequency domain, when arriving from a ubiquitous dome tweeter, it could still seem dynamically forward and hot. Now we need an ear/brain reset to accept this new dynamic balance as the correct one and to hear the old tweeter for what it always was – dynamically stunted. That's what happened to me with the Raal-Requisite SR1a ribbon headphones. Mounted into open baffles which splay away from your ears like an AKG K-1000 of yore, their lightning-fast response without any energy storage felt very bright. Yet today they're my sonic ideals. With sufficient use, my ears simply reset. Now I can't go back. The new standard hears things very different. Now I look at (cough!) duplicating the ribbon's amazing speed, directness, dynamic freedom and refusal to delay and blur with our speaker setups. In the bass I already know that to require a RiPol sub to eliminate box effects and room interactions. There I'm looking for the sound|kaos Vox Sub D15 to drop. In the treble, might Zoltán's omni line source be my SR1a in-room replicator? Now you know what I knew, expected and hoped for before the Courante 2.0 touched down in County Mayo. Would I fall victim to gotcha or hear the full papery promise? For the purposes of review entertainment, either would do. To further the state of the art, there could only be one outcome.