1st date. Here are some of the albums from which a track each would factor on my initial playlist. We also see the WBT single-wire binding posts, the ports and the solid-wood rear baffle divided by the central metal sliver which seals off each carbon-fiber tube from the other. The subwoofer powers from a Vibex DC filter which kills its otherwise intermittent power-supply hum. I quickly realized that getting to know Courante 2.0 had to shift the conversation away from the sub. Otherwise this would only be a brief date. In this context the sub's bass textures were too boxy. They interfered with the seamless continuity of the treble's purity into the midrange. As soon as the subwoofer pulled out, its intrusion of mechanical otherness disappeared. Instantly the speaker's midband fell in line with its treble's distinct absence of boxiness. With a full-range Courante signal,  the conversation stopper once more were the bass textures. With the ports open, now the bass erred on the opposite side of too bloomy. So in went first one port plug, then both. Those improved the overripe LF textures and what for this room was overly ambitious bass output. 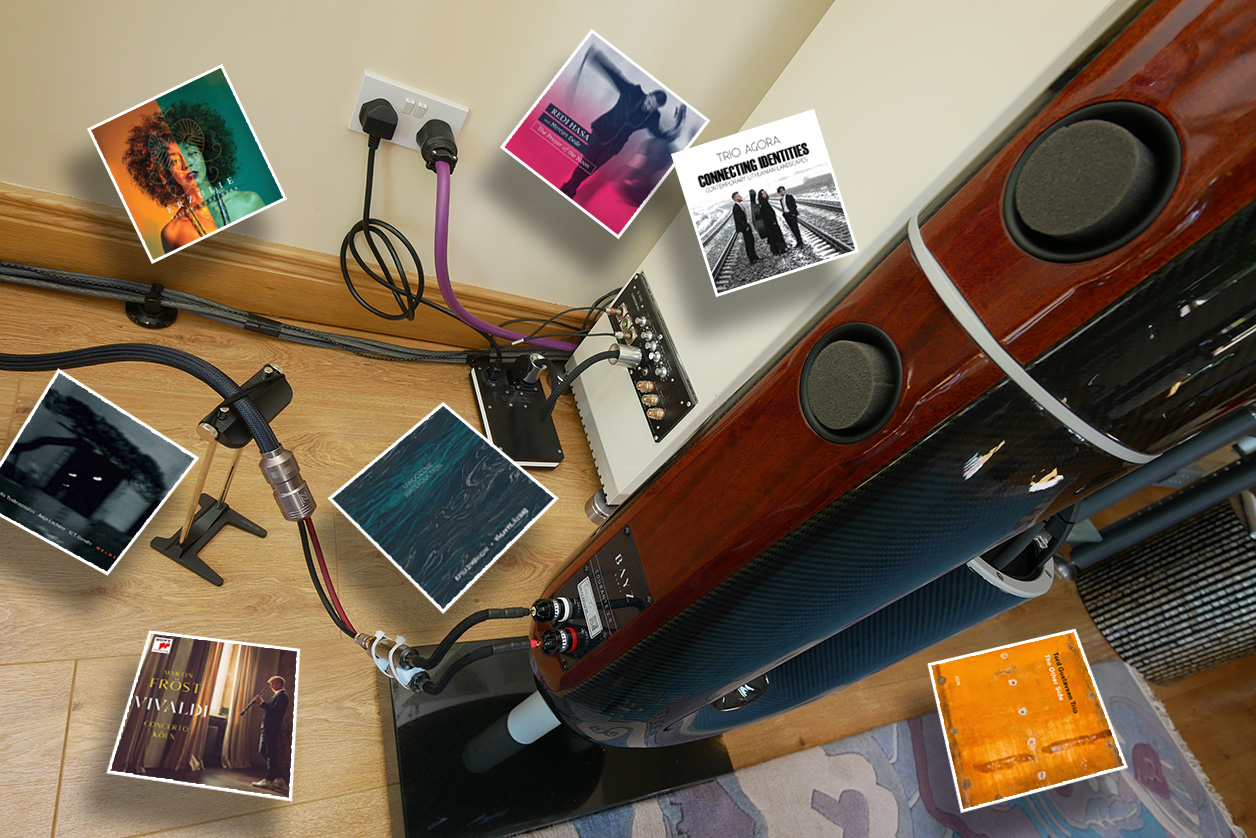 What I heard were ultra-precise yet very natural leading edges. Those embedded in an ambient field rather more active than with our direct radiators. Such reverb-enhanced backdrop constancy would take some getting used to. To visualize this synchronicity of usually exclusive qualities, image the music as a very fine self-illuminated line drawing executed on thin glass. Now overlay that glass onto a constantly changing background that's slightly out of focus. The background doesn't dilute the clarity and precision of the finely etched drawing. But it does create a higher difference delta between the exactitude and firmness of direct sound versus the fluffier delayed reflections. Relative to primary image focus, Zoltán's line-source tweeter prevented ambiguity; what omni detractors call vaguer imaging. Only with ultra-specific panned sounds like splattering marbles which usually race stage left to right then back did omni effects bunch up their usual journey. It's as though my marbles skipped a bit to first be left, then right, then left again without a full accounting of each intermediate position. Only very few tracks feature such trickery to make this a just cursory observation. By releasing far more midrange and treble energies into the room, dynamics across that very broad bandwidth were more loaded. Also, the the new balance of direct versus reflected sound caused richer tone exactly like a mastering engineer who applies faux reverb behind a thin voice to give it some acoustic assist. For a short list of first impressions, think transient precision of instantaneous very decisive let-go, treble/mid purity reminiscent of big ribbons or planars but with the tone and dynamics of large open baffles. Not just another box with the typical cones and domes; not that we expected one.

2nd date. Here 250-watt 3MHz Kinki Studio EX-B7 replaced 200-watt 1MHz LinnenberG Liszt monos. I had to ascertain which dovetailed better. On the debit ledger, the Kinkis' higher current bolted on more bass power just as it does for our resident speakers. Usually that's most welcome. Here it meant a halfway return to overly ambitious low registers. Those I could minimize with deliberate music choices; or the German amps. On the credit ledger, the sound gained speed and lucidity. That weakened my impulse to look for the church-effect kill switch. Church acoustics tend to exhibit very long decay times. Those cause an ultra-wet atmosphere in which trailing edges stack as standing clusters. Zoltán's omnipolar radiation pattern and my initial setup created a smaller equivalent which played up the impact our room acoustics usually have on the sound. Direct radiators weaken such a decay-enhanced atmosphere with ascending frequencies. Headphones eliminate the room entirely. The Bayz speakers deliberately maximize its influence on the sound. Obviously that's arbitrary and differs from room to room – and as we'll see, with setup within a given room. 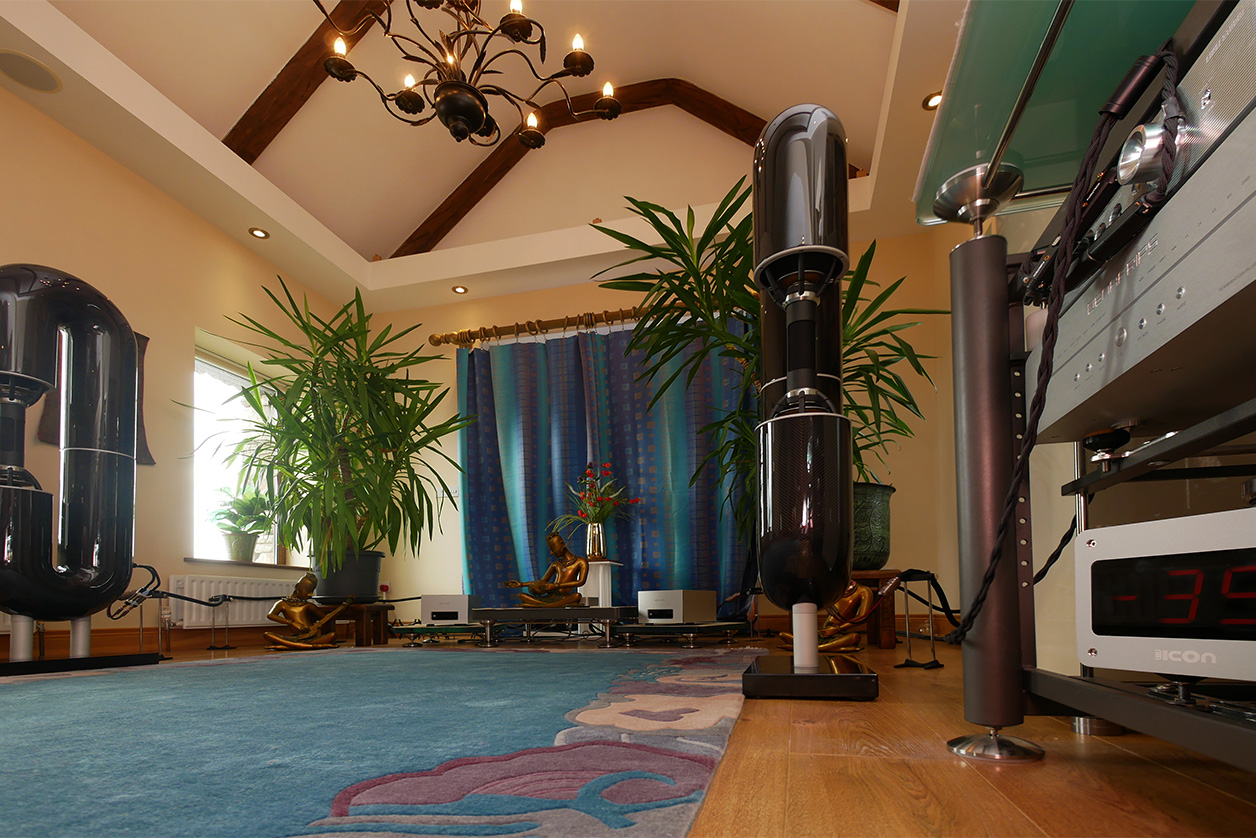 "As an amateur pianist and music lover, I've enjoyed hundreds of live concerts of jazz, classical, vocals etc. As a result, my objective was to build a playback system that most closely exemplifies a real performance and puts the listener in the same room as the musicians." Actually, it puts the musicians more fully into our room, not us into their room of original recording venue. To sense that—whether actual venue or spliced together and enhanced with synthetic reverb after the fact—demands that our own acoustics not overlay, alter or drown it. Now you appreciate my kill-switch itch. What the Courante 2.0 added with full-bandwidth reflections I couldn't turn off. It was an inextricable part of the presentation. I either got on with it or not. For me this was early days. Right then, the somewhat vague and billowy backdrop still disconcerted. It lifted the damper pedal on my sound and I wasn't used to it. "Give it time" the angel on my right shoulder advised. The devil on the left just raised his furry eyebrows while his pointy tail pressed between my ribs. That's because I had no room to move the palm trees out, get the speakers very close to the front wall and seriously shorten their first reflections. Still, I'd move them as far away from the listening chair as possible. Would that control the reverb effect to be less intrusive?