Trickle down, sideways and up. By October 3rd 2018, Soo-In took off the virtual lid. "We spent the last two years coming up with new ideas and worked really hard to create something wonderful. The AMP-13R is currently undergoing two patents and with our latest innovation and extensive studies on the Satri circuit, it will surely come as a surprise. Off to Denver tomorrow." So not AMP-31 but 13. I'd gone dyslexic. As Bakoon's website put it, "the technologies we recently developed were meant for our bigger amplifiers. To work in a compact amplifier with a small foot print, we had to achieve much higher efficiency. Our days of innovation weren't over. We ended up with a completely new technology that will eventually trickle up to our bigger amplifiers."

With fanciers of low-power amps to sample this innovation first, "with the introduction of the patent-pending JET bias circuit implemented first in our new AMP-13R, we've renamed our circuit JET SATRI. We consider our new bias circuit to be a revolution in audio amplifier design. The bias now perfectly stabilizes in mere milliseconds. The transistors reach their load line's 'sweet spot' instantaneously. That's why we call it 'jet': jet-exact thermal tracking. As the precise temperature sensor tracks changes in temperature to recalibrate bias in real time, amplification and sound are no longer influenced by temperature variations or warm-up. It might sound simple but required the most complex innovative thinking and engineering mastery in the analogue, digital and software domains. The JET bias circuit was born from a perfect harmony between ADC, DAC and microprocessor (MPU) with highly intelligent software. This circuit is now more efficient than ever. It has the lowest number of parts, shortest signal path and is our first to completely eliminate the output stage emitter resistors for lower impedance, hence a much faster direct response. It's so accurate that it no longer needs the separate current source circuit and this means much less heat, too. It is the perfection we've always dreamed of for Satri." 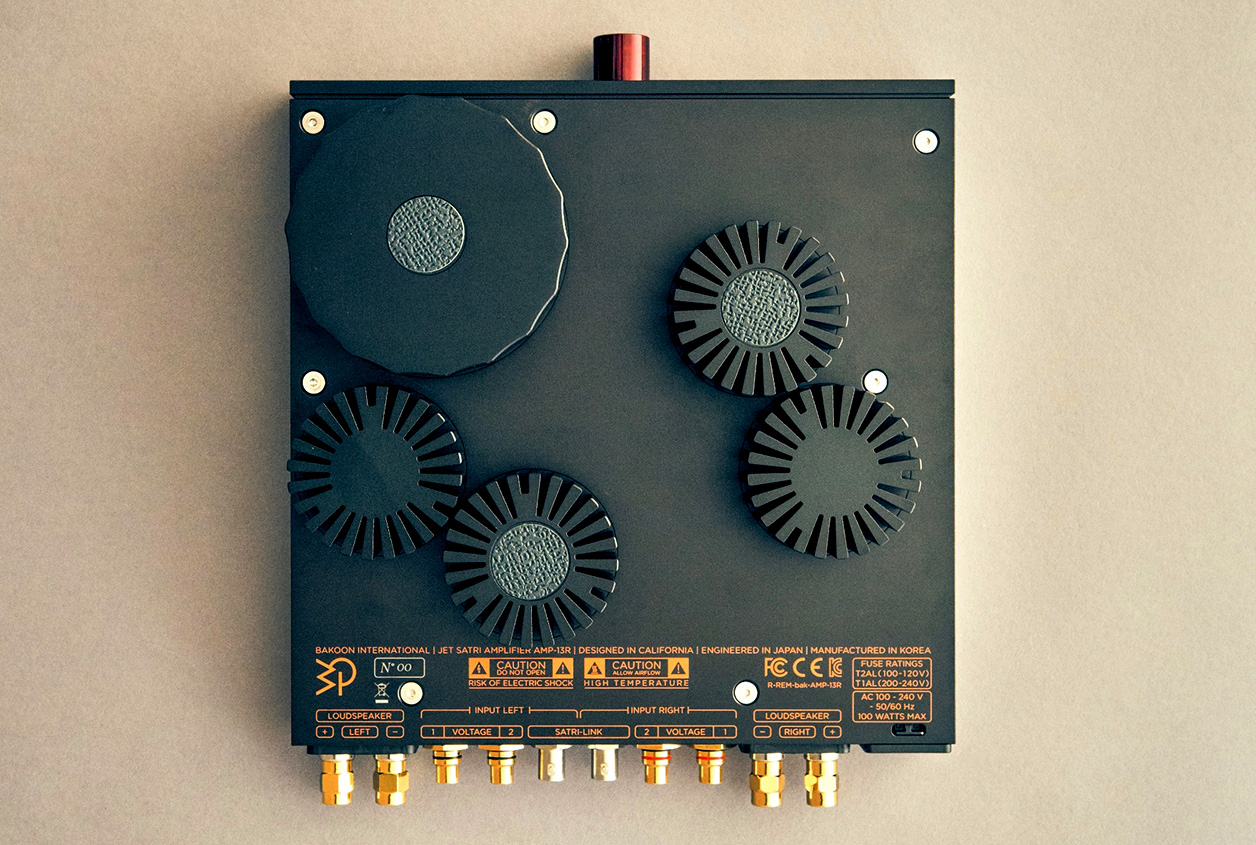 The AMP-13R delivers 25wpc/8Ω with 22.dB of max gain to the speakers or headphones (high), 7dB max for headphones (low)*. Bandwidth is 10Hz to 0.5MHz. True variable gain is set with an MCU-controlled 50-step attenuator. Inputs are 1 x 3.68Ω current-mode Satri on BNC and 2 x 10kΩ standard voltage-mode on RCA. Power consumption is 100 watts max. All of it fits into a 23cm² foot print of just 5.5cm height of which the front panel takes up only 2.7cm. Weight is a mere 4kg. At 25wpc, the AMP-13R's Exicon lateral Mosfets will drive any headphone ever made. The ultra-efficient power transformer is by Avel Lindberg of Connecticut and like the AMP-51R/41, the power supply features an auto-sensing voltage switcher for instant global happiness.
__________________________________

Readers wondering how the petite AMP13-R dissipates the heat developed by its class A/B output devices will rightly suspect that the biggest footer houses the transformer whilst the other four flowering types are 'thermal exchange nodes'. This unusual solution we first saw with the AMP-51R/41 precursors. It avoids typical lateral heat sinks and relocates their mandatory function to the belly mostly out of sight. It also places these high-mass pucks directly where most needed, lowers the mechanical construction's centre of gravity and doubles as resonance drains. Like the AMP-12R, this chassis is milled from solid aluminium. 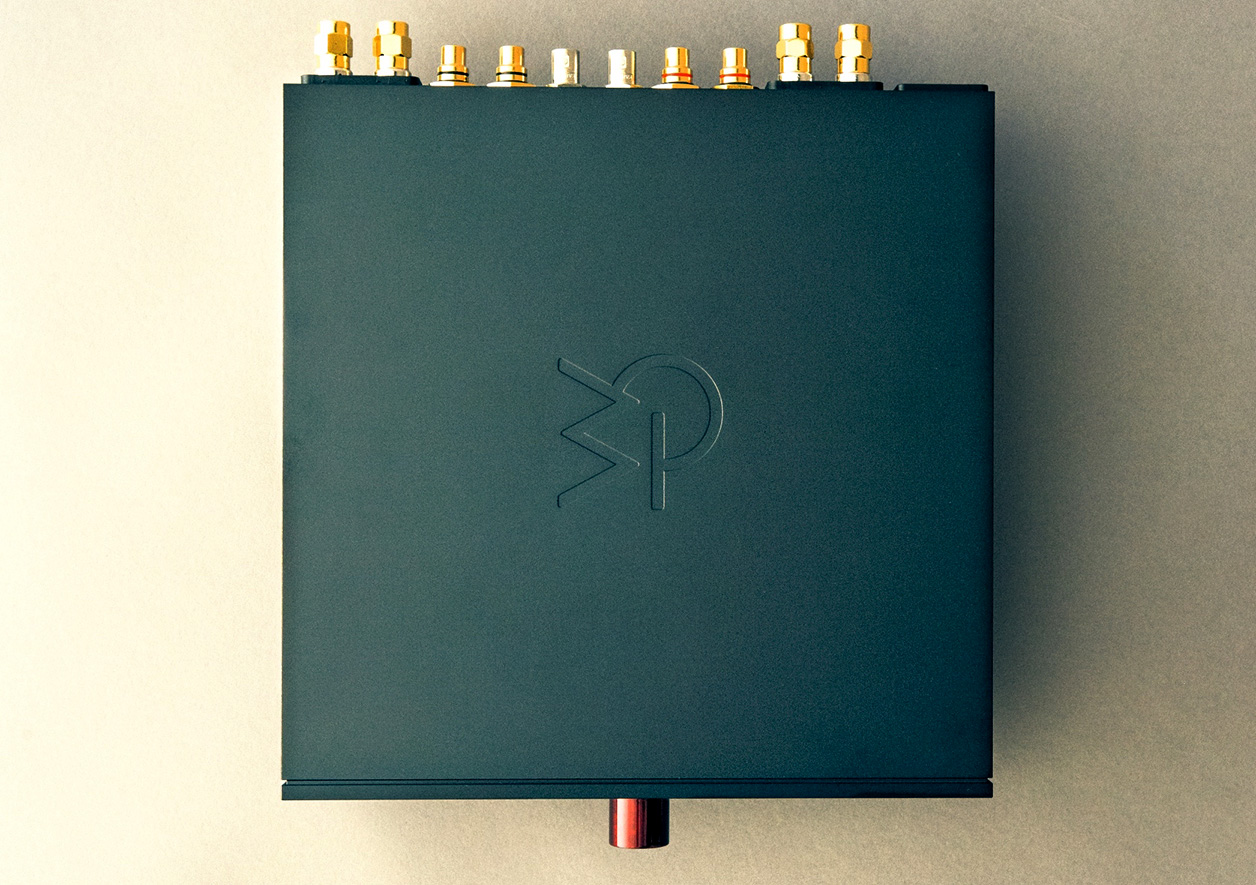 The remote-controlled gain display comes straight off the AMP-51R. The intermediate values of the lower 1-9 row show with dual LEDs, thus 6 displays as LEDs 5+7. 10 moves to the first LED of the upper row, then adds back the lower row and so forth. Like Zen, the entire AMP-13R project celebrates minimalism with a vengeance. And with a silent wink and nod, its bows to a well-educated smart audience whose choice of speakers doesn't rely on brute power. They know perfectly well that for their lot, 25 watts per channel are stacked. Kilowatt dreams are for the other guys.

In Denver, a freak transit mishap meant that instead of the small Vox 3, Bakoon's AMP-13R powered the 4-driver soundkaos Libération with their enormous 15-inch open-baffle woofers. Apparently flying at 30'000 feet high can cause a vacuum build-up in airtight packaging of plastic around a speaker which deformed the dust cap on a Vox 3. The mate survived because its plastic bag had a small tear. But the sample pair was benched and the baby Bakoon tasked to take on the big boys to reportedly fanfare. It's good to know how much or little power one actually consumes before falling for sales-floor hype and the necessity for mega wattage. In this exhibit, the visual disconnect ought to really have brought that message home. In fact, Dawid's syndicated soundkaos Libération review called out an AMP-13R loaner as his by far best amp for those big Swiss dipoles, beating a Kinki Studio EX-M1, FirstWatt F7 and Trilogy 925. "Stupidly good, the best machine of the sort I know" condensed it in a personal email. 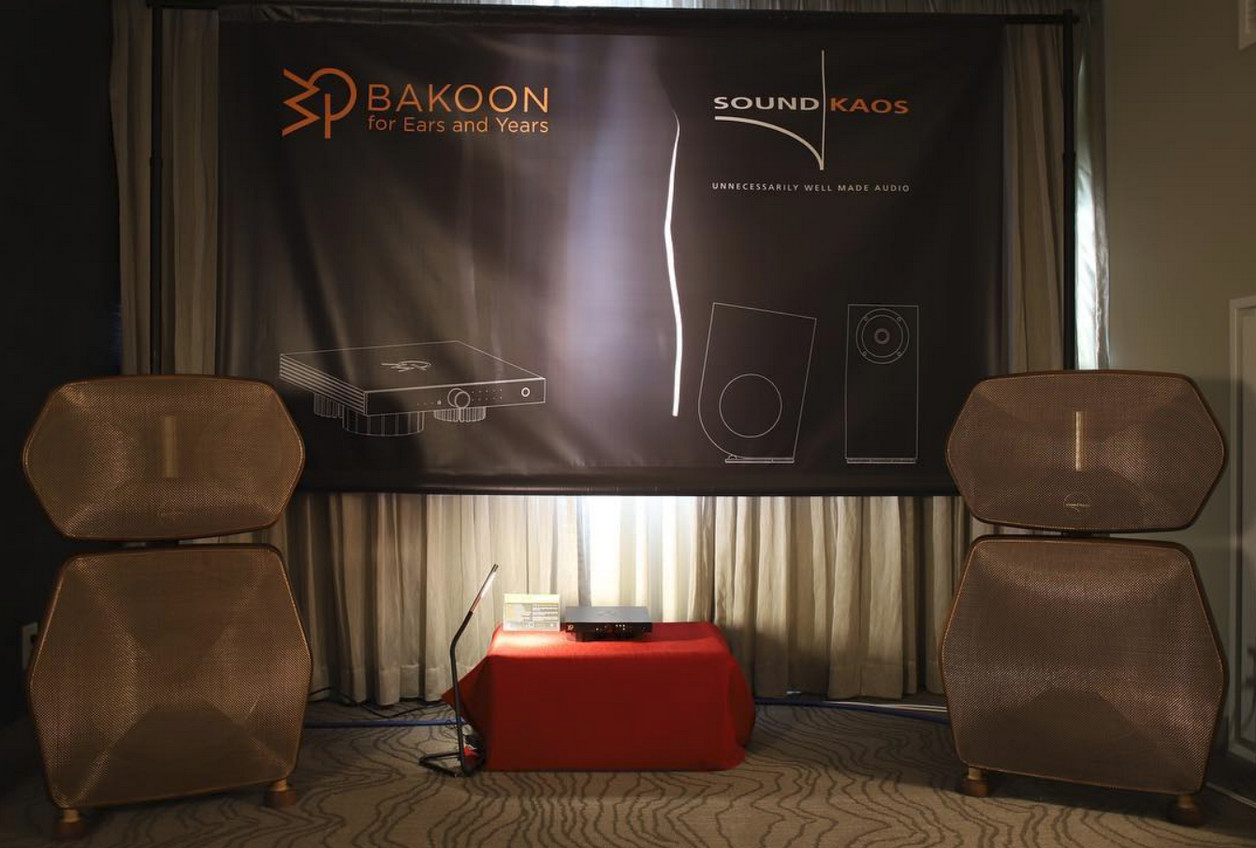 Or as Soo-In put it, "I loved the sound with the Libs and decided to take a pair for our home in San Jose. We actually thought the AMP-41 was too powerful for the small RMAF room. We felt that a lot of rooms (even those costing more than €100K) were playing too loud and I just couldn't stay there long. The good thing about this show for us was that we came with soundkaos and we were both mostly unknown in the U.S. Yet people still told us that our room was one of the best they've ever heard. We have now set the AMP-13R's MSRP at $5'800 which is slightly lower than the 12R was a few years ago. We tried our best to lower the price as much as possible despite the fact that the AMP-13R has many improvements and convenience features over the previous generation. I'm going back to Korea this weekend to manage production and hope that we can finish by early next month and send you a review unit right after. Martin is attending the Warsaw show with the 13R so we have to send him some units around the same time of your shipment. His will obviously be first priority."