… it struck me as ~90% Codex. "The ten missing percent went to the very bottom octave, how much of it was recovered by how much rigor on the rare music which contains sub 35Hz content; plus the increased upper-bass kick and dynamic punch which the dedicated 3rd way of Codex produced. With the bigger 1.7" Wavecor cone tweeter and 5.9" midrange identical and the Midex woofers very similar to the narrow-band upper-bass coupler of Codex, the majority of the bandwidth and in fact the entire gestalt of the presentation really were shared. That made Midex a slightly smaller, lighter more affordable/affable alternative which happened to be demonstrably easier to drive than that hidden 10" woofer-in-a-tiny-box inside Codex. As such it did brilliantly off the miniature but potent new Bakoon AMP-13R. Exploiting this to stick to the always attractive downsizing theme, I eliminated the Wyred4Sound STP-SE MkII preamp and LinnenberG Liszt or Gold Note PA-1175 MkII monaural amplifiers from the equation. The tiny black Bakoon filled the room at less than half mast on its gain pole, leaving absolutely nothing under the table whilst simplifying box count and wallet strain." 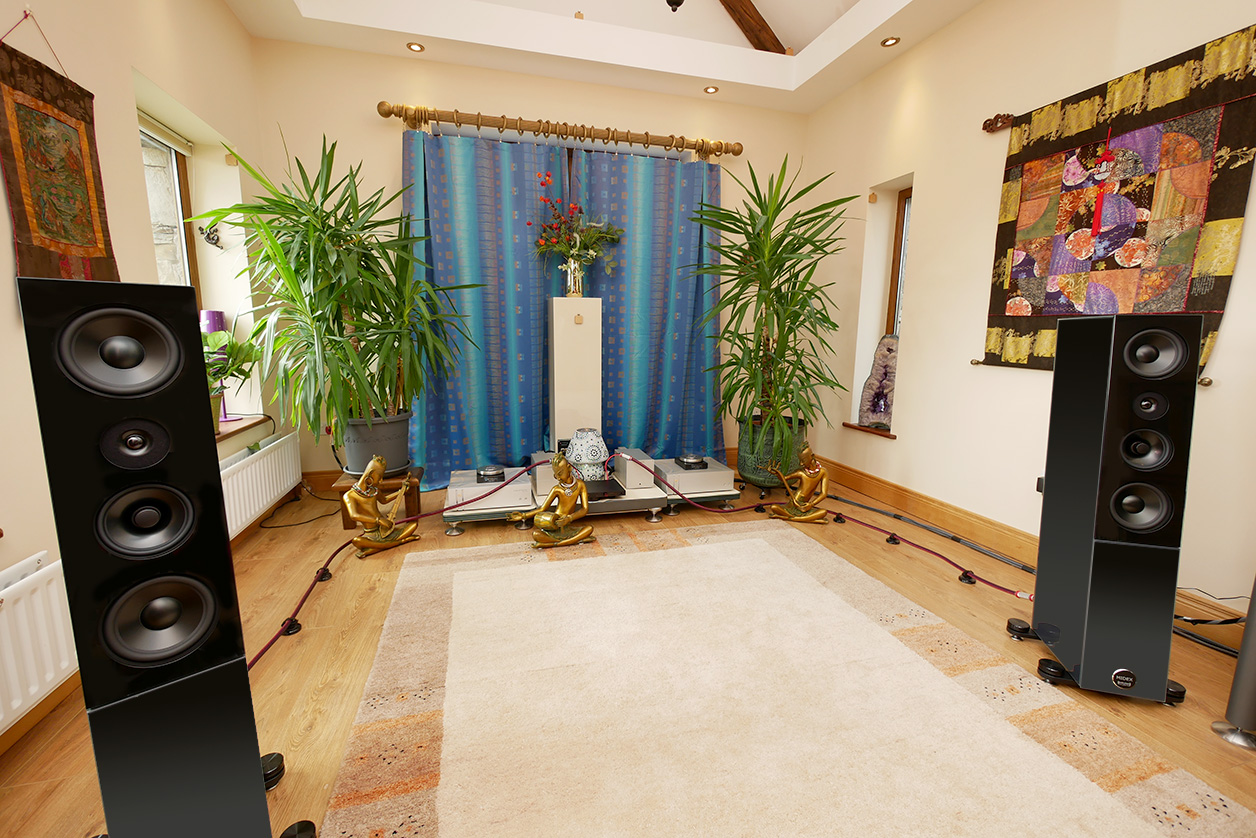 "Enter Joël Grare's clavicloche on his evocative very well-recorded album De Pas Sous La Neige. It's a one-of-a-kind 3½-octave chromatic assemblage of precisely tuned Swiss cow bells. It required no knowledge of what those sound like au nature, in the Swiss alps off the neck of a Fleckvieh whose milk is destined for Cailler chocolate, to notice how energetically loaded the harmonic spray and oscillating metal-molecule action was compared to that of lesser midrange and particular tweeter units."

"With 'lesser' here I mean the ¾" Danish Hiquphone soft dome in our Kroma Audio Mimí; and the inverted Accuton ceramic dome of our Albedo Audio Aptica. Ditto the inverted carbon funnel of German Physik's HRS-120 doing Ohm/Walsh widebander duty from 200Hz-20kHz. Audio Physic's deceptively vintage-y cone tweeter aced them all on dynamics and the tracking of upper harmonics embedded in steeply rising percussive transients, then the extent of their sustained bloom and decay lengths. Don't underestimate this driver's transparency and reflexes due to its unexpected geometry or diameter. It just takes a direct-coupled amplifier of unusual bandwidth and purity like the Bakoon to reveal its full potential and sail right past very pedigreed competitors."

"How to demonstrate superior timing with a sample track? You'll experience it as a lossy music file through crappy computer speakers or throwaway ear buds. No matter. Listen to "Sancti Petri", a simple rumba on which Jorge Strunz (1st solo), Gerardo Nuñez (2nd solo) and Ardeshir Farah (3rd solo) trade virtuoso guitar riffs on the Calima album. Regardless of how compressed the sound quality of your personal music stream, there's not a chance of a mistake. Compared to the Spanish flamenco master who holds the recurring theme, the timing of the other two is sloppy and confused. The phrasing articulation of Gerardo's playing operates in a far higher league of precision. Demonstrably, it also leads to a more elegant delivery for his solo. His timing or rhythmic alacrity is superior."

"If you've heard and understood that difference just now, you keyed into perhaps the Midex attraction. And that's not a function of popular response graphs which seem to validate quality. Our 10" Polish widebanders without filter parts direct-couple our amplifier outputs to their voice coils. From that I can tell you that the timing performance of the multi-way Midex and Codex are very close to a filter-less speaker."

That's what I'd said in the Audio Physic review whilst the AMP-13R was in the driver's seat. All of it thus applies to today's amp as well. That wraps up its core virtues of speed, timing, stunning resolution, wet glossy textures, developed tone and intense immediacy. In fact, this amplifier becomes an actualizer of your tweeters' highest ambitions. Whatever they're ultimately capable of, this circuit will reveal.

First amongst equals. To the letter, all of the above also applies to headphones. After all, it's the exact same very advanced and not some dumbed-down secondary circuit which drives them. With the inefficient HifiMan Susvara a well-known headfi benchmark for absolute power corruption, the AMP-13R, on our sources and for my ears, already went plenty loud in low gain. High gain could have melted my brain. That suggests that with this newest Bakoon, no headphone currently made is beyond your reach except for Raal Requisite's SR1a which does want ~100wpc. Until Bakoon's AMP-41 and AMP-51R adopt the new Jet-Satri circuit refinement which uses no degeneration with the usual emitter resistor—that other form of negative feedback as Nelson Pass calls it—it also means that out of this super-clean bunch of three, the smallest one is not only first but first amongst these equals.

Which rather inexorably leads to our twin award between HifiKnights and 6moons. Dawid Gryzb's Victor accolade represents the shocked reaction of someone who'd never heard any Bakoon before. He had no notion what to expect. To re-read his review, click on the award graphic. That gives you a solid 2nd opinion embedded in different ancillaries, in a different room and to another set of ears. 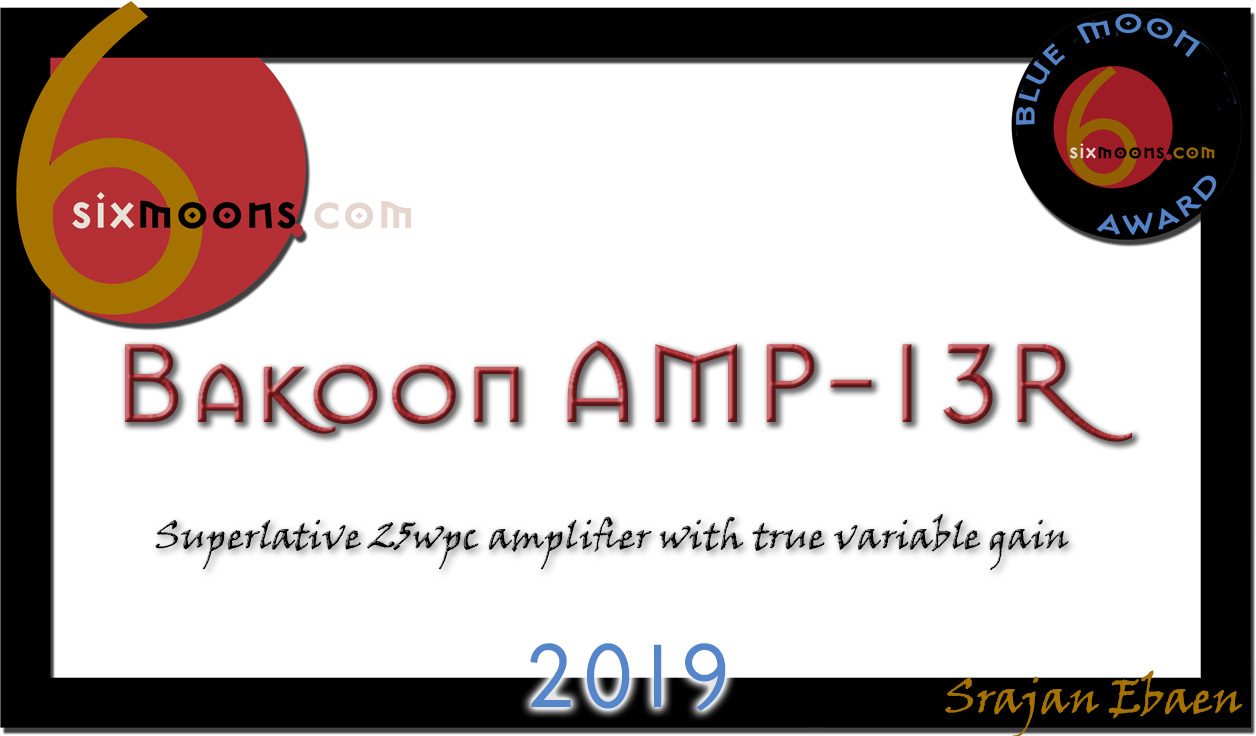 As a long-time owner of the AMP-12R predecessor, I'm now trading that in for the twice-powered replacement with its all-new circuit. Soo In tells me that my 12R will end up in their headquarter's Bakoon museum where they keep a sample of each model they ever made. Unlike the usual side effect of progress and inflation over time—a salty price increase—the AMP-13R actually costs slightly less than the AMP-12R did but adds remote control. And it does run every bit as hot. On that count and the attendant sonics, it's more of a class A than class AB affair. If 25/50 watts into 8/4Ω have you covered, the Bakoon AMP-13R is my favorite solid-state amp. If you need 200 watts, the LinnenberG Liszt comes closest of what I know, albeit not with the same gloss and this ultimate degree of resolution. But the Bakoon needs no preamp. That short sentence adds significantly to your return on investment. So yes, very good things do come in very small packages. This goes well beyond Bonsai Audio 101. Call it 1001!

Soo-In Chae comments: "It is our honor to receive such wonderful comments and the award. The AMP-13R really sums up my 10 years of hard work at Bakoon for something very special. I believe we have gathered a good amount of knowledge and experience to continue to broaden our product line further. At this moment, we are all set with three amplifiers and I hope you’ll enjoy the 13R for many years to come. I’m unsure how to make anything better but you never know in the next 5-10 years. I also look forward to reading your other reviews with the 13R, such as Martin’s Vox 3f speakers arriving soon. I’m getting the next pair for our local Korean market so it would be nice to hear your wisdom also for this combination. All in all I hope to come back with something special again, hopefully in the near future. Until then, I’ll follow your reviews and try to say hello from time to time. Thank you again for the journey together."