Ranked. To give me a final review option, Alain asked whether I'd prefer Lieutenant or Capitaine. For size reference, he provided shots of an already veneered M1 which I was very familiar with; then raw Ply cabs for Capitaine to the left and Lieutenant to the right. To fully exploit its now 10" Beyma woofer, the one dimension of Cap'n which scales up the most is depth. Whilst a tad shorter than the not shallow M1, it's still considerably deeper. From a practical and room perspective, I didn't think I should pull rank. So I asked Alain which one he liked better—dads always hate it when pressed which son they love more—and how much lower the Beyma woofer with its larger cubic volume would go than his custom 8-inch Audax carbon woofer in the smaller box. 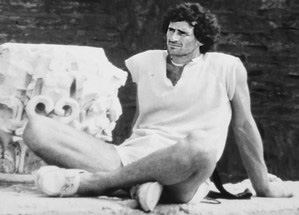 The raw graph Alain provided next showed that Lieutenant was -3dB/32Hz whilst Capitaine would make it to ~27Hz. Plus, Lieutenant was more than 3dB more efficient. I'd thus stick to my assigned rank. I rate sensitivity higher than a few more cycles and will always prefer a smaller enclosure if all else is equivalent or nearly so. So my gig inked with the twin-tweeter pod and, since I was given a choice, a high-gloss cherry finish. Last but not least, hadn't the preceding narrative suggested that Alain was rather keen on his custom woofer with the carbon Audax membrane? That's the one I wanted to hear then.

If I just had to hit 20Hz on a moody afternoon, a Zu Submission subwoofer with Pál Nagy's outboard 40Hz hi/lo pass filter would easily oblige. No need to put that burden on a passive three-way. At least that's how I think about these sub.liminal matters.

"It's done. Tonight Antoine and I will have wired up the two in stereo and compared. This is by far the best speaker I've ever made. Antoine thinks the same. As beautiful as listening to headphones or being in a concert. Now the midrange is on the same qualitative level as the tweeter." When one uses one's very own tweeter, it stands to reason that ultimate happiness shall rely on a midrange that's likewise one's own. Alain now had both [at right when he was an actual lieutenant]. 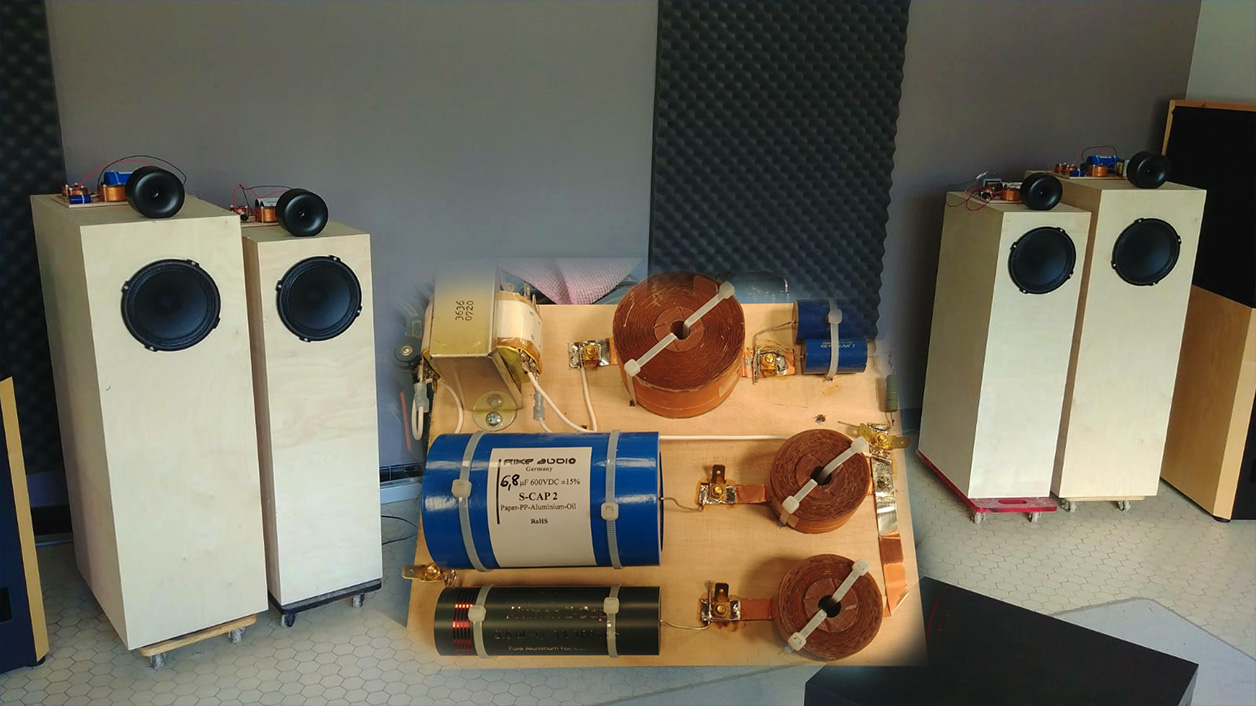 This lengthy tale would soon arrive at its final straights, with Antoine in his Britanny woodshop dressing the cabinets. It'd be the first time in my reviewing career that, at least to my knowledge, I'd be listening to bandpass bass. The 9.8" woofer inside our Audio Physic Codex too is hidden in a sealed sub enclosure to then communicate with the outside world through an invisible down-firing slot port right behind the front baffle's lower edge. The Germans simply don't refer to this loading as bandpass anywhere in their literature; nor did designer Manfred Diestertich ever call it such when I queried him on details for my review. From Codex ownership I just knew how it is easier to place in a room than most rear-firing ports. Now I expected the same leniency from Lieutenant.

"I'll recapitulate my dispersion choices. Regardless of quality, tweeters quickly get directional. At its own height, a ribbon tweeter has good on-axis linearity but it goes directional with changes in height. I started with the basic idea that when a cymbal produces its vibrations, the wave spreads almost spherically so develops uniformly in all directions. A part of it is heard directly, another part arrives late as reverberation. With real-life music, sounds reflect off all the walls and bodies in space but none of it bothers us at all. Instead, it heightens the experience. This gave rise to the double tweeter concept. I wanted to reproduce this atmosphere of the reverberant diffracted waves. It adds a more pleasant and realistic dimension to playback. For my 21cm Vega midrange, I wanted dipole radiation because across this bandwidth I like Siegfried Linkwitz-style open baffles. My short horizontal TQWT controls this behavior very well and while the rear wave is out of phase, there's no interference due to the short circuit of the TQWT. This creates matched atmospherics with the tweeter. The 4th-order bandpass bass exhibits the best impulse response. Particularly at low frequencies, timing becomes extra important because our hearing's pitch recognition and localization weaken. This bass tuning also gives more power from a smaller enclosure [see next graph]."

"The tuned open volume facing the woofer's front creates this band pass with a plateau and two steep natural slopes on either side. The pollution after we simply have to filter." 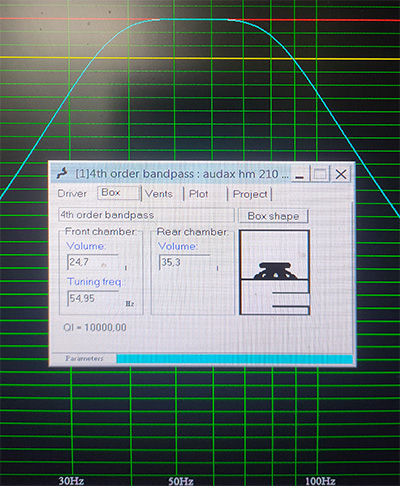 "For music playback, a tweeter is of great importance because it creates the leading edges. It's why I always use the same tweeter across all my models. My favorite midrange for the last 25 years has been the 21cm Vega membrane with 220cm² cone surface made by Applications Acoustiques de Composites or AAC. They operate as a subcontractor to Harman Kardon and B&W and also manufacture today's Audax drivers.

"Until now I mounted this membrane to an existing Supravox basket but still aim at doing my own basket and motor. My French machinist who already makes my tweeter horns is interested to also make a midrange motor.

"As to why Zero Junior split into two, for music in the home Lieutenant is the minimum size for good sound with really powerful bass. Capitaine represents the maximum size a woman will tolerate in her living room. That now allows for bass which seriously begins to resemble reality. By sharing the same tweeter and midrange, the general sound quality is exactly the same. Capitaine has fuller bass with more weight in the lower midrange and a wider deeper soundstage without losing definition in the midrange and upper midrange. Lieutenant is more lively and a little faster but shows less serenity. So it's a matter of taste in fact. The woofers low-pass at 6dB/oct. to eliminate intrusion into the 300Hz range.

"One must be realistic of course about the true requirements to reproduce a bass or Japanese kodo drum. Now forget all about small speakers. It gets very complicated because we really need large cone surfaces. So the primary difference between the Zero models is the power and realism of the bass. [At left the bandpass simulation for the Audax carbon woofer.]

"The upcoming Commander project with twin woofers will take seriously more power and achieve true 97dB sensitivity with biwire terminals. 97dB reflects the max for my midrange which I otherwise pad down with an autoformer to match to the woofer."

When asked whether potential woofer repair calls would be problematic given the internal location, "not at all, it's very easy". Also, "Lieutenant is our fastest speaker. The moving mass of the 210mm Vega is between 9-10g, that of the carbon woofer is just 23g. You can even adjust the midrange with the autoformer relative to the bass; and there's a passive bi-amp option to drive the woofers with their own amp."

With 250w/8Ω high-current monos on hand, I didn't think I had to bi-amp. Alain agreed. So single wire it'd be. 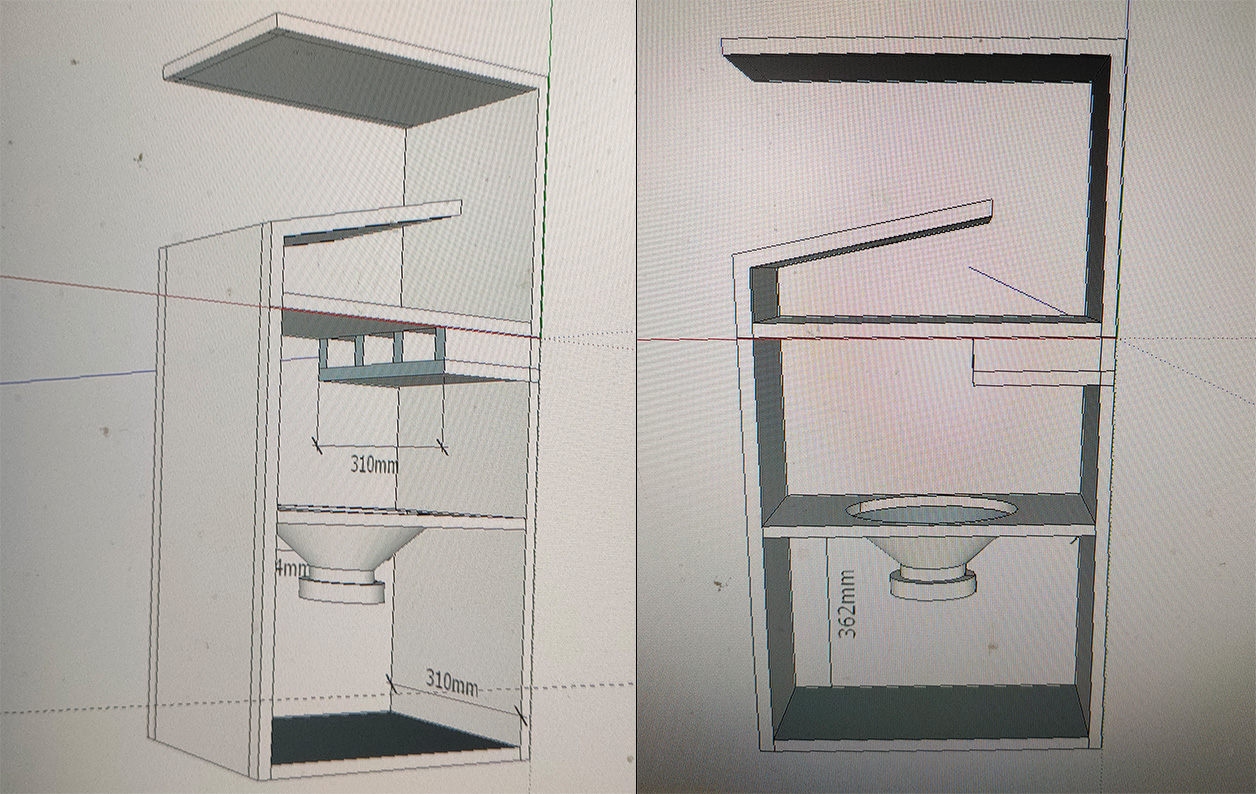 "Whether to vent in front of or behind the midrange cone is a critical question." As we see next, the final design vents out the back.

This now concluded the origin story of the Aurai Audio Lieutenant.

Lieutenant in applied cherry veneer prior to lacquering.