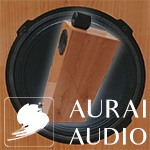 Alain Pratali's Aurai Audio Lieutenant unspooled quite the talkative tape across the year that we communicated ahead of this formal review. That extensive tale formatted into its own origin story. Today's pages now can be about just the final speaker's performance. All tech specs, design details and philosophy are covered already.

Owners of subwoofers have this knee-capped Z84 version. It does away with Lieutenant's invisible 4th-order bandpass woofer to be replaced by an external bass box or two. But the monitor does retain the horizontal TQWT or tapered quarter-wave tube behind the custom dipole 9" Vega membrane with Nomex surround. That loading demands an unusually deep cabinet. Retained too is the choice of single horn-loaded tweeter shown; or Lieutenant's back-to-back bipole pod above. The tweeter's offset behind the baffle locks in physical time alignment with the midrange.

When my loaners' DB Schenker tracker arrived by email, it announced one 125kg piece. I was rather hoping that a goodly chunk of that fell to wooden pallet and overkill crate. Two monitors also inbound just then declared a total ship weight of 30kg instead. Would Lieutenant grossly outrank me?

My dad had ended his naval career as Kapitän zur See with this epaulette. I suddenly felt rather more like a seaman 2nd class. But there was always spinach; lots of spinach. With our deeply graveled driveway, Schenker's pallet jack ground to a halt despite their man's sporting efforts. Manual heaving was required to get the big palletized box onto the red brick porch. Ply lid removed, the speakers looked at me in a 69 position. Standing the crate on end for easy walkout would turn one speaker onto its head. Despite protective foam spacers, that felt funky. Getting the boxes out safely by myself was tricky. At this size, two separate crates cheek to cheek on a pallet would make life easier. Not all clients have burly lift buddies on hand. 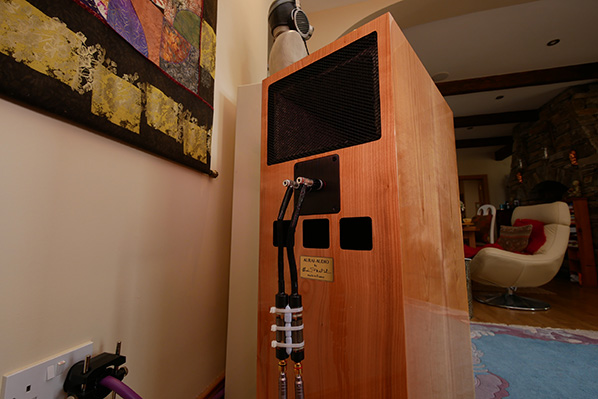 Routing the tweeter/midrange hookup wiring to bypass the bass bin should avoid cable microphonics from a high-pressure environment. But it also moves the terminals to a high 80cm off your floor. That wastes good speaker cable just like standard monitors do on stands. Our LessLoss Firewalls took up some of the slack. A  black metal grid covers the opening behind the midrange and the three bandpass vents below it neatly black out their edges.

Unlike Alain's familiar M1, Lieutenant sits on outriggers. Those jut out diagonally from the front corners just enough to clear. They do the same in the back just with a narrower stance. The conical blunt-nosed footers are height adjustable for leveling.

A recessed bottom plate in the cabinet is the obvious access point to the hidden carbon-fiber woofer. If necessary, servicing this custom bass weaponry will be easy.

Face on, the twin tweeter pod in solid black-anodized aluminium seems to casually sit on edge like a coaster on a pub bar ready to twirl. Its mounting bolts and wiring are neatly hidden. This conventional layout of midrange beneath tweeter inverts the M1's array. That also lowers the latter's unusually elevated soundstage. Lieutenant observes the musical action from a more standard perspective than looking up.

With instant proof of life as is typical for speakers, I set a Soundaware SD transport on endless loop. Warm-up calisthenics are mandatory. Only adolescents dream of a heaven with endless parades of virgins. Experienced ears of either sex much prefer experienced lovers. Those take time. 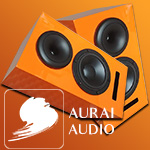 With three prior Aurai reviews under my suspenders, I knew to expect fine book-matched veneers. Once again Antoine Rouault's finishing chops didn't disappoint. As a custom shop in France's Brittany region, he can skin your boxes in any veneer available then finish them matte, satin or high gloss. Should you prefer automotive lacquers for a particular tint, he also does those to perfection as a prior review pair dressed in Hermès Orange had proven. Before we do sonics, allow me a brief riff on ambition as a young man's obsession. At designer Alain's age and station in life, gardening, fishing, painting and similar pastimes become far greater attractions. In his case, it's wrestling with hifi design challenges and the bulging forearms of fellow bras de fer fans.

From my prior reviews, we already know Alain to be a super talented speaker auteur. What we don't know is whether his status as a comfortable retiree can or even should translate into all the marketing efforts and financial risks which young men and brands embrace who chase after the big time. It's well possible that for Alain, the small rural league is all he's prepared to pursue. After all, to a creative character, designing a new driver or dreaming up a new filter is wildly more rewarding than catching up on press releases, shows, ads, website updates and all the other guff which good marketing managers are paid well to confront on a daily basis. If I read the tea leaves right, Aurai are destined to remain an underground and very small brand. But how many people can still see the Aurae wind nymphs after which it is named? Now all is exactly as it should be.