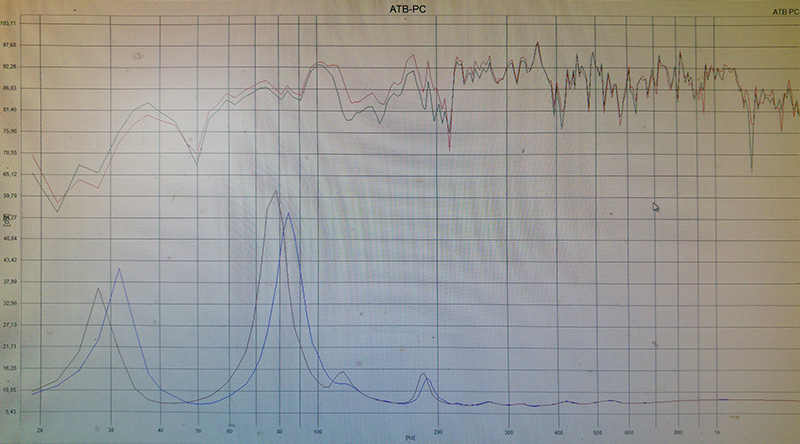 "I asked myself why different drivers sound so very different. I found the answers in my work and tests. I just don't want to give away all my secrets. But consider this. Whatever the cone material might be (paper, polypropylene, aluminium, magnesium, Kevlar, carbon fiber, glass, ceramic), each membrane has its own resonant modes. Everyone hears those differences. Yet I notice that the same filter faults telegraph regardless. Say we correct a bump between 800Hz and 2'000Hz to filter it out. To that extent it's perfect. But whatever the make or model, the ghost signature of one driver versus another remains. Say you like Accuton. Whether it's Albedo in Italy, Tidal in Germany, Mårten in Sweden or me in France, our approaches differ but we still recognize the fundamental ceramic aluminium sound.

"Consider this developmental screen shot. I could gain 3dB/40Hz and barely move the impedance peak up but it would actually telegraph an effect up to 2'000Hz. That would destroy the resolution and clarity of the midrange. I'm no magician. I measure everything then listen to it. The conclusion is plain. Nothing's free. It all interconnects. I might gain 3dB of amplitude at 40Hz but distort the midrange in trade. That's unacceptable. My chief aim is to arrive at the very best 65Hz to 3'300Hz performance I can. For that I need a solution which gives my core driver the best operating conditions. Measurements help me understand what those conditions are. For me audio is a challenge of perfection. My real goal is actually to discover the best of myself. I want to push myself to the very ends of my intelligence. When I designed the M3 and M1, the objective was comfort, pleasure and emotion. It wasn't a search for perfection yet which their concepts didn't allow. Again, I have a very precise sound inside of me. I know what I look for. To me sound is like modeling clay. I can sculpt it so am never offended when someone doesn't like my job. I made the sound I hear. It might not be the sound you hear."

For some insight into the Supravox connection as a supplier one doesn't hear much from, Simon Lee takes us to the beginning of his cooperation with Alain. "Who invented the M speaker models? Alain Pratali. Simon helped as producer, listener and reviewer. Alain has everything including manufacturing skills. But he can't do all of it especially the cabinets. So he asked Antoine Rouault to make them for us. The actual speaker design from concept to driver selection, modifications of drivers, crossover design, prototyping, tuning, retuning is his. As the one who asked for this, I help with voicing whenever I visit Marseilles so we listen together. Almost 20 years ago I visited Alain's home to hear his amps and speakers. I stayed in Marseilles for about two days. We had a good time listening and meeting his neighbors. During my visit I was so surprised by the sonic difference of his system with a modified Oracle amp and original Model One prototype speaker which has been in my office ever since. When I returned to Seoul, I could not forget the experience. So I asked Alain to sell me the speaker I'd heard. He was very kind to sell me his only pair. I still have it. About six years ago, I had a chance to work with the ODE group, one of the biggest import companies in Korea. They wanted their own audio brand and I introduced them to Alain's speaker. 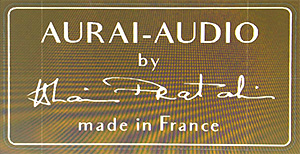 "I wanted more people to hear it so go into actual production. I asked Alain to remake his tweeter and restart the speaker. By then Supravox was in poor shape. They no longer could supply his original mid/woofer. Alain switched to Accuton and Skaaning drivers which I agreed to because he's the only designer who can make them sound excellent. His Model One and Three were very good but ultimately ODE decided against us by asking for more and more design changes we didn't agree with. Around that time I left April Music and started work on my new company Simon Audio Lab. I wanted to keep my dream alive and worked with Alain to make me 30 pairs of M3 and 20 pairs of M1. Those are still playing in Korea. It's very hard to find 2nd-hand pairs. Alain and Antoine worked long and hard to support my dream. I then ran into cash-flow problems which delayed new sales of their speakers. It also meant that they were never introduced at any international audio show. That's when I introduced you to Alain and our M3 to start the process of global exposure. Some months ago Alain told me that he wanted to create his own brand to get himself involved in global sales. I immediately agreed that this would be the right way forward. My own support is insufficient. Our local market can't generate enough sales to justify global distribution. So now Simon Audio is just the importer for Korea and Alain and whoever he signs on as dealers or distributors will start handling the other markets."

This explained how the Alain/Simon collaboration began with a speaker using a Supravox midrange. By the time Alain began design work on the M Zero Junior and M Zero, Supravox was once again in a position to supply drivers. Now he could return to his original speaker, then apply all he'd learned since. This includes commissioning very specific parameters for his new custom Supravox drivers – parameters which in the interim he realized are best and most important for the sound. For more history on Supravox, this article has a lot of data.