Metrum Acoustics were yet another Dutch brand. Their latest Flint DAC comes at a very friendly price whilst the range-topping Adagio obviously demands more.

On the rack's top right sat the Ambre, a Roon-certified digital endpoint with a broad set of possibilities. Be it DietPi or PiCorePlayer, Tidal or Qobuz, Ambre supports the lot. Further on the rack were the Adagio DAC with variable gain and the Forte power amp. We stayed Dutch with Temporal Coherence who presented their new dipole design. The other loudspeaker was the Pyramide. Electronics included the company's preamp and 75wpc power amps. The focus of all their designs is impedance compensation, correct timing, low-frequency correction and radial dispersion. The for now nameless new loudspeaker is a co-development with Hepta. How Dutch can you go after Double Dutch? No idea but Alloado were one more Hollandaise company. Their bread and butter are wall-mounted loudspeakers. New was a 3-way design which contrary to the 2-ways is not meant to hang from a wall but lean against it. Weight dictates such placement. Height is 1.6m and there is a 27cm woofer in a dedicated compartment. Since drilling holes in the venue's walls would have made no friends, all Alaudo loudspeakers mounted on stands. In the next room weren't Dutchies but Belgians. Ilumnia is the name of a company lead by two brothers. One is the inventor, the other the craftsman. Together they designed and created a unique new driver based on an aluminium cone that floats in a magnetic field to eliminate a conventional surround. It requires many parts to construct their driver and far more trials and errors to arrive in production. 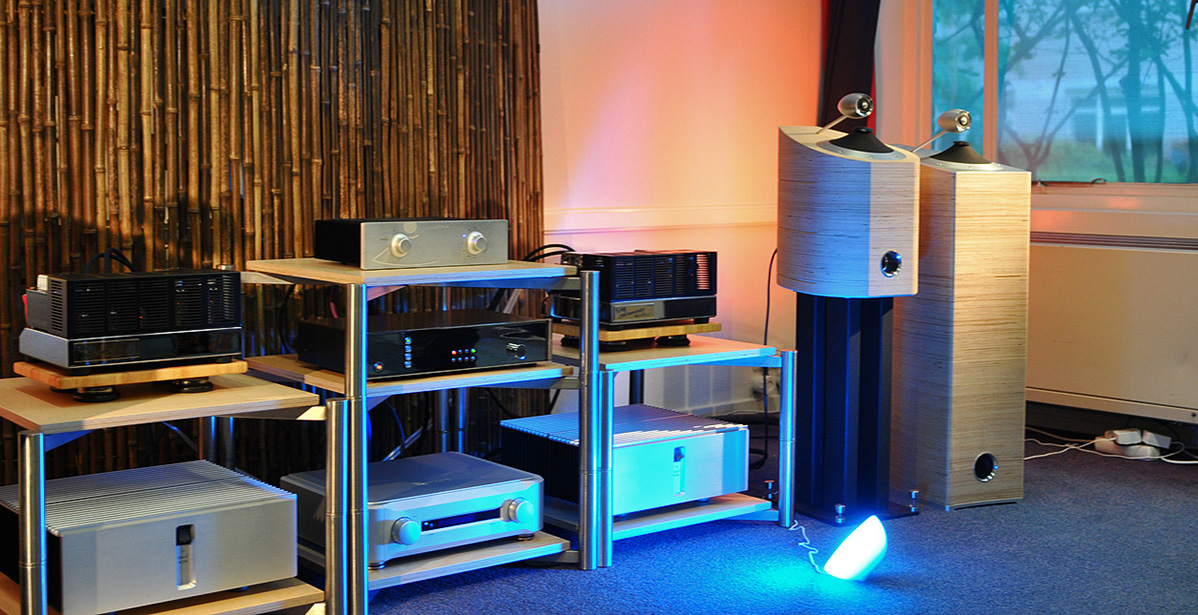 Last year they had introduced the floorstanding Magister and this year we spotted the new stand-mounted Vocalis. Whilst writing this line, we were listening in awe to the Vocalis. With both models in for review, there's a lot more coming on these. In one of the headphone listening stations, hunter/gatherers mingled under the pale green light. 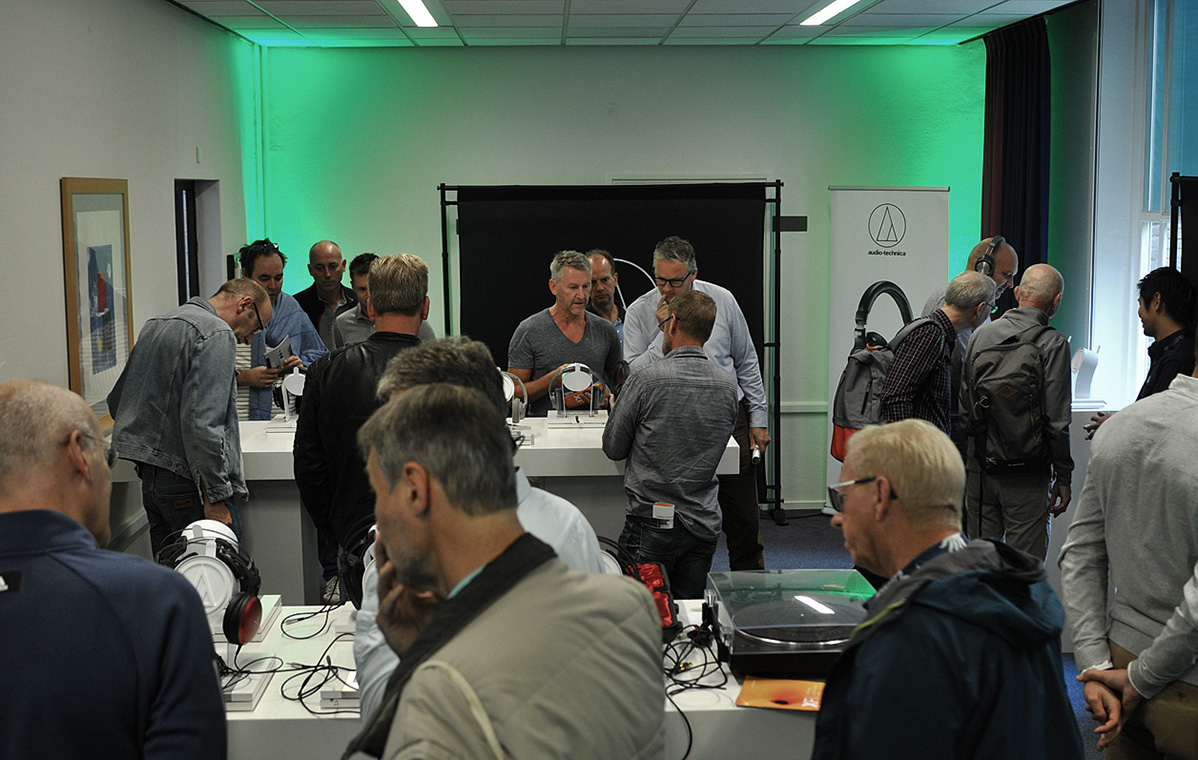 Goldmund brought a pair of their wireless active Satya. Such a concept resulted in a very empty clean listening environment, literally. No cluttered rack, no cable spaghetti, just two loudspeakers with power cables. DSP and DAC plus class A/B amplification are contained inside these 123cm tall, 56cm wide and 63cm deep constructions which put 140kg on the scale each. Luxury comes at a price and Goldmund are luxury but here it was very good-sounding luxury.

The word 'luxury' had already been used but Danish Alluxity too run it in their slogan. Audio Solutions were their speakers of choice. 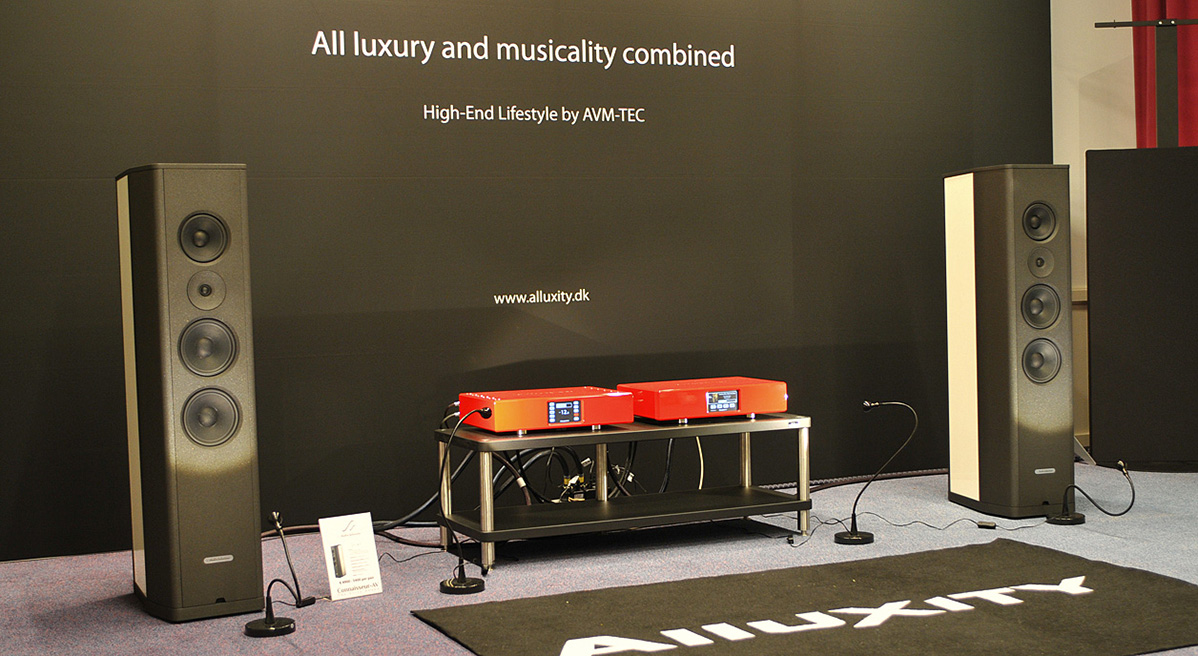 Sonus faber introduced the new Sonetto loudspeakers in combination with McIntosh electronics. Though the name remains, the magic of the original Sonus faber sound under Franco Serblin has irrevocably changed. 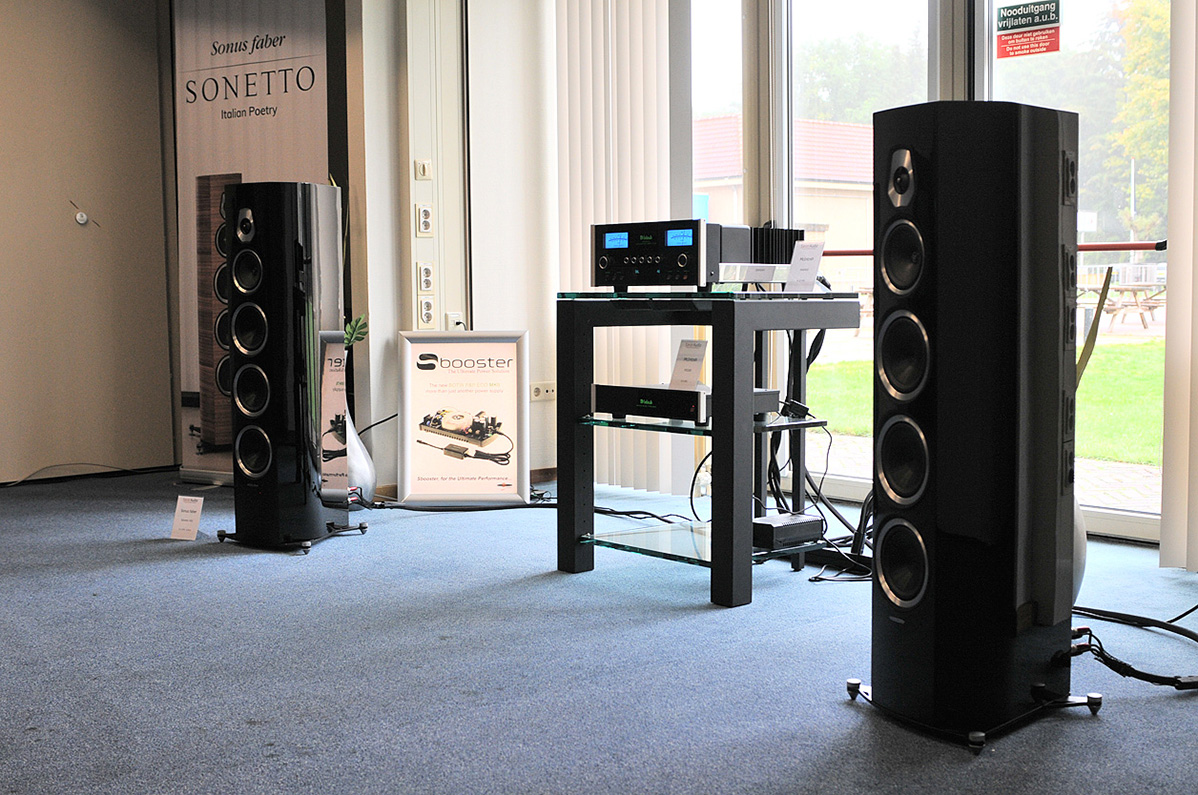 Back to Holland it was with Æquo. On demo were the Blue Moon awarded Stilla with some interesting electronics. First there was the Vermeer Audio Two preamplifier/DAC. That French product was fed by a Kiwi Antipodes EX/CX combination. Just as we saw with Pink Faun and their streamers, these Antipodes streamers performed separate tasks. One ran the server half, the other the renderer. That fed the Vermeer unit which drove a pair of Caas power amps called the Elysian 100 which does the first 20 watts in pure class A. Then class A/B bias continues up to 100 watts. A very strong point of this amplifier was huge bandwidth where many modern—i.e. class D—designs limit it. Caas use ultra-fast transistors and innovative techniques to arrive at a circuit free of any feedback. Anyone looking for classy mono power at the €10K price point should consider these Brits very heavy competitors for top class D. The Æquo men not only have a keen ear when it comes to designing their own loudspeakers, they have very good sense for choosing the right most interesting ancillary hardware. We really hate closed-door show demonstrations [count me in the same allergic group – Ed]. Interested showgoers are deprived of access to something they might buy on impulse, having to wait or return until the door opens and a new demo slot starts. That time could have been used better. How about those who managed to get in but decided to leave after a few minutes? Anyway, when we wanted to get an impression of the premiering Linn Selekt DSM, the Scottish company's streamer slash preamp with room correction, the door remained resolutely close. After a few attempts we cursed and moved on. Alas, when we passed by later, the door just expelled the last batch of visitors so we snuck in for a few shots.

With so many rooms we visited late on the second day's afternoon, we called it a day. We packed our stuff and once again passed through roughly the entire venue again because our room was at one end, reception at the other. What better way to be waved out than by our new friend Zhen who runs vinylvinyl.nl?