Tsakiridis, Auris and TruLife Audio mixed it up in a static and dynamic display of one of the larger rooms. The white loudspeakers were by Verity Audio, the turntable by Origin Live while Falkenohr supplied the Klangmöbel aka racks and Zesto the electronics. 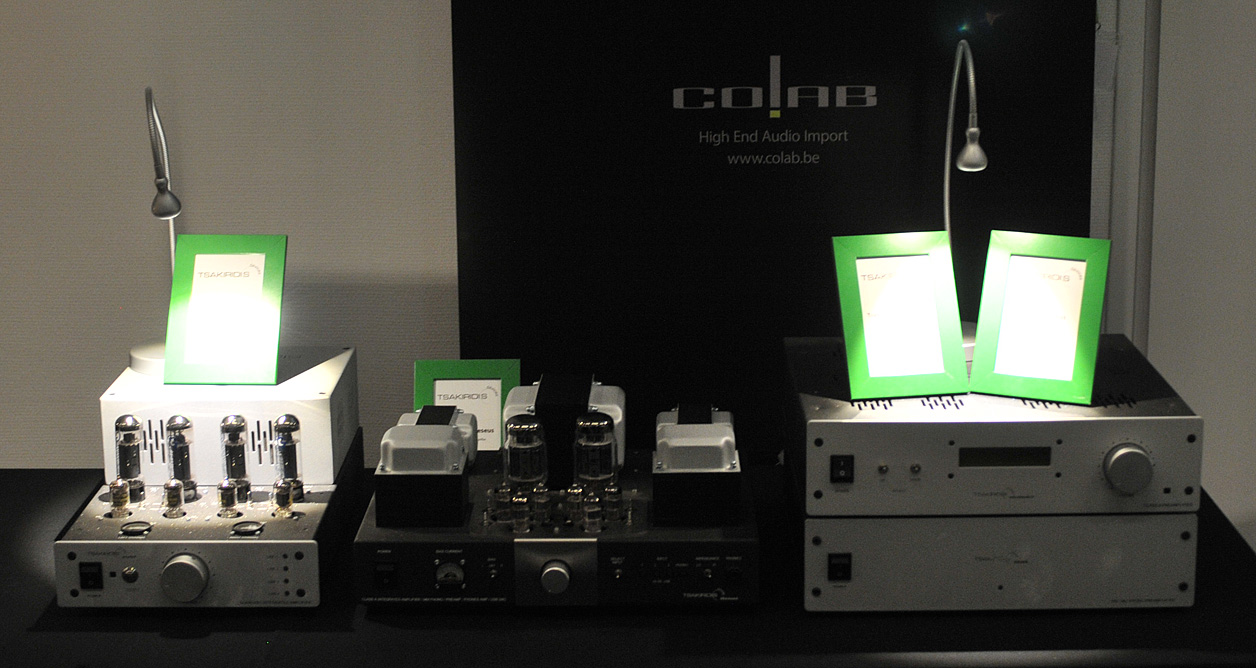 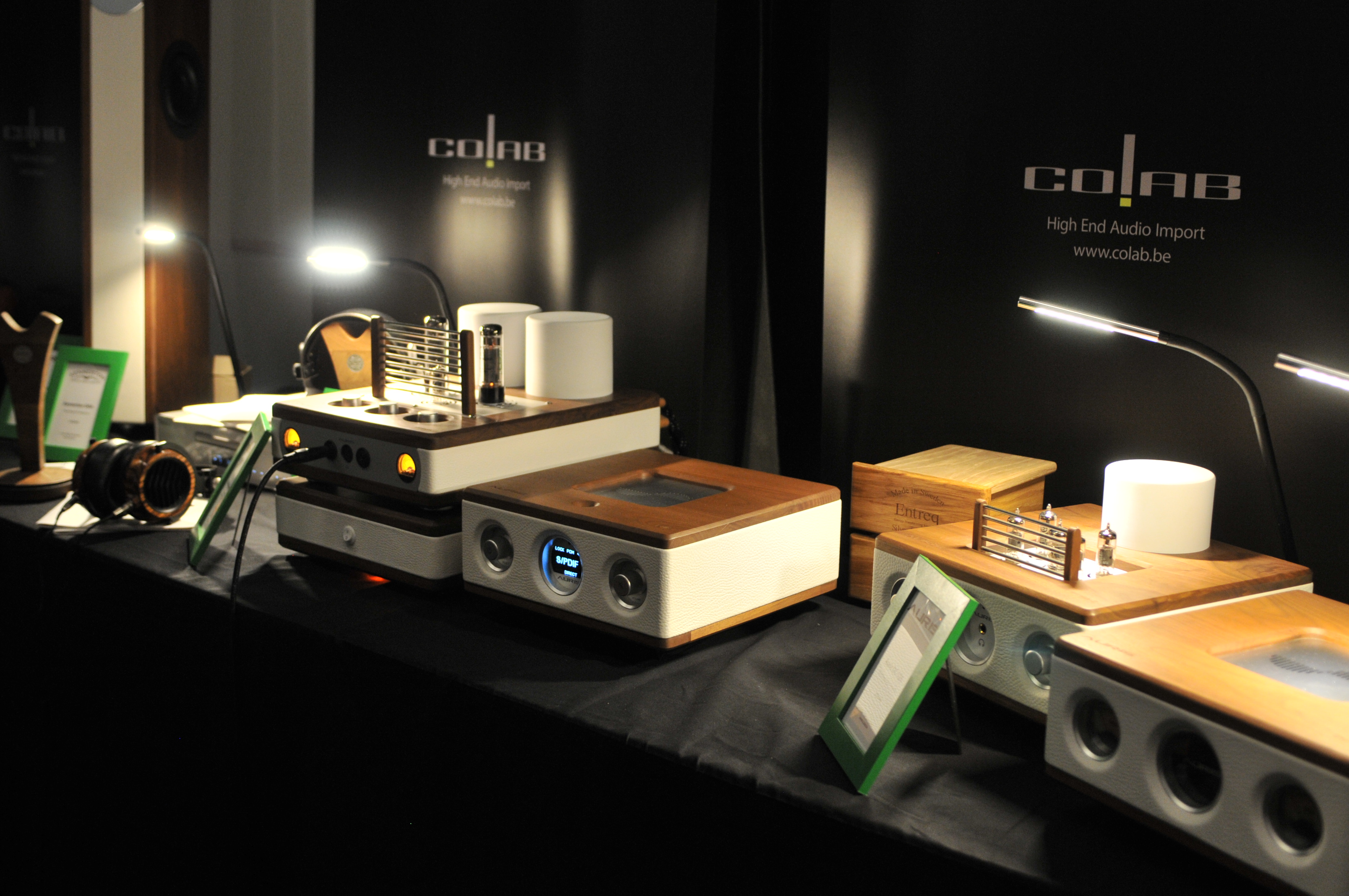 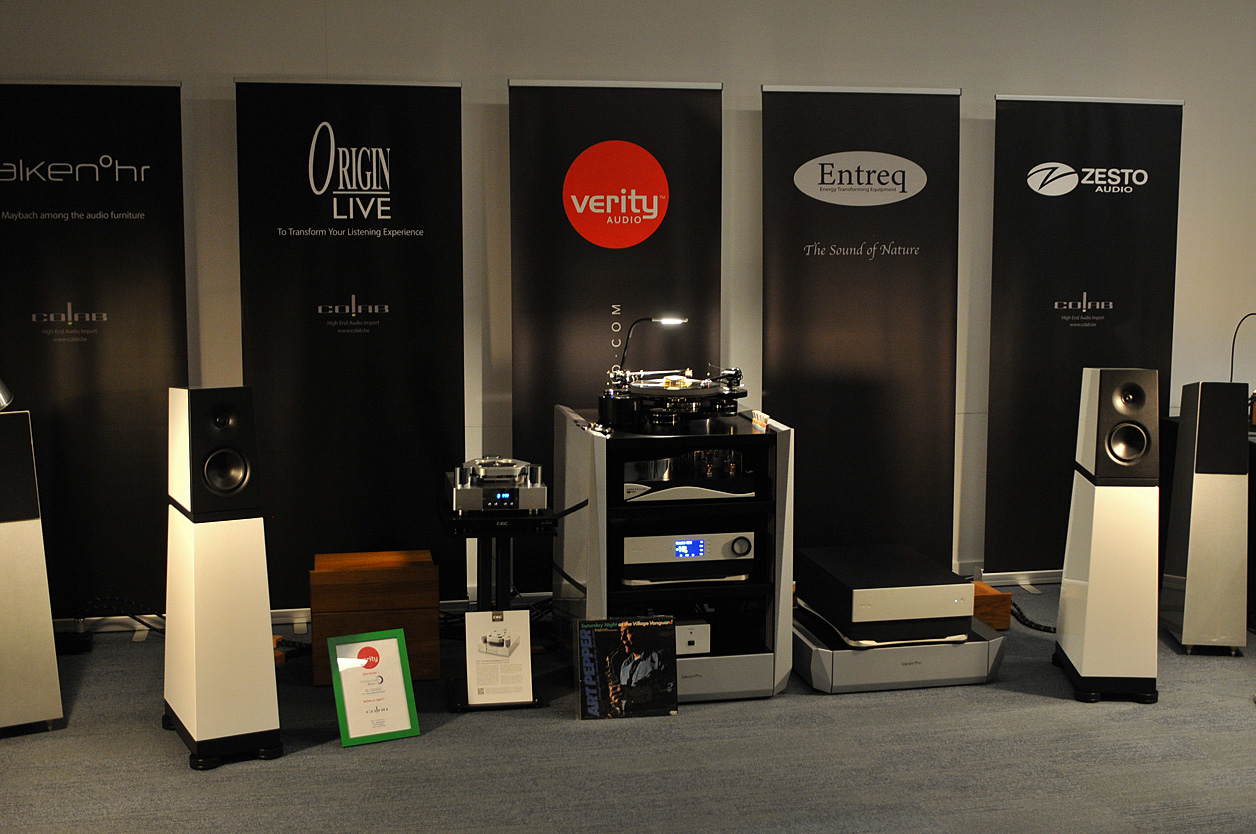 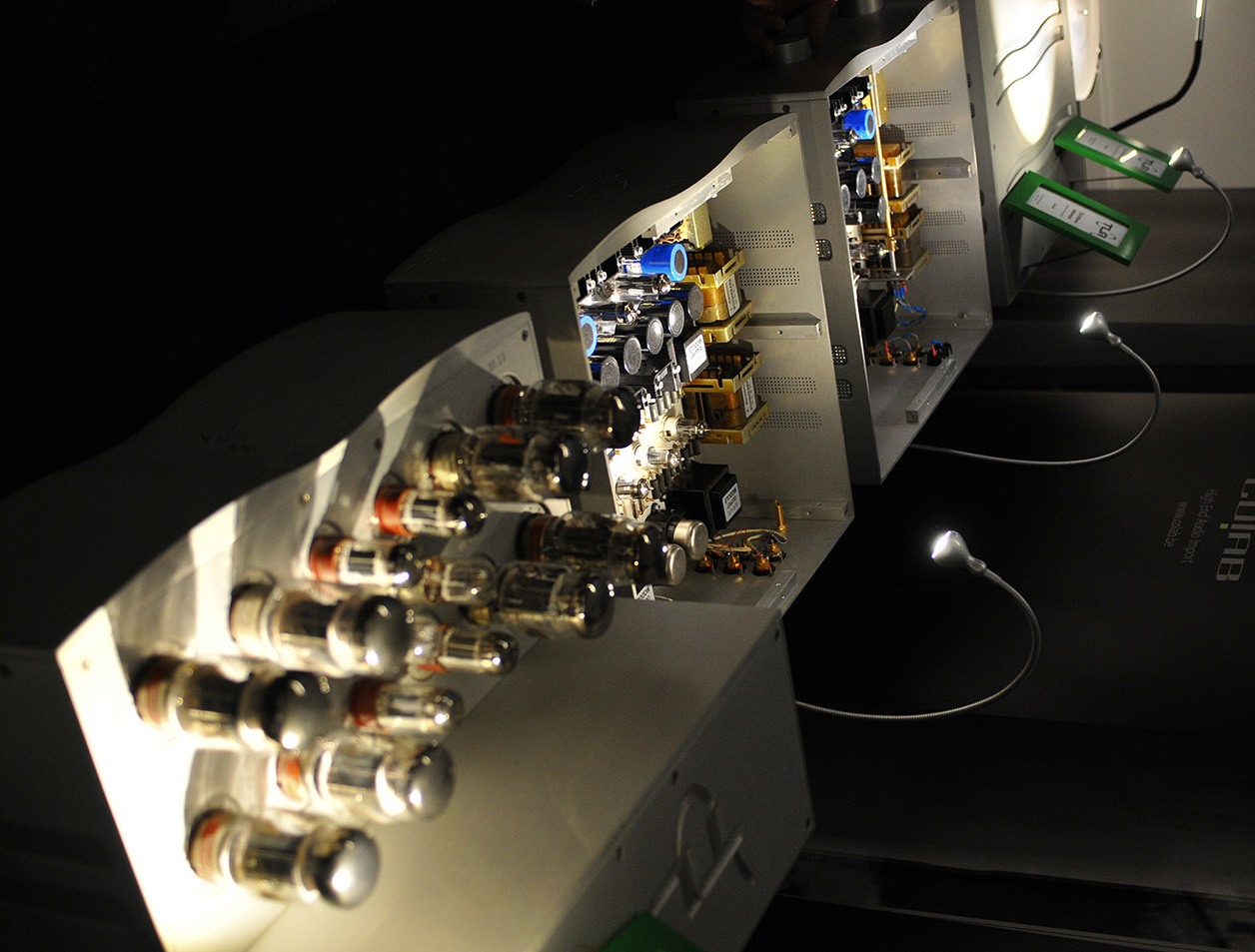 We know many accessories in audio land that can be called tweaks. They all focus on one specific improvement of a (perceived) shortcoming in design or effect. The next room had a plentitude of these audio aids on active display and where possible connected to each other. The central piece was a Synergistic Research Ground Block SE which, as the name gives away, cleans up the ground and introduces an active ULF field. Even the Multivocal Resonator aka brass dish connected to a clean ground. The tall pole was another Synergistic product called Atmosphere which is described as a soundstage sizer/scaler based on a multi-wave RF field generator. Blue/green lights were Creaktiv Systems AIR field equalizers. By means of LEDs, they are supposed to alter the electrically radiated fields in the listening room and thereby enhance the spatial and natural qualities of the music. On the other side of the room were even more such products, many by Dutch manufacturer Kemp. 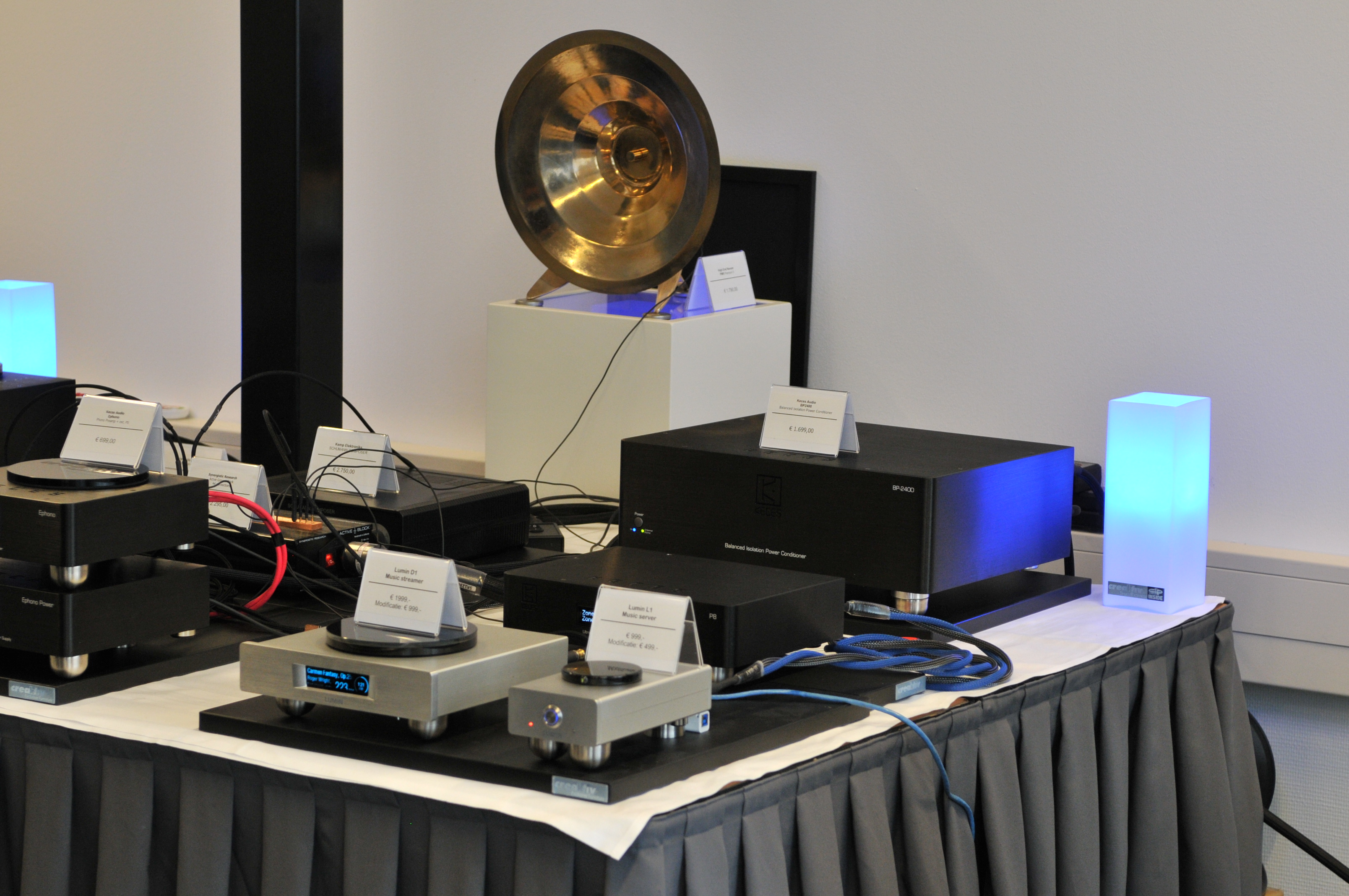 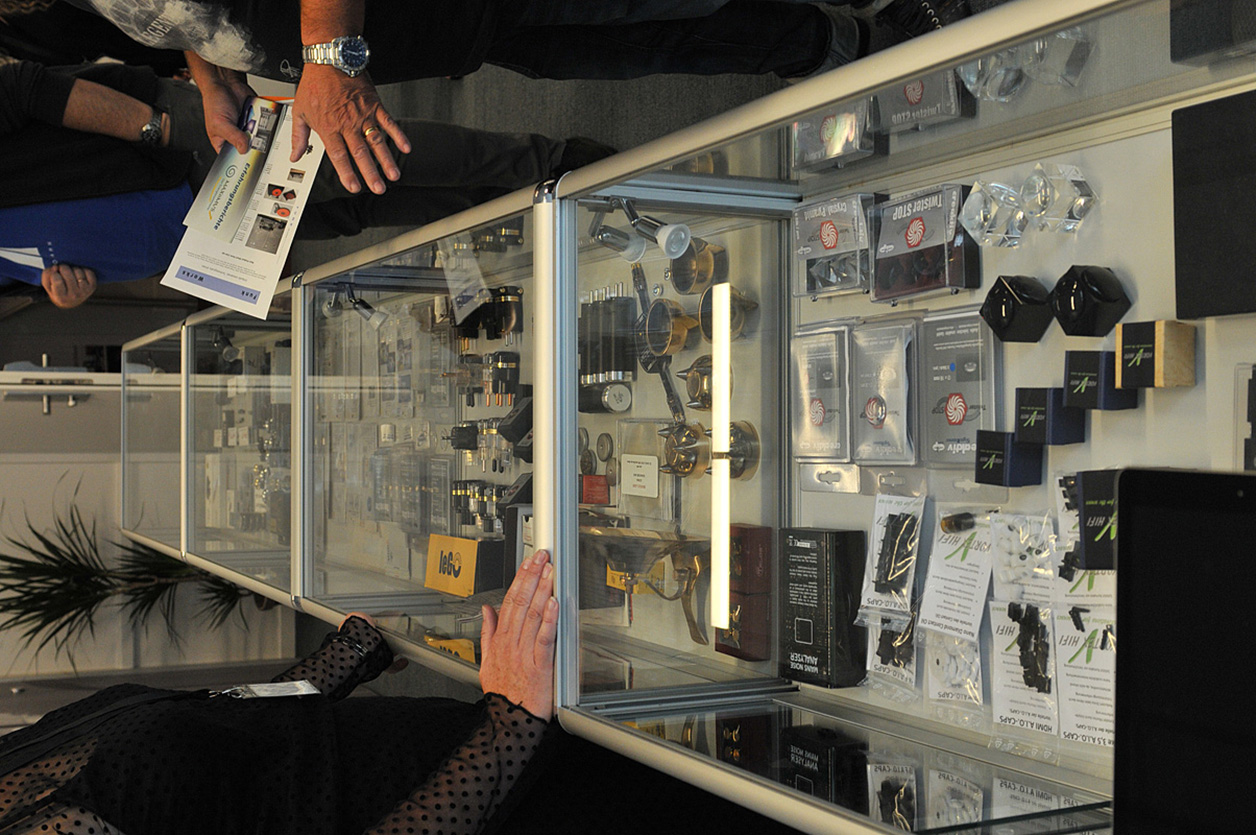 Two rooms, three loudspeakers by Kroma Audio came next. The turntables were Bergmann's model Magme and amplification in the first exhibit came from Zanden's Model 6000 integrated as the eye catcher. Behind the acrylic over of the amp sit 4 x KT120 tubes enabling 90wpc in class A/B. This room demoed the stand-mount Mimi, a 2-way monitor with Hiquphone tweeter and ScanSpeak mid/woofer. Sensitivity is rated at 92dB. This compact monitor was able to fill a fairly large room with a well-balanced sound whose lowest octave was not missed. For their cabinets Kroma use Krion, an artificial stone made with aluminium trihydrate and resins which the Spaniards bond together chemically without screws. The larger model was the Elektra sporting a Hiquphone tweeter fore and aft plus 4 x ScanSpeak Revelator mid/woofers. Sensitivity is 90dB. 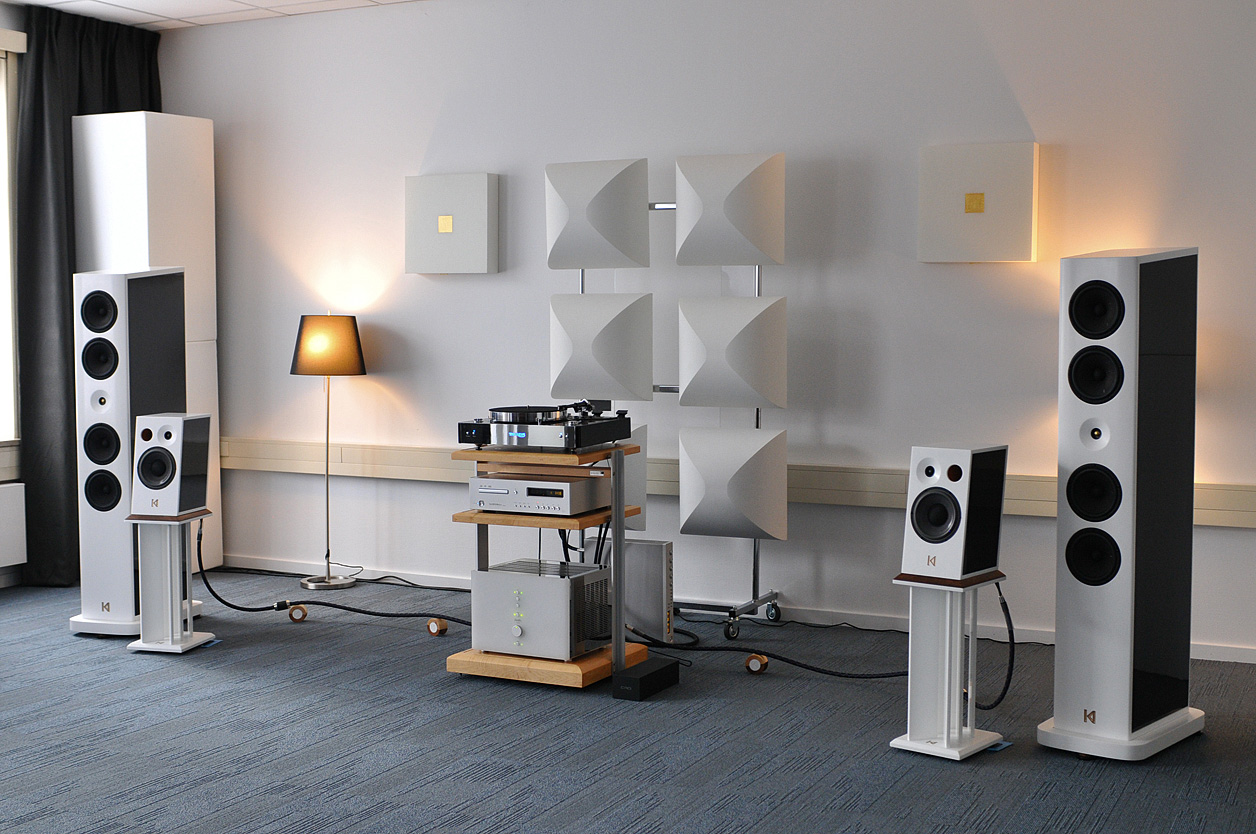 Next door were the Kroma Carmen. This loudspeaker with one tweeter and dual mid/woofers sports two rear ports. In combination with a Bergmann turntable and Zanden electronics including the Model 8120 100wpc power amp, the highly musical quality of the equipment and the presentation in both rooms were obvious, entertaining and educational. Many if not all other exhibitioners could take a lesson from these two demonstrations! 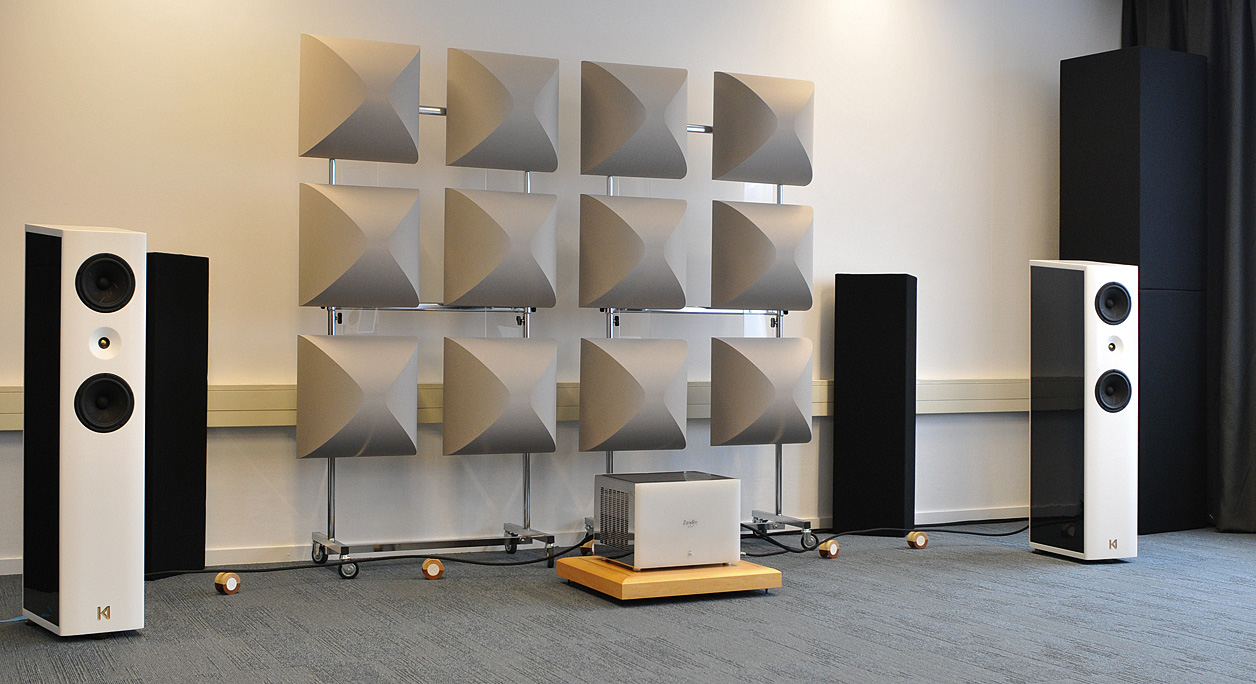 When you say audio show and Avantgarde, you must add Armin. As figurehead of the loudspeaker company, he is uniquely capable of giving a stellar presentation of a speaker system like few others can. In this case it was a bright orange set of Trios with a single set of Basshorns. 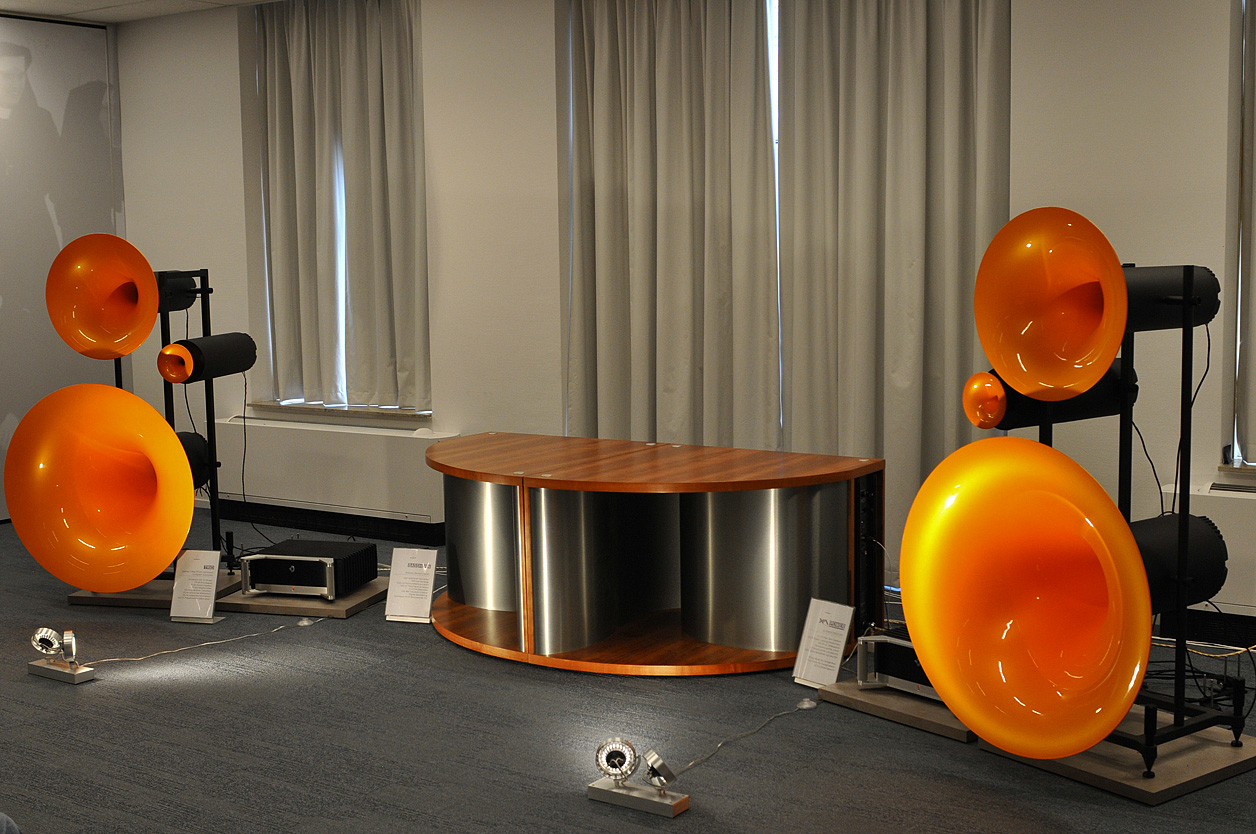 Trafomatic recently introduced the Coleman Editions. At the show, samples included the Pandora monoblocs. Very visible was the Topaz Silk Brown coating, a sort of rubber that not only looks very attractive but has a damping effect on resonances. A Trafomatic Lara preamp steered the Pandora power amps with their SV 811-10 tubes rated at 40 watts. Analog source was a customized Dr. Feickert Blackbird feeding a Trafomatic Evolution One phono stage. In combination with BHC Acoustics Model 1743 speakers which is a 4-driver 3-way rated at 97dB, the sound was open, realistic and pleasant. After the show the Lara and Pandora would be on their way to our place for a review. 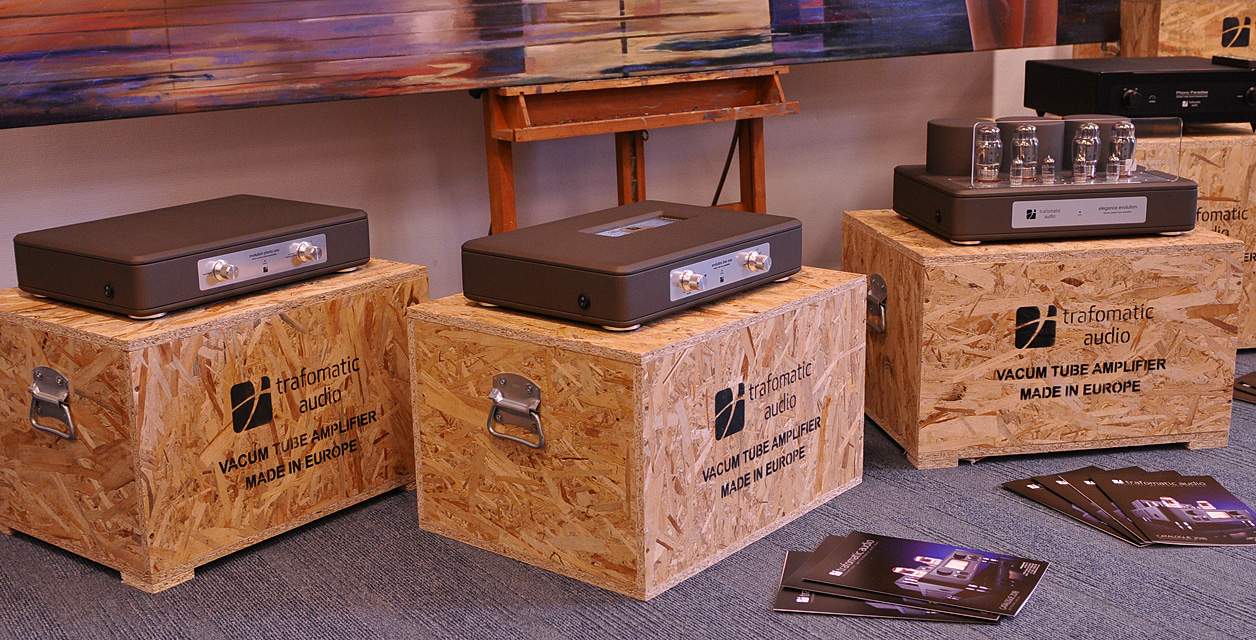 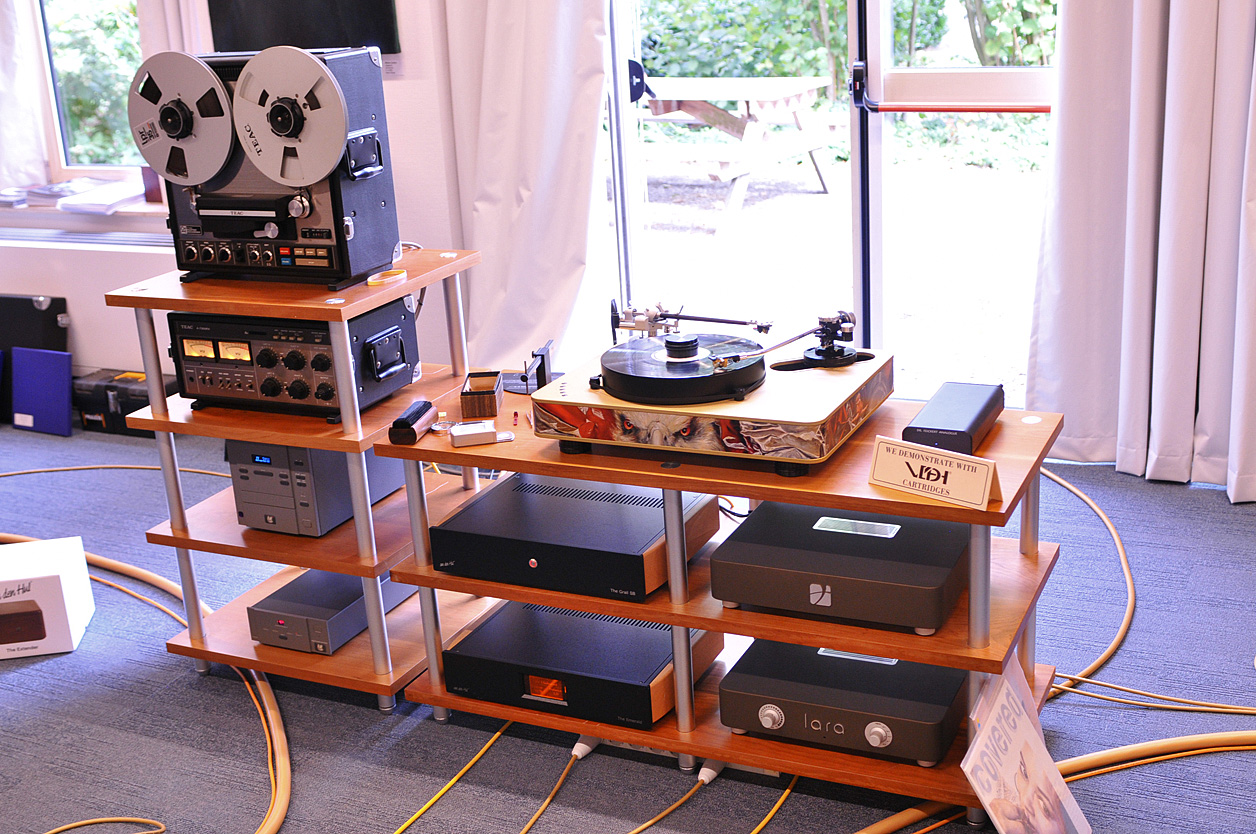 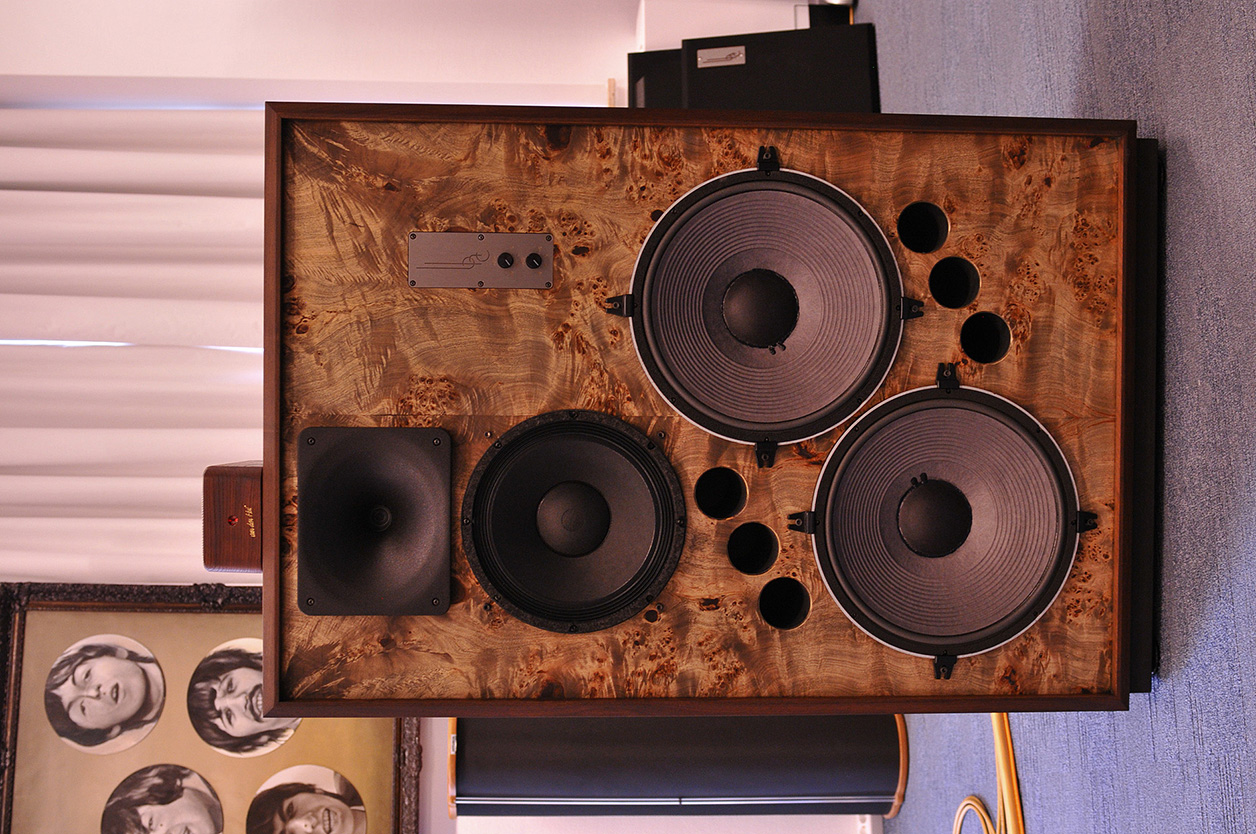 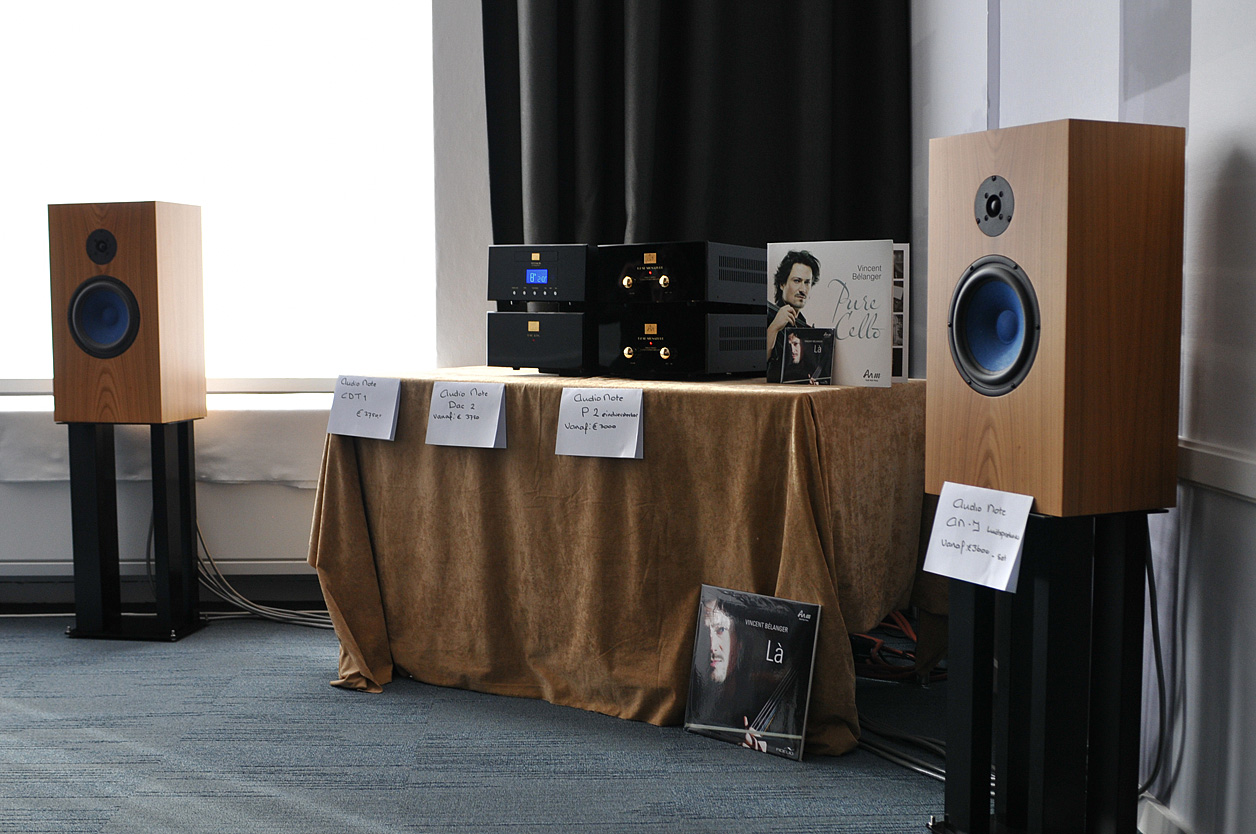 John DeVore's Orangutan loudspeakers played in combination with Chord for a small footprint but large sound. 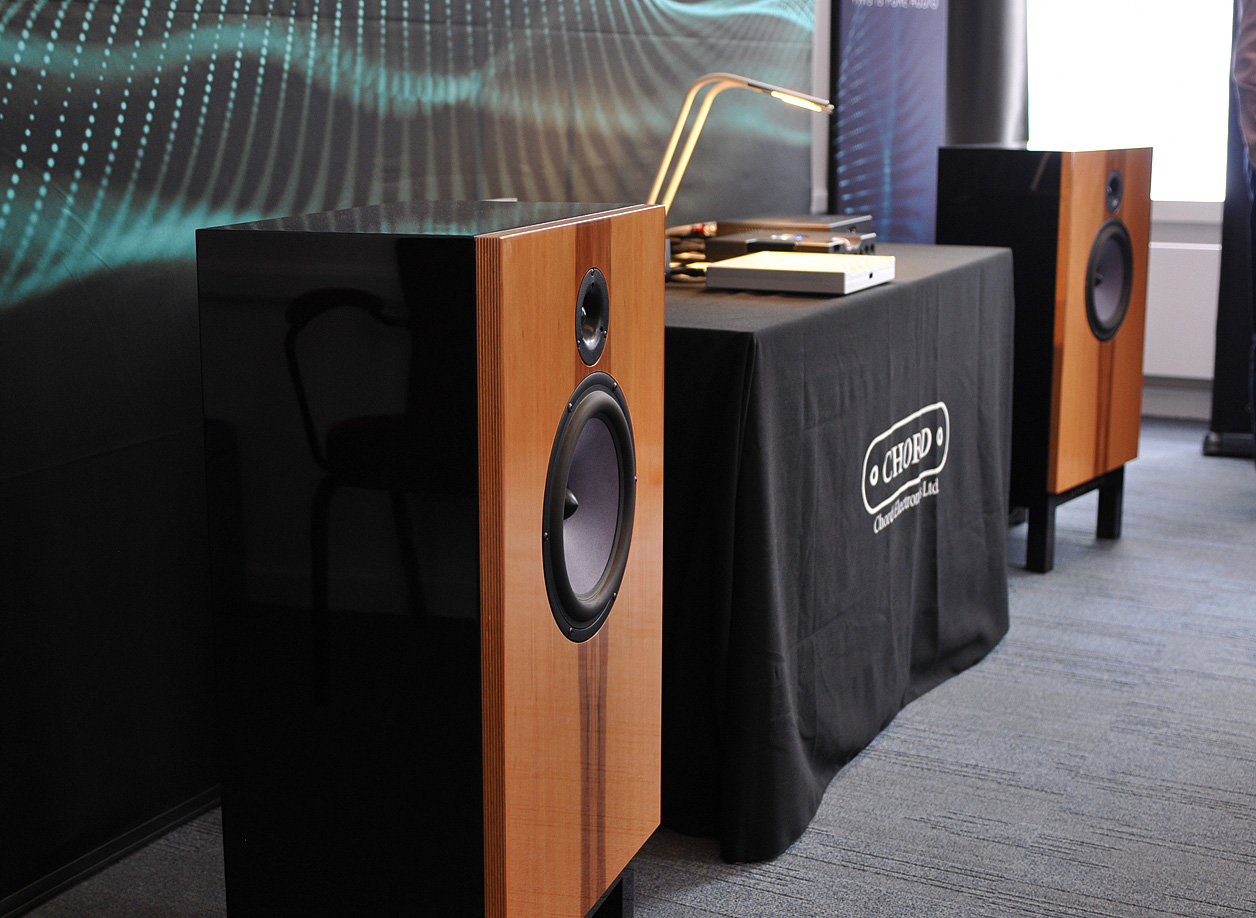 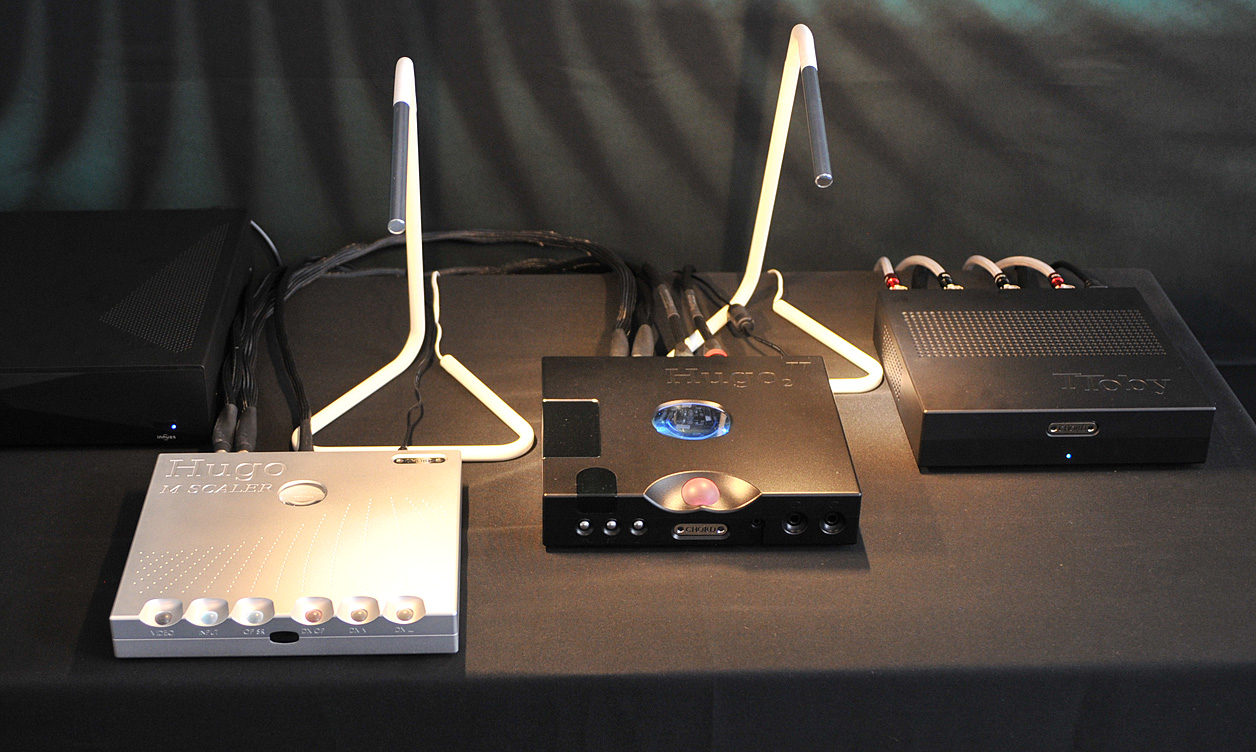 A nice demonstration was that of the John Watkinson Legend Precision Sound Reproducers. This loudspeaker is a 360° omni that claims to be phase linear and its 3-way design is focussed on being free of transient distortion. To demonstrate that, the presenter, amongst other pieces, played a track with just a snare drum. While that track played at a realistic level, he stood up and walked over to the actual snare drum. You already guessed it – the only difference was the exact placement in the room but not the sound or character. Impressive to say the least. Another demo was with a tiny bell. Same effect, same score. More hides beneath this speaker's cloth exterior than meets the eye!

Grimm Audio was another room one just had to visit. Our eye catcher was a dress laced with balanced cables. We missed the performance of cellist Maya Fridman earlier that day wearing said dress while playing. New this year and a premier for the show was the MU1 music source. Input can be via AES/EBU, S/PDIF, optical and of course Ethernet. Tidal, Qobuz and Primephonic (great for classical!) are no problem. Neither is being Roon ready nor is surround sound up to 6 channels nor any sample rate currently active. Just connect the MU1 to a DAC or, if you're all Grimm, directly to their LS1 loudspeaker. Under the cover sit the heart of the MU1, a custom-coded FPGA which is commissioned to do all the format conversion work. Of course all clocks are the signature Grimm ultra-precision low jitter types. 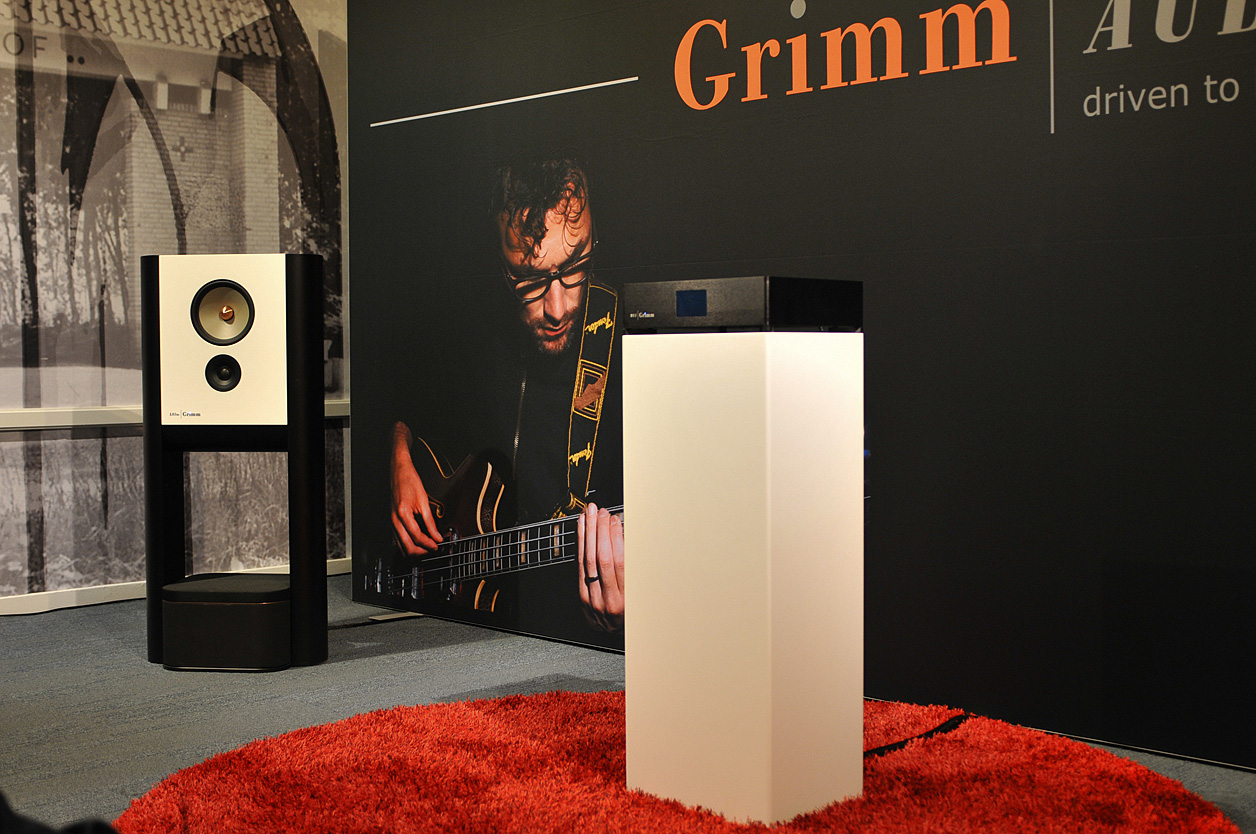 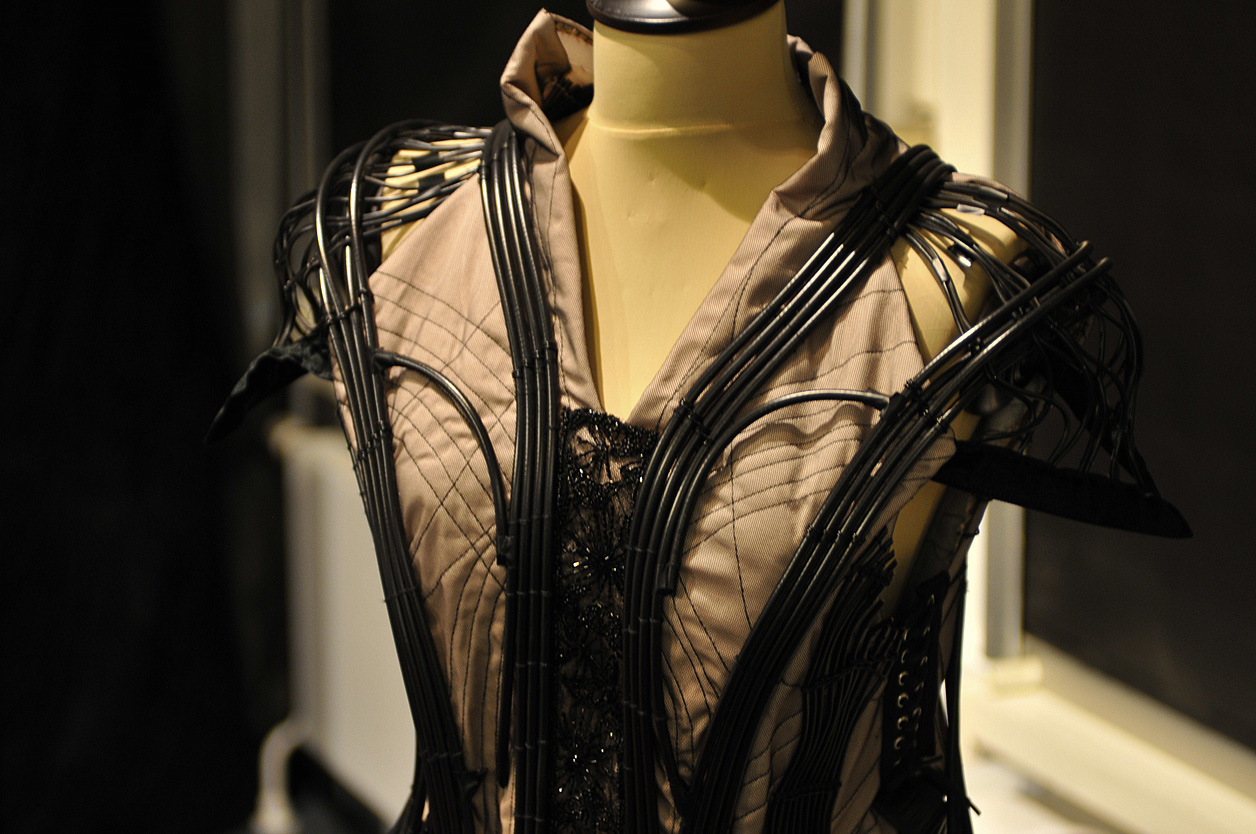 Another Dutch product to be proud of was Rik Stoet's Takumi turntable. Priced at €795 for a complete table with arm, MM cartridge and dust cover, it only had to perform. And the Takumi did just that into Cube Audio Magnus speakers. We expect a review sample soon. 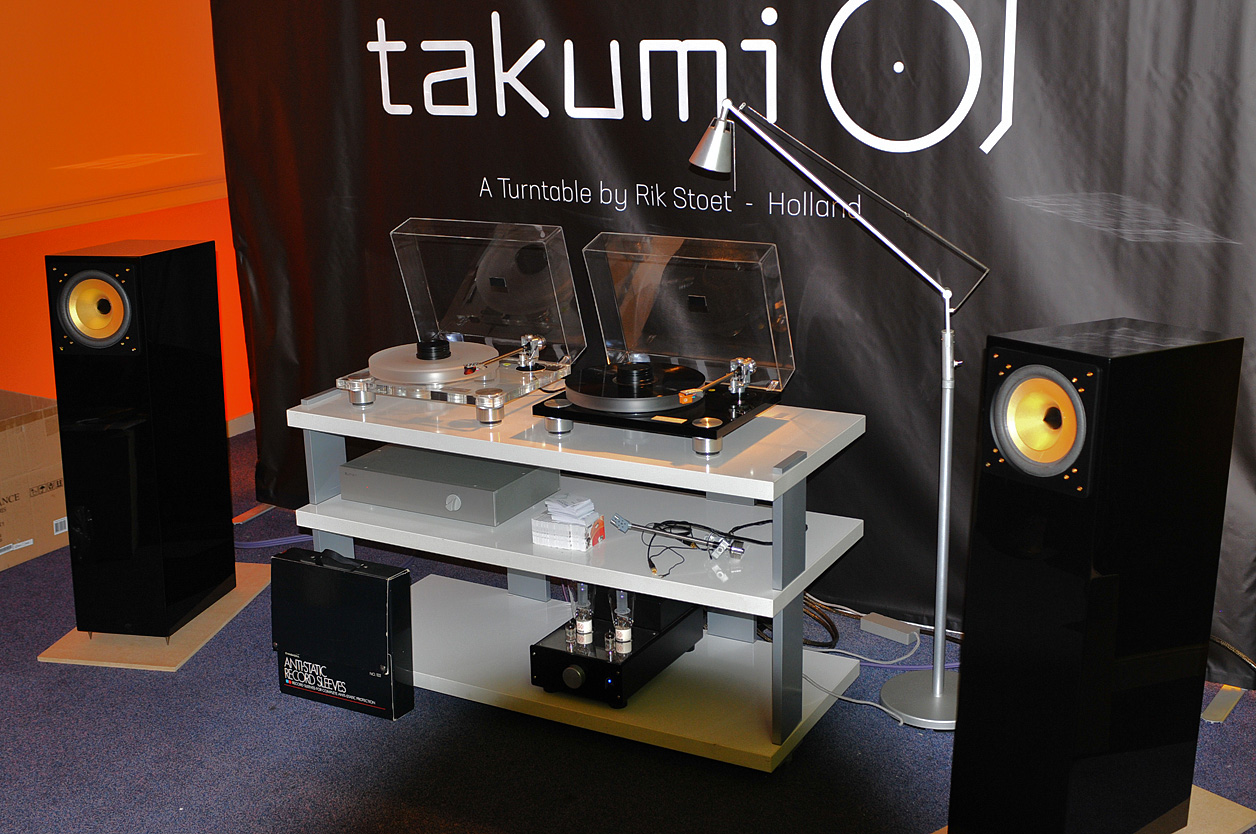