Around each bend of the Stadium floors one could find something nice like here an overview of various turntables. A man explained patiently how to set up a turntable. 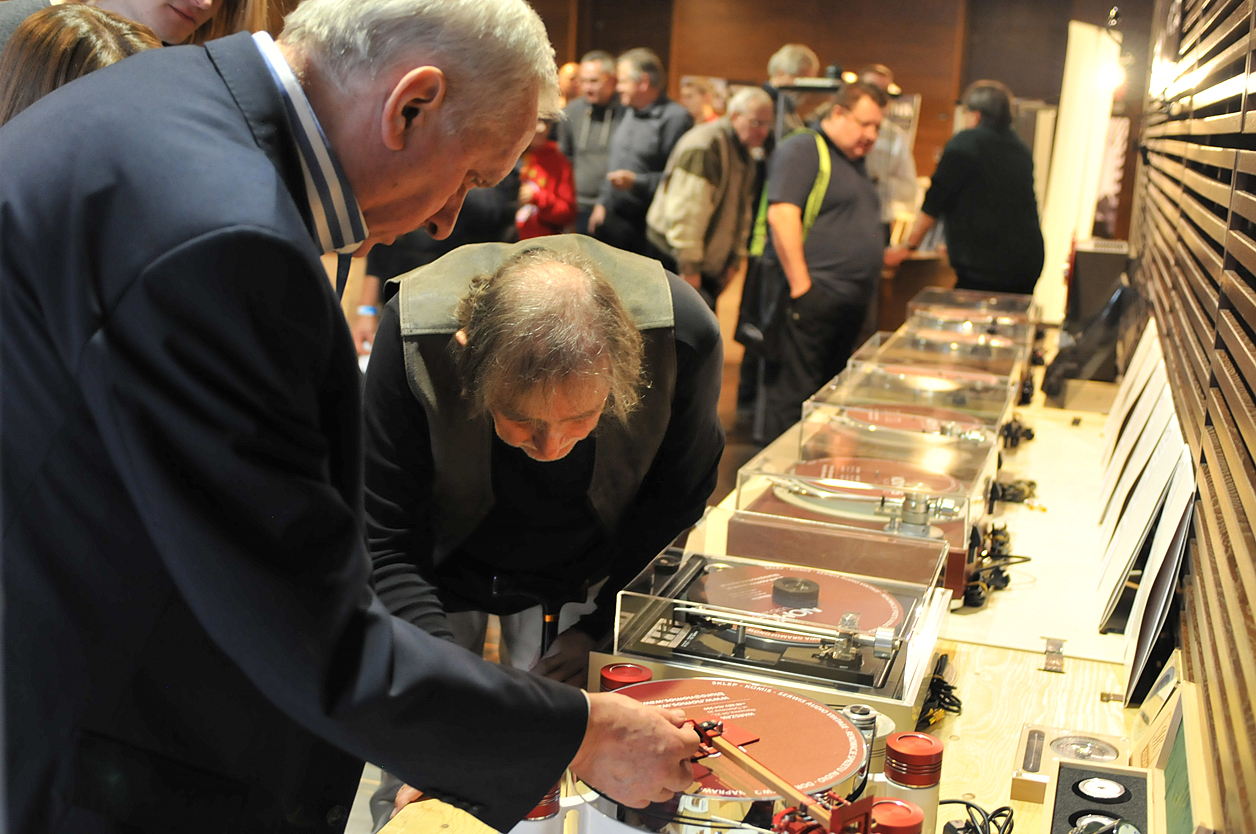 The Mag Lev turntable uses a strong magnetic field to levitate its platter, keep it centered and rotate it stably at 33 or 45 rpm. That was cool! However, a strong magnetic field in the vicinity of a highly sensitive cartridge? Could that work? Apparently so. We use a Furutech DeMag, a UFO shaped device designed to demagnetize LP and enhance their sound quality which does work. We're very curious how this principle compares to a Mag Lev'd LP. 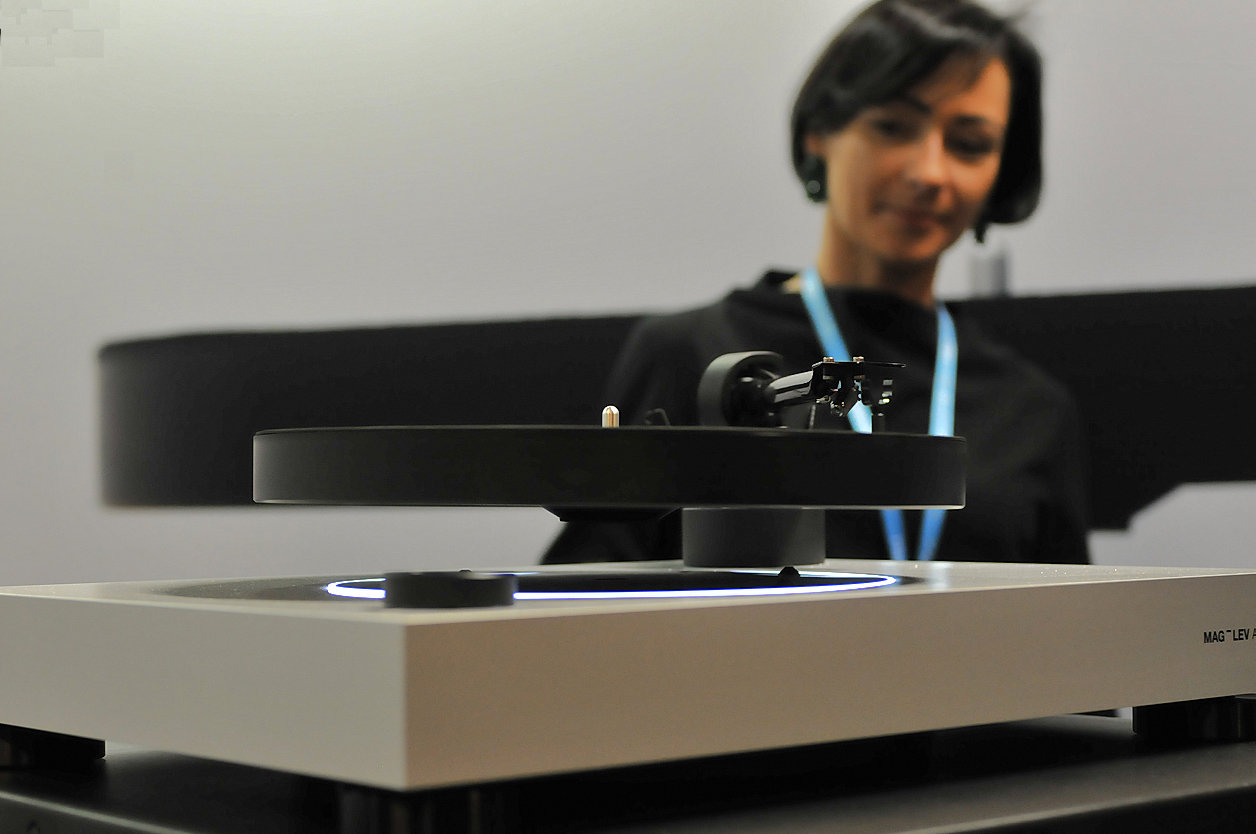 Over at the Golden Tulip, the third venue of the immense Warsaw show, the first room we visited centered on the Fink Team Borg loudspeakers. Electronics came from Bulgaria's Thrax by way of their Dionysos preamplifier and Teres tube/FET hybrid monos. Digital came from a CEC CD 5 player while analog relied on an Airforce V turntable sporting two arms, one Acoustical Systems Aquilar with Suzaku cartridge, one SME M2R fitted with the mono Miyajima Spirit. Kuzma's new Stabi R with matching 4Point arm and DS Audio W2 cartridge was the second turntable in use. Karl-Heinz Fink designed his 2-way speaker around a 10.25" mid/bass driver and AMT tweeter. His stated goal was a loudspeaker that is easily placed in a normal room. Rated at 87dB sensitivity, it wants some input voltage but then cover 41Hz to 30kHz at -6dB. What the speakers lack in true deep bass was made up by the responsiveness and clarity of the AMT from 1'600Hz upward. To ease placement, the Borg had a set of four presets on its back panel. Depending on the room, adjustments change the damping, midrange up/down, presence up/down and HF up/down values. Damping helps match the speaker to solid-state or tube amps for best control. Operating the mid control enables the user to position the virtual stage closer or farther away. Adjustments made by this selector apply to the 200Hz-2kHz range and can also deal with the effects of a lively or more damped room. Adjustments in the 1kHz-5kHz affect the subjective attack and compensate for the bright/dull polarity. The treble adjustments are obvious. Summing up, the Borg sports DSP room correction without DSP. Ears and hands will do this job. 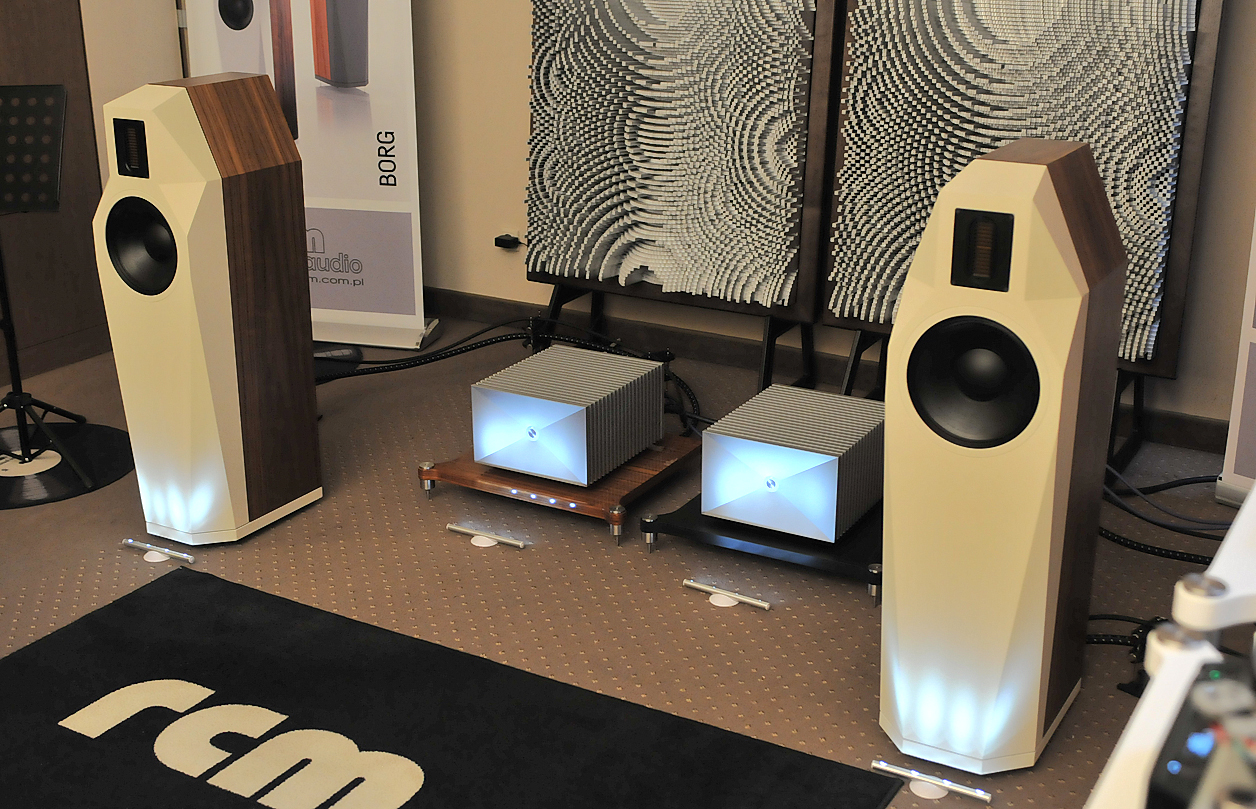 Once again Sveda joined forces with LampizatOr. The red 2-way monitors were the 2018 versions of the active Blipo while the active subs were called Chupacabra to commission a turtle and mythical creature to move air. All three tubed devices on the cascading equipment rack showed different finish samples for the Lampizator Pacific DAC, here ranging from bright red or matte black lacquer to gold plating. At the bottom sat the real source, LampizatOr's SuperKomputer with a Linux OS that can output up to DSD 512. Of course the SuperKomputer is Roon-ready to play music from virtually any source. Sveda Audio's Arek promised to to send us a review speaker sample in the new year (him and LampizatOr's Lukasz in the insert). 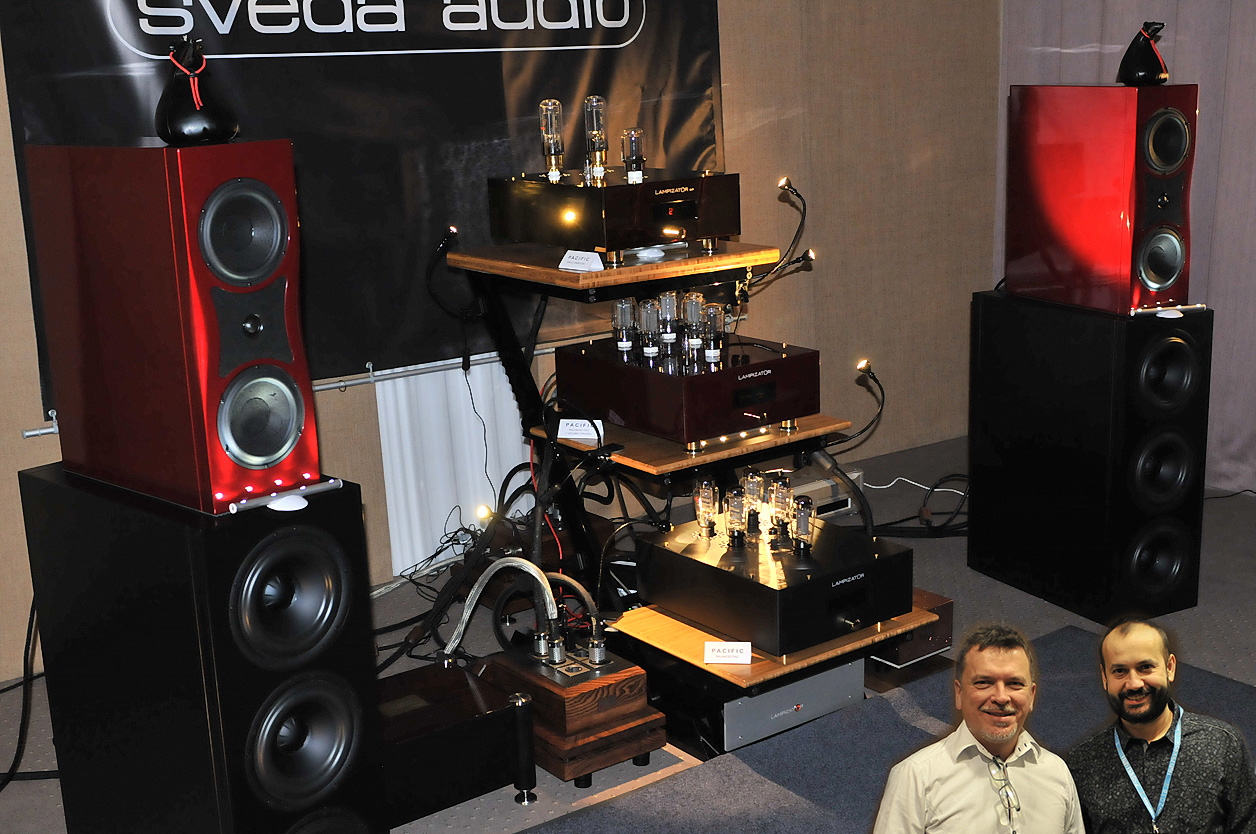 Each year the next room holds a surprise we are curious about. The main ingredients are always tubes and analog. Tubes come mostly from Jadis and this year that was no different with a JP MC Anniversary preamp and SE845 monos. Source was an impressive Studer A80. These rock-solid tape machines were produced from 1970 to 1988 and with some TLC will last more than one life time. Their playback is outstanding so the only difficult part is to get actual tapes. The Destination Audio Nika hand-delivered by designer Sam Wisniewski (inset) were the surprises this year. Nika, named after Sam's daughter, was a 3-way horn system covering 25Hz to 20kHz  rated at 99dB sensitivity. Though still not the smallest or the lightest at 115kg each, they were a bit more practical than the 245kg 184cm tall and 109cm wide Vista model. This was another 'reset and recharge room' which respected the natural sound of music rather than become a sacrifice to the delusions of the day. 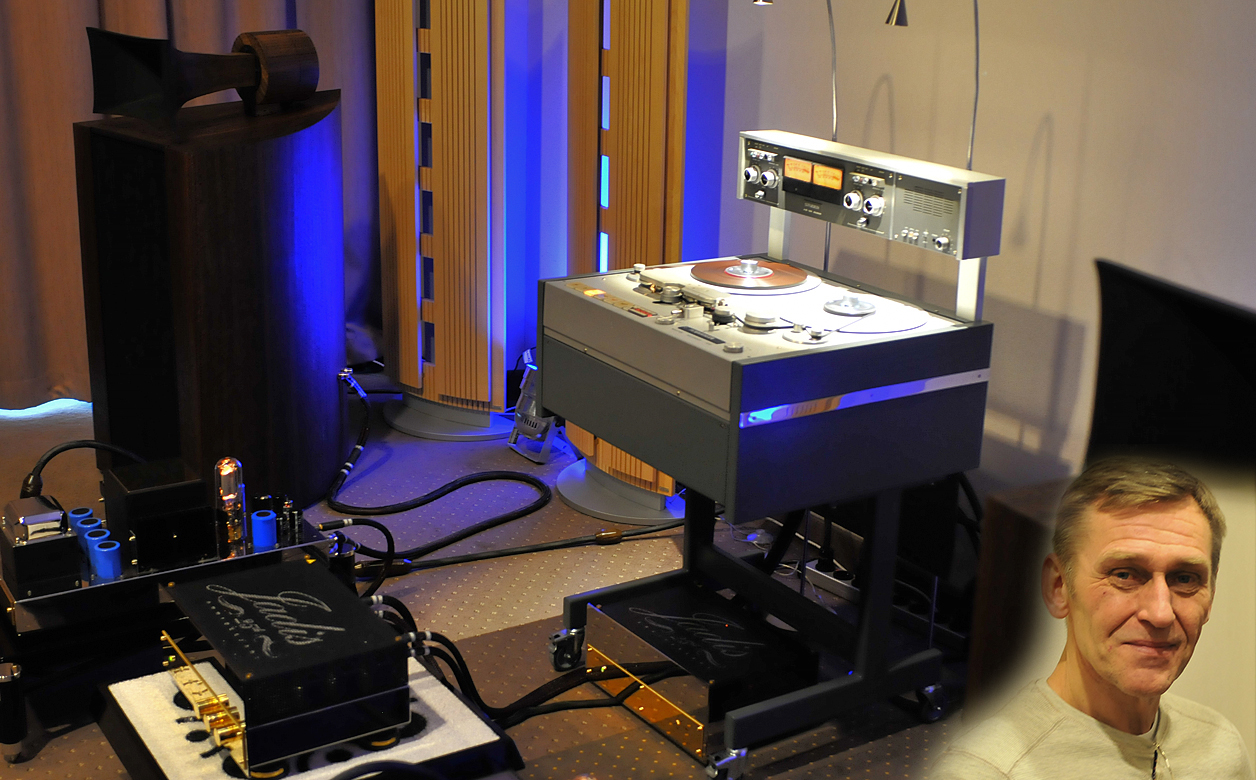 Ayon pack big each year but with one show day less for their Golden Tulip room this year refrained from elaborate room treatments. Last year there was a complete acoustical tent above the audience. Now there was a plain room filled to capacity with listeners doubling as makeshift acoustical treatments. Gerhard Hirt of Ayon presented his CD35 digital source, Spheris preamp and Vulcan monos. Vinyl spun off a Transrotor FMD Tourbilion. Loudspeaker were the 3-way 6-driver 93.5dB efficient Ayon BlackCrane, a full ceramic cone system that didn't sound like ceramic drivers at all. Ayon paid a lot of attention to their crossovers which include a selector for solid-state or tube amplifiers. This was a big system with a very intimate sound in a big room. 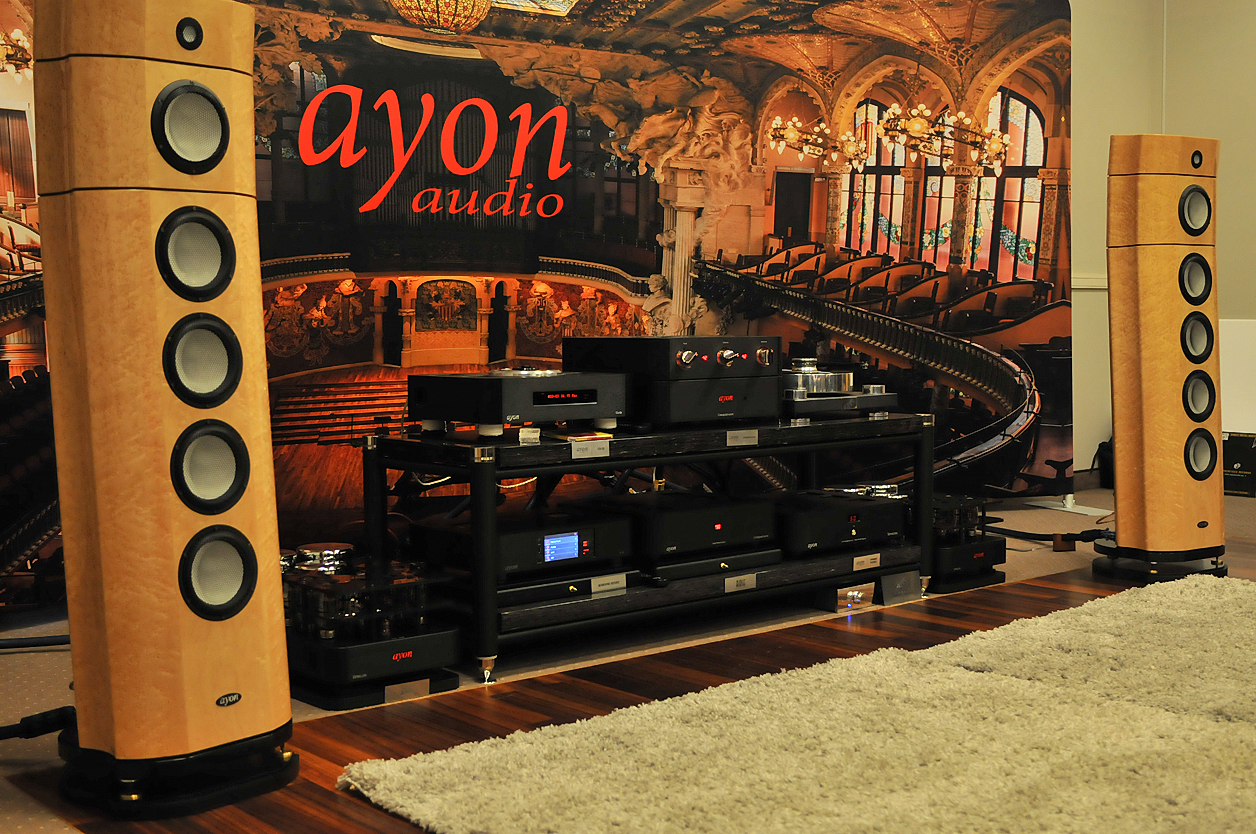 Another big room but now with a small system came from Boenicke. Accuphase of Japan supplied their A-250 monos while Ayon's S-10 network player with tubes was the source, DAC and preamp. Sven's W-13 flagships angled in at a fairly steep toe-in had no problem filling the room with clean yet warm sound. Don't let their small footprint put you on the wrong foot. Especially the bass section is more elaborate than expected. Twin 13" woofers on each cheek are powered by 250w Class D amps with DSP to match or counter a room's tendencies. The 6" midrange sports a wooden cone without high-pass filter. For tweeter duty a 3" custom made widebander combines with an ambient tweeter at the rear. 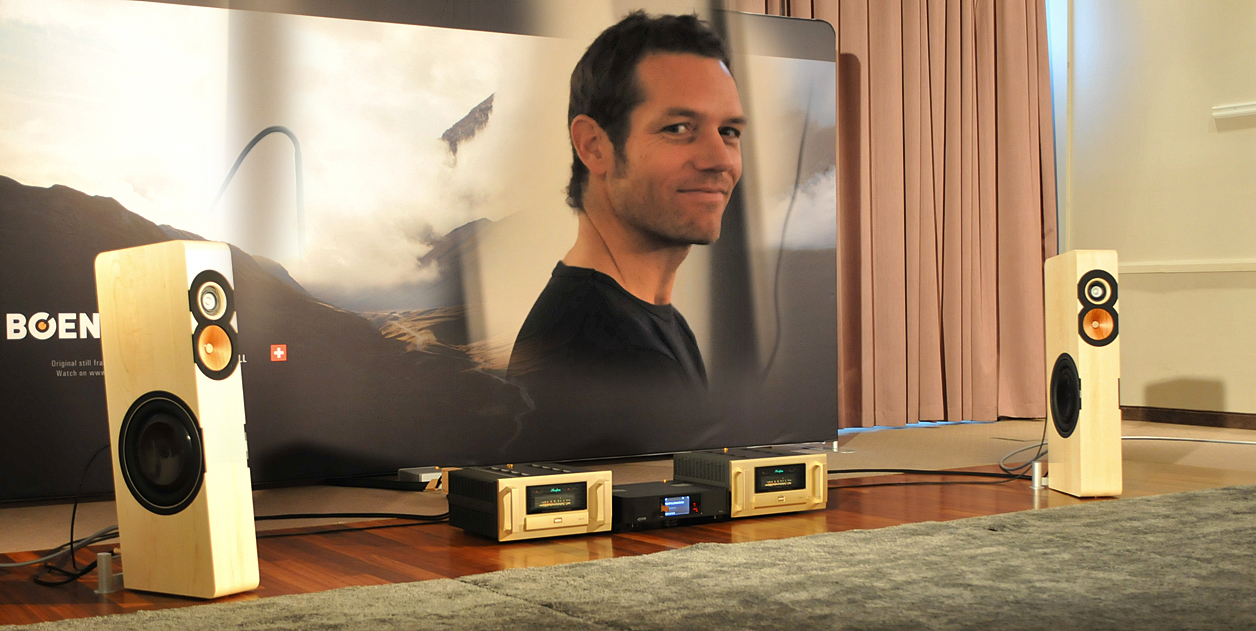 We looked forward to the next room for a long time. Last year the tall Soulsonic dipoles stole our hearts and had tears in our eyes. Would that emotional roller coaster reset? Last year their room was in the National Stadium. This year they had secured a larger room at the Golden Tulip. Upon entering we noticed a difference right away. Yes, there still was the pair of Soulsonic Hologramm-X, the 95dB sensitive 3-ways with 221cm tall ribbon tweeter, 12" midrange driver and four 15" woofers arranged in a curve on a open glass baffle. But there was also a change because Audio Tekne tube gear had replaced last year's MSB Technology M204 monos. That change Soulsonic's Miro Krajnc had to comply with to accommodate his distributor's portfolia. But it took a hit on the emotional content of the music played. The sound was more reluctant, less sparkling and daring. Where next to last year's emotions the virtual image had been rich in depth and height cues, the image now was smaller and less detached from the sources. The sound was still good but less special (Miro and his wife in insert). 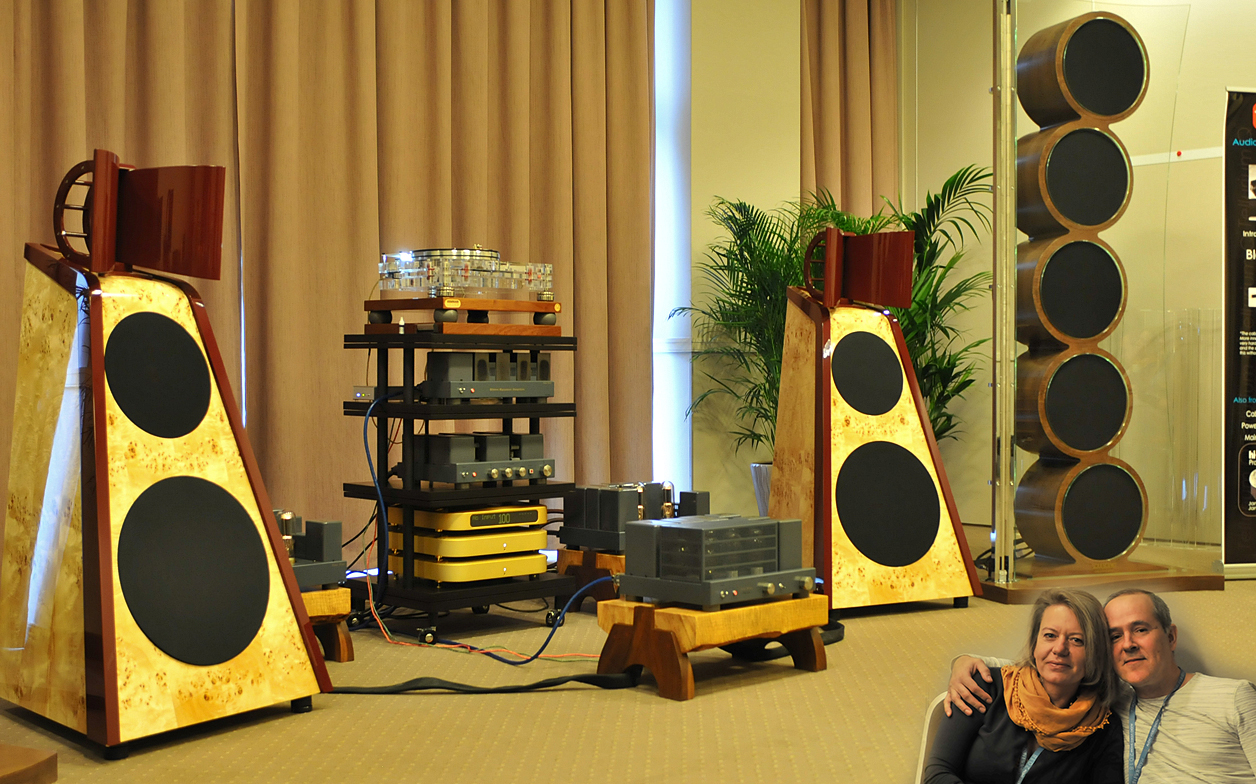 German manufacturer Gauder presented for the first time in Poland their Darc 100 loudspeakers with ceramic Accuton drivers plus their diamond tweeter. Vitus Audio supplied the integrated amp. Another show novelty was the TechDAS AirForce III turntable. 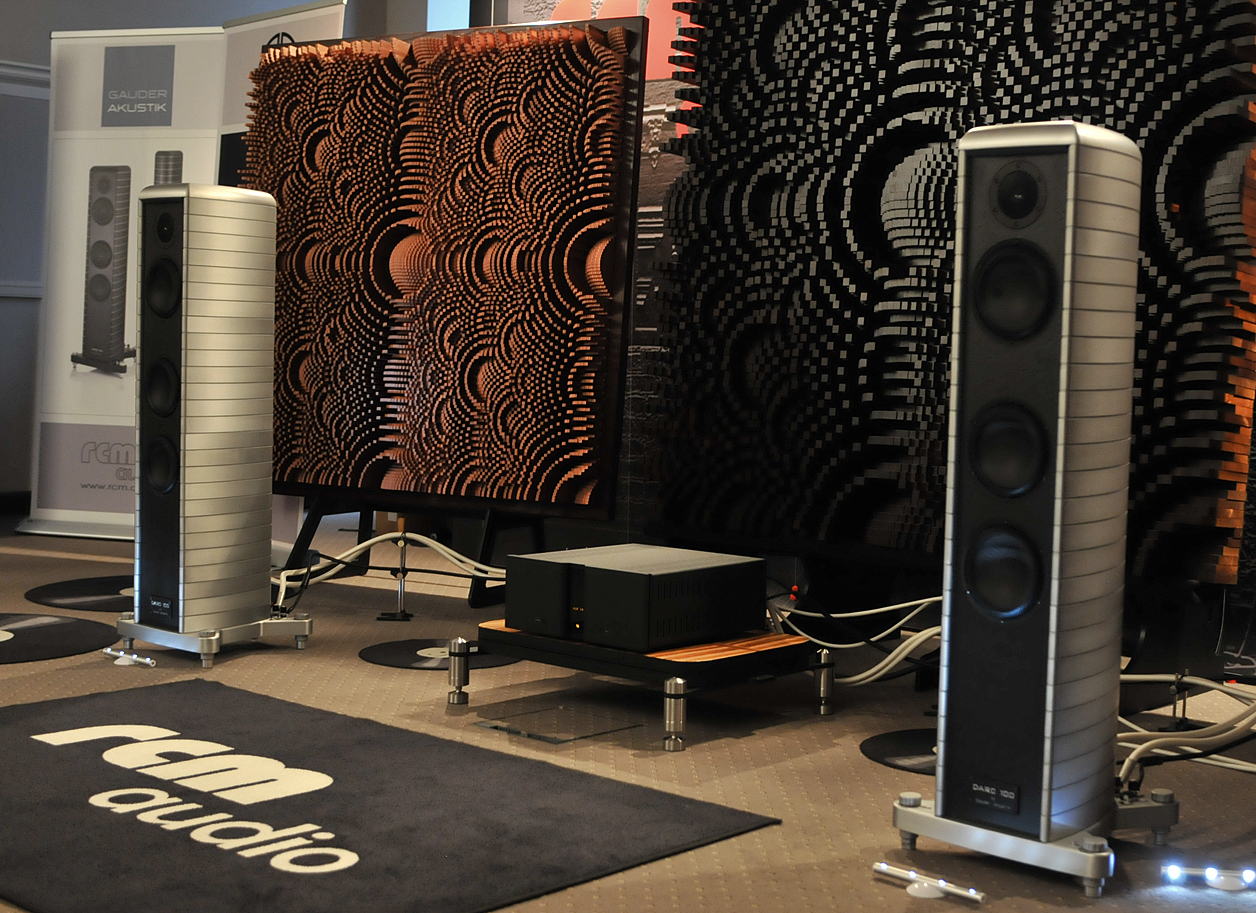 To conclude our commentary on 2018's Warsaw Audio Show, we first of all thank and congratulate Adam for inviting us and for providing a smooth-running event which caters to a wide range of exhibitors and visitors alike. Warsaw is now the number one consumer show in Europe and probably all of the West. We even met Marjorie Baumert of Rocky Mountain Audio Fest fame. She came to learn from Adam and that was a good sign. Cooperation in this market is vital for all participants. We met other old friends and made some new one. Some of the old friends are hotel staff, others members of the industry. 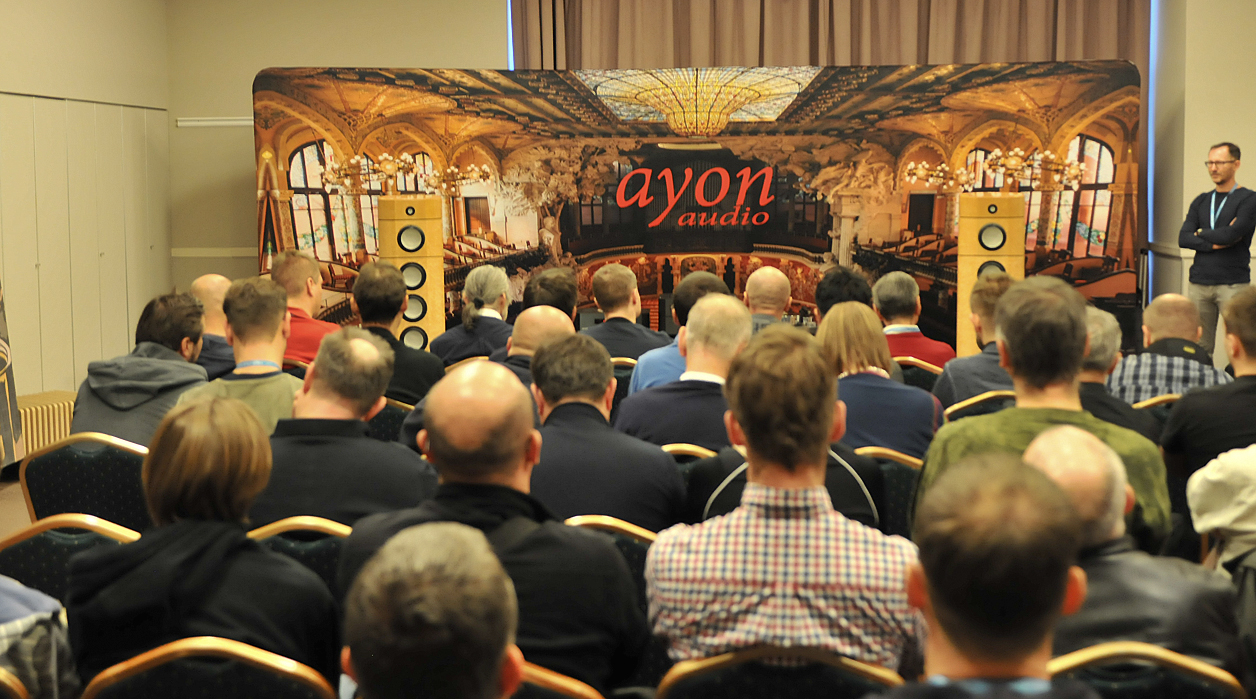 Some trends we noted were that vinyl is here to stay and that still new brands enter this hip-again sector. Big names occupy more floor space each year but with Adam's unique approach, these big names with their bigger budgets indirectly finance the smaller brands and names, allowing them to participate and get the attention they deserve. 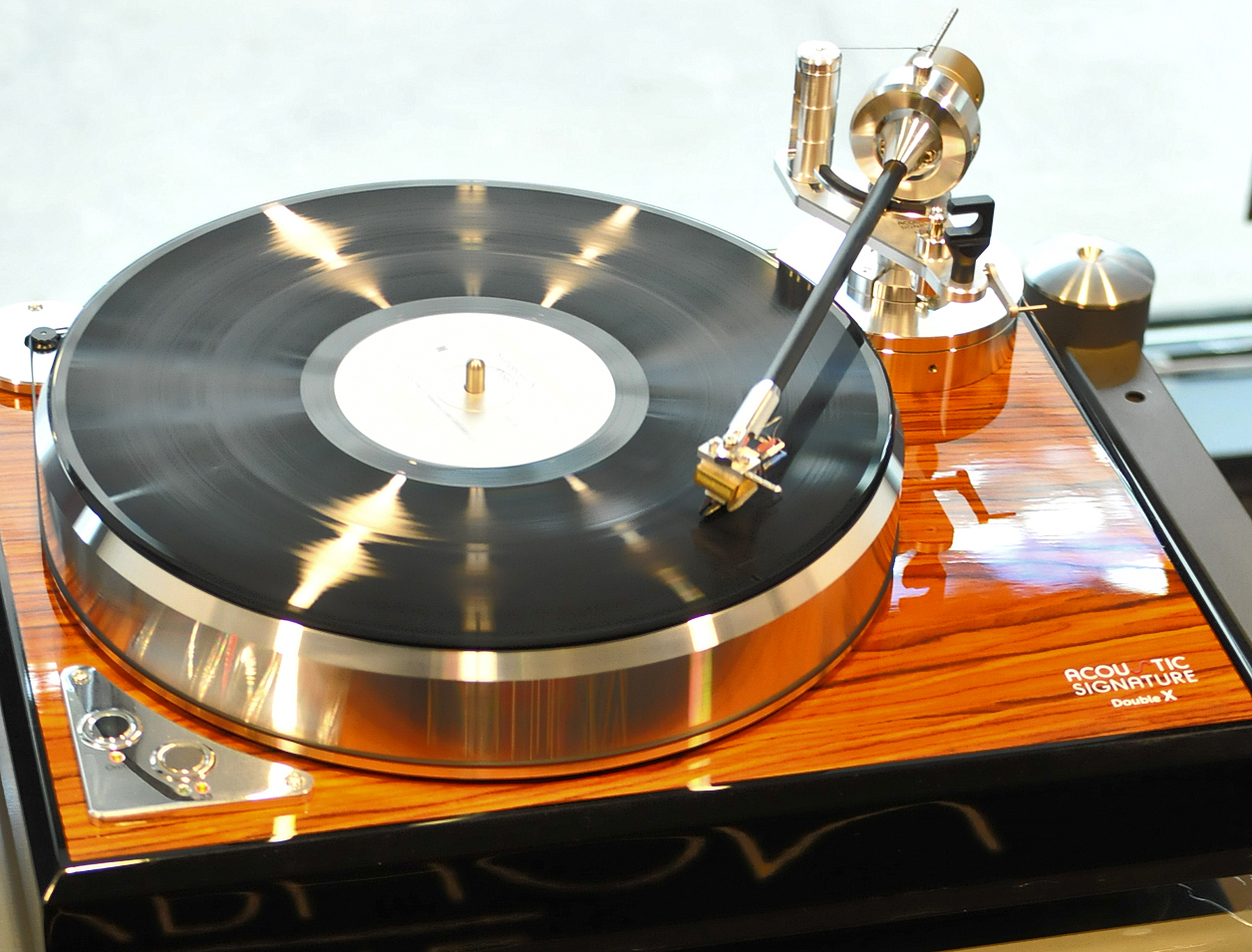 Other trends we noticed concerned the music played. Hugh Masekela was fortunately only heard once while Leonard Cohen played extensively and with a wide variety of songs. Lucy in the Sky with Diamonds was a popular track now by Katie Melua. Nostalgia also caught our attention. Many brands revisited yesteryear designs like JBL and Yamaha. Are vinyl and its rites not also part of this? 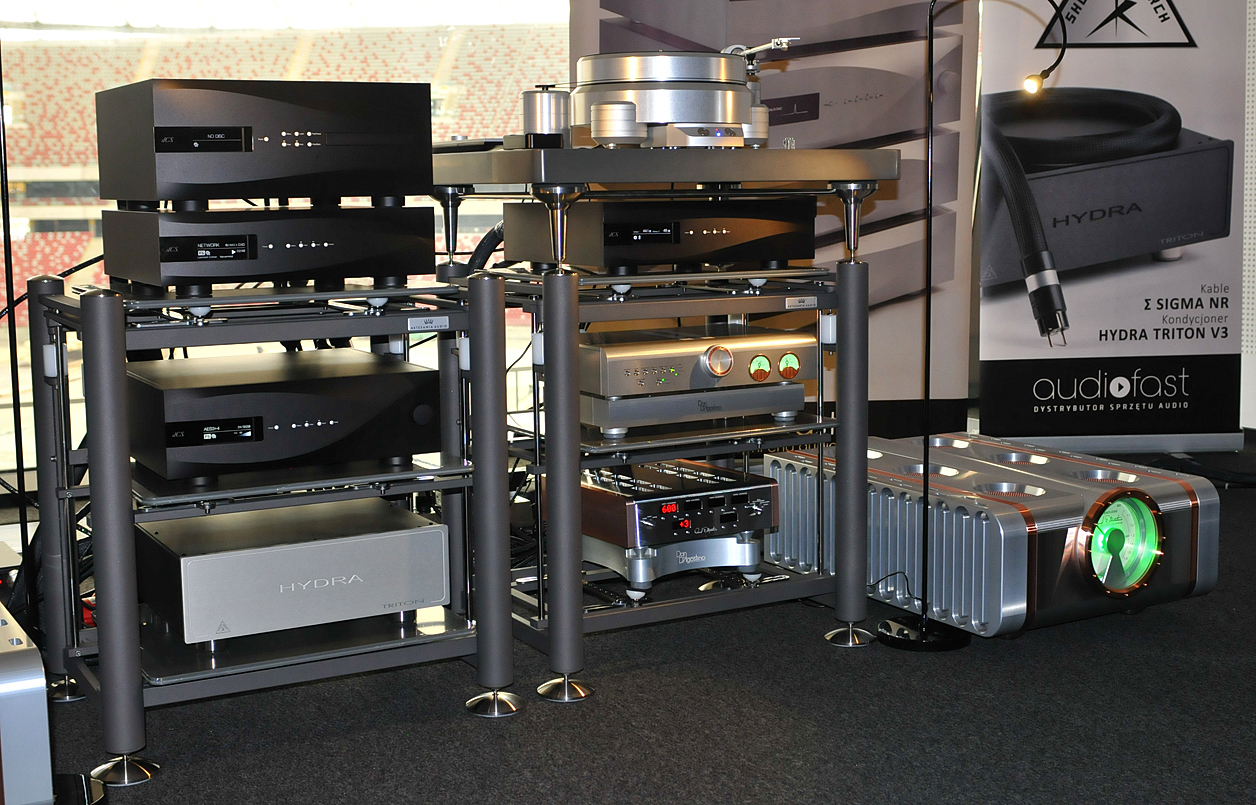 A successful show of course has to come with some downsides. Closed-room demos caused huge lines in the Stadium but also proved the popularity of their brands. The sheer amount of rooms and limited show hours combined with personal stamina meant that choices had to be made on who to see and what to walk right on by. Focus on the Stadium with its bigger brand names and more consumer-oriented gear? Do just the two hotels with their more audiophile/gourmet offerings? That's a tough decision. But bottom line, it again was a great show in all respects!