Block Audio are a Czech company who demonstrated their Mono Block power amps with the Line & Power Block preamp. Another Block was the Shelf Block monitor and yes, the Cub Block power distributor. That surprised us. Cub? The monitors sport a never less than 40mm thick baffle for a 6" woofer and 1.5" tweeter. At the back's top sits the port of this bass reflex design. This 21 x 34 x 40cm monitor weighs a hefty 29kg. In the heavy department too were the amps. At 90kg/ea., these class A monos pump out 200 watts before class AB operation scales to 500 watts. Frequency response is DC to 300kHz. With such high class A power, mere idling will cause your flow meter to mark overtime (500w). Fortunately the designers built in eco mode to lower consumption to 50w. The preamp runs one large battery per channel to last 15 hours when fully charged. The control circuit doubles as guardian for the power amps and monitors their temperature and other specs. Signal-to-noise ratio for the line stage is said to be better than 128dB while channel separation exceeds 130dB. Inputs are balanced XLR and unbalanced RCA just like the outputs. Together the weight of the two-chassis preamp is 28kg. We liked what we heard and the choice of monitor speakers matched the room's size while being far from shy on SPL. 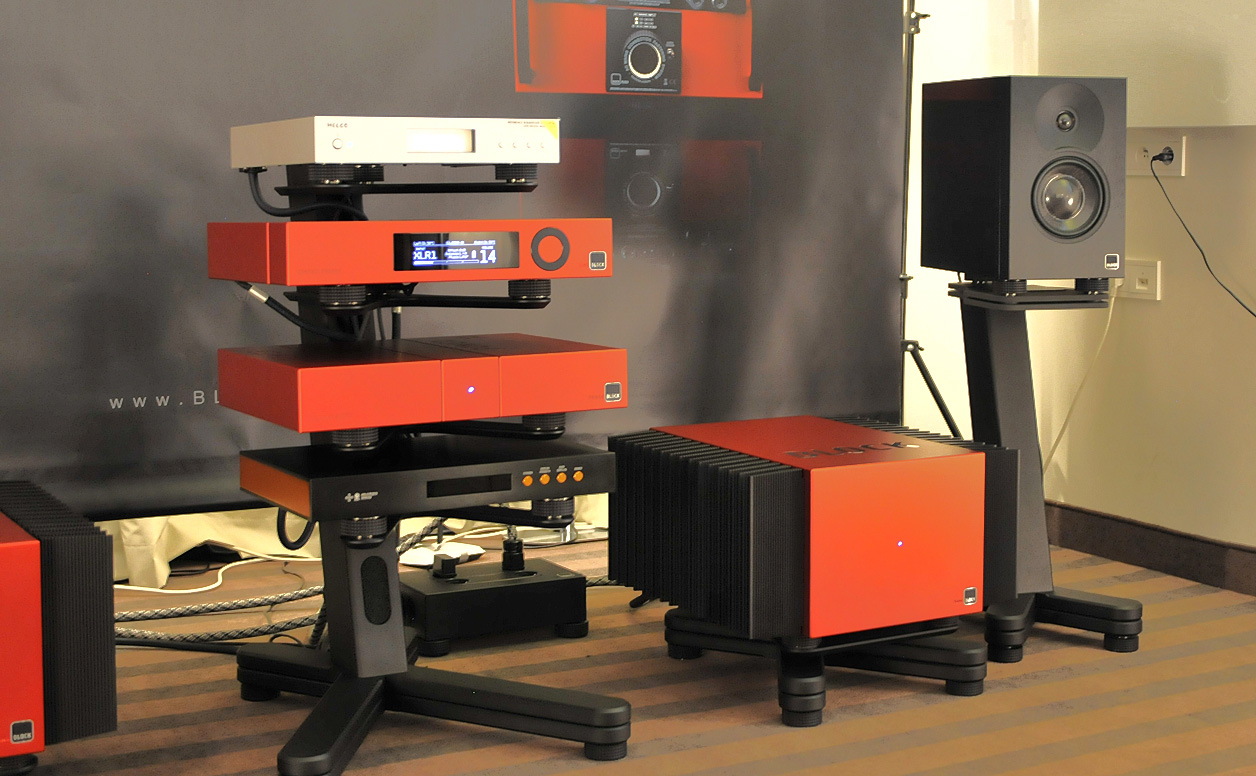 Gradient's Model 1.4 is a two-box 3-way loudspeaker with a cylindrical lower part and ball-shaped upper. The latter houses a 176mm coaxial drive unit with 25mm alloy tweeter. Bass down to 45Hz is handled by a 220mm woofer that's down 6dB at 27Hz. Sensitivity for this Finnish speaker is 87dB. Italian Norma handled amplification with their Revo PA150 150wpc power amp. Preamplification after the Lumin X1 streamer was handled by Norma's Revo SC-2 LN. On the second shelf of the audio rack sat a Fidata HFAS1-XS20U with 2TB of SSD storage. In fact it uses 4 separate SSD drives clustered as so-called stripe sets also called Raid 0. This configuration offers faster data access and smoothes out the power consumption. 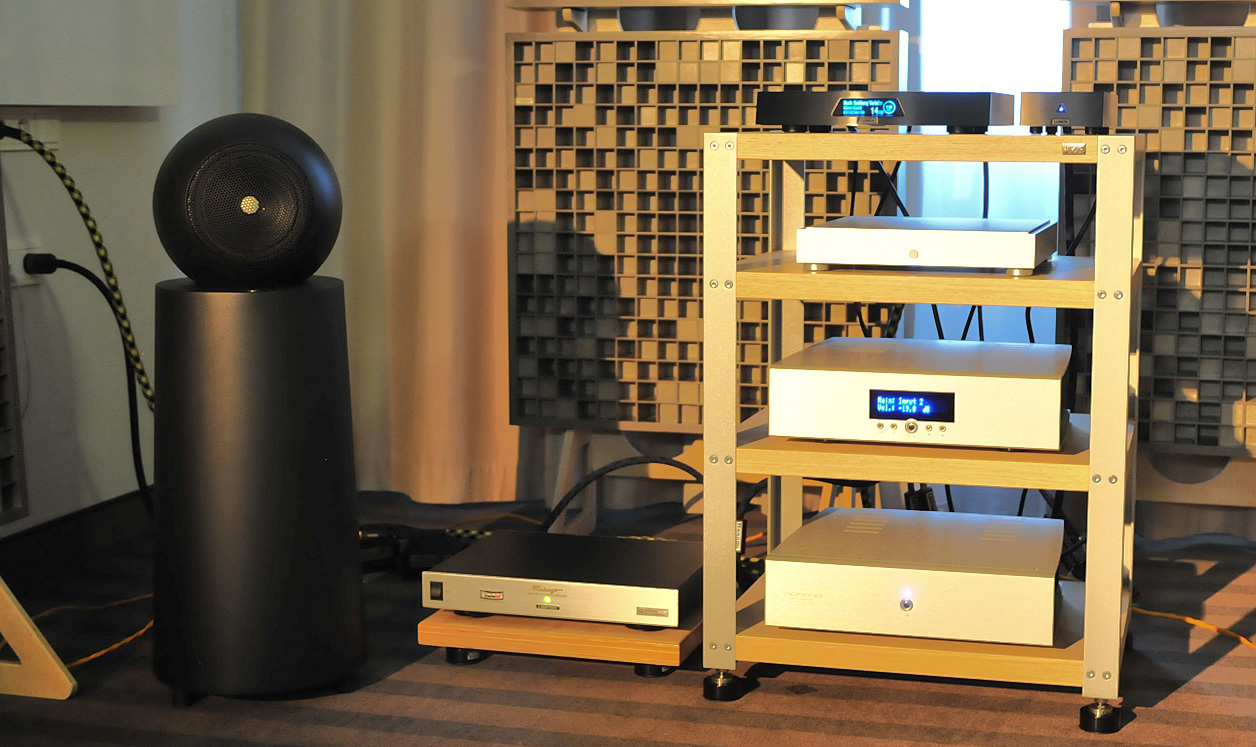 We stayed with a clustered setup in the Polski Klaster Audio room where a group of Polish manufacturers teamed up to promote their home-grown products in force. Egg Shell, Audiomica and Ciarry were the brands for their two rooms. Ciarry design and build dipole speakers. Their KG-5040 is a 91dB 5-driver 4-way measuring 126 x 45 x 18cm. Bandwidth is rated to at least 29Hz. For a smaller loudspeaker, they had the model KG-4030, an 89dB 4-driver 3-way with bass down to 39Hz. Dimensions were 103 x 40 x 17cm. Amplification was by Egg Shell with their signature V-twin orientation for the valves. We could find no information on the smaller monos however. 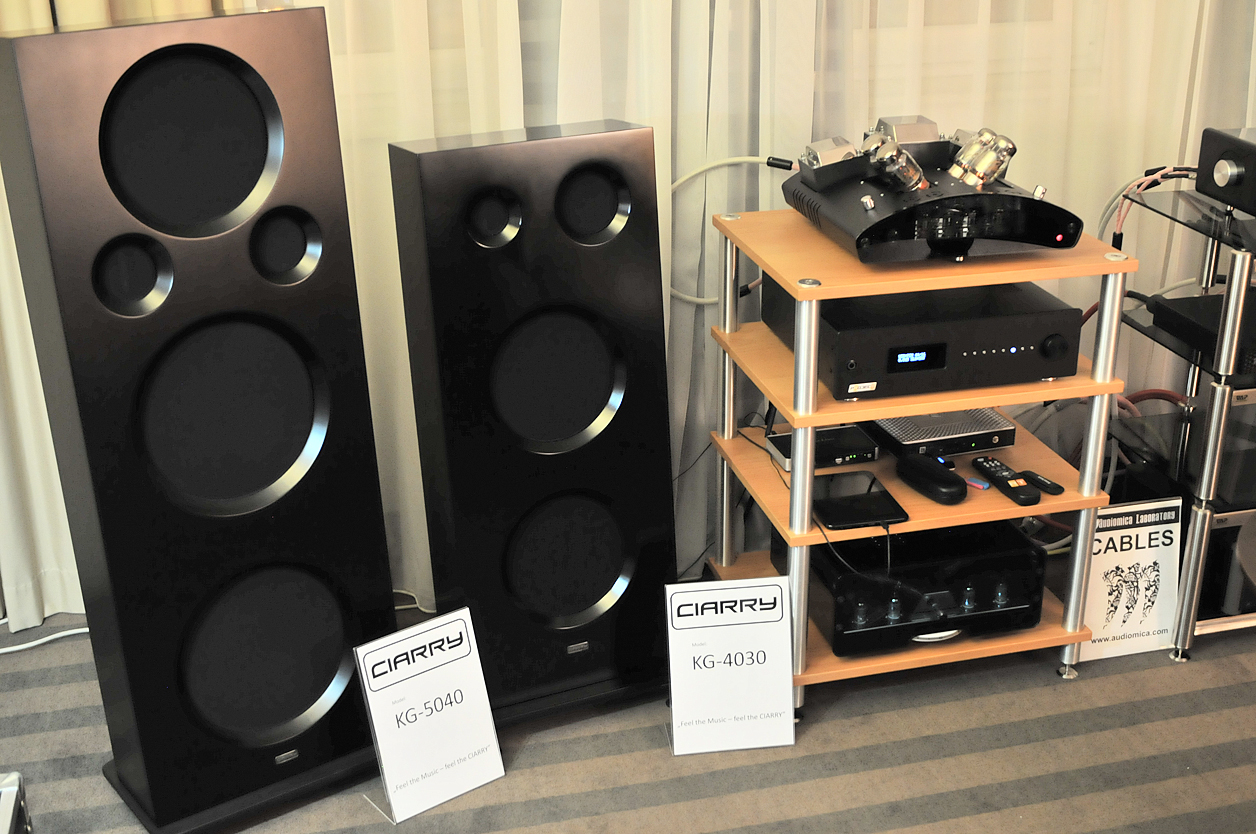 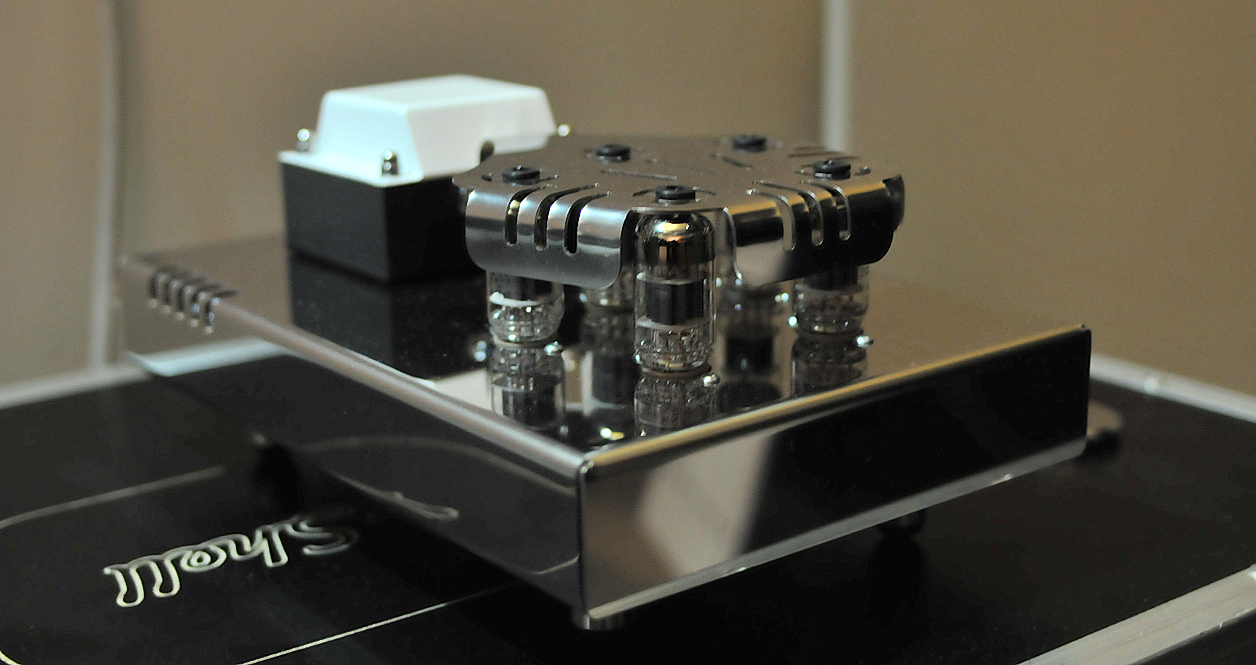 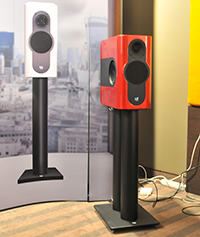 Were they Dutch or were they German?

That was the question with Kii but we took them for being Dutch. They cater to the pro market with a fully active monitor but also appeal to us consumers. Their 6-driver design combines DSP with A/D and D/A conversion plus six channels of nCore class D amplification.

As demonstrated, neither placement nor room shape were a limit for good sound. The DSP capabilities coped with it all and the outcome was a sound that challenged any ear-eye synchronization as being very much associated with far bigger systems.

We continued on to another proof that size matters. No, not bigger is better but small is beautiful. Sparkler Audio are Japanese and the brain child of one Kazutoshi Tsukahara. After his life at electronics giant Sony where he was software developer for their digital media branch, he wanted to do something different. As an admirer of Junji Kimura of 47 Labs and Noburu Tominari of Dynavector, he knew just what that would be. The result is a complete line of small  high-quality audio gear from his own workshop. On top of his rack sat the Model S507t with Notebook II, a two-box CD transport where the power supply sits in a second box. Following the 47 Labs tradition, the top-loading transport was of the nudist kind. Below it we saw the Model S505 or Flügel, a 25wpc integrated which can be ordered to run in current or voltage mode. 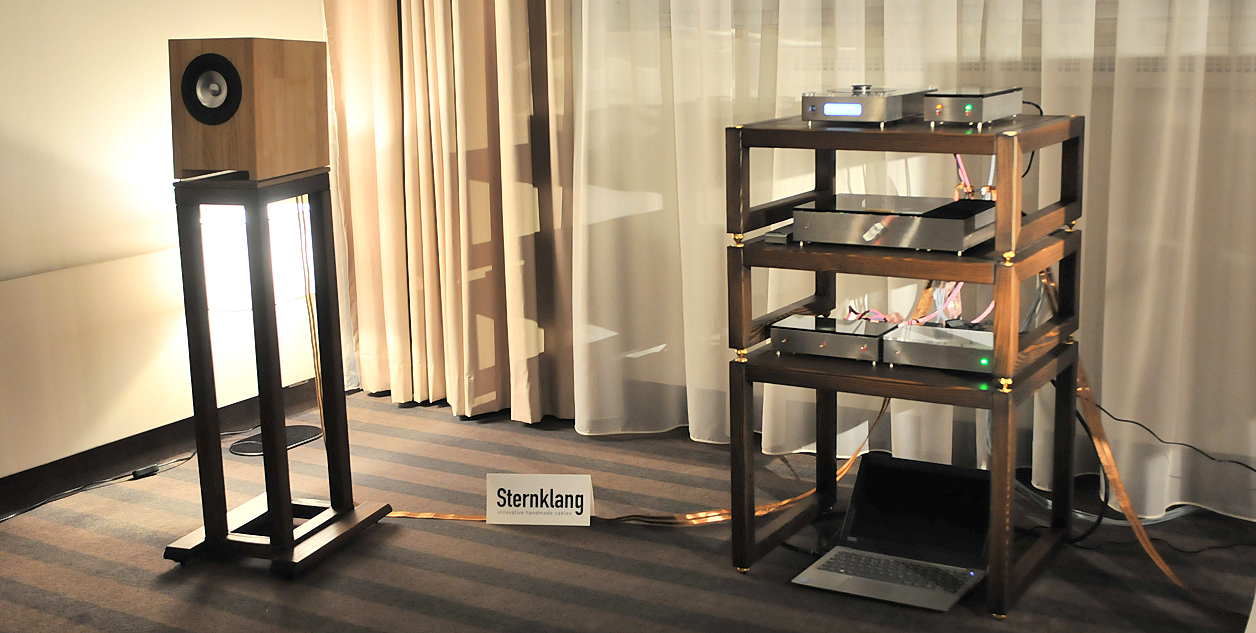 The next shelf below had on its right the S504 16-bit NOS zero-filter Unison DAC whose output can be either voltage or current mode again. At the left of the same shelf was the Model S506 or Switch Girl which can handle three input devices selected by ruthenium reed switch. Switch Girl S506i comes with a voltage-to-current mode conversion option. All interconnect cables were by Sparkler Audio while Sternklang, yet another German-sounding but really Japanese company led by Koji Teramura, connected the integrated amplifier to the stand-mounted Sparkler Model S301B Diva loudspeakers. These tiny tots were made of solid wood. Following the minimalist tendencies of its brethren, the driver was a 10cm widebander. Mounted to an 18 x 25 x 25cm bass reflex box, total weight was just 3.2kg. Rated at 85.8dB, the 25wpc S505 amplifier driving it was sufficient for decent output. It won't rock the room but why should you want to do that? We really liked what we heard and enjoyed distributor Sead Lejlic's explanation [lower left]. 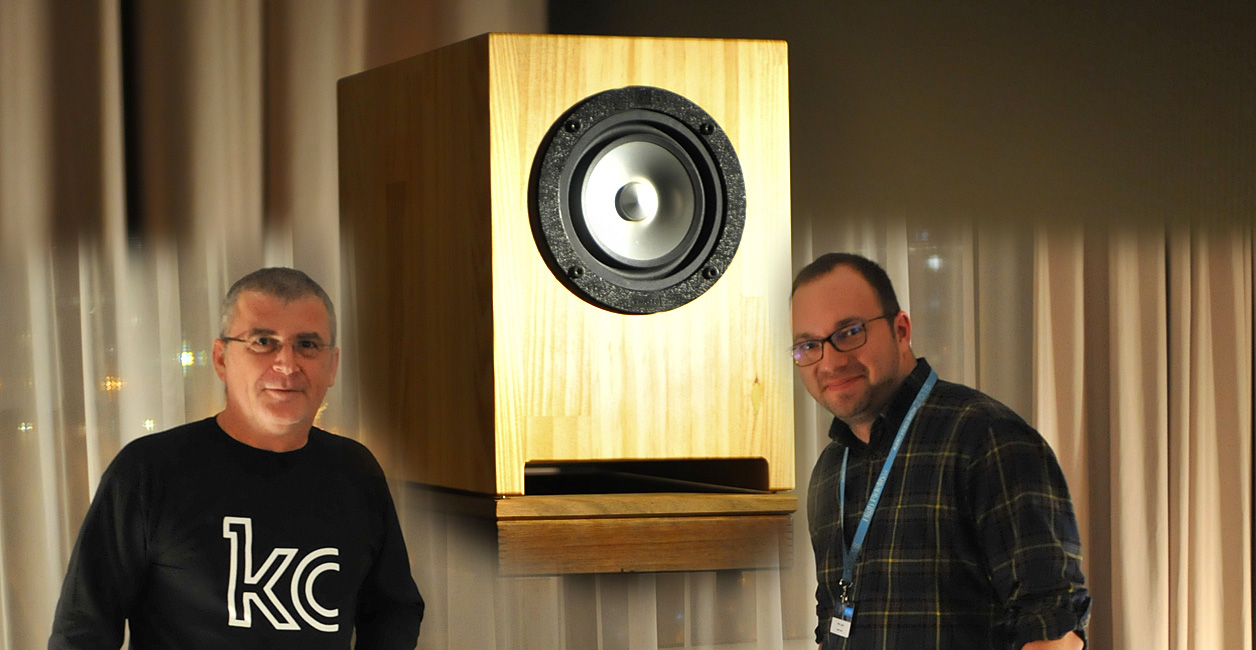 Completely different but with the same aim at high quality was the Absolute Dimension room. This new Finnish company showcased their Hypostatic Indigenum speaker. From a faceted artificial stone cabinet housing an 11" woofer assisted by a passive radiator in the back emerged a slender magnetostatic stalk whose shiny 80cm tall support cage tilted slightly backwards and sported a curved membrane for horizontal dispersion of 60°. Until then we had never heard a magnetostat with a curved membrane and thought that contrary to electrostatic speakers, such construction was too difficult to execute. Now we saw that it is possible and for great results. The crossover between woofer and midrange/tweeter sat at 400Hz and the manufacturer rated the Indigenum at 87dB sensitivity. Again this was a room with a sound that tasted like a lot more. We were struck by its ability to project a large soundstage from a modest size. No doubt this was due to the dispersion geometry plus dipole character of the magnetostatic driver.

Deeptime equaled big time in a small package. They offer a 3-piece audio system printed from sand. Yes, sand – SiO² aka silicon dioxide. Add resin, feed it to an appropriate printer which connects to a computer that in turn provides data from a 3D design program like Dassault's Catia and off you go. In reality it is not quite that simple of course. Most 3D sand printing is actually done to create molds and casts which subsequently yield metal or other parts. It's how the 3D print becomes a negative but the same technique can be used to create the desired positive straight away. Now virtually any shape, even the most intricate, is possible. 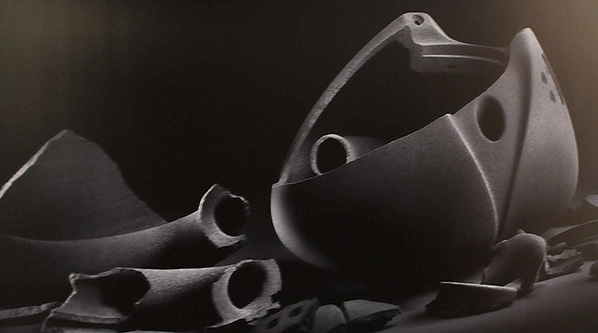 In the Czech Republic, for more than ten years Ond?a Chotovinsky and Martin H?eben had already worked as design engineers. Their specialty was automotive design, vehicle architecture and prototyping cars and other wheeled appliances. Ond?a earned his PhD on autonomous vehicles and Martin labors in the same field. They worked for McLaren and Skoda to name just a few.

Next to automotive where they use 3D design/printing, they also nursed a thing for audio. Some four years ago their skills and passion combined into the first printed loudspeaker made of wood. Ond?a used a variety of computer-aided software to model the Spirula 4.0. Then Martin prepped the files for 3D printing. At that time their printer of choice was a Leapfrog heavily modified by Martin. The printable wood was Timberfill. As the name gave already away, Spirula is of a spiral shape whose origins are the now extinct marine mollusk called ammonite.

By 2018, Ond?a and Martin were still obsessed with audio and printed designs but now with a difference. Instead of printing in Timberfill, they switched to sand. Spirula remains the name of the satellite speaker but now the Thunderstorm subwoofer completes it. Together, the powered 3-piece set is called the Ionic Sound System.

Spirula is rated at 87dB and covers 75Hz to 20kHz with a single 3" bamboo cone. Thunderstorm with its somewhat alien pod shape has three ports that vent its 5.75" downfiring woofer for 40Hz to 200Hz. Next to the driver, Thunderstorm also contains three class D amplifiers; 1 x 110 watt for the woofer, 2 x 60 watt for the satellites. Noteworthy is that Deeptime use three stereo amps in bridge-tied load mode for Spirula and in parallel bridge-tied load for the woofer – configurations quite common in car audio. Ionic comes in a limited edition of 1618 sets and that same number is the length of included loudspeaker cables in millimeters. That figure must be important. Is it the beginning of the 30-year war that started in Prague? The Bohemian Revolt or Kepler's third law of planetary motion? Whatever it means, we were not only intrigued by the concept but also by the sound it produced. In the picture we see Ond?a and Martin joined by Tomáš Kejmar, their PR man. 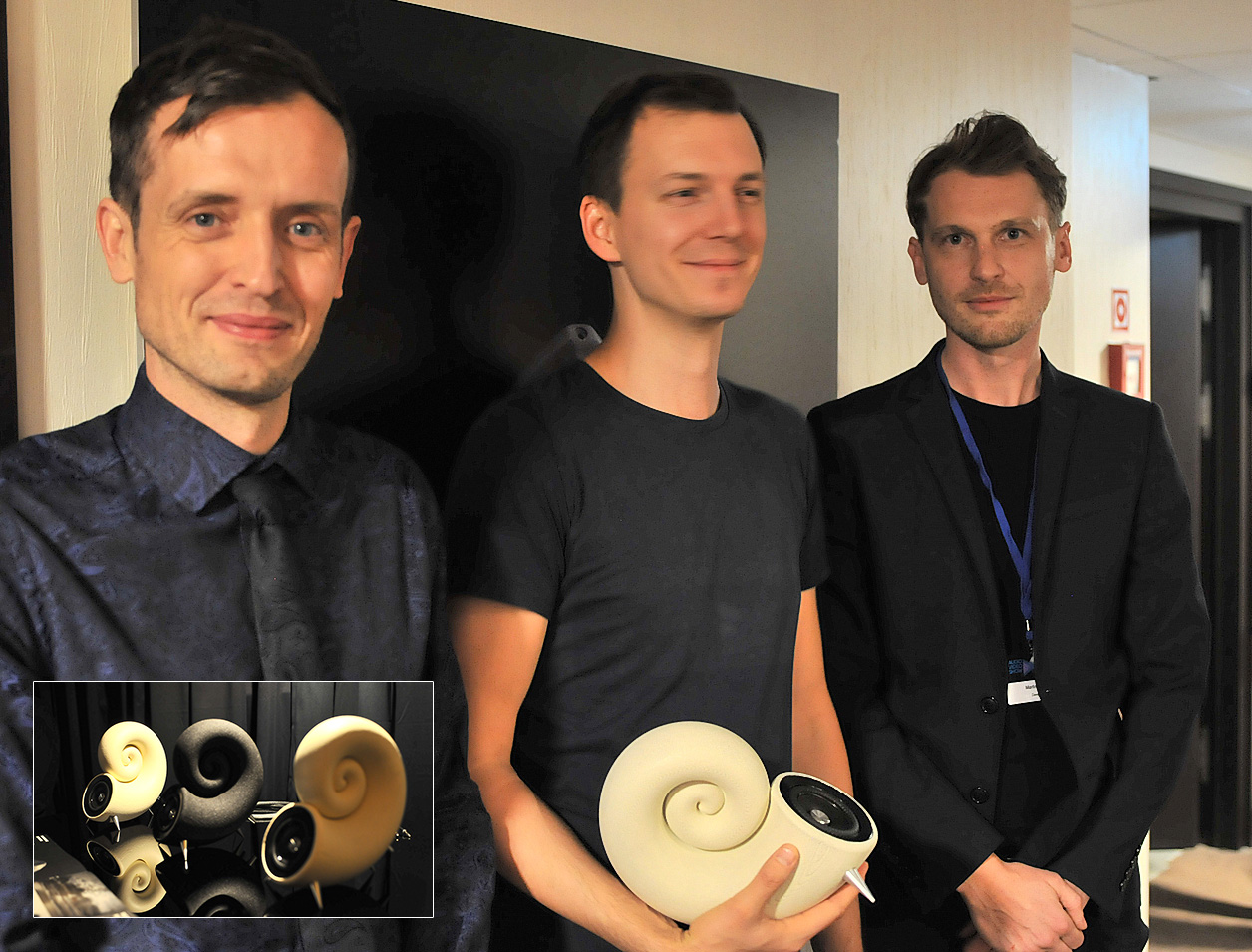 We picked one seminar to attend and that was Michael Fremer's. It wasn't so much for the presentation itself which we attended many years ago but more to witness the Polish attendees who no doubt were serious vinyl lovers. Michael's presentation was about how to set up a turntable and for this purpose he worked with a Transrotor in the Avantgarde room who had a very nice matte finish for their Duo Mezzo XD horns. The presentation was dedicated to Wally Malewicz, the Polish analogue guru who passed earlier this year.