Auris Audio of Serbia combined their Fortissimo integrated tube amplifier with their Poison 8. We had seen that model with its ribbon tweeter above the midrange before. Now we encountered the speaker with these drivers inverted. With 2 x KT120 power tubes per channel, the amp was plenty potent and the pair of ECC99 driver tubes per side are neutral enough to help the clear well-balanced sound we heard. The back of the room featured the Auris Nirvana headphone amp. As we will see, in Poland headfi is very popular. 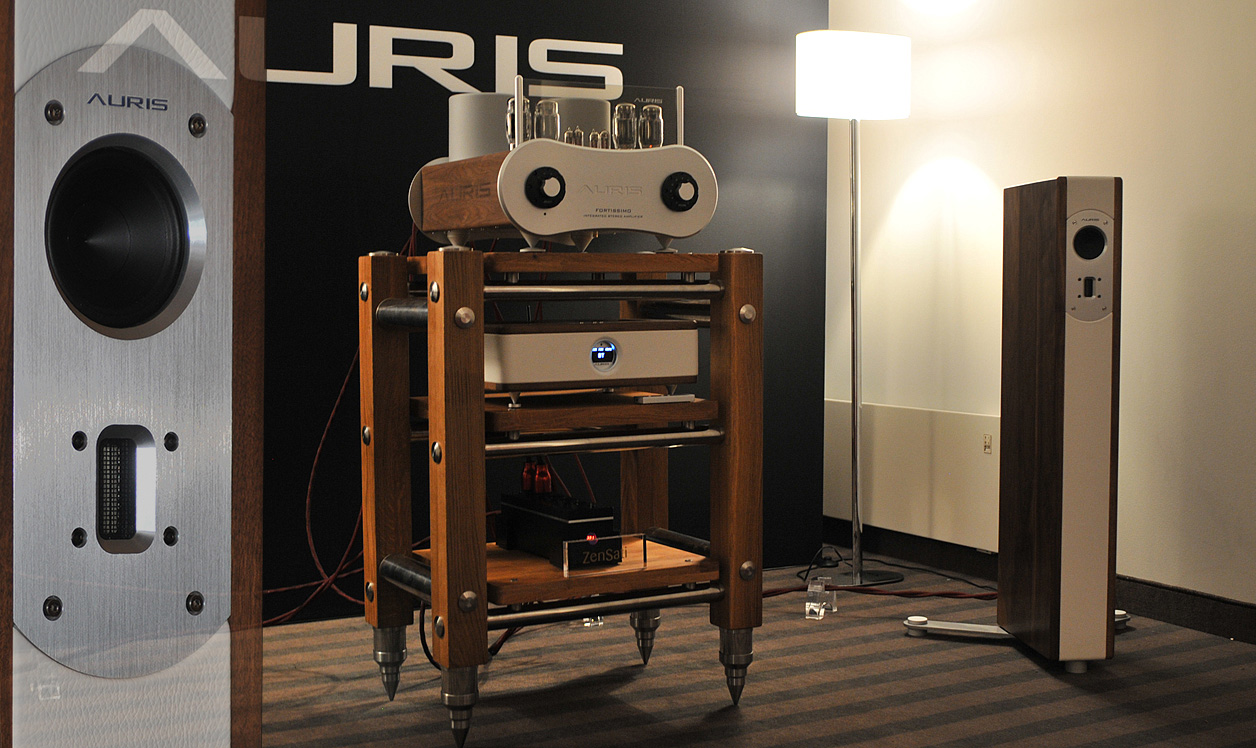 It felt like we ambushed the next room as the gentleman there still struggled with boxes and packing materials. Fortunately for him and us, the system in the front seemed ready. On top of the rack sat a Systemdek turntable with 12" Audio Origami arm. Amplification was in the hands of British Art Audio with a Conductor preamp and Harmony 300B monos. Unlike in years past, the speakers were the new ART Fifteen Dram Diamond Silver Signature with diamond tweeter and silver crossover/hookup wiring. The already long model name didn't include AlNiCo but the midrange's motor still uses it. A massive 15" woofer did bass. At a rated 91dB sensitivity, 8 watts from these  300B achieved lift-off but left little room for partying.

At previous shows our impression of the Cube Audio room disappointed relative to Srajan's enthusiasm. But this year we too climbed aboard the hype wagon with their latest Nenuphar. Here a 10" F10Neo widebander was driven by 1.5 watts of Italian Tektron 45S-I-ECY integrated amplifier which could have pushed up to 22 watts when fitted with different output tubes and in parallel single-ended mode. But 1.5 watts from single 45 were clearly sufficient. The other tubed device was a LampizatOr DAC. Our notes simply show a big smiley for this room.

Wojchiec Szemis had again brought a Kondo Ongaku integrated with Elrog 211. And like last year, he ran Type-A loudspeakers based on the original Snell Type-A/III speakers from the early '80s, a two-box design with the upper cabinet housing a 1" silk dome and 4.5" paper mid, the lower cabinet a 12" paper woofer for 35Hz – 18kHz (really) bandwidth. Rated at 93dB and 8?, it's an easy load even for flea-power amps. With 25wpc, Ongaku which translates to 'music' is no flea but here only the first watt would count and count it did. Just like the Snell speakers, the Kondo circuit is a design of the '80s. Somehow this was a magical audio period though admittedly, this was no budget system by any stretch. In the Kondo amp all wires including the transformer windings are pure silver and the capacitors' electrodes are silver foil. That plus many hours of manual labor drive its price tag into the €150K zone. A pair of Type A adds another €65K but the combination sounded incredibly relaxing and soothing. Hey, visiting a psychologist for the duration required to actually do the job can be more expensive.

Active My5 monitors by My Monitors were next. A custom 1" tweeter and custom 5" mid/woofer mounted to a relatively small cabinet sport a slotted vent as tail end of a 1.4m long labyrinth. A piggyback duet of B&O ICE power amps and DSP in a metal enclosure clung to the back. While the finish of the monitors was great, the back addendum looked more like an afterthought to question why it wasn't integrated into the main enclosure. My Monitors are working on an active subwoofer to cover 25Hz to 200Hz with a 2.33m transmission line.

Audio Hungary were from… duh, Hungary. That part was easy. They offer two integrated tube amplifiers. One is the Qualiton A50i with 50wpc in class A from two pairs of KT120. Also class A is the smaller A20i 20-watter with 5881. The Qualiton Phono was a two-box design with the power supply and signal-path circuitry separated. ECC83 and E88C handle gain without negative feedback. A pair of handsome Q40S 2-way loudspeakers for 35Hz to 40kHz at 85dB sensitivity completed the set.