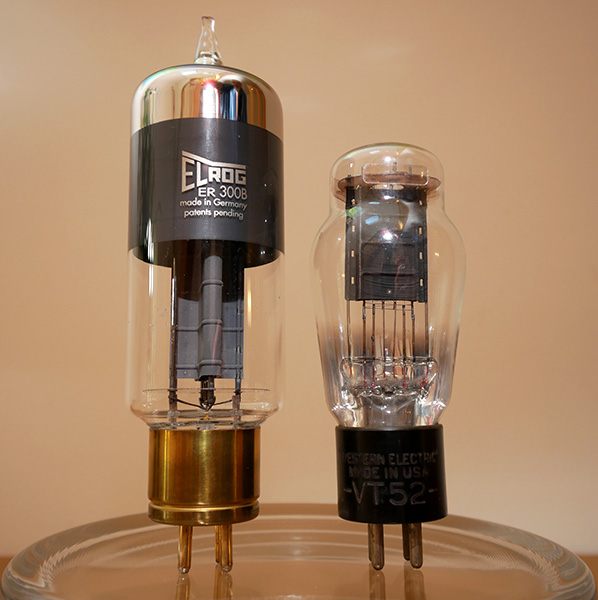 Elrog 300B & Western Electric VT52. When Dan's second care package arrived, it took less than 24 hours for me to write him a first impression. "Those WE VT52 are real winners, aren't they? It seems to me that all the modern tubes with their thicker glass, higher vacuum and more 'advanced' anode plating go after broader bandwidth. In turn they give up fluidity, elegance and generosity. So the WE VT52 then WE 300B do things which the Elrog 50 then 300B don't. At least that's my first take. If so, the old-timers knew a thing or two which so-called progress has forgotten." To which Dan replied, "exactly what my ears were whispering to me. As I said before, maybe we don't seem to help each other too much by having the same taste. Well, surprises are fine but confirmations just as valuable."

By then I had published Dawid's take on the LV 300B vs. KR T100. That ended on a similar note. In his LampizatOr Pacific DAC, two playback flavors split into more bass power, dynamic crunch and larger scaling for the T100; then textural refinement and temporal elasticity for the 300B which belonged to a higher league. This segues neatly into a purely personal classification I'd arrived at during my ownership of 300B SET amps. I'd come to view the Western Electric and TJ/Full Music as the vintage lot and the KR, EAT and EML variants as the moderns. The latter expanded bandwidth either in the bass, treble or both, emphasized more robust macro dynamics and a generally heavier more ripped and punchy mien. The vintage aesthetic, perhaps because it dated back to when playback bandwidth was narrower and music had only acoustic instruments, exhibited the more pliable rubato gestalt with higher microdynamic expressivity and finer tonal nuance.

Though on paper higher vacuum ratings of modern bottles read like unequivocal progress; though in the handling, thicker heavier bigger glass feels more reassuring and substantial – to the ear and on mostly acoustic music, the same quest for extra power and strength sacrifices suaveness and suppleness.

As Dawid wrote in his conclusion, "if I had to rate today's contestants in numbers, the LV300B would net 9/10 and a solid 7.5/10 would land on the T100's account. Still, to own both and shift between each according to mood and hardware I should view as my most ideal personal scenario." That's precisely the appeal and advantage of rolling (with) tubes. If you can end up with at least two strategic sets to cover your day-time/night-time moods—maximum illumination and vitality for the first, maximum finesse and subtlety for the second—you can cater to a musical style or emotional preference that falls more to one or the other. Depending on your tolerance of, or desire for, excess or at least magnification, those sets could be very different; or far less so. As one matures in this hobby after exploring many of its sonic highways and byways, it's often the case that what registers as 'right' lives in a pretty narrow area. Anything outside of it feels imbalanced or skewed. Now one may end up with two pairs of 45 from different makers; or with one PX25 and one 2A3 from the same maker and era to give just enough difference to be interesting yet not leave the inner circle of personal rightness.

With my quad of bottles from Dan, the moderns were the Elrog 300B and 50, the oldies the WE 300B and 'special 45' VT52. It won't come as a surprise that the two 300B held hands as did the 50/VT52. That divided my quartet into two duets. It also won't come as a surprise that the offset between modern and vintage, between more blunt and more subtle—oaken vs. willowy—wouldn't be grand. After all, they all had been cherry-picked by a man who'd done the exotic tube game for decades and could cull from a very expansive collection.

300B Western Electric & Elrog style. With vintage versus modern flavors previewed, how did they present? For a telling track, consider the "Adagio" from Mozart's Concerto N°23 in A Major K.488 as interpreted by the Jacques Loussier Jazz trio with string orchestra.

Unlike with Chopin, rubato and Mozart meet in mere whispers like two shy lovers who steal faint but meaningful glances. With Amadeus, that "temporary disregard of strict tempo to allow an expressive quickening or slackening usually without altering overall pace" happens between the lines and then once more between those lines. It's a very small liberty of pliancy in the phrasing but precisely where the WE expressed that micro dose of greater freedom. It also showed up in the fine flickers atop the famous string counterpoint where the vintage voicing resolved finer ripples of individual instruments. This wasn't about separation like cutting out a figure all the way down to the paper's edge. It was simply a finer surface suggestion of paralleled unison strings. 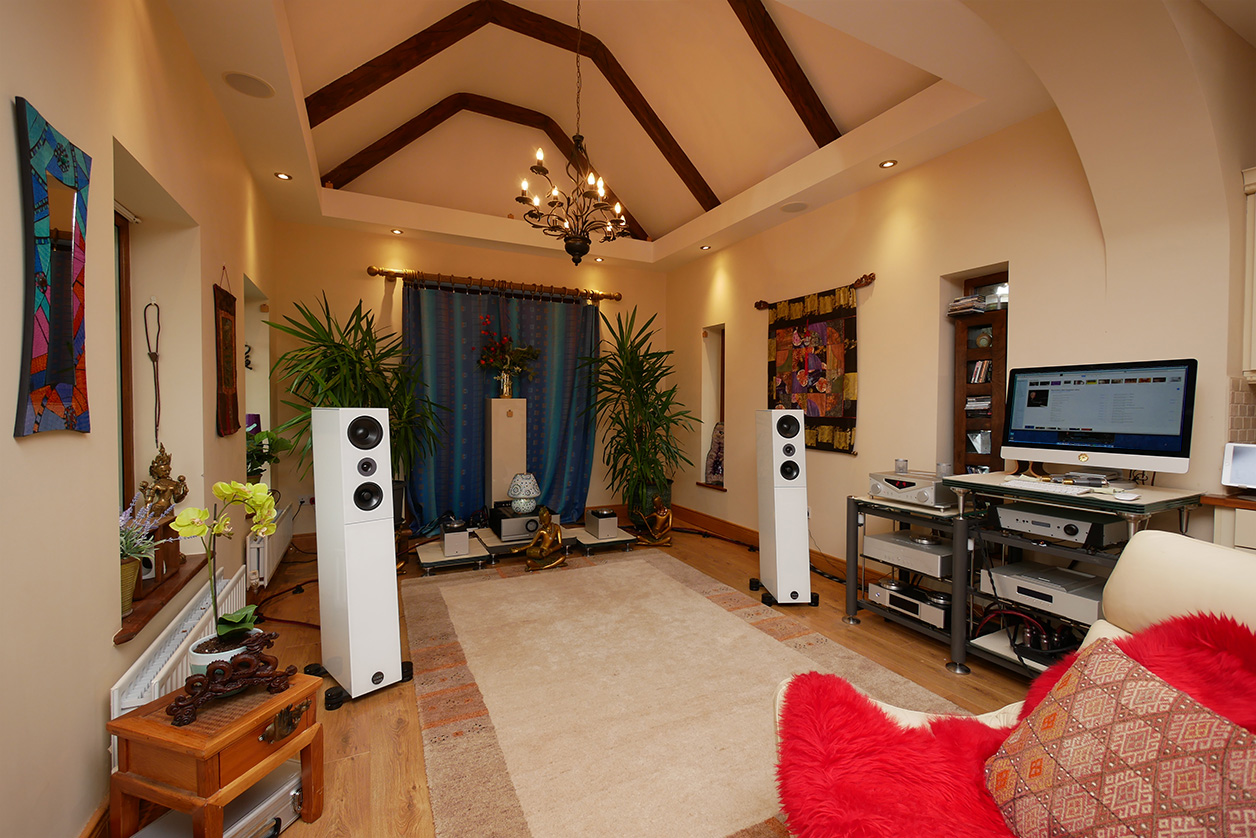 For behaving temporally just a tad stiffer, the Elrog also scaled up a bit more to call the WE the more intimate by contrast. This meant a minor shift of dynamic emphasis, with the Elrog a bit more dramatic in the macro domain, the Western Electric a bit more teased out in the micro. On bandwidth, the modern bottle particularly on the massed strings had a few whiskers more treble energy for those brighter lighter upper harmonics which aren't steely per se but do communicate a degree or two of more of the strings' steel cores. It also meant that the Elrog registered a tick more clear and crisp whilst the Western played in finer softer half shadows. From the wording and weighting, you'll appreciate that these were just a few degrees of difference; and that shifting music style would turn their advantages. For example, spin up Zepherin Saint's "Extended Mix Midnight Mawal" which I have on the Dubai Eklektic 2 compilation. Now the modern voicing's more ripped muscular behaviour created the greater rhythmic drive and gave the wailing vocals more warbling urgency.

VT52/50 style. Sticking with our clubby dance number, Dan's super 45 turned up the volume on rhythmic perspicacity and more lit-up crisper edging. This meant stricter separation, hence deeper insight into the waft and weave of a spikier more cracking groove. It also polished up textural gloss and slickness like an Apple Retina display behind sparkling glass. Returning to Loussier's Mozart meant that the opening melody's slow piano tones were more bell-like and silvery, not the softer lazier gold of the 300B. But between each other, the Elrog ER50 and WE VT52 replayed the positions of their 5V alternates. The vintage sample was slightly more soft and temporally taffy, the modern version more rippled and energetic. No longer having Vinnie's Japanese Takatsuki 300B on hand, my best guess places them between the Elrog ER50 and Elrog 300B. From what I'd heard by then and trusting memory, it was probably the 300B with the most airy explicit top end and subjective speed to belong halfway between its type and the modern 50.

Stepping back to condense and simplify, we focus on music's edgy angular incisive elements on one side; and its round soft diffusive aspects on the other. The former invite greater separation and perceived resolution. That's because our hearing uses transients to localize sounds which benefits the quasi visuals elements of soundstage mapping and imaging precision. The latter are more inclusive and combinant, not maximally individualized to become a more organic/blended aesthetic. The VT52/50 belong to the more angular lit-up camp, the 300B to the rounder and mellower. Obviously music consists of both elements like the "Haliko Chijende" track from the Zawose & Brook album Assembly tried to remind us of. Strategic choices from among my four tube pairs shifted emphasis accordingly but none departed my circle of trust. That simply means that to my ears, they all remained balanced and correct, thus 'somewhere in the middle'. Just in case it still needs spelling out, on the soft⇒crisp axis from left to right, we'd have the WE 300B, WE VT52, ER 300B and ER 50. The biggest difference would juxtapose the two outermost pairs.