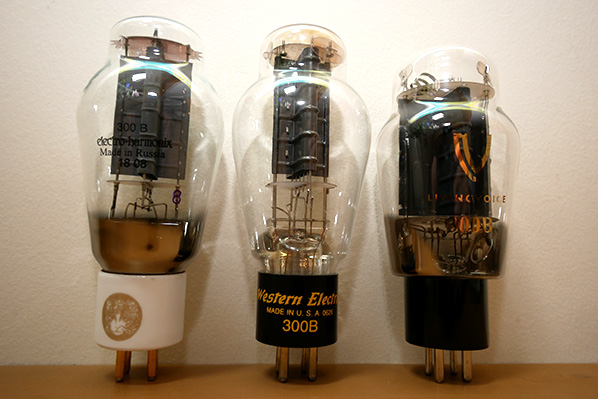 Living Voice versus Western Electric. Compared to the original, both Russia's ElectroHarmonix and Czechia's KR were physically heavier specimens, likely because of their thicker glass bulbs. As you can see, the Living Voice also was shortest of this lot whilst sharing its silvery pins with the Yanks where the EH showed off gold plating and off-centered screening of base logo versus glass print.

To test sonics, I reverted to the earlier speaker system with Pass XA-30.8 and Camerton monitors.

Kevin and Lynn Scott's Western Electric 'clone' was surprisingly similar indeed to Dan's now unobtainium original. And I have no way of knowing how theirs behaves in a standard transformer-coupled amplifier from Kondo or Art Audio to drive reactive speaker loads. There it could well hold important advantages. But that's a different application. What I heard in this grounded-grid direct-drive scenario was that the original still held an ace card which I considered important and attractive.

It had a bit more of the ER50's higher speed and 'spiritualized' airiness. Particularly in the bass, the Living Voice played it a bit denser and heavier. That gave the overall sound more grounded materialism whilst the attendant slightly higher damping—far less than the EH's but more than the WE's—removed some of the pliant willow-in-the-wind expressivity of undulating microdynamics which the WE had more of.

This aspect was particularly noticeable on vocal inflections. The original Western Electric carved out from 3D space the livelier presence. Whilst a more subtle distinction, it could be decisive for the right listener. If announced $1'499/pr production from WE's rebooted Rossville plant does manage to duplicate the original's sonics precisely, it could remain the 300B to beat for this particular buoyant temporally flexible quality. "The WE300-B tubes manufactured today are able to take advantage of materials that are of a higher quality and processes that are more advanced than were available in the past. The current tube enjoys a vacuum that is at least two decades lower (2×10**-6) Torr than previous runs due to the employment of turbomolecular vacuum pumps, resulting in longer life. Although the tube is newly produced, the filamentary cathode core material is from the original WE inventory derived from a 1963 melt from the Western Electric Hawthorne Works in Chicago. The tooling used in the manufacture of WE 300-B is original equipment, some going back as far as 1943." For new production, Western Electric promises 40'000 hours of usage. 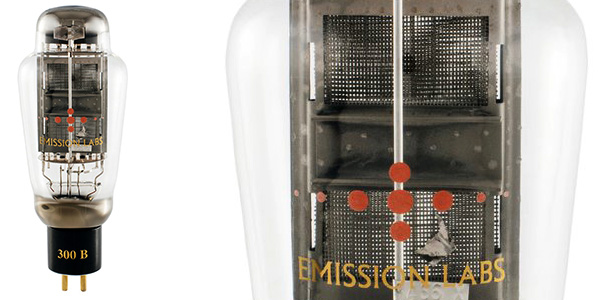 With Vinnie's preamp, if you want to create a bit of a hybrid between EH and original WE by mixing in just a tad of the former's thicker warmer more rigid muscular behaviour into the Western Electric, say 10% of one and 90% of the other, the Living Voice would be your very much obtainium choice. At this juncture, Dan came back: "Ordered a pair of T-100. Waiting for delivery. Will report back and send you something semi-exotic, VT52, which in my context delivers exceptionally well. Got the Terminator upgrade and tried it on Redbook. You were absolutely right, the cheapest great upgrade ever – more air, opened up more resolution, found its way back on my main rostrum. It's fun having it together with the iFi DSD Pro and APL Hifi feeding the three inputs of Vinnie's L2 and comparing the sound with a simple press on the remote. I'll add to the VT52 a pair of Elrog 300B. Then we can compare notes. By the way, not sure how much I could be of use with more comments. When I read yours in your tube rolling section, for a second I was confused, believing them to be mine. Agreeing with you 100% couldn't possibly be very valuable but it's fun." Since Dan would still use his own music, words and descriptions, I suggested that quite to the contrary, it would be useful if he was up for it. Dawid Grzyb would loan me his pair of T-100 which, in his LampizatOr DAC, had become his favorite over the PX4 also from KR. He was curious about the Living Voice 300B so I asked permission to forward my pair to him before it'd come back to the UK. Audiophile border crossings in the middle of the night.

Just then the Emission Labs mesh-plate 300B arrived. Those just cleared the preamp's metal openings but not Vinnie's covers. Perhaps that's why these very tall bulbous bottles produced very noticeable hum even though the Western Electric didn't without the grounded chimneys. Hum notwithstanding, sonically I found the mesh plates too soft and fluffy. They behaved as though our room's decay lengths had increased to create more… well, inter-meshing of reverb clouds. The overall presentation became too diffusive and misty. In this direct-drive application—transformer-coupled amplifiers might well respond very different—Dan's WE and Elrog were superior on speed, detail, jump factor and dynamic vigor. Since I wouldn't live with hum in the first place, the EML shipped back to their generous lender, a Dutch friend of Sasa's. Incidentally, Vinnie too preferred his Elrog and WE 300B to his mesh plates to suggest that L2 owners pursuing 300B can probably cross this type off their list.