It arrived in a single cardboard filled with numerous foam shapes. Two small boxes stored two identical sets of tubes and a handy remote which looked like something only Reinhard would do. Its rugged plastic enclosure sports an aluminium baffle with protruding screws, all identifiers in German and only two controls in reversed order; the left turns the volume up, the right turns it down. When asked, he explained that's how he's done it from the very beginning. This adorable twist fits our man rather well. The DFP measures 434 x 434 x 149mm WxDxH and weighs 10kg so is full-sized yet easily managed. Just as any other Thöress, it looks and feels very much like a mid-20th century's science-fair escapee. With its round-cornered thin-walled chassis, large knobs and greenish semi-glossy coating, the DFP doesn't resemble any hifi I know but is quite the looker. Reinhard's F2A11 didn't visually impress early on at all but I found this linestage charming from the start. Even though this vintage apparatus doesn't rock a CNC-milled housing, display or other mod cons, it's brilliantly executed. The detail devil is German after all and here represents perfectly clicking smooth knobs of spot-on resistance, a superior paint job, all enclosure parts precisely matched and put together, vents finely cut out and more. Up close it's obvious that Reinhard put a lot of work into this project. 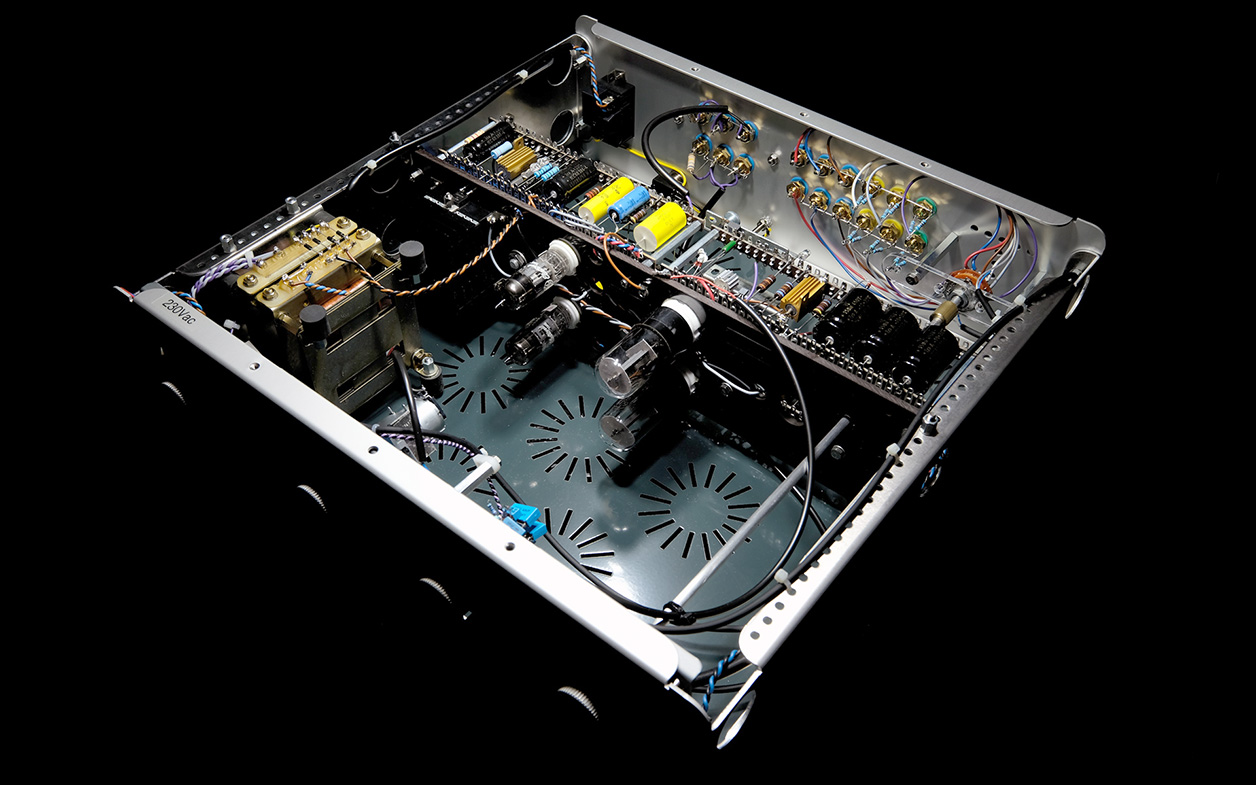 The DFP's front combines two stacked matte grey aluminium plates in nice contrast to its top and bottom. The outer surface loaded with German words sports four nicely lit openings each with a large knob fixed to the internal plate. This arrangement makes the front interestingly three-dimensional. Each plastic knob turns a translucent circle with inlaid indicator line. The secondary on/off rotary on the left neighbors the volume control followed by Reinhard's sensitivity and tone controls labeled Empfindlichkeit and Klang and the last knob is the input selector. The IR receiver opening below sits right next to two 6.3mm headphone ports. The selector switch between these enables either one or the other and disengages both in the middle. It's best to set it like so as a linestage since Reinhard shuns an auto sensor to have his pre-outs and headfi outs live simultaneously. All lights on the front show their appealing orange glow fully only in the dark. Daylight has their glow barely visible.

The top and bottom sport multiple circular vent notches. Four rubber feet on the underbelly continue on to the rear occupied by the usual suspects of IEC socket with mains switch and self-replaceable fuse, three RCA outputs and six matching inputs. There's also a ground post and ground lift switch. All RCA sockets are widely placed to accept all plugs without issue. The inputs are color-coded for a reason. 1, 2 and 3 are followed by 26dB of voltage gain, pairs 4+5 by 20dB, 6 by 15dB. Reinhard is no fan of balanced home circuity so never uses XLR. Let's get back to the sense and sensibility or Empfindlichkeit and Klang controls. Positions 1 (significant bass and average treble boost), 2 (mild treble boost) and 3 (flat) are of 6dB lower gain whereas positions 4 (average bass boost), 5 (mild bass boost) and 6 (flat) are at full gain. This creates lots of room to maneuver your sonic tailoring and the low sensitivity/gain options help counteract the Fletcher-Munson loudness curve. Each implements in accordance with Reinhard's minimalist approach, so a single capacitor per click and an extra two for his anti-loudness presets. 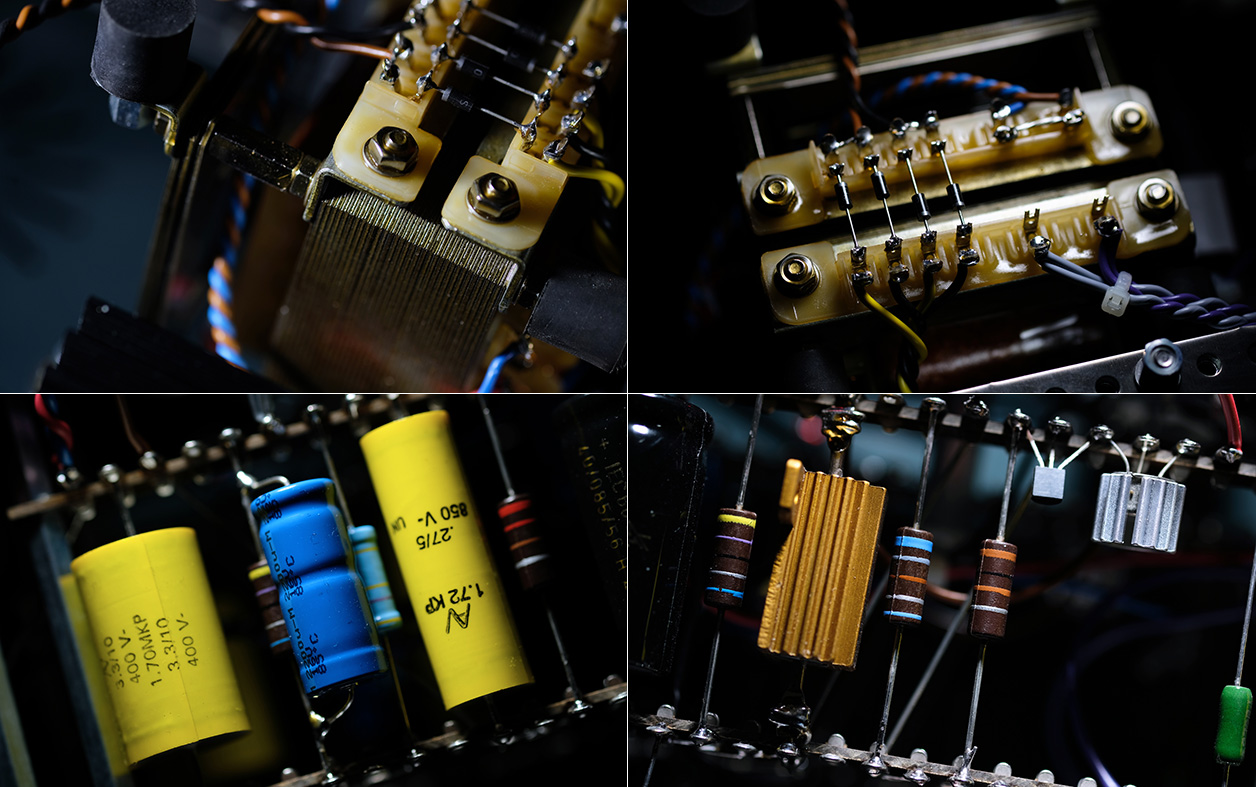 Getting inside the box was a breeze. Eight easily removed screws, four on its top and two per side, was all it took. To many the internals will seem frugal and rightfully so. Where sheer parts count goes, all of Reinhard's circuits looks bare for a reason. To end up with just a few quality ingredients and performance we'll still get to proves that less is indeed more when properly executed. Lots of air under the hood results from extensive reductionism, simplicity, minimalism and engineering elegance. Reinhard always trims his work to the point where there's no excess left. Once that's arrived at, he optimizes each part for best sonics which is anything but easy. Not for a second did I think the nicely assembled innards  a shocking example of cost cutting. This circuitry is executed point-to-point with almost all components mounted to two support rails per channel. There are quality resistors and capacitors from Vishay and Wima, a motorized Alps potentiometer specified for a very gradual taper then cherry-picked by measurements from a large batch. 0.5dB channel imbalance is the outer limit. Only a handful survive that inspection whereas the equally tested then paired NOS tubes score lower rejection numbers. Many of them still are within spec after decades of sleeping in their boxes. 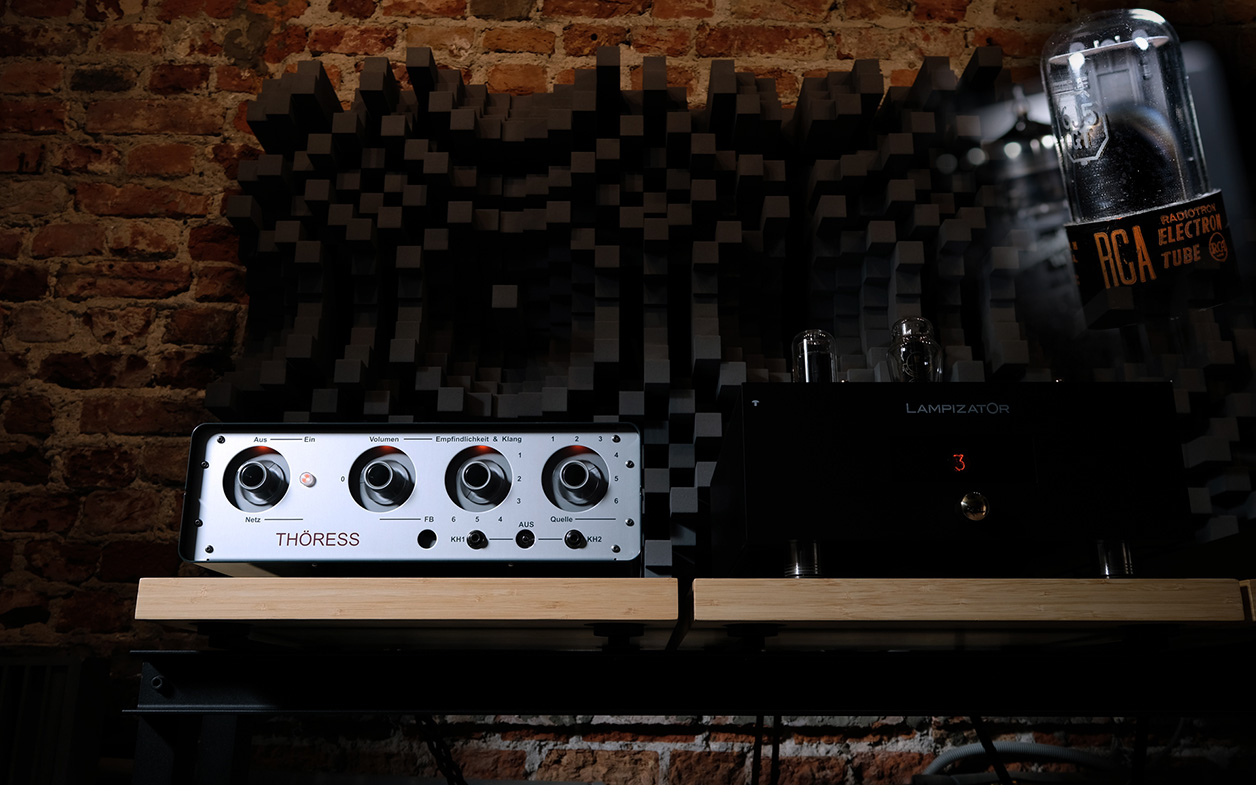