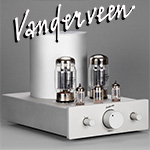 Summer fling or year-round thing? In full-range mode, the sound did fatten up more. Separation took a small hit, so did micro resolution. Bass differences were primarily from losing the sub. Very much to the Trans's credit, the raw bass which these 36Hz ports can generate solo left little to be desired save for ultimate grip. I reverted to the Bakoon for a personal best-case scenario. That instantly drove up magnification power, contrast ratio and overall illumination whereby recorded reflections lit up venue space. Simon Lee's $2'500 i5 can't reach these same levels either with its 50 watts of deliberately darker transistor power. So the AMP-13 was a very unfair far costlier comparator. As a handy reality check, it simply served up proof. Relative to close-mic'd bite, sibilants, overtone halos and the difference delta between sounds and silence—call it frisson or immediacy—the tubes took virtual steps away from the mic. That mellowed such proximity effects. This had been so already for high-pass mode but not to the same extent. If you prioritize textural gloss, lit-up spaciousness, harmonic sprays and such, running the Vanderveen normal will incite Vanderlust to elsewhere; if you know the difference from something that elevates these aspects to another level.

So to whom will the Trans-SE10 appeal? First off, it's a kit. Hello kit builders. Within their ranks, it should attract those who dislike Dennis Had-style 'deep triode' machines and their intense saturation but lazy timing and gooey THD soup. It's for those who like fine transistor sound but have a preference for different means. On 11.5.21, CNN published a Brad Lendon article titled "The Broker, The Astronaut and The Vampire". It's about avid aficionados who, under colorful pseudonyms, scour the globe for antique Soviet time pieces. Like all watch collectors, ultimate precision isn't their thing. That's for smartphones with satellite uplinks to atomic clocks. For watch collectors, the means are more important and routinely include so-called complications. For this particular group, it's also a tacit connection to a bygone era.

I see parallels with the Vanderveen/tentlabs amp. There's a colorful pseudonym in Trans to span the gamut from transgression to transfiguration. There are tubes which link to another era. There's a sonic profile achievable with less complications aka tube aging/replacement to delight in contrarious means. A Trans shopper views transistors like smartphones; too ordinary to be worthy of real affection. Likewise for generic tube sound (whatever that might be). It'd be too mundane, fuzzy and colored. In general terms, the Trans should appeal to prospective Linear Tube Audio shoppers who'd actually prefer a slightly darker/mellower take on the David Berning aesthetic.

The big difference is that the innards of Berning amps are much too complicated for kit builders. Many would-be manufacturers couldn't take them on until LTA were granted the license. We're back at a quite different valve amp that can be assembled at home, costs less than a week-long vacation in a domestic B&B with nice meals on the town then behaves far more controlled and capable than the power rating would suggest. It drives no exotic glass that would be costly to maintain. On top of that it can roll with 6550, KT88, KT90, KT120 and KT150. Being a clearly different circuit than yet another classic SET, it's actually surprising that its creators opted to sneak it onto the scene in this underground fashion. Loaded into a posher chassis à la Yamamoto, adding remote control then high-street cred, this amp could sell for €5'000 and remain competitive. But it sells for 1'678.

Added up, the current kit iteration really is quite the vanderful little thing.

Is it a harbinger of bigger Transmatters to come? Time should tell…

Manufacturer's response: Dear Srajan, I was very happy with your approach to the Trans-SE10. You did it in total freedom, with all pluses and minuses in your observations and experiments. For me this was important because I have abundant measurement results and knowledge of the SE10. Every time you came with an observation, I checked and compared it to my measurement results. You deserve my compliments for very good observing, in total agreement with my knowledge and findings!!! So please continue on your trail. You are doing interesting and reliable observations. You close your article with a glimpse into the future. The SE10 concept was born around 2014. Meanwhile I continued experimentation and now am at the powerful level of the Trans-PP80 (80-watt push/pull) where the major restrictions of the small SE10 concept are solved. I plan to discuss with Guido if and how we can proceed on this trail. But you know it already: it will take time. Again, many thanks for your good work, please accept my compliments. Kind regards, Menno van der Veen