NL ⇒ IE in 13 days. Upon receipt by regular post so with assorted other mail, the amp's oversized transformer cowl turned freely. A bit of screwing fixed that. Inserting the small valves showed a bit of give in the sockets. I'd not reviewed an assembled kit amp in far too many pale moons to know what buyer expectations at this €1'678 price point might be. ChiFi from Denafrips to Kinki Studio does fit'n'finish which the Trans-SE10 can't match. But it certainly looked business-like and solid. At 10wpc, a natural inclination might be to pursue the most emo of speakers. Marja & Henk who were originally slated would have used their 109dB Avantgarde Duo Omega high-Ω hornspeakers. I haven't the faintest whether under such extreme scrutiny, our amp would have remained respectfully quiet. Even many transistors amps aren't up to snuff when such noise magnifiers aim at them. Tubes tend to be a bit more not less critical. Since our Dutchies departed this earthly realm far too soon, we'll never know. I would play mostly in the ~93dB sensitivities so 15dB lower. Those I expected the Tentlabs to ace. Outfitted with KT88 power tubes, up the stairs it was. For a first check I had my extreme nearfield system. A deliberately arm-less chair lets me sit half lotus to pull up all the way to the hutch. Late at night when I'm not headfi'ing the Raal SR1a ribbons, that's how I listen over speakers; at very subdued volumes, speaker membranes within actual reach of my hands. That's real close. 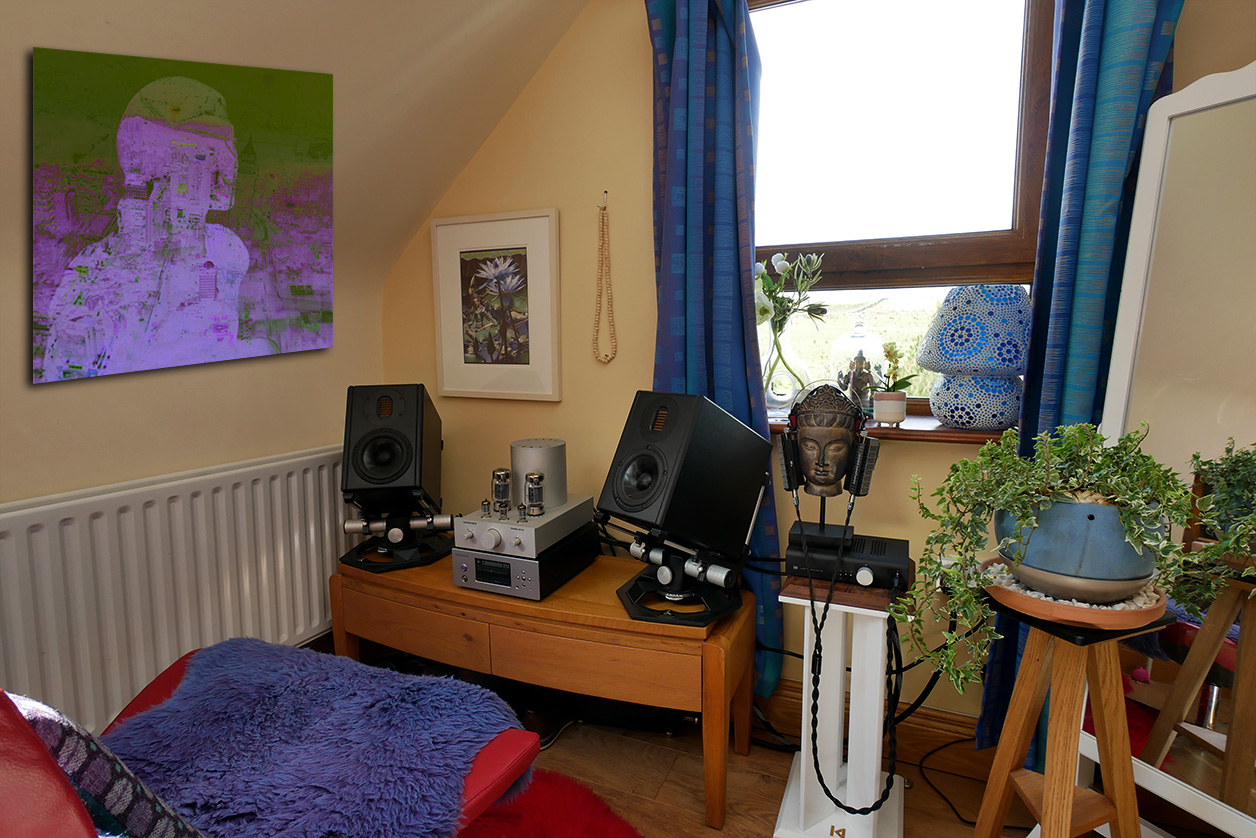 The usual amp here is Bakoon's 25wpc AMP-13R. The source is a basic Soundaware A280 SD card transport. Its XLR outputs feed the Schiit Jotunheim R, the RCA the 13R so now tube amp; via Grimm Audio SQM cabling no less. The speakers too are Dutch so Acelec Model One. The now unobtainium desktop stands were from Ardán Audio, an Irish outfit. "Yeah but… those are 84dB monitors!" So? Sitting so near, I'd get 84dB from a lone watt. Do you realize how loud that would be? With the Trans-SE10's pot, I sat at ~9:00. That  was illuminated by a nice orange LED. But my usual Zu power cord wouldn't fit. It features an IEC barrel as do all my 'upscale' cords. The amp's business end hasn't enough room to barrel up. It would if the IEC mounted the other way. I had to reach into a grab bin of throwaway cords to find one with a nude IEC. Done. Back to SPL. In this setup even at midday levels, I'd never meet the volume at high noon. And, the amp in the actual pot setting was quiet without signal, only had very faint noise fully open, then played music with the pot back at ~9:00. I had proof of life.

The Bakoon is our home's probably most advanced amp just short on power. From the Vanderveen I neither expected nor got the same intense resolution. That manifested primarily as reduced contrast. It's the opposite of what, for an AudiaZ all-Accuton speaker, a recently syndicated fairaudio reviewer cleverly described as "rustles, pricks and metallic scratching noises surround female talk-song. Those sounds now juxtaposed a blackground like distant stars do a night sky in the high Atacama desert." Having lived in the high desert of New Mexico, I can attest to the vividness whereby stars popped on its nocturnal firmament. The Trans expressed some virtual light pollution like cities create. Our sagebrush desert's tall contrast ratio had come from high elevation, thinner air and low population density for no earthly light interference against the dark range of the Sangre de Cristo mountains. Hifi's equivalent is extreme S/NR. With the Trans, that naturally softened like leaving the high plateau of Taos for the lower elevation and bigger city of Breaking Bad's Albuquerque.

That sense of the softer also extended to the low frequencies. It wasn't relative to reach or power. It concerned texture from more relaxed control. With other systems in our digs more representative of how most buyers will use the Vanderveen, I'll stop first impressions here. The valve amp's primary difference was a grouped effect of lower resolution, lower contrast and softer textures. A perfectly fair first takeaway is to not expect the super-dense nearly humid/cloying milieu which Grandinote wring from their pure transistors in an attempt to emulate classic tube sound. The Vanderveen sat instantly closer to LTA's cooler quicker notions on a far more modern valve aesthetic. It's what today's design brief suggested all along. My first date certainly confirmed it. Truth in advertising. Onto a longer second date still in the same room but now main system.