Neti neti. It's an approach to self realization promoted by Jiddu Krishnamurti: not this, not that. By rejecting all that we're not—thoughts, emotions, sensations, beliefs, body, mind—we peel the onion of self identification. If pursued with ultimate rigor, we eventually end up with shunyata. That's not a power conditioner but the emptiness of pure consciousness. With our hifi assignment, we too can whittle away more of what its sound was not to point at what it was. Not on the menu was tubular elasticity. It's that peculiar quality of elevated bel canto or rubato which adores simple vocals and cello but not propulsive electronica. Not on the menu either was excess density to obscure soundstage layers. By implication, the Trans-SE10 played it taut, controlled and well sorted for proper rhythmic tension and elan. It didn't go soft on timing to introduce confusion or uncertainty. Even very beat-heavy ambient chicanery panned across enormous soundstages with studio/synth trickery came off adroit and huge. 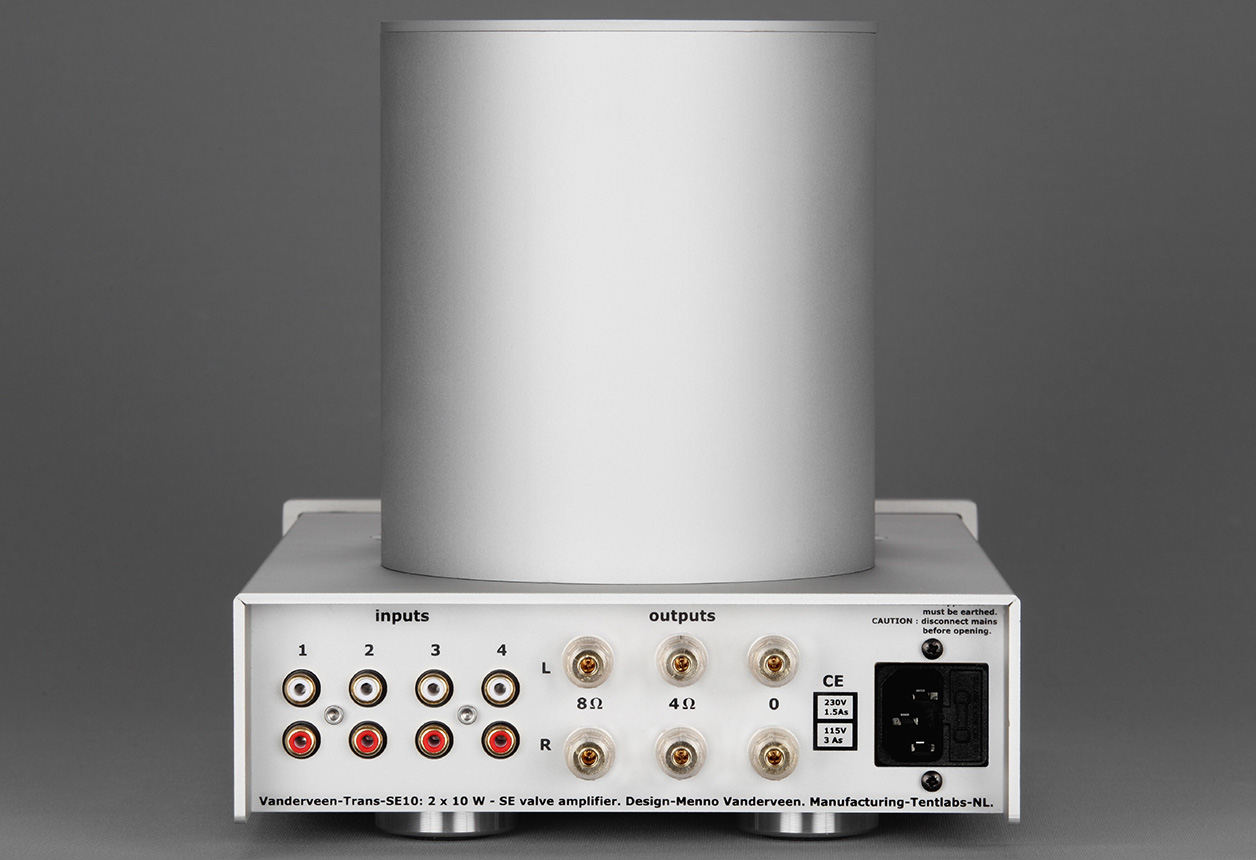 If the IEC/fuse housing turned this way, standard power cords would fit. Being seated the other way, only a nude not barrel-sleeved power plug will go in. Something to think about if you assemble your own.

Not on the menu was tubular opacity. The Vanderveen developed a bit more body than the Liszt but some of that was a reduction of energy in the air and brilliance regions. By perception, the midband now gained some weight but didn't at all crowd forward so nothing shifted in my stage perspective. Thicker and slower than this tube amp was Simon Audio's solid-state 50wpc i5 especially with the stock Burson Classic discrete opamps. Even the Vivid version I rolled in was still fatter than today's Dutchie. Naturally its tubes weren't as dynamic as the paralleled Liszt transistors particularly on massed orchestral. Such fare I cued up just for a reality check. Now I heard how dynamic range compressed. It's simply not the sort of music buyers of low-power amps tend to do much of. So we just ticked off a box to keep it honest. Tick.

Definitely not on the menu were chalkiness or color monotony. If our views on negative feedback are informed by valve electronics which make it adjustable, we've probably noted that as we went from zero through moderate to max, we sacrificed juiciness and color intensity. This is a typical observation. The vast majority of owners of such gear prefer to run it with no or very modest feedback. The Vanderveen circuit is loaded with fixed feedback yet related notions meet the executioner by guillotine. Chop, there went that head space. That's because the amp suffers none of the expected effects. It's simply not pale, monochromatic, brittle or dry; at all. Having negated ourselves into good proximity, let's consider what the Trans sound was: slightly softer on the leading edge than our transistors though still very articulate and concise; slightly richer than our more lit-up transistors so with a somewhat narrower range of tone modulations; not quite as dynamically charged as (cough) twenty times the power. Relative to beat fidelity as tunes playing in the pocket, I heard no less than usual. On soundstage specificity, the Exicons of extreme bandwidth had the edge but do so over many other amps. And that was essentially it for what changed when I switched over to the small amp; that and playing things just a tad louder to 'compensate' for its less intense resolution. 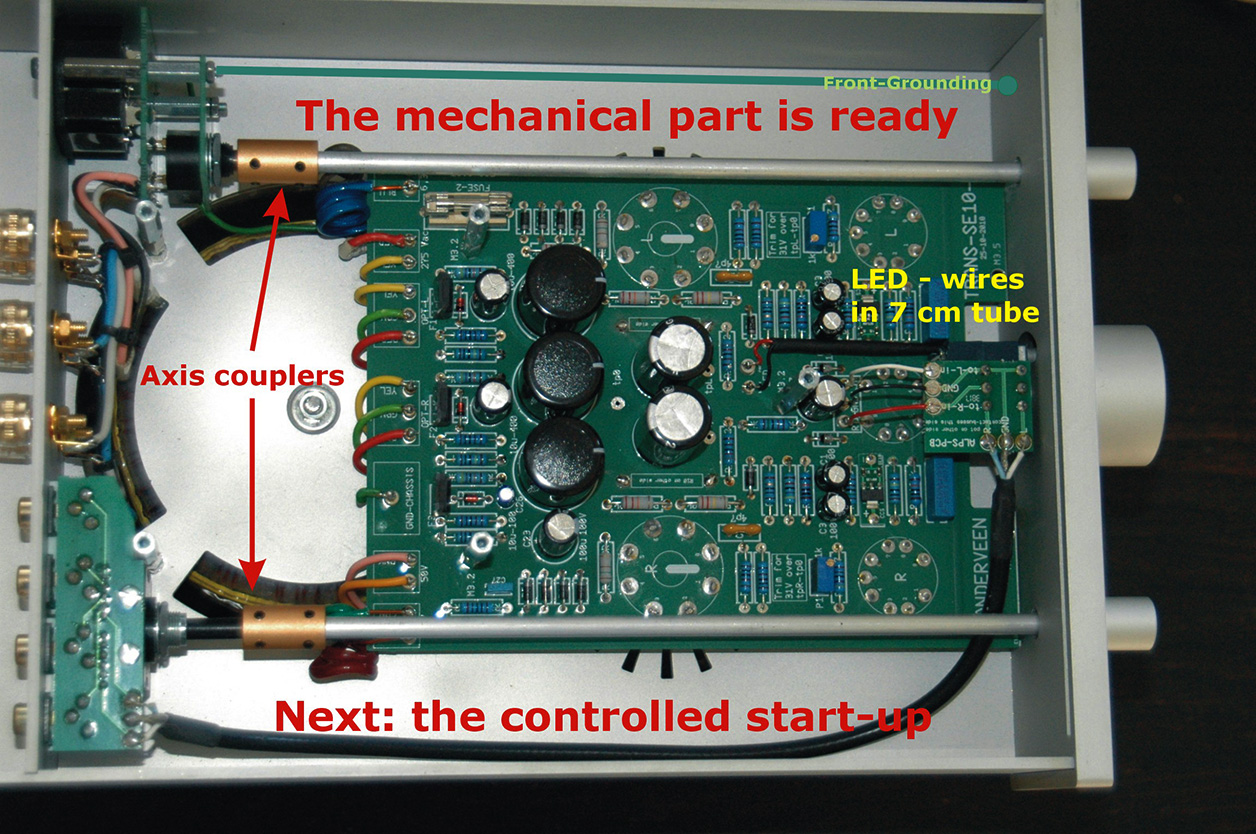 The type of clearly marked photo which makes up the detailed assembly instructions.

Considering just how much less one pays for it, that could (or should) come as just a bit of a shock. It certainly surprised me. In my idealized context then, the Trans SE10 was the rare valve amp this guy converted to transistors could easily live with. On the relative weighting of dryness, damping, control, timing, tone and image density, it was surprisingly similar so from the same general sound family or style. In terms of cuisines, it was still Thai not French cooking to use the exact same spices and ingredients. Only chef was different to slightly change how much of each spice to use. With my second date a happy success, it was time to challenge our chemistry and move into day-to-day doldrums. Re-enter low bass, remove the sub, play the exact same tunes at the same SPL so ~30dB below raw source voltage. Full-range into copasetic passive speakers is how most buyers will use the amp. My extra beyond standard was the magnetic passive pre. I wanted to change only one item which was going from its filtered to its unfiltered outputs. And frankly, I didn't mind that this would retain convenient remote control over volume.

So what changed about the amp's sound and behavior when vacation was over and 9-5 life back?