With music servers basic or elite, their GUI is a major part of the proposition. To my eyes Euphony's Stylus player looked and worked truly ace. Here's a 7-across view with the playing album cover scaled up but faded in the background; and green popups pasted to show what happens very quickly when you load a song, album or playlist to RAM. 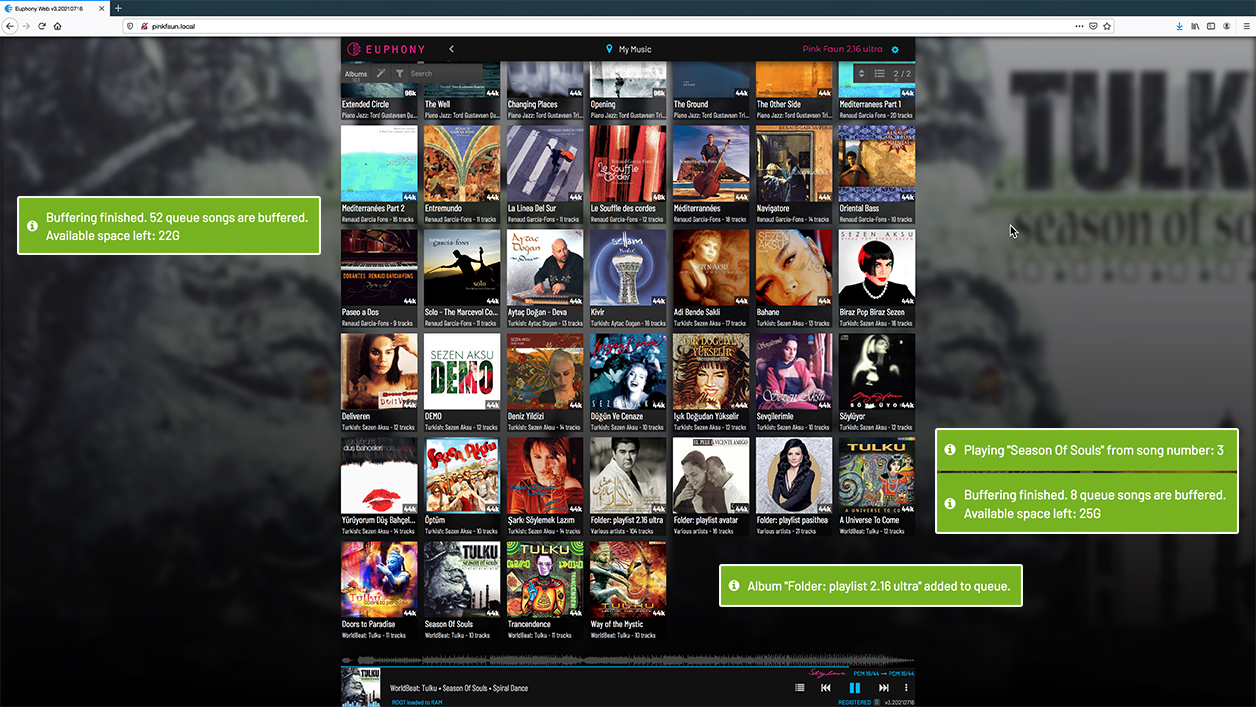 Here's a 6-across gallery view next to the list option. Note the small '44k' overlay on each cover that's Redbook. One sees its sample rate at a glance. 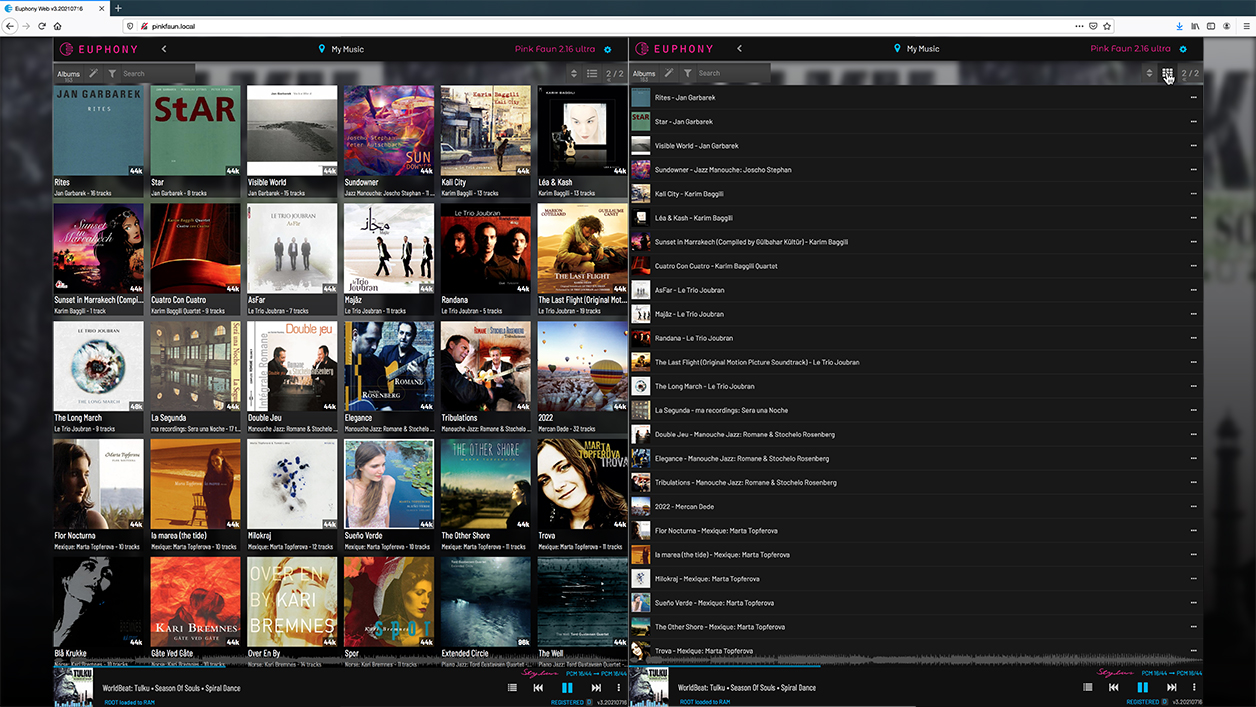 Next we see a playing album broken out into its full track list. Clicking on its blue title bar with cover thumbnail collapses it again. Either way the track playing shows at the bottom of the page. Also shown is how a right-click on the 'i' for info button in each track opens an 'add to playlist' window. Currently playlists are accessed in the pull-down menu right below the Euphony logo. I asked Jord whether they could be integrated into the gallery view as though they were albums. He thought the idea worthy of discussion in their next tech meet. We also see how the playing album shows at full illumination whilst everything else on the page renders darker. It's super friendly during listening by minimizing screen distractions and avoiding unnecessary animated flash without feeling bare-boned. As a devout iTunes fan—for its interface not sonics!—Euphony was a very intuitive stand-in; just what this patient's doctor would prescribe for maximum health and happiness with a virtually flat learning curve. 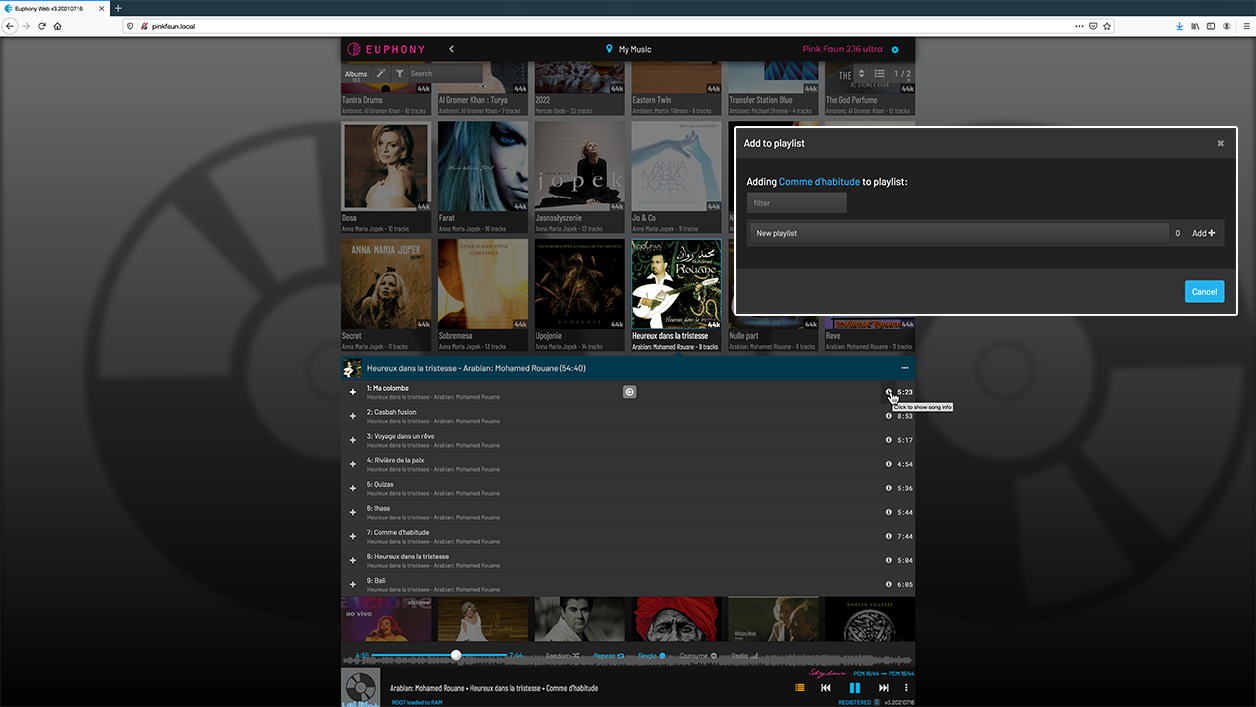 Here's a look at…

…  a playing album's info view; the blue scan bar below triggered where one fast forwards/rewinds with the cursor; and overlaid on the lot the 'play & relax' bar. That dims the entire display whilst access to the 2.16 ultra disables by cutting power to its network card. It resumes normal view when the files in RAM finished playing. Listening offline appeals to me already on the conspiracy basis of despising Big Corp. spying on us all to collect sellable data. Whatever we do online is always open to being viewed and hacked by those with the necessary skills and motivation. The only way to frustrate these capitalist voyeurs for good is going offline. If play and relax were to still add sonic brownie points, so much the better. I was perfectly happy with it just cutting the Internet umbilical. 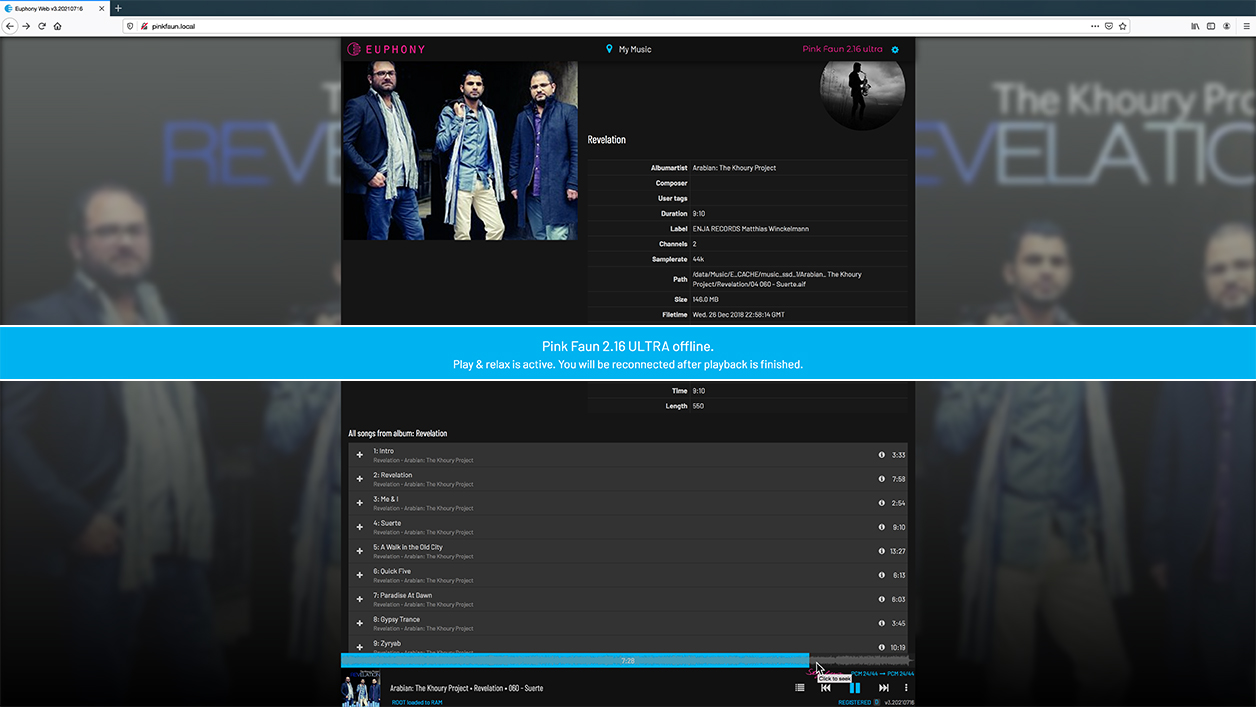 Confession time. As outlined already, I've been an iMac holdout because I'd not come across anything I'd rather use. By the same token I'm keenly aware that the days of iTunes as my current GUI fronting Audirvana as the traffic-routing optimization engine are numbered. I've thus contemplated how I might eventually/soon escape the closed-loop infrastructure of iTunes. How would I best duplicate its familiar functionality which serves my needs with exclusively local files to a 't'? Working with Euphony had me quickly feel right at home. Certain still missing features important to me are already part of the next update. Seeing how my iTunes folders' carefully curated custom tags imported unchanged eliminated another concern; as did file-type agnosticism relative to aiff/flac. Old dog, new tricks. Very happy tails already. I'd not felt those when using LampizatOr's SuperKomputer, Antipodes, QAT or X-odos kit. With the graphic user interface described and shown in screen shots, time for the hardware part of the equation. That determines sonic performance.