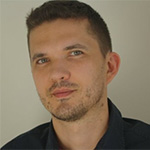 ED. Electrically dubious? Not today. It's short for embrace distortion. To some it could seem the same thing. Not to Mozzaik Audio's Mihael Munta [left] and his designer Marko Dvecko [right]. For them it's company slogan and religion. It's not about pretending distortion away. It's about exploiting it to lower it. First shown at the Warszaw 2019 show in prototype form, their Mozzaik1 is a processor/amplifier. Into one carbon-fiber/aluminium case pack four channels of class D (220wpc + 150wpc into 8Ω to bi-amp) and unique distortion controllers. Those operate in the digital domain to "predictably correct harmonic distortion in the speakers". There are three groups of knobs, each with a coarse 0-6 control on top and a fine 0-11 control beneath it. Input impedance is 50kΩ, voltage gain 32dB.

"We also have another product coming as soon as Mozzaik1 goes into production. That'll be a DAC. In the future we want to have a full line of products under our brand. Regarding the break-in you requested for your loaner, that won't be necessary. We control distortion with precise electronic circuits. Those are time invariant." And that's all I knew from a show flyer and a few early June 2020 emails when Mihael pre-booked their review.

When last I came across an amplifier whose adjustments aimed at the harmonic distortion interaction between amp and speaker to lower it at the ear, it was the late Eduardo de Lima of Brazil's Audiopax. Speakers are by far the biggest distortion generators in hifi. The notion of a feed-forward error correction system built into an amplifier must have occurred to many other bright audio minds as a tantalizing concept as well. Alas, making it happen seems to have been rather more elusive.

The 'up' terminals are for the lower-power outputs, the 'down' terminals for the high-power variants. The lack of separate pot implies that both have identical voltage gain.

I was keen to learn what our Croatian inventors had cooked up. One question was, how does the Mozzaik1 know how our speaker deviates to create just the right compensation? Is this done purely by ear? Like with other active speakers, Fram Audio's proprietary speaker processor is different. Its corrective code is calibrated to each model. It's the designer who measured all deviations at the output of his drivers, then wrote algorithms into his processor ahead of the internal amplification. Voilà, global feed-forward error correction whose only user interventions are boundary compensation profiles. Another question was, what do each of the three Crotian control knob groups actually do? The first symbol suggested phase, the second focus, the last one amplitude?