John Wick (of Wikipedia fame): "The viscosity of a fluid is a measure of its resistance to deformation at a given rate. For liquids, it corresponds to the informal concept of 'thickness' where syrup has a higher viscosity than water. Viscosity can be thought of as quantifying the internal friction that arises between adjacent layers of fluids in relative motion. A fluid without resistance to shear stress is known as an ideal or inviscid fluid. Zero viscosity is observed only at very low temperatures in super fluids. Otherwise, the second law of thermodynamics requires all fluids to have positive viscosity." 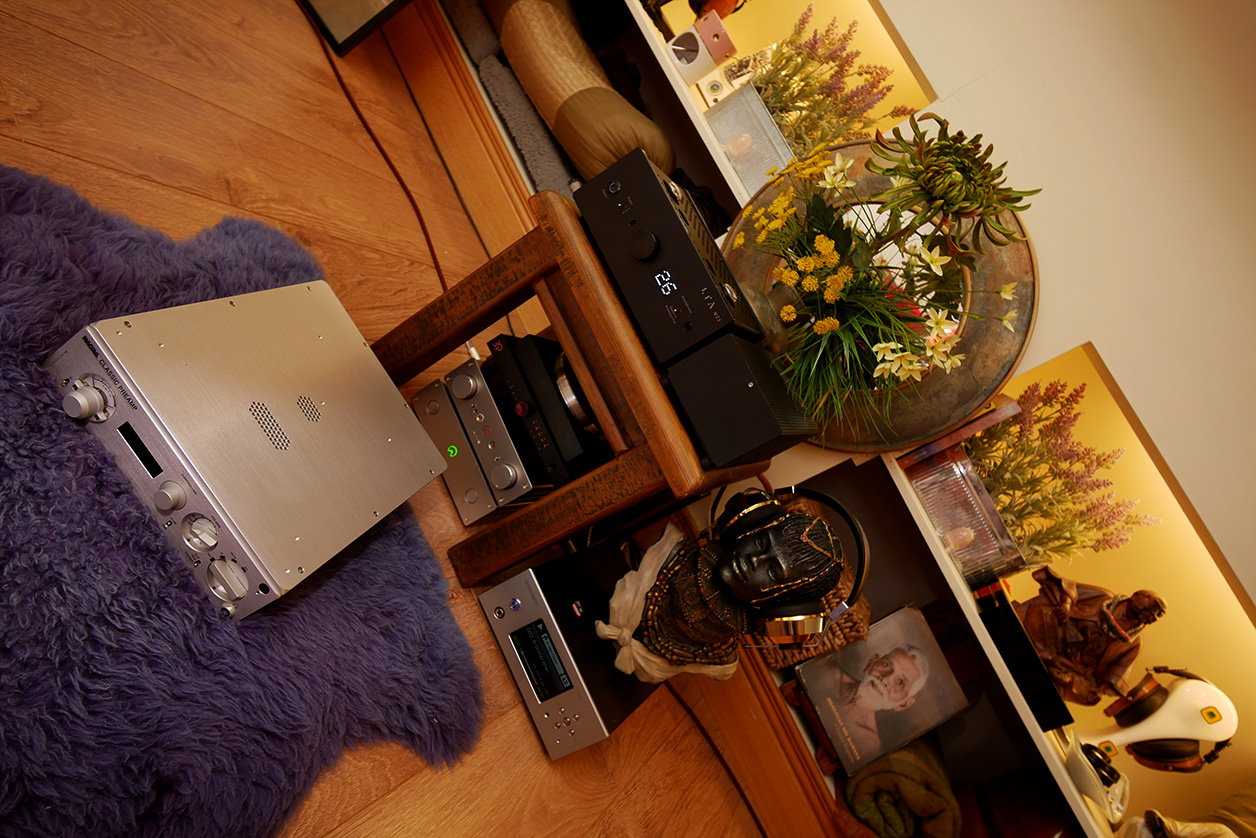 So we recognize that all fluids exhibit relative thickness, solidity and flow resistance. By differing degrees, being positively viscous is the natural order. True inviscitude is pure theory. Which segues neatly into comparing the amp-direct Alps pot of the JAVS DAC to bypassing it into the Nagra or LTA tube preamps. DAC/amp direct was quickest, thinnest and least solid to express lowest viscosity. Edges were sharpest, separation keenest, sense of gush—my sense of music's least opposed flow—highest. The Nagra's 12AX/T7 triodes added a few atomized drops of essential oil to the virtual water. As Wiki's definition explained, increased viscosity meant higher thickness and solidity. Implicit was some resistance to flow rate so a small loss of speed. Sonically this meant slightly softer edges, slightly more gradual transitions. The MZ3's 12SX7-GT pushed this envelope farther to build out still greater robustness of tonal chunkiness, more roundness, fatter tone, lengthier decay trails.

This patently benefited an elegiac already sustain-rich number like Jacques Loussier's smooth French jazz-up of Satie's popular "Gymnopedie N° 1". Staying with a concert grand but putting it into the hammering hands of Spaniard Dorantes for a different approach…

… the same tubular enhancements went the other way. After all, what's good for the hen is good for the cock. If you find that cocked up because you preferred the crisper more percussive attacks of transistors pure or negative feedback-enhanced transistor-buffered triodes, you must accept the reduced mass and leaner tonality which accompanied them. It's about degrees. How much or little of this particular action does the rest of our gear already do; or not? By seasoning with strategic hardware matching, we influence our virtual microphones. Do they hover right above the piano's strings to capture their most dynamic directness before venue acoustics overlay it? Do we put them in the first audience seats? Do we mix in the latter feed? By how much? This is all about aural aesthetics. No matter our system's calibration, we invariably give up something to gain something else. The art lies in finding our personal mix where gains far outweigh losses; where each quality we value is balanced just so against others we value equally.

Personally, I'm music not sound first. I collect software for its musical not sonic virtues. If there are multiple choices of the same music as there are with classical, I'll invariably pick the interpretation I most fancy. That means plenty of lesser productions which err on the side of full-frontal explicitness. Think etch and just a bit threadbare. Now some sheer gauze and filler heals it. The upstairs system as set up just then had plenty of raw resolution. This welcomed the MZ3's beyond-Nagra injections. I enjoyed them more than focus on the small change it cost me in speed, immediacy and micro detail. Take "Rugaciune" from Roberto de Brasov's Le Swing de Carpates for moody Transylvanian Blues. Wait until the vocals kick in. If those don't boil your blood, best check your pacemaker. And, let's agree that production values aren't the highest. The MZ3 was thus perfectly poised to enhance my listening pleasure.

If after "Rugaciune" you're ready for the long line of this Balkan shuffling powder, set aside 20 minutes and inhale deeply here for the full dose of freewheeling "Multzumesc doamne". It translates as thank you, ladies. Curious? Back to earth, we'd say that Nagra's overall voicing was 90% solid state. For those who want more tube action to move deeper into the ambient far field's contributions, it plainly won't be sufficient. It's dosed too modern/neutral and moderate. Hello LTA's 12SN7. A shift into richer reverb hangs connective tissue into starker emptier space to be more obvious. It does so without incurring undue friction as that wade-through-water drag which resists musical flow when there's too much of it.

I'd thus give the MZ3 another 10 points of valve sound over our Nagra. It won't have your ears wonder where the tubes are or what they're doing. It thus also caters to the quintessential 'old fogey' archetype which has aged lonely audiophiles listen to sultry female Jazz vocals like Jeri Brown's—here with Roberto de Brasov in the bridge—whilst praying "make this old man happy, doll".