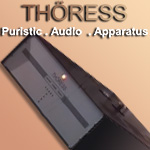 Where else could one motor for 6SN7-fueled preamplifiers? Models I've seen mentioned include AtmaSphere's MP-3 Mk3.3, Canary's CA-906, Cary's SLP-98, deHavilland's UltraVerve, Ekco's EVH, Schiit's Freya+, various Supratek, the Thöress and Wyetech Jade. With big American valve audio houses, one hits 6H30P with ARC and BAT, 12AX7 or 6922 with Conrad Johnson, 7044 with Manley, 12AX7 or 6H30 with Rogue, 12AU7 and 12AT7 with VTL. In my review of his hybrids, Reinhard Thöress called out their GJ5GT as 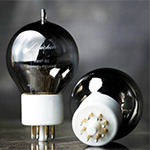 "among the most linear vacuum tubes ever made. The 6J5GT is a very old indirectly heated triode. It belongs to the xSN7 family of the 6SN7GT, 12SNGT, 6J5, 6J5GT, 12J5, 7N7GT etc. It's half a 6SN7GT double triode. These all-purpose medium-mu triodes with a gain of 20, transconductance of 2.5mA/V and internal resistance of 7'200Ω were designed when space and energy savings were no consideration.

"A 6SN7GT consumes 6.3V x 0.6A = 3.8 watts of heating power, twice what a more 'modern' ECC82 double triode runs which itself is a kind of miniaturized 6SN7GT with almost the same characteristics. But it's exactly this 'wasteful' energy consumption which gives it a generous emission from a large cathode. And that leads to the exceptional linearity of these xSN7 triodes. It's a fact generally accepted among experts and frequently confirmed by measurements. For instance, see Morgan Jones' book Valve Amplifiers for one good reference. It's not just a bit more linear than other medium-mu triodes. The difference is drastic. So it's no wonder that the xSN7 family tubes were heavily employed for high-fidelity audio amplification in the early times of audio."

Or as designer Kara deHavilland put it, "our 6SN7 give you what in tube lore is described as big tone. It's something you can't get with nine-pin miniature tubes as found in most preamps. 12AX7 or 6922 just can't get there." Equally opinionated about it is Mick Maloney of Supratek. "In my opinion the 6SN7 tube is the finest preamp tube ever built. In a good circuit design it can do everything to sound very focused yet musical. It can be engineered to have a very low output impedance that will drive any power amp. It's the finest tube for 3D imaging and soundstaging. I've been using 6SN7 for 40 years and it's still my favorite preamp tube. Other indirectly heated triodes I've used which don't equal it are, in no particular order, 12AU7,12AX7, 12AT7, 6072, 6BL7, 6BX7, 6BQ7, 5687,ECC88, 6922, 6H30 and about a hundred others. The 6SN7 is the grandmaster of audio preamp tubes." When Vinnie Rossi decided to downscale his grounded-grid DHT stage in the integrated to hit a lower price point with a simpler model, he explained that "the L2i's gain stage incorporates a single pair of octal 6SN7 small triodes instead of inferior 12AX7/6922 types. The 6SN7 with its beefier plate structure is tonally far more sophisticated and our top choice when DHTs are too costly."

Current production sources for 6SN7 include ElectroHarmonix, JJ, New Sensor, Psvane [dome types above], Shuguang Western Electric reissues, Sophia Electric, Tianjin aka FullMusic and TungSol. Vintage suppliers of 12SN7 included Amperex, General Electric, Marconi, Mullard, Osram, Raytheon, RCA, Sylvania, TungSol and Western Union. LTA's favorites are TungSol black glass. On how their MZ2 and MZ3 models compare, a Twittering Machines review said the MZ3's "noise floor is lower, the image larger and the tonal integrity solidified." For Herb Reichert's opinion about LTA's Z10e, he called it "a uniquely conceived product that brings a kind of wabi-cha style of simple 'artistic inclination' to the culture of headphone listening… The Z10e's purpose is to serve the newest breed of audiophiles: headphone devotees. People like me who regard headphone listening as a kind of sacred solitude. People who appreciate the engineering beauty of full-rang, low-distortion transducers. People who collect and cherish headphones for their ability to reveal what room speakers cannot." At this juncture, the door bell rang. 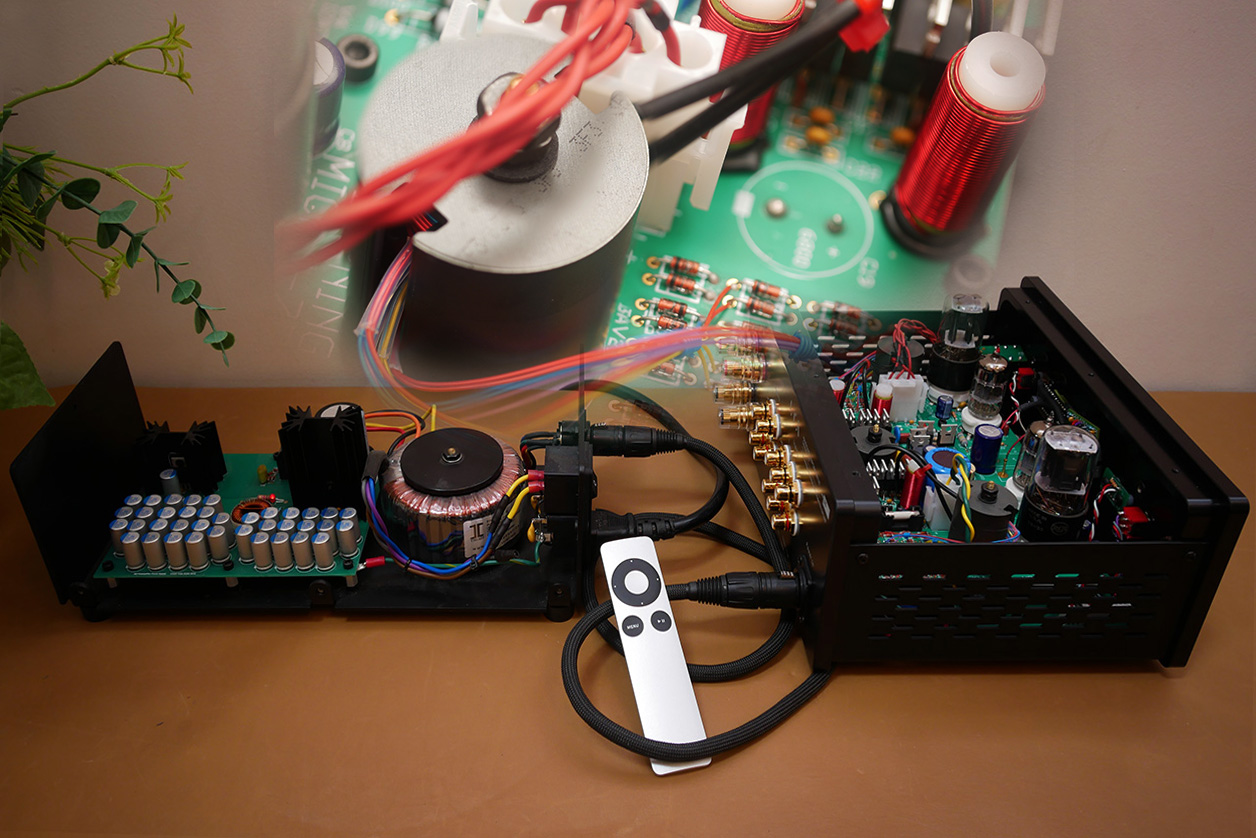 The power umbilical terminates in locking XLR4 on either end.

Under the hood of the power supply, one finds a Triadmagnetics toroidal transformer with 2x12V/100VA outputs, two voltage regulators in chimney-style heat sinks, 41 x 2'200uF/16V small capacitors and one 22'000uF/35V Rubycon PET capacitor. 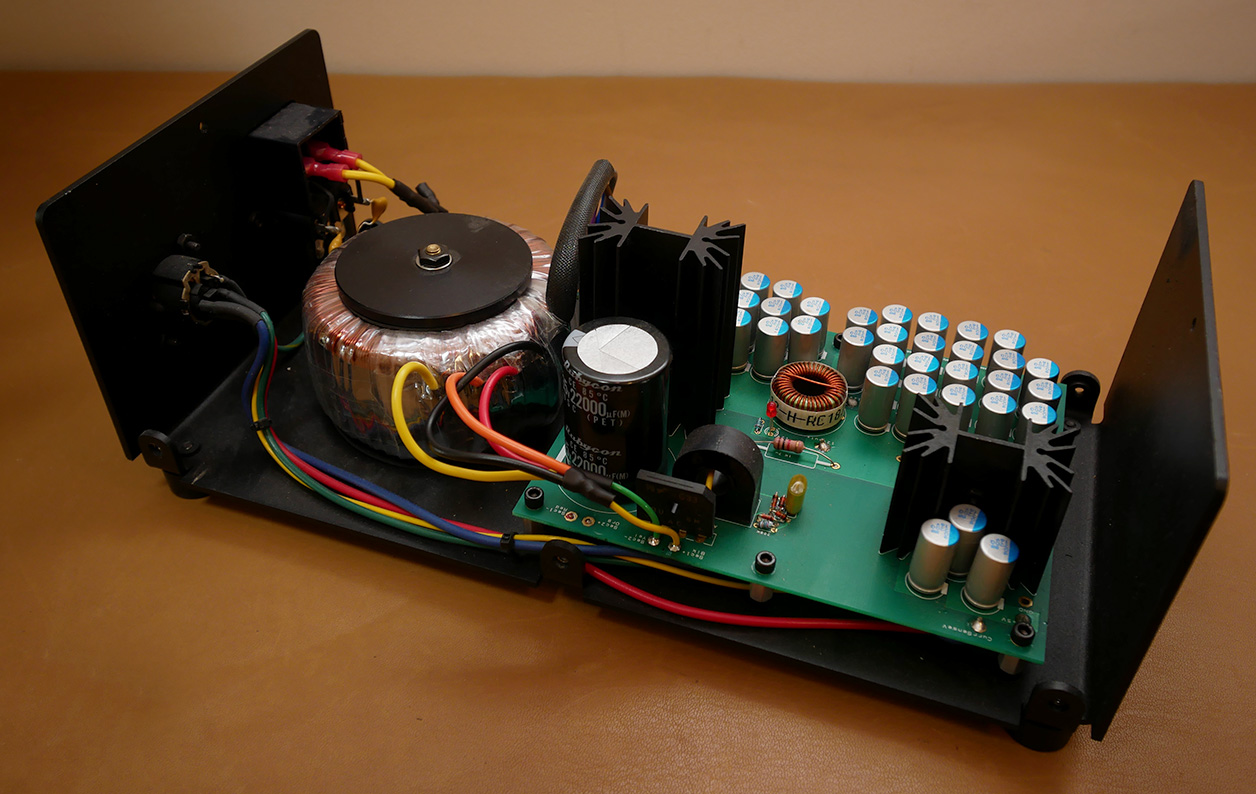