Considering my wallet, a brief fling seemed safer. Must resist. The owner's manual speaks of "delivering superiority and authority not to be found in lesser creations due to the high current capability [±50A – Ed.] and operating speed. Clever construction techniques enabled us to build an amplifier with high packing density, consequently making the signal and power paths extremely short." And, standby draw is just ½ watt so flicking the power mains on the back isn't required. Just turn off with the front switch. And, here 1.2Vrms input sensitivity meets 28.9dB voltage gain. That had my passive-magnetic autoformer preamp sit at 30-40dB below unity gain of 4.4Vrms balanced. In almost all installations, active preamp gain will probably never be required. Stealing two words from Ivo because they're so true, Händel's sound does show superior authority. By now you should know what that sounds like. Inky blackness. Bedrock bass. Intense contrast. Lucid darkness. Accelerated dynamic shifts. More on those next. 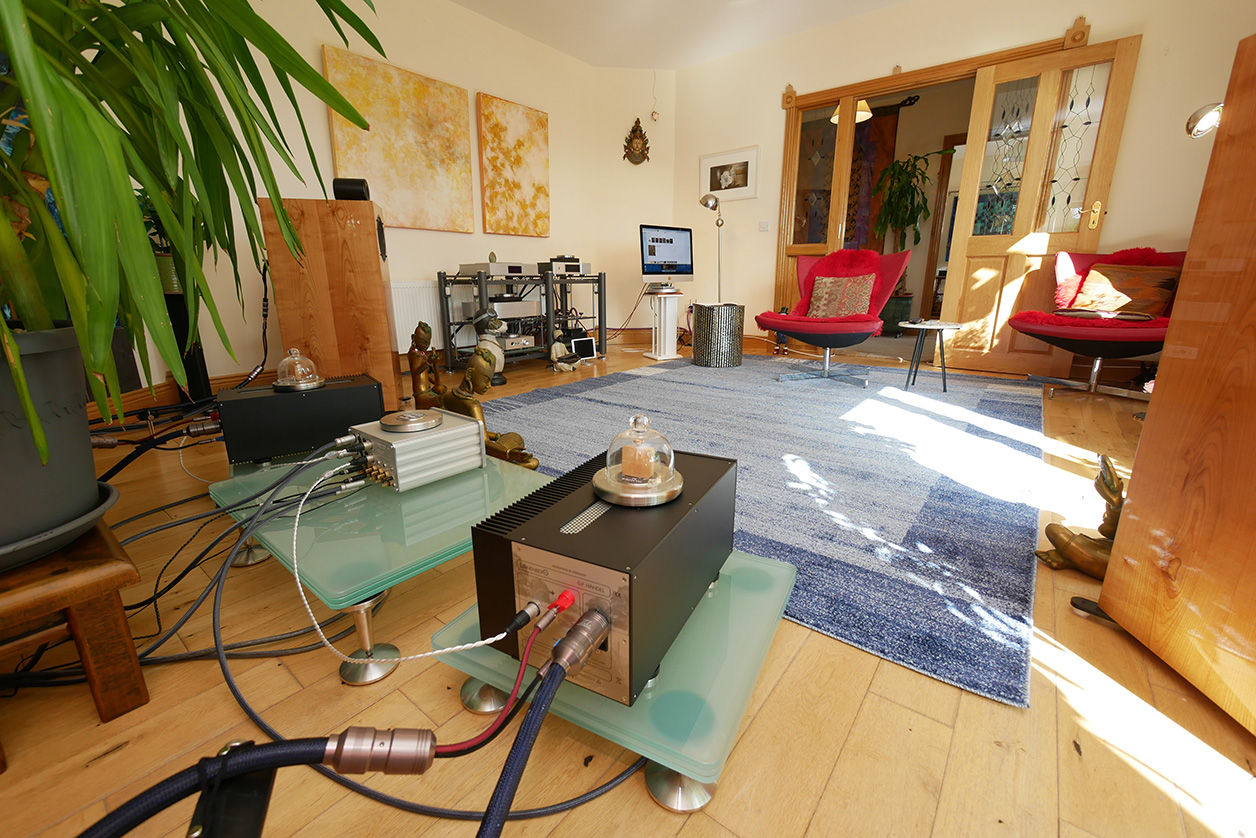 As low-hanging fruit, these Franck Tchang resonators sit beneath floating glass domes so our cat can't get to them.

First some common sense. 93dB peaks at 3 meters are loud. An operatic symphony in a Finland castle never exceeded those in row 1 balcony when I measured. An amplified Andreas Vollenweider gig at the Montreux Jazz Festival never did when I stood behind the sound engineer's console to see his big SPL meter. With our 95dB French speakers, one watt of listening power thus ought to do. But there's more to dynamics than just loudness per se. Music's energy lives on dynamic contrasts. It's not wall-of-sound sameness which won't deflect the needle past a 6dB wiggle room. It's the 50 decibels of true range which a Tony Minassian records to standard 16-bit/44.1kHz CD. Sadly even superior productions routinely max out at 15-20dB. Now we want a magnifying glass on those fluctuations. Instead of rigid and stale because loudness is constant or barely changing (yawn), music gets alive like a fish wiggling to escape. Here power and speed matter. Power seems to reflect as a ratio. The higher the ratio of applied power to small quivers of signal voltages, the more those may pronunciate. Equally (or possibly more?) germane to this is how fast a given amplifier reacts to tiny voltage squiggles lest those be over before it notices. Clearly not all power supplies are equally fast when this dynamic tracking differs audibly and quite independent of raw power specs. A 250-watt amp can be dynamically less lively than a 50-watter. A common comment is that bigger amps sound more ponderous than their smaller brethren. Here Ivo's switch-mode supply of reduced capacitive needs is likely a good bit faster than the norm of equivalent linear supplies with bigger storage caps and bigger noisier iron. If so, it'd explain Händel's dynamic twitchiness as a happy confluence of very low noise, high output current, low impedance and a very quick responsive power supply.

Back at my ears so away from plausible theories, intrinsic to Händel's lucidity as embedded in this darker gravitationally heavier milieu was microdynamic enthusiasm. Hi-rez audio freaks get most freaky about detail. It's perhaps best paraphrased by an introductory boast Lloyd Walker once issued over the phone. "My turntable is so resolved, it can tell which leg is arthritic on a fly that just landed on its cartridge". That gets at counting 1st violin chairs, the rustle of a score flip and other supposed tokens of high-end playback. How many audiophiles get equally freaky over dynamic magnification power? It's not about arthritic fly legs we've never heard before. It's about more expressive inflections that underpin the exact same detail we've always heard. It's where gifted musicians labor hardest. Playing the right notes at the right time is just the start. Imbuing any sequence of notes with a dynamic message that subdivides a bigger arc into dynamic micro shifts… that's where true artists transcend those flashy virtuosi whose main concern is still with technique and how many notes they can cram into a bar. 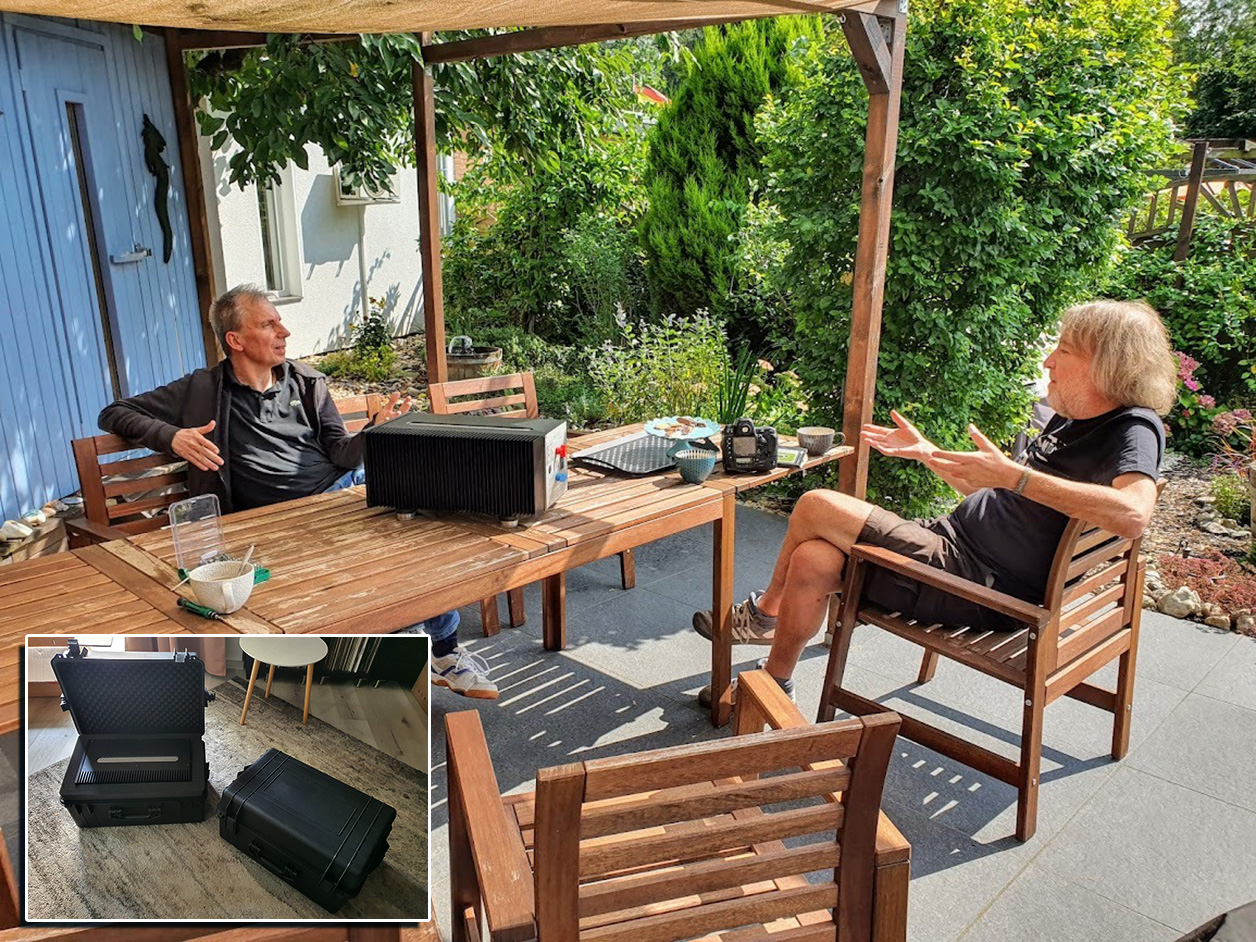 Ivo Linnenberg and Holker Barske of the eponymous blog, my review loaners still at LEN Hifi's in the insert.

Beyond technique comes expressive spontaneity. Its two key ingredients are tone modulations (including vibrato intensity or absence) and dynamic gradations. On the latter, Händel went farther than the norm. A side benefit was being able to play more subdued whilst being well out of first gear already. What prompts us to raise the volume is often a perceived lack of feeling talked to. When music doesn't speak to us, it soon registers as undesirable noise. It takes up space but doesn't relate to us. When music communicates—reviewers invoke "the artists' meaning" as though they were mind readers—we become part rather than stand apart. Should that happen at already lower SPL because despite a narrower 0-100 window, there are more in-between values or finer dynamic gradients for more liveliness from loudness variability, we cause less sound leakage. That equals less annoyance in innocent bystanders. We enjoy more, they suffer less. It's a classic win/win. On the tone modulation score, our own amps and their greater treble energies did more. Here I thought that Händel's relative darkness played somewhat against maximized timbre variations from shifted overtone ratios. In very primitive terms, this difference was between subs and super tweeters. Kinki's EX-B7 bolted on the latter, Händel the former. It overwrites for emphasis but catches the gist. Which flavor is your poison? For me, greater dynamic emphasis and a bottom-up perspective seemingly bolted to a room's concrete foundation speak more directly to the gut. More holographic soundstaging and airier spaciousness aim at the inner eye. One feels more, the other observes more. Those are two different approaches, two different listening modes. The absolute sound doesn't factor in any of it. As to other absolutes, total harmonic distortion is 0.002% measured at 20w/1kHz/8Ω and still below 0.01% at a worst-case 200w/20kHz/2Ω.