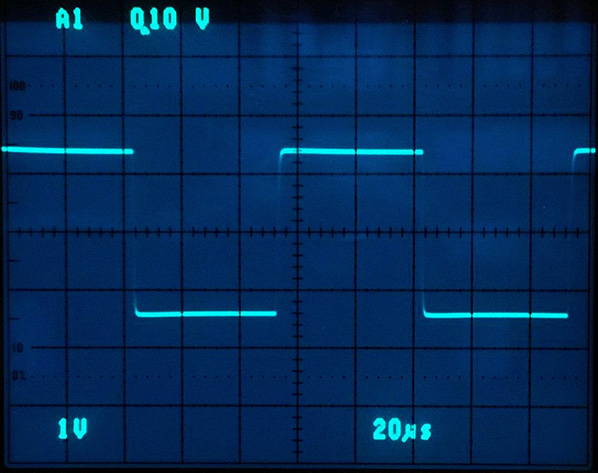 Händel's handle. "Please find attached a file containing all relevant preliminary data for the upcoming design. I always try to make my data as compatible with John Atkinson's Stereophile conventions as possible. That helps the reader and prospective customer to make valid comparisons and hopefully educated decisions.

"By sheer coincidence, there's a recent YouTube video by him on measuring hifi gear.  That's suits me because in the first 20 minutes someone else explains why audio gear should work properly and that only measurements can reveal design flaws. He also explains what measurements cannot do.

"I've now done audio for 40 years, thirty of those as a professional. I learnt over the years that just listening to a piece of audio gear can create inconsistent results. We're humans and Mother Nature gave us a valuable feature to cope with excessive information. We thus pre-process all incoming data.

"We do this not only with our hearing but all our senses. The optical illusion is a fine example for what our brain can do to us. In audio, pre-processing or personal bias makes it difficult if not impossible to offer anything to a customer whose mind isn't already open to new experiences. Some hard facts like measurements may then help if only on a rational level."

Bandwidth covers 20Hz-20kHz with just ±0.02dB deviation. Looking beyond that nets 0Hz-400kHz with Ivo's i/o filters, 0Hz-1MHz without them.

Given such stout class A power with excellent low-impedance stability, how physically big would Herr Händel have to grow to not break into an undue sweat? As the surviving paintings and sculptures of him show, at the peak of his popularity our august composer didn't exactly look like he had missed many a meal. How about the amplifiers named after him? How much bristling heat sinking would they have to wear to get this job done?

"No worries, Händel will inhabit exactly the same dimensions as die Herren Bach und Telemann. That's part of the game. I wanted a product which the many Liszt fans can accept. Surely it is bigger and heavier but new power supply techniques enabled me to reduce the form factor. Furthermore, you must have noticed that 8Ω power is nearly half of Liszt to reduce total power dissipation although quiescent bias current is way higher. The drastically lower distortion into low impedances and/or high frequencies is what I looked for, not fancy monumental sculptures needing at least two persons to move." 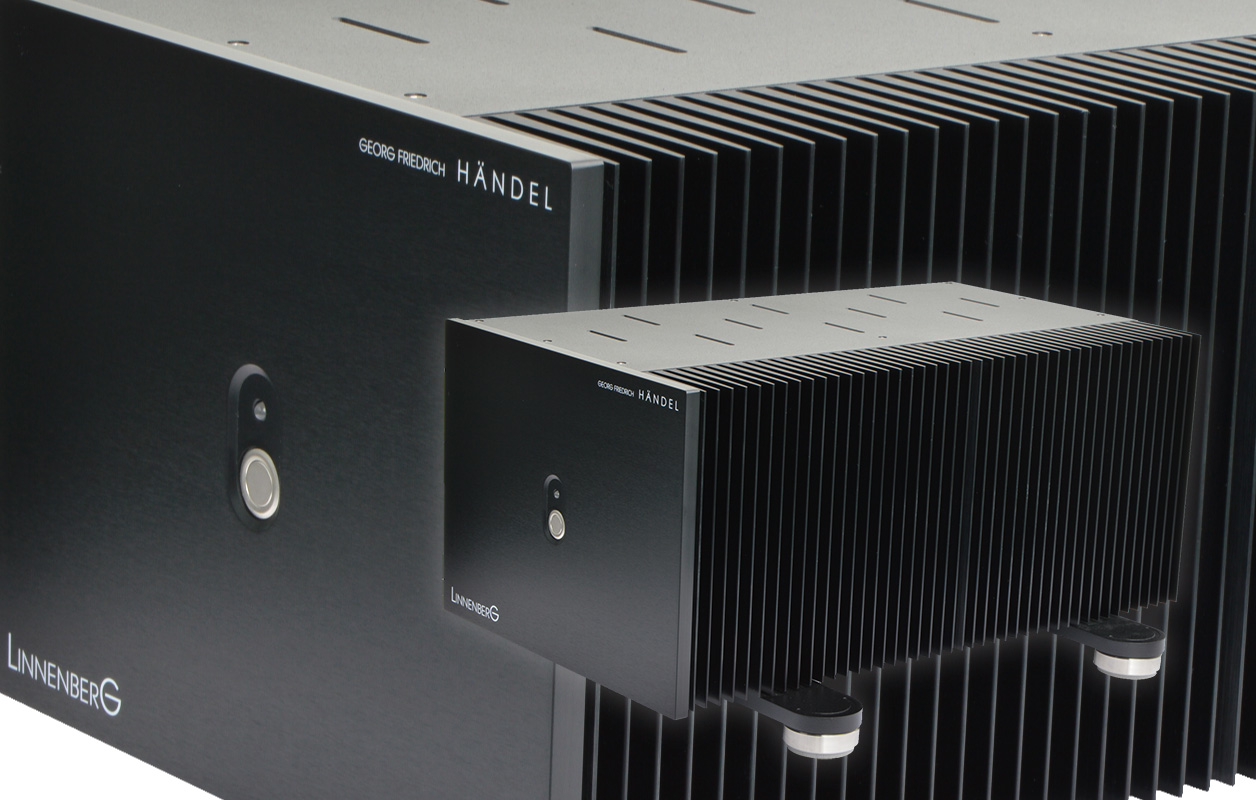 That means friendly dimensions of just 25x21x43cm WxHxD. Händel on a fast or as a young man but still seeing double? There's worse things than being two of yourself. Just imagine all the mischief you could get yourself into with a true alter ego. If you're a loudspeaker, you always have a Doppelgänger, ideally a perfectly identical twin. Now having an amp to yourself means that your power supply can't see what the other channel is up to so remains independent. Particularly with dense challenging music, that usually improves stereo imaging by eliminating cross talk because the channels can't mutually load each other. It does require two power cords but then reduces individual size and weight over the equivalent dual-mono stereo amplifier. 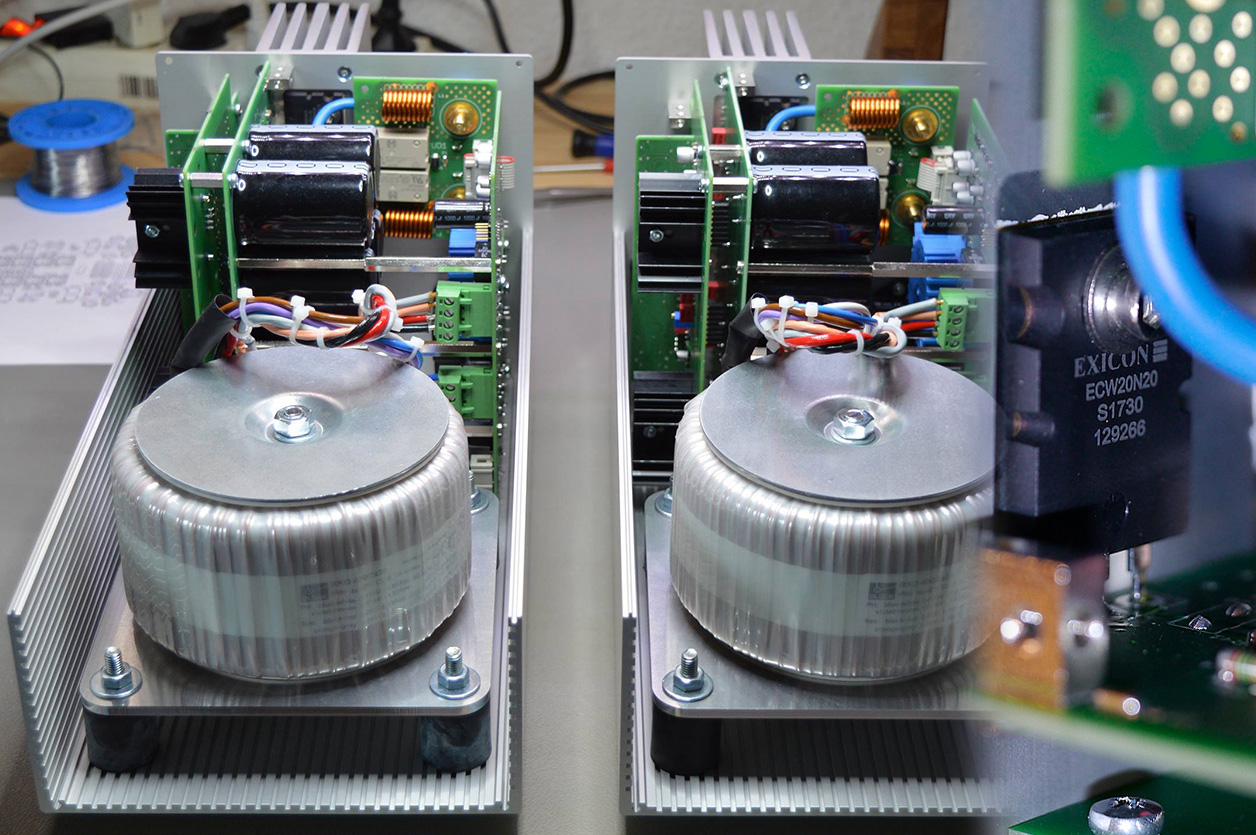 The Liszt monos had a far smaller rear-facing heat shink but like all LinnenberG circuits, a tightly packed three-dimensional layout. As we see next, that solution for shorter signal paths is also practiced by luminaries like Audio Note Japan shown here with their 50-watt 62kg Kondo Kagura 2 parallel single-ended 211 mono.

Back at LinnenberG, "our motto is to make every single spec at least 10 times better than what is actually required. A working Händel prototype is out in the field and things after the pandemic peaks are recovering slowly. Generally though, everything related to the parts supply chain is very much behind. The outrigger feet may or may not end up in standard production. Some minor tweaks are in the making, too. The Telemann, Bach and Händel series is by far the most challenging task of my working career. That's because at this price point, no excuses will do. The whole thing must work at 100% perfection both technically and sonically so measured and heard. Actually that's always the case but everyone in our industry knows that a highly developed audio component is a very complex structure like a car, just smaller. That said, I don't assume that I can deliver first review samples in the next 2-3 months as planned. All the parts I can get my hands on will end up in units of eagerly waiting customers." That was the status June 24th. It reflected feedback from elsewhere. The semiconductor industry was only slowly recovering. Hifi makers relying on its many ICs and transistors were being very seriously delayed.