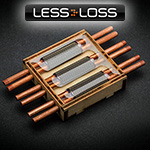 Add a zero. That's the new LessLoss Firewall 640X, a latest-gen refinement on their 64X inline filter/conditioner for power cords. It borrows tech from their awarded Firewall for Loudspeakers and their Entropic Process of accelerated aging aka burn-in. The new zero behind the 64 reflects "coming ever closer to zero loss" whilst the LessLoss name and price remain unchanged. No extra zero there. The oak case hides potted Firewall modules for hot, neutral and ground [below] which present as 20mm² of specialty copper each so there's no current limitation. One ideal use for a single 640X unit would be at the far end of the power cord that feeds your power distributor. Now its noise-filtering action benefits all components at once. "Our pure copper rods situate such that live and neutral connections are made directly to the internal ends of the over-engineered pins of our IEC C14 inlet. These pins are solid copper and directly gold plated. The module itself glues to the wood housing for maximal micro vibration absorption. The use of 100% clear epoxy resin guarantees zero coloration as the surrounding electromagnetic field permeates the housing of the conductive rods. The Firewall elements themselves are created under precise control by advanced 3D additive laser sintering. They are the only element which conditions the power. Also shown above are our translucent inserts for both ends of the Firewall elements. These have glass-like dielectric properties and are precision formed by advanced 3D laser printing for precise alignment. At the same time, the electric and magnetic interaction of copper and Firewall element is controlled to very tight tolerances."

In short, this is purely passive power conditioning without caps, coils, resistors or crystalline powders to instead exploit the company's massively surface-enlarged copper as those finned centers of their bespoke potted module.

As reported in these pages before, Sven Boenicke of the eponymous speaker house and Martin Gateley of sound|kaos—back side of his Vox 3awf crossover below—have embraced LessLoss Firewall  tech by optionally installing it inside their speakers. That's quite an endorsement of its efficacy. How does it work? A cable manufacturing friend of Martin's has an idea: "I really think that the Firewall units make sense from a Physics perspective. What LessLoss did is exploit the order-of-magnitude frequency difference between the usual sources of noise and the analogue music signal which is almost direct current by contrast. By tremendously increasing the surface area of a portion of their conductor, HF noise experiences an enormously higher resistance than the 'DC' signal to simply dissipate into heat. Clever indeed. Of course they put a large effort into finding a material science lab which could make their nano-level surface structures." Now the same tech can 'bolt' onto component or power distributor AC inputs. This follows the mandate that in high-performance hifi, noise is public enemy N°1. That's because it's not signal; overlays the signal's quietest parts; and can cause 'intermodulation' effects with component parts and circuits despite being far out of band. With UHF pollution from cellphone towers, switching power supplies and wireless protocols aka electro smog escalating, noise is virtually everywhere. That definitely includes our AC and signal cabling.